Notre-Dame Cathedral: What a Difference a Day Makes 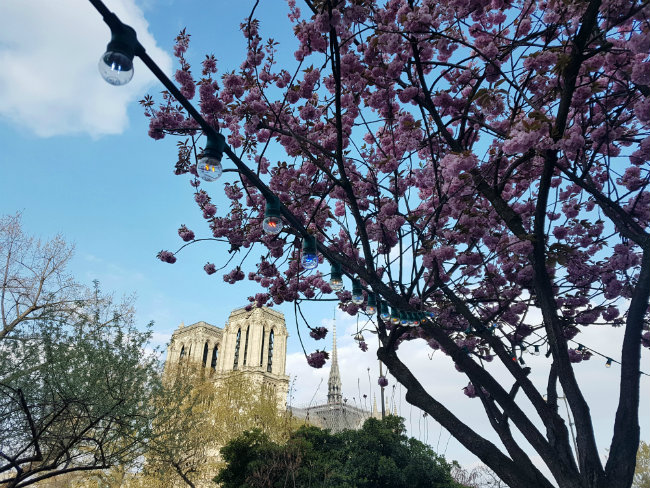 Following the devastating fire at Notre-Dame, France Today contributor Caroline Harrap recalls her visit to the cathedral just the evening before – when she paused to enjoy the picturesque view through the spring blossom

What a difference a day makes, as the saying goes. Just hours before, it had been a beautiful spring Sunday evening – the kind where it feels like summer not only in the light but also in the shade, to turn Dickens’ well-known quote on its head. The city was abuzz with the sense of the new season.

For our part, we had stood in the picturesque penumbra outside Shakespeare and Company, the Left-Bank literary institution so beloved by anglophones, and paused a moment to take in the view. On one side of us, flanked by the usual throng of people, was the early 17th-century building of the renowned bookshop; on the other, framed by the densely-packed pink blossoms, the familiar silhouette of Notre-Dame.

It’s a scene we must have surveyed a thousand times and yet, on this occasion, something made us stop and stare a little longer. Perhaps it was the way the delicate blooms appeared almost to encircle the distinctive spire; maybe it was that soft spring light, for which Paris is so renowned, casting its warm glow over the twin Gothic towers; or it could just have been the rich musical timbre of the bells as they rang out to mark the ensuing mass.

Whatever the reason for our lingering, it most definitely wasn’t the thought that this might be the last time we would witness any of these things.

When we received the first message, exactly 24 hours later, that something was wrong at Notre-Dame, our first reaction was the sinking fear of another terrorist attack. So, ironically, when it turned out to be a fire, it almost came as a relief. But not for long.

Religious or not, it was impossible not to be moved by the sickening sight of the flames taking hold of this medieval masterpiece right at the very heart of Paris. First, we watched aghast as the ancient oak beams, which had survived everything from the French Revolution to two World Wars, turned to ash. Then, moments later, we saw the iconic central spire come crashing down – albeit a more recent addition, dating from the 1800s, but still as much a part of the Paris skyline as the Eiffel Tower.

It seemed incomprehensible that something so much a part of the fabric of this great city could ever be taken away. Yet, here we were watching it crumble before our eyes.

However, it wasn’t just the historical importance of the building, for which we mourned, but also our own personal connections to the place. We all have our own special memory of Notre-Dame – gazing at the renowned rose windows in all their kaleidoscopic wonder; hearing the angelic strains of a Gregorian chant drifting out the door; admiring the grimacing gargoyles that had stood guard for centuries. For me, like many others, it was also the comfort drawn from lighting a candle for a dearly-departed loved one – in my case for my own father.

As I write, we now know that the main structure has survived largely intact, most of its relics have been safely retrieved and our city’s beloved cathedral will be restored to its former glory. But, for the time-being at least, it remains shrouded in scorch marks, the towers stand starkly against leaden skies and that lofty spire – which in my own memory will forever remain surrounded by cherry blossom – is no longer a part of our skyline. What a difference a day makes. 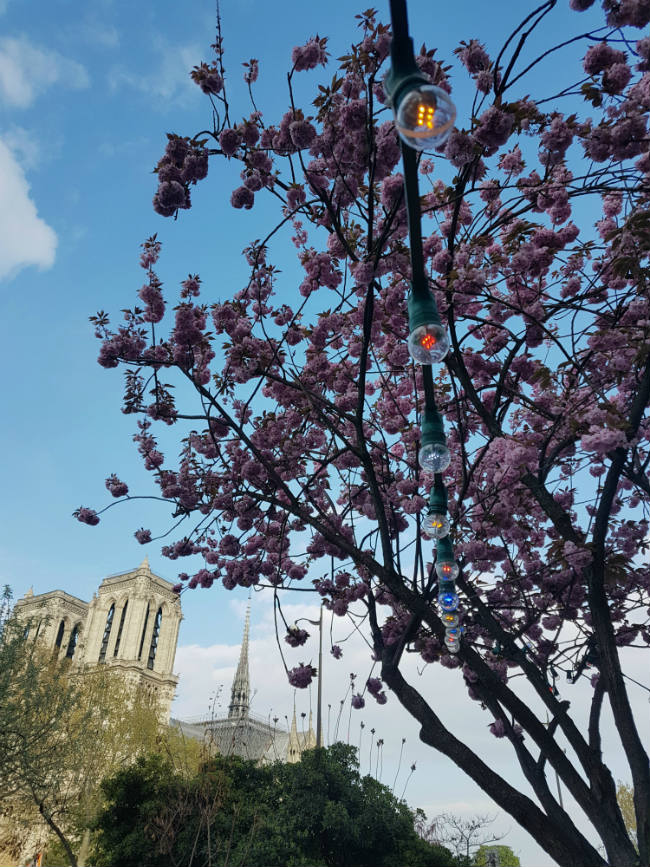 Another view of Notre-Dame just 24 hours before the blaze. Photo: Caroline Harrap

Previous Article 10 Reasons to Visit Tours, the Gateway to the Loire Valley
Next Article Barrière in Cannes: Hot Hotels for the Famous Film Festival