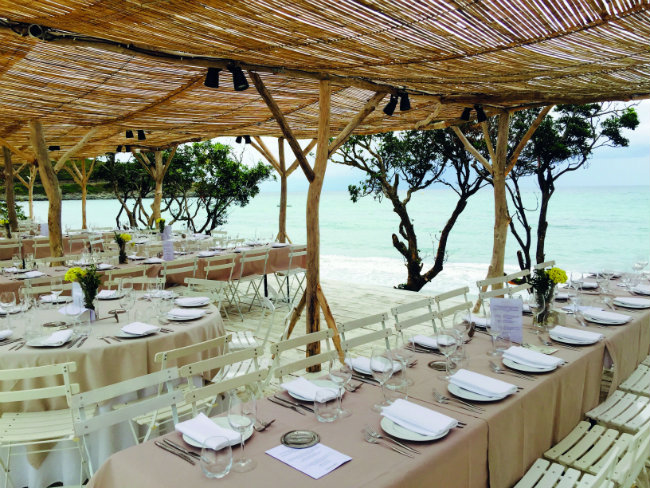 Formerly known as the Hotel Caribou and a favourite jet-set hideaway during les trente glorieuses (as the French call the boom years of the post-war period), this seaside property on the finger-like northern tip of Corsica known as Le Cap Corse has just been entirely renovated into one of the most glamorous addresses on the island. Set above the beautiful road that hugs the seaside all around this magnificent peninsula, the hotel takes its inspiration from Latin American colonial architecture, which curiously enough is a common local idiom. This is because there was major emigration from the Cap Corse to Puerto Rico, Cuba, Mexico and other Spanish-speaking countries in the New World, and when the émigrés returned home with the wealth made from their coffee or sugar plantations, they built houses in the style of those they’d lived in there.

A striking white building with recessed terraces offering superb views of the sea, the hotel has two restaurants: A Spartera, a casual beach club restaurant where you dine in the dappled shade of open-air cane-roofed cabanas at tables set in the sand; and Tra di Noi, an elegant, airy gastronomic restaurant that’s only open in the evening. Both are under the supervision of young chef Clément Collet, who previously cooked at the Eden Rock in Saint Barthélémy, La Réserve de Beaulieu on the Riviera and with Hélène Darroze at the Connaught in London.

The sea view at Misíncu

During a recent stay, lunch at the beach club was just perfect, because they serve exactly the kind of simple, but good-quality, produce-centric cooking you want to eat on holiday in a sunny place. We started with an excellent vitello tonnato – cold roast veal with tuna sauce and caper berries – and baby squid with piquillo peppers, and then shared a locally caught loup de mer – sea bass.

At dinner, Clément continued his delicious obsession with serving dishes made from the best local, seasonal produce, including an excellent starter of a coddled egg with prisuttu – Corsican ham – fava beans and morel mushrooms, and then two excellent mains, turbot with baby peas and onions seasoned with nepita – the wild mint that grows all over Corsica – and lamb with brocciu – a soft Corsican curd cheese– Swiss chard and black garlic.

The Corsican cheese plate was the ideal way to end this meal, since the island produces so many wonderful cheeses that rarely reach the mainland. The wine list features an excellent selection of Corsican wines, service is eager and obliging, and the views from the terrace, with the island of Elba in the distance, are spectacular. 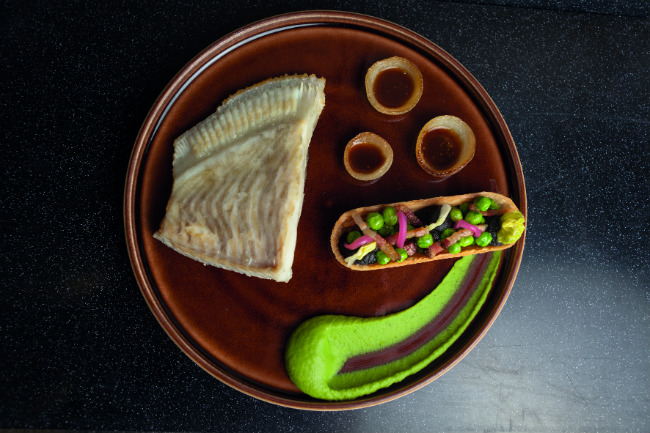 Previous Article Verity Smith and a Blind Girl’s Dream: Olympic Gold for France
Next Article Spotlight on Joan Miró at the Grand Palais in Paris