The Marais Poitevin: A Glimpse of France’s “Green Venice” 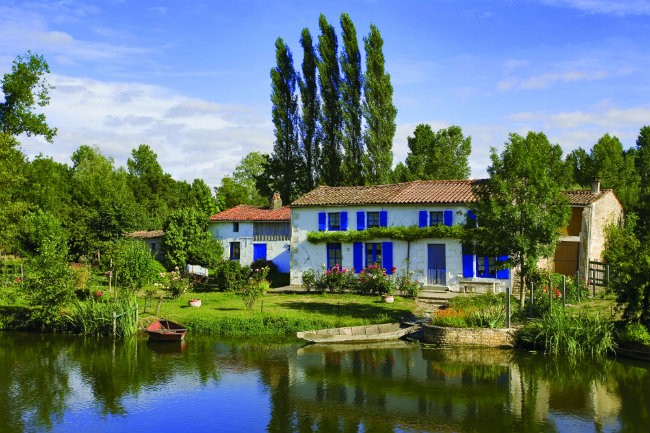 During May, the Marais Poitevin and the marshland known as ‘Green Venice’ is splashed with vibrant colour – there are fields of scarlet poppies, swathes of white blooms along the verges and the sparkling waters are fringed with yellow irises. This rainbow burst of colour surprises many first-time visitors, who arrive in the area expecting multiple shades of green. However, the classic ‘Green Venice’ topography of shady pastures bisected by quiet canals is just one of three contrasting landscapes that, together, create France’s largest wetland landscape outside the Camargue.

Tucked in behind the French Atlantic coast, an hour’s drive north of La Rochelle, this magical marshland straddles the Sèvre-Niortaise river, from Niort in the east to the sea. Classified among the elite group of Grands Sites de France, its name reflects the historical region of Poitou, but modern political boundaries mean that today it’s shared between the Charente-Maritime and Deux-Sèvres départements of Poitou-Charentes (Nouvelle-Aquitaine) and the Vendée in the Pays de la Loire. 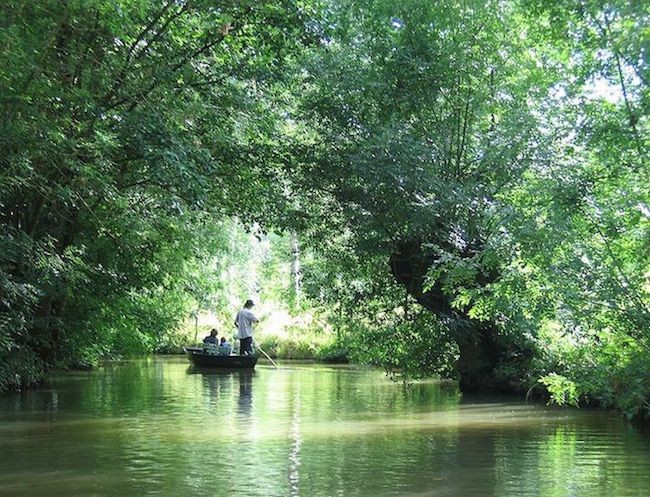 The Marais Poitevin, an inner canal seen from a flatboat. Photo: Wikipedia, Gilbert Bochenek (CC BY 1.0)

The popular view of ‘Green Venice’ reflects the lush area of fenland known as the Marais Mouillé or Wet Marsh, a patchwork of small cattle pastures which are divided by waterways and fringed with tall trees. In summer, the canals are covered with the tiny green leaves of water plants, but the first time I took a tour in a traditional flat-bottomed boat, the golden leaves of autumn were fluttering leisurely down through the sunbeams.

Simple punts have ferried men and materials through the marshland since the Middle Ages. As my boatman propelled the punt along the area’s tranquil canals, I sat back beneath the canopy of gilt-edged foliage, to enjoy an eye-level view of wetland wildlife – two deer bounding through a cattle meadow; a coot clucking noisily among the reeds; and, my absolute favourite, the whiskered face of a coypu paddling off on urgent business.

This is an area where local residents work to the rhythm of the seasons. And as I listened to my guide describing the fresh greens of spring and the ‘White Marsh’ days of winter, during which the fields can disappear beneath flood waters, I vowed to return and experience the magic of the marsh through the seasons. 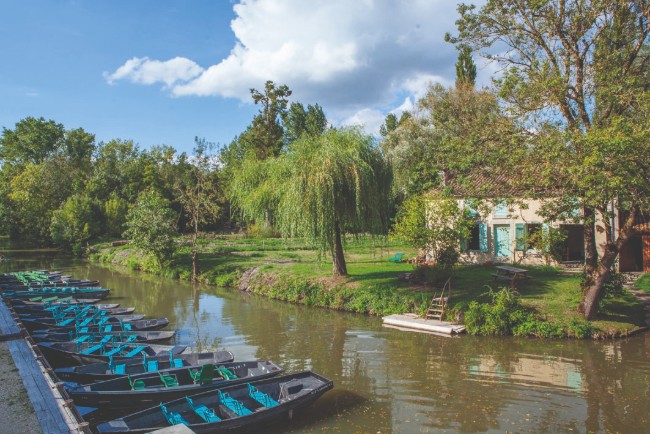 Hire a traditional barque for a punt around the ‘Green Venice’ of the Marais Poitevin. Photo credit: Studio Francis/ CRTNA

Fast forward to May, when a touring holiday through western France offered me the chance to enjoy the Marais in its summer clothes and explore its diverse trio of landscapes. So this time I began at the Baie de l’Aiguillon, a bite-sized indentation in the Atlantic Coast that’s famous for producing mussels on vertical poles or bouchots.

For the full story, you can visit the Maison de Myticulture at Esnandes – one of four themed visitor centres across the marshland. Then stop off at the Port de Pavé, which bustles with the comings and goings of small boats and tractors, as the mussels are brought ashore, to be despatched to retailers and restaurants.

At low tide, the mud flats and salt meadows around the bay provide rich feeding grounds for birds so binocular-toting ‘twitchers’ are a common sight along the shoreline and the across the bay’s protected reserves. 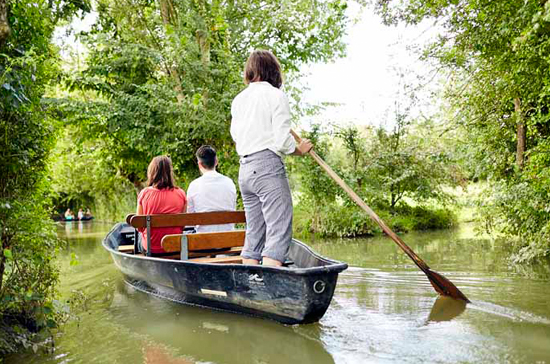 Marais Poitevin. A guided punt around the wetlands is the best way for first-time visitors to discover the area

The coast is also dotted with traditional fishing huts, which sit on stilts and are hung with huge, square nets which are lowered at high tide. Some 10,000 years ago, this area was covered by sea, but as the water receded, Neolithic Man moved in. By the Middle Ages, monks had established abbeys on the high ground and were draining the marshlands for cultivation. Today, the spectacular ruins of the Abbaye de Maillezais and the nearby Église et Abbaye Royale de Nieul-sur-l’Autise provide a graphic representation the medieval church’s wealth and power.

Head inland from the bay and the open landscape of the Marais Desséché or Dry Marsh stretches out in a broad vista of cattle meadows and fields of cereal crops, which are efficiently drained by a carefully-controlled network of sluice gates and canals.

Look out for Baudets de Poitou, an eye-catching breed of large, chocolate-brown donkey with a shaggy style coat. Used for mule breeding since Roman times, Poitous were crossed with heavy horses to provide beasts of burden for agriculture and the two World Wars.

After an initial flurry of reclaimation work during the early Middle Ages, the landscaping of the Marais Poitevin came to a shuddering halt with the Hundred Years War against England, and was subsequently interrupted once again by the French Wars of Religion.

As is its way, nature quickly reclaimed the marshlands, but landscaping began again during the 17th century, when local expertise was boosted by Dutch know-how, and today the fenland boasts a finely balanced ecosystem which owes its very existence to human determination. 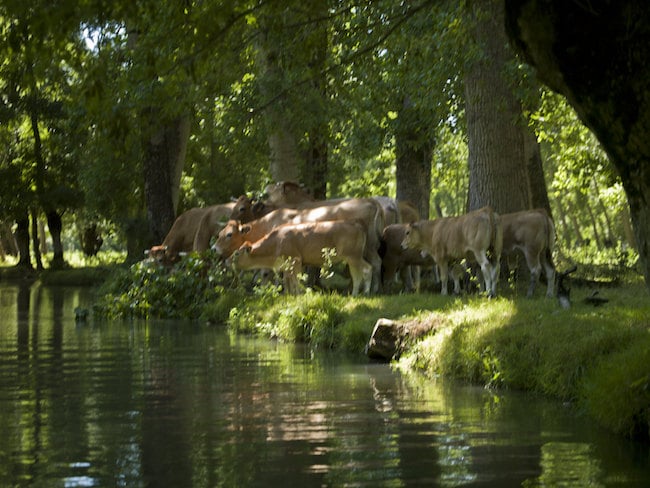 It doesn’t take long to appreciate the enormity of the task of reclaiming the area, as you drive inland from the sparkling blue of the bay through the flower-splashed landscape of the Dry Marsh and into the shady green waterways of the Wet Marsh. Along the way, stop off for a stroll at Marans, the colourful river port on the Sèvre-Niortaise, where you can visit the Église Notre-Dame de l’Assomption, with its ‘see-through’ spire, and take a ride in a punt.

Gondolas were a traditional mode of transport in the Marais Poitevin, right up to the 1960s. Today, they can be hired at jetties all over the Wet Marsh, which offer a choice of ‘self-drive’ and guided group or private excursions. Novices should tap the local knowledge by taking a guided trip, to get an understanding of how life works in the area. For a really special experience – and the best chance of seeing beaucoup wildlife – take an early morning or evening cruise when the canals are at their most tranquil.

Another popular way to explore the Wet Marsh is by bike and there are hire centres in the main tourist centres, such as Coulon, Arçais, Saint-Hilaire-la-Palud and Marans, which offer conventional or power-assisted electric bikes. The area’s country lanes are generally quiet and the off-road tracks are level and well-marked, which make this a great destination for families and keen cyclists alike. 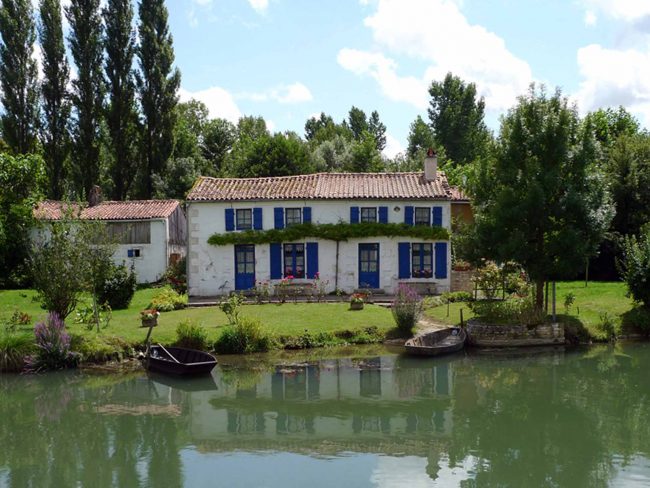 Pretty villages dot the Wet Marsh and the waterways are lined with traditional houses which sport brightly-coloured shutters. Mirror-image reflections provide the ultimate ‘Kodak moment’ on bright, clear days, while early risers are treated to ethereal cushions of mist above the waters.

The area’s residents possess the greatest respect for the environment, a fact that’s celebrated with the Maraisthon, France’s leading ‘eco-marathon’, which is held at Coulon each June. Participants can choose from a 10km run or a guided nature walk of 11km, then enjoy stalls that champion sustainable living and serve local food specialities, such as angelica-flavoured liqueur, tourteau fromager (cheesecake) and Broyé du Poitou butter biscuits.

Visit the Maison du Marais Poitevin in Coulon for an insight into traditional life on the Wet Marsh. You can also check out the Église de la Sainte-Trinité, which boasts an unusual pulpit on its exterior wall that’s shaded by a small roof, and drop in at the old dairy opposite the main car park, which is now the Parc Naturel Régional and home to a farm shop and microbrewery. 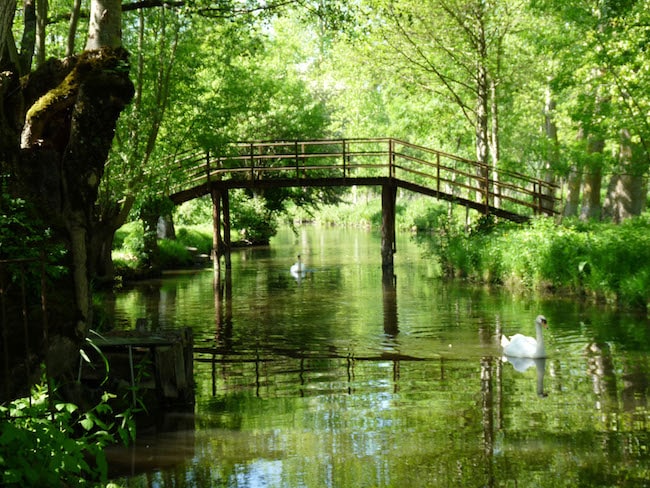 A footbridge over the canal. Photo: Wikipedia, Ji-Elle (CC BY-SA 3.0)

Summer visitors can enjoy a different kind of retail experience at the annual floating market in Le Vanneau, which sees local farmers and growers moor their punts to the banks in a riot of colour and bustle. Should you feel the need for some more conventional retail therapy and perhaps a bit of urban culture, head for Niort, the marshlands’ eastern gateway, or Fontenay-le-Comte to the north. Both are well worth a detour for their historic buildings and heritage sites.

However, it’s the natural history of the Marais Poitevin which draws most visitors back to the peaceful waterways and copious wildlife of this ‘Green Venice’ – it’s an area to be enjoyed over and over again, at any time of year. 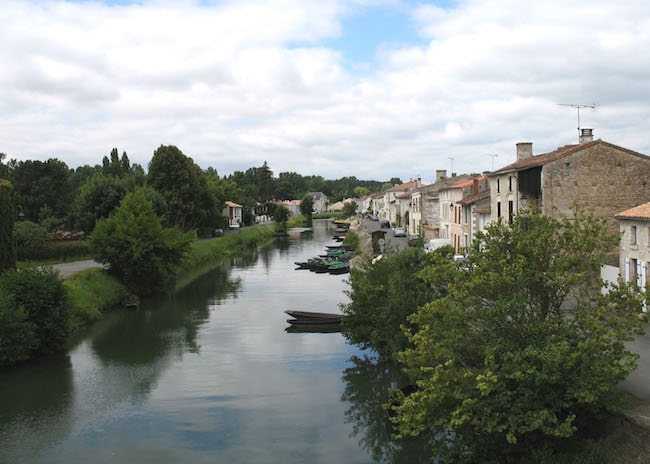 Cross with Brittany Ferries. Fly to La Rochelle with Easyjet or Ryanair. SNCF TGV train from Paris to Niort or La Rochelle.