This mountainous massif in Auvergne-Rhône-Alpes is an outdoor enthusiast’s dream. Discover its many peaks and plateaux, hiking trails, cycle paths and paradisiacal nature reserve…

An isolated body of limestone, spectacularly flat and rectangular, this iconic peak dominates the Trièves mountain range in one of France’s largest nature reserves (more on that later). Ramble through the surrounding meadows and admire the powdery crag from afar, or gear up and tackle its 2,000 metres to be rewarded with a breath-taking panorama and grassy sanctuary at its summit. Not so sure-footed? Don’t fret – there are 30 routes to choose from, catering to a wide range of abilities from complete novices to seasoned mountaineers.

A far cry from the dizzy heights that define Vercors, there’s also an entire underground realm to explore. Discovered in 1897 and opened to the public in 1967, Choranche cave is a natural marvel filled with glittering stalactites and emerald waters, beautifully illuminated in a series of light shows. It’s also home to the ‘proteus’ – a spectral cave-dwelling salamander that goes by many names, including ‘olm’ and ‘human fish’ (owing to its pale pink flesh).

Wrapping around a sheer mountain face overlooking the Cholet Valley, this famous balcony road was originally created (or rather, exploded into life with dynamite) in the 1800s for transporting timber. Today, it’s a major tourist attraction offering a tough physical challenge and astonishing views, including a rare glimpse en route of the orthodox Saint-Antoine monastery. 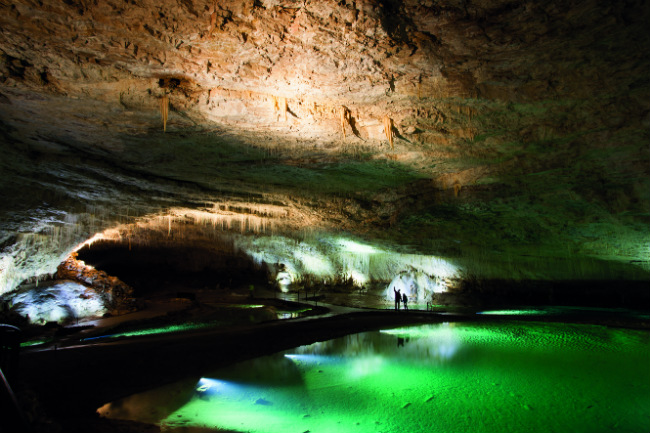 Vercors’s 17,000-hectare park is heaven on Earth for nature lovers. With terrain ranging from mountains to vast meadows and pine forests, all sorts of wildlife can be spotted here, including ibex, black grouse and the elusive bearded vulture. Get acquainted with the area à pied, or try a spot of biking, skiing or horse riding for a different perspective.

What better way to test your mettle than a bridge spanning a chasm, Indiana Jones-style? The Himalayan footbridges of Monteynard provide a dramatic crossing over the Drac and Ebron gorges and their turquoise waters, enabling hikers and bikers to pass between Matheysine and Trièves.

For a taste of local history, wander off the beaten track to this protected 12th- century monument; a charming limestone vision, it marks the crossroads of several routes between Dauphiné and Provence.

The ‘suspended houses’ of Pont-en-Royans wouldn’t be far out of place in a storybook. These pastel dwellings, formerly established to facilitate the area’s booming wood trade, earned this fantastical moniker from their position along the edge of a rock face overlooking the River Bourne.

If you go gaga over architecture, you’ll adore this medieval village and its presiding Gothic abbey. A pit stop for pilgrims on the Santiago de Compostela route, it also offers plenty for tourists, from the permanent heritage museum to fairs, festivals and Christmas markets throughout the year.

Slicing through the Vercors nature reserve, this 50km cycle trail offers a pleasant ride between the five Plateau villages. Each stretch is punctuated with rest areas, and there are opportunities to check in with local producers and sample the terroir.

Extending between the Col Vert and the Pas de l’Oeille, the Arêtes du Gerbier have borne witness to critical moments in history, from the ancient Alpine uplift that formed them to the tragic death of post-war climber Lionel Terray. These jagged limestone ridges remain a popular climbing site today.

Previous Article A Quest for “Black Diamonds” at Lalbenque Truffle Market in Quercy
Next Article Life is a Cabaret: Discover the World of Parisian Cabaret