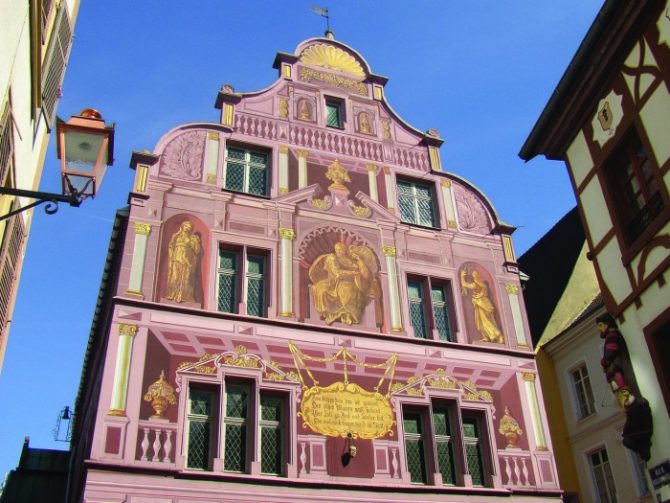 The idea of a cross-border commute sounded pretty exciting to me, but for Patrick Polansky, a resident of Mulhouse in the south of Alsace, it was nothing out of the ordinary – when you live within minutes of two other countries, the world is your oyster… everyone’s doing it! Somehow, Patrick still found time to show me around the city he calls home.

Mulhouse has joined the Global Greeter Network, which brings together local residents (greeters) with tourists looking to explore their new surroundings in a slightly less conventional way. The greeters aren’t paid for what they do and don’t accept tips, they simply like to meet new people and luckily for me are perfectly positioned to point out the local haunts a more traditional tour might overlook.

It proved a warm and friendly welcome to Mulhouse with the added novelty of a couple of hired bikes, which we took for a ride past the C19th mansion houses on the outskirts to an urban art gallery in an old foundry. Patrick offered all the encouragement I needed to experience this city in the saddle without fear of getting lost and we were chatting like old friends from the off – in English and in French.

Mulhouse grew up around its textile industry – the mansion houses having been built for the factory owners – and its Musée de l’Impression sur Etoffes (museum of printed fabric) now attracts designers from global fashion houses to its archives. In spite of my passion for fashion, the biggest revelation was the train museum, Cité du Train, sister (or perhaps brother) of the car museum, Cité de l’Automobile.

Taking the tram from the stop closest to the city’s new and improved tourist office – it’s fluorescent green, impossible to miss – is highly recommended, depositing visitors somewhere between the two musées. Admittedly, the prospect of a Bugatti Veyron at Cité de l’Automobile seemed more exciting than a collection of carriages at Cité du Train…

Perhaps it was the smell of kerosene in the air or the chance to listen in on passengers’ conversations, press my nose up to the windows and sit inside a retro Parisian métro, but the multisensory experience that was Cité du Train made it a real winner. Who knows what I may have missed at the Musée du Papier Peint (all things wallpaper related) or Musée EDF Electropolis (electricity), Mulhouse is home to so many museums. 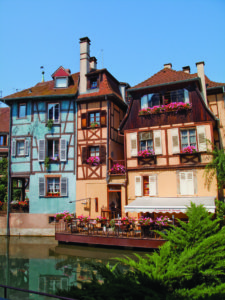 Having worked up an appetite exploring the exhibits in their vast hangars, I set off back the way I’d come for lunch at the Tour de l’Europe, a distinctive triangular tower boasting a 360° view from its rotating restaurant on the top floor. In the time it took to polish off a fish fillet on a bed of choucroute, I’d lost sight of the Hôtel de Ville in Place de la République and was instead facing the Black Forest in neighbouring Germany.

It’s incredible to think that over the course of a century, several generations have changed nationality five times as control over Alsace went back and forth between France and Germany. Nowadays, it feels no more or less representative of France as a whole than Picardy or Burgundy, each region so distinct from the next. The capital of Alsace, Strasbourg, is particularly well set up for international visitors – home, of course, to the European Parliament and European Court of Human Rights.

The region’s German heritage did, however, give me a few – mostly food related – words to add to my vocabulary. I soon learned that a winstub was the place to find hearty traditional meals like coq au Riesling with spätzle – coq au vin made with local white wine, served with little dumplings like gnocchi.

Short of working my way through an entire menu, the next best way to learn about my new surroundings was the Alsatian Museum on Quai Saint-Nicolas, home to nearly 1,000 exhibits covering every aspect of life in the 18th and 19th centuries, from birth to death via cooking, cleaning and farming.

Stepping into a typical timber framed house complete with ‘beaver tail’ tiles and kugelhopf cake moulds really brought the region’s history to life. Even months down the line, the reasons why rural homes were made portable and what made the stube the most important room in the house have stuck with me, as has my first real stork sighting.

In the square surrounding cathedral Notre-Dame de Strasbourg were storks of all sizes, only they weren’t perched on chimney pots, they were hanging up outside every souvenir shop. On returning to ground level from the viewing platform on the 466ft edifice in front of them – once the tallest church in the world – the stuffed species was a welcome distraction… there were more than a few jelly legs in Place de la Cathédrale.

If it wasn’t for these storks, an emblem of Alsace, I’d have failed to spot a single one. But after asking around, I discovered that a handful were known to be nesting in Parc de l’Orangerie. When I found them, the black and white birds with the bright orange beaks were perched so high, they had probably seen me pass in front of the Council of Europe on the opposite side of the road.

Having taken many more snaps than strictly necessary of the storks standing up, sitting down and generally fl apping about, there was a chance I might miss my wine tasting at Hospices de Strasbourg on the other side of the city, so on my way over there I stopped only to line my stomach with a bretzel, a snack sold in every bakery in the area – like a pretzel, only bigger and stodgier (and in this case, covered in melted gruyère).

Hospices de Strasbourg used to be a hospital where patients would pay for their treatment with the grapes grown on their land; it’s one of only two in France, including the Hospices de Beaune in Burgundy. But what was even more interesting down there in the musty smelling cellar was the oldest wine in the world in a barrel, which as my host Philippe Junger had me put into context for the benefi t of an American family, “That’s 20 years older than the USA, made before America was discovered by Columbus”.

There are some very well-known wines from Alsace, like Riesling, Gewürztraminer and Crémant d’Alsace, the local fi zz. So the chance to visit a family of winemakers in neighbouring Colmar was welcomed with open arms. I was met at Domaine Martin Jund by Sébastien, one of two sons in the family business, who gave me the guided tour.

Coming back up from the cellar, we were greeted by a strong smell of onions coming from the kitchen, where Sébastien’s mother Myriam and sister Cécile were sweating onions for the evening’s flammenküche. To celebrate Fête de la Musique, an annual music event held all over France, Domaine Martin Jund was planning to open its doors in the evening and serve these Alsatian style pizzas fresh from their outdoor oven, topped with crème fraîche, onions and lardons, washed down with wine. Later that evening, I was back to sample the local hospitality, sipping Riesling and sharing some flammenküche with a Jund family friend.

Next morning, Colmar’s most colourful colombage buildings, painted in shades of yellow, pink, blue and green looked brighter than ever. It is as picture perfect a town as you could hope to fi nd in Alsace, as well as a top ratedville fleurie. Fortunately, there’s no shortage of restaurants with terraces in Colmar, so you really can take time to smell the fl owers – while basking in the sunshine and watching the wooden boats below navigate their way along the River Lauch.

Thanks to the protection offered by the Vosges mountains, Colmar is the second driest town in France for annual rainfall, but there’s no shortage of water – or fun to be had on it – with two punting stations taking small groups and individuals on tours, passing under bridges so low that the passengers are forced to tuck their heads between their legs!

The bridge by Frédéric Auguste Bartholdi located on the same stretch of river is better proportioned, if not as famous as his best known work, the Statue of Liberty in New York. Bartholdi was born in Colmar in 1834 and now his family home on Rue des Marchands has become a museum, full of sketches and paintings, plus pictures of the Statue of Liberty being built in Paris and a model of one of its ears – half the size it should be, but impressive none the less… In the smallest region of France, size certainly isn’t everything.

Previous Article Paradise found in Gérardmer, Lorraine
Next Article Another side to Champagne