The Peace of Wild Things: Cruising the Canal du Nivernais in Burgundy 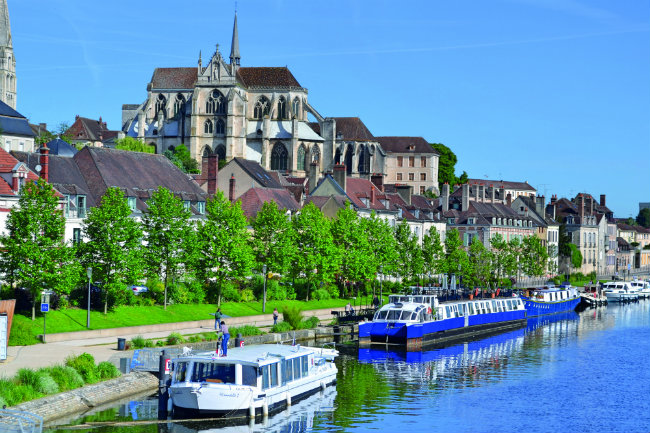 Originally designed as a method of transportation, the Canal du Nivernais is now a peaceful waterway, ideal for cruising gently downstream, as Alison Hughes discovered.

If you have ever dreamt of slowing things down and lazily drifting downstream through beautiful countryside – and you agree with poet Wendell Berry that where “the great heron feeds” there is “the peace of wild things” – then I suggest taking a cruise down the Canal du Nivernais in Burgundy.

My particular adventure started in the picturesque town of Auxerre, where my home for the week, L’Art de Vivre, was moored on the river Yonne. Classed as a ‘hotel barge’, with its flower boxes and herb garden, it was a far cry from its origins as a Scottish munitions carrier a hundred years ago. Against the backdrop of the town’s two unforgettable silhouettes – Saint- Étienne cathedral and Saint-Germain abbey – we were welcomed aboard by our crew. The sun was shining, the champagne flowing, and the tone for the week was set – stunning surroundings, historic places to visit, lush green landscape, good food and, of course in Burgundy, great wine. 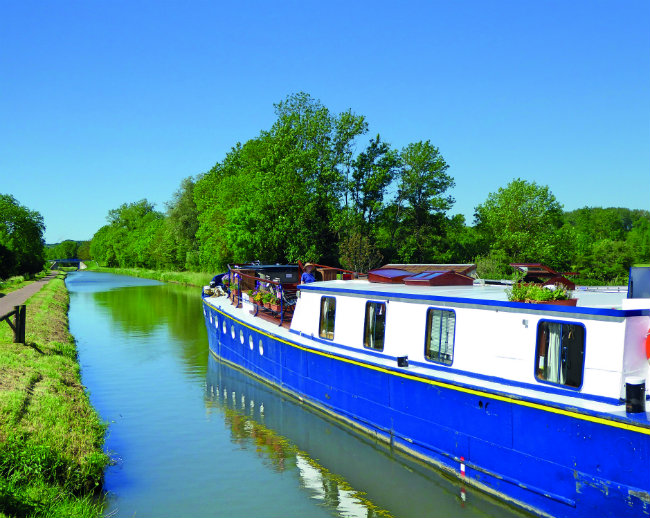 DAY ONE AUXERRE TO VINCELLES

And so we cast off and started our journey, sailing under the Pont Paul-Bert to the first lock, still in sight of Auxerre. It is here that the Canal du Nivernais and the Yonne begin their dance, sometimes joining together, sometimes dividing. A flat-bottomed barge needs only three feet of water to be navigated along the waterways, but water levels can be a concern during dry periods and navigable channels are sometimes very narrow.

We were soon out of the town, passing people fishing from the banks and the celebrated AJ football club (Eric Cantona was one of its protégés) and into the peaceful countryside, past a succession of delightful villages, and through another seven locks to our lunchtime mooring at Vincelles. 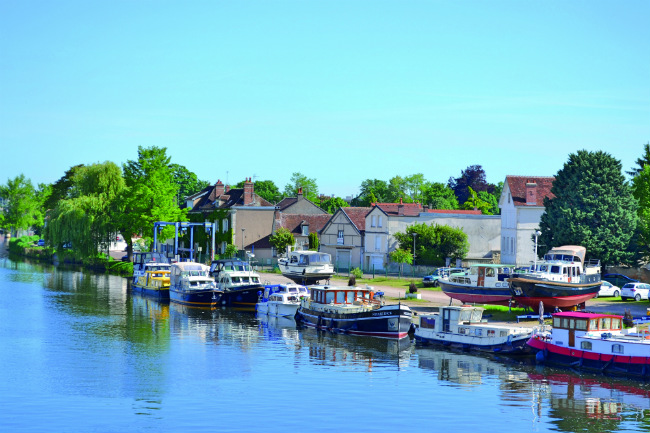 Our first day set the pace for the week: half a day of cruising, with a pit-stop along the way. So, after a delicious meal, during which my resolution not to drink wine at lunchtime was quickly dispensed with, it was off to taste more wine in the famous village of Chablis.

Here we were treated to a tour of the oldest cellar in the village, at L’Obédiencerie, where monks first started making wine in the 9th century. We learnt about the importance of terroir and climat and sampled a selection of crus before returning to a cooling apéritif on deck. 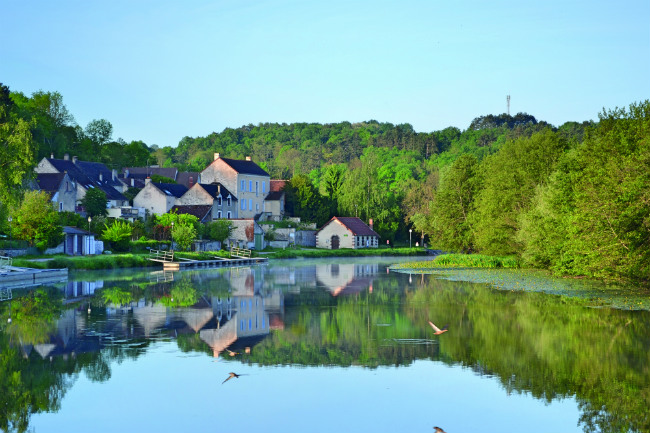 In the morning, we headed back to Auxerre for a whirlwind tour of the cathedral; a delight for architecture and history buffs alike as its present construction spans five centuries.

The town deserves more than a fleeting visit and I suggest, if you are taking a similar cruise, that you spend a whole day in Auxerre to explore it fully, either on foot or with the electric bus, Le Voyageur.

One of the best views of the town is from the footbridge, where you can clearly see that it was built on three hills, each topped by an iconic religious building – the cathedral, the abbey and the Église Saint-Pierre. The decision to dismantle the ramparts and reroute the main road to Paris along the quais has meant that the half-timbered medieval centre has been preserved. The place Saint-Nicolas, once the port for passengers and goods, is a pleasant spot to have lunch and watch the river. This was the mariners’ quarter and is surrounded by their tall houses with vast storerooms. Saint-Nicolas, patron saint of bargemen and flotteurs du bois, looks down benignly from his niche. In the centre of the old town stands the clock tower and nearby are statues of famous sons and daughters: Marie Noël, a 20th-century poet from the town; Nicolas-Edme Rétif, the 18th-century novelist; and Cadet Rousselle, who inspired the song of the same name. The abbey has ancient origins and houses the tomb of Saint-Germain (5th century). 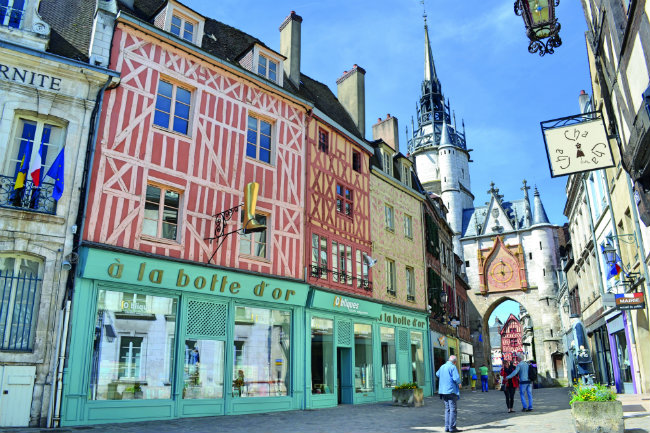 Its crypt has fine examples of Carolingian art (841-859 AD) painted in the local ochre. Until quite recently, part of the abbey housed a hospital but this is now a cultural centre and museum hosting activities and exhibitions throughout the year.

After a morning of culture, it was time to relax on deck as we sailed along listening to the birdsong – trying to identify trees and flowers along the way.

We were joined by dragon flies, a family of water birds, and a heron that tantalisingly managed to avoid being photographed. Sitting with a cool drink, absorbing the sights and sounds of the countryside as we drifted along, was sheer bliss. 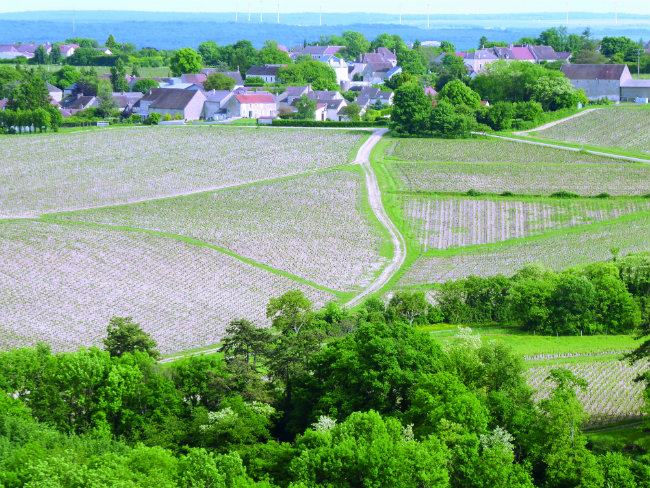 The wine-making village of Chablis and its surrounding vineyards. Photo: Alison Hughes

Off we went to the medieval walled town of Noyers-sur-Serein for a snoop around the craft shops and market. Of great strategic importance in the Middle Ages, the town was once fortified with 23 towers (19 still stand) and a château (demolished by Henri IV, but now being rebuilt by a team of volunteers). Wooden sculptures, on the corners of the half-timbered houses, often depicting trades, are characteristic of Noyers. It is such an attractive place that many craftspeople and artists have settled here – look out for the leather goods, pottery and illuminated cards. 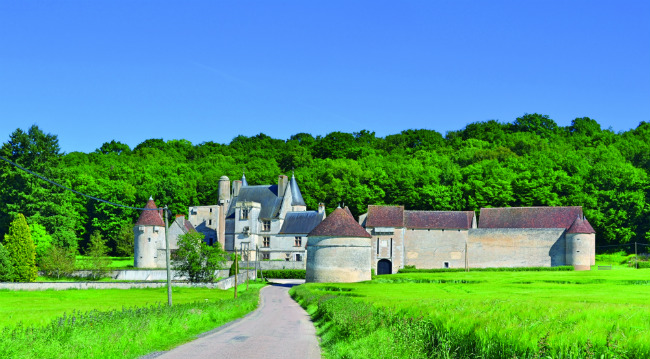 But our mission was to buy lunch! Avoiding the local speciality, andouillette (not a pleasant sausage in my opinion), we filled our basket to the brim with artichokes, strawberries, pâté en croûte, saucisson and local cheeses. Then it was back to the boat so Jim, the chef, could whip up a feast with our purchases.

After a very satisfying déjeuner, it was time to offset those calories with a couple of hours’ cycling along the towpath. A token gesture really!

But this was cycling that appealed: straight paths, on the flat, and impossible to get lost as long as you kept going in the same direction. And, as barges are not allowed to go more than 8mph, we stood a good chance of beating L’Art de Vivre to our mooring near Le Saussois. There was just time to change for dinner at a traditional auberge at Nitry. 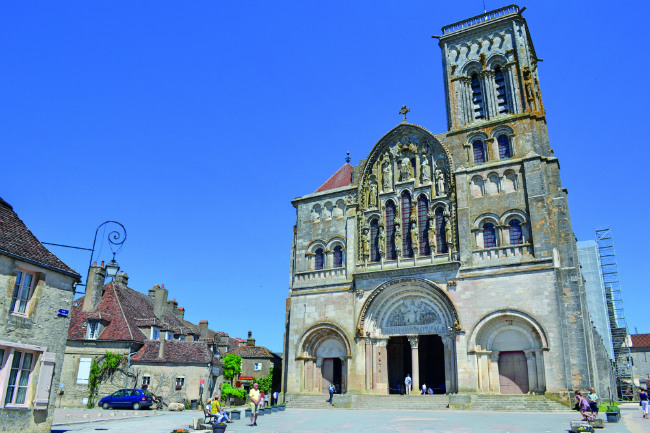 The basilica of Mary Magdalene at Vézelay. Photo: Alison Hughes

The morning saw three of us pedalling down the towpath again, this time to Châtel-Censoir and then on to Lucy-sur-Yonne, one of the prettiest mooring sites on the canal, right next to the river.

Our afternoon visit was to the iconic town of Vézelay, which needs no introduction. The ‘eternal hill’ that pilgrims have visited since the 9th century does not change. Its distinctive outline can be seen from afar, with the tower of the basilica pointing heavenward. The steep climb up the main street is rewarded by the cool interior of the church, where pools of light from the clear windows lead the way to the altar. At the summer solstice the light falls exactly in the centre. Symbolism is everywhere in Vézelay.

A surprise awaited when we returned to the boat: a keyboard player and a drummer ready to entertain us. A cold glass of Pouilly-Fumé, hot sun, shady trees, a heron flying by and two jazz musicians serenading us – this was another kind of heaven. 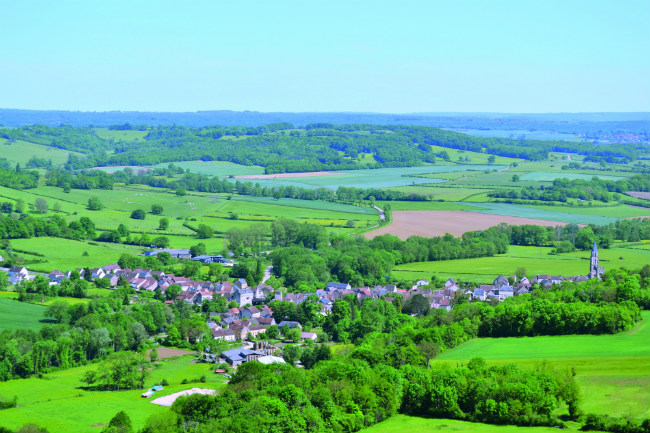 Our last day on board dawned with some sadness. I had come to regard L’Art de Vivre as my home away from home. But we had one more day to enjoy it all. So, after a morning stroll along the towpath, we were off to visit the Château de Bazoches, where Louis XIV’s great military strategist and architect, Vauban, once lived. I was aware of Vauban’s forts but not of his egalitarian leanings and writings; which ultimately led to his falling out of favour with the king.

The present owner is descended from Vauban’s eldest daughter but is not averse to helping out in the gift shop or cutting the lawn. 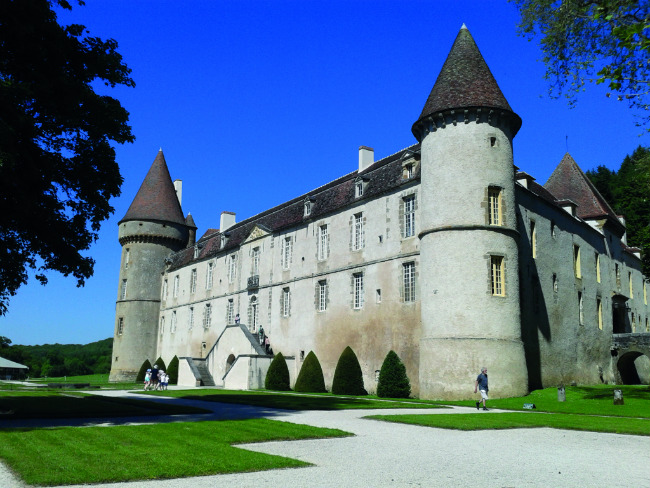 Our last dinner on board started where we had begun, with champagne and canapés. But now we all knew each other a little better and were enriched by our experiences.

On L’Art de Vivre we had had a taste of the ‘art of living’ but most of all we had learnt to slow things down, to switch off, to, as Wendell Berry wrote, “rest in the grace of the world, and be free.” 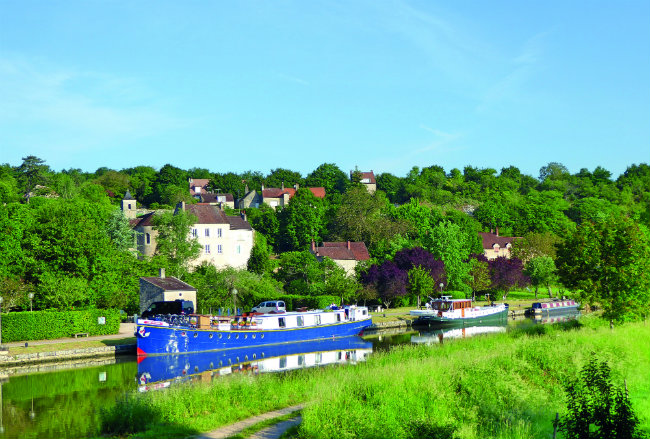 For more information on the Canal du Nivernais and Burgundy see www.bourgognefranchecomte.com

Alison travelled courtesy of European Waterways, who offer an extensive variety of river cruises throughout France and other European countries. Prices for a six-night cruise aboard the hotel barge L’Art de Vivre start at £2,850pp in a twin/double cabin, including all meals, wine, an open bar, excursions and local transfers. Full barge charters are available for families and groups. Tel: +44 (0)1753 598555, www.gobarging.com 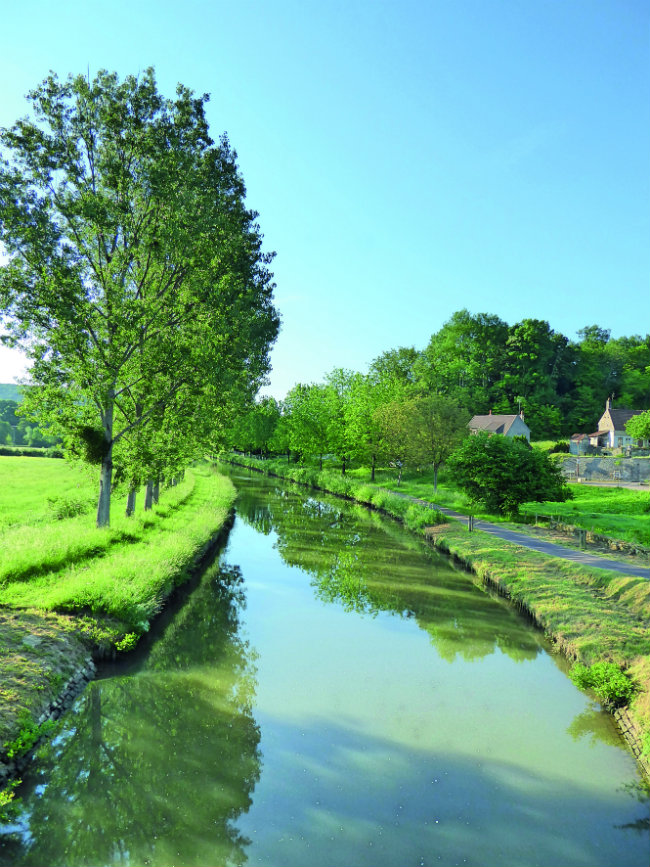