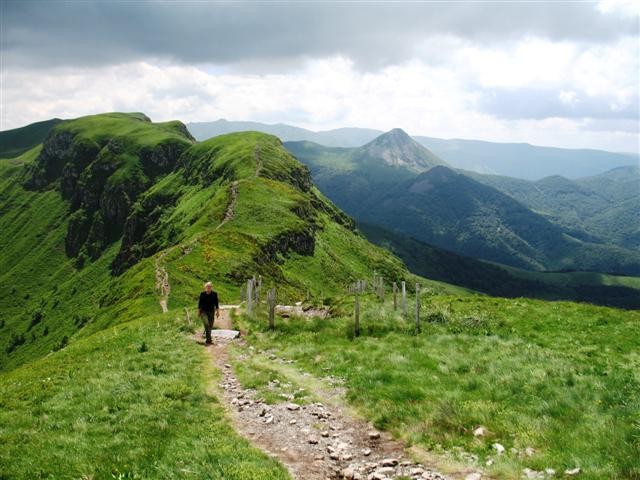 France offers some of the world’s most incredible hiking trails- from the high mountain passes in the Alps to the GR20 which traverses Corsica (and is oft described as the toughest long distance trail in Europe). But what if you’re looking to get away from the crowds? In this article, walking leader William Armstrong takes us on a mini-tour of France, visiting some beautiful but less travelled French regions. But shhh, don’t tell anyone!

Baronnies – Northern Provence
Les Baronnies is a hidden and unspoilt corner of France where the Alps meet Provence. It harbours beautiful historic villages, such as Montbrun-les-Bains, which cling to rocky mountain sides decorated in purple lavender flowers.

Sheltered by the higher Alps, its privileged position and sunny climate makes the Baronnies a destination to delight your senses. As well as the remarkable light that draws you into its rugged and beautiful landscapes it’s also a region where wild thyme, lavender, herbs and pine produce a wonderfully scented experience.

Each corner of this fascinating area has its own characteristics. Rocky bluffs and cliffs define summit tops from which steep slopes marked by ravines descend into narrow gorges or wide fertile valleys covered in lavender, fruit trees and olive groves. A peppering of fortified medieval villages established by the barons of Mévouillon and Montauban in the 11th century completes the timeless scene. The walking in this region can be varied from easy walks to challenging treks, although the steep terrain means that a good head for heights is preferable.

A variety of walks and treks are possible which flirt with this outstanding alpine scenery. They vary from moderate to challenging in nature, and use a network of trails totalling more than 600km in length. Don’t forget your binoculars, as there are a host of protected species including the largest population of alpine ibex in France with 2000 individuals, plus chamois, golden eagles and bearded vultures.

Beaujolais – Central France
There is a great deal more to Beaujolais than its vines and wine cellars. Go beyond the accessible vineyards and you find yourself in a multitude of different landscapes, each with its own special character.

The High Beaujolais, for example, is a series of lofty ridges and rolling hills nearly 1000m above sea level that provide a landscape of great panoramas and rich contrasts.

By seeking out the hills and ridges between the woodland, you get spectacular views overlooking the vine covered, valley slopes. This upland area retains an isolated feel where you’re guaranteed crowd free trails.

Further south in the Pierre Dorrée (region of golden limestone) you’ll find some of the prettiest medieval villages in France perched on hilly promontories. Referred to locally as the French Tuscany, the gentler hills provide for easier walking or trekking.

Of course, you don’t have to go too far in this friendly region to find welcoming winemakers to try the local tipple!

Tarn – Southwest France
Hundreds of medieval towns or bastides are scattered throughout the Midi-Pyrenees. From high on rocky hilltops, villages such as Cordes have kept watch over the surrounding countryside for centuries. The three rivers of the area have cut through the countryside giving it a distinctive character of deep rocky gorges, steep wooded valleys and high sunny plateaux.

Enjoy the slower pace of life in this distinct and sunny corner of France between the Pyrenees and the Massif Cantral. Walking tours in the region vary in length and difficulty, allowing occasional walkers to enjoy the ever changing views and landscapes and see the beautiful array of wildlife and flowers the area is particularly well known for – especially spring orchids.

Cantal Mountains – Massif Central
The Cantal Mountains, located in southern Auvergne are the extinct remains of one of the largest volcanoes in Europe. Erosion by ice and water has since created a series of beautiful u-shaped valleys, defined by rugged and airy ridges that emanate from rocky summits.

Offering a choice of moderate to challenging trails suitable for the regular hill walker, the Cantal mountains provide for exciting and dramatic walking along open ridges with vast panoramic views. This region would suit walkers who are comfortable with days out in the British hills.

The rich green hues of their steep mountain slopes and their wild untamed nature give the mountains of the Cantal an almost British feel (although its southerly position means that the area has relatively high levels of sunshine and high temperatures.) In addition, the Cantal area, which forms part of the Auvergne Regional Park has a rich historical legacy through its rural settlements and farms. The local architecture is simple yet easy on the eye, the sturdy cottages blending seamlessly into the mountainous backdrop.