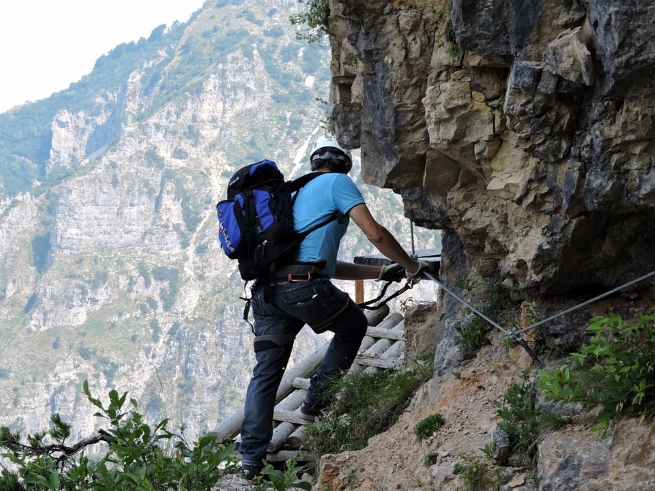 An overview of climbing sites in the eastern Pyrenees

This is a much more specialist area than walking, and with a high potential risk factor, so it is important to know what you are doing or employ a local instructor! Crags in the area are split into two types, single pitch, often shown as Ecole de Escalade on the maps and multi pitch, rarely shown on the maps. By there nature single pitch crags are used for beginners as they are often near to the road and offer an easy way down from the top. Multi pitch crags are often more complex.

• Balcere – Situated above Les Angles and easily accessed being just 5 mins from the parking and café in summer. Good selection of easier single pitch climbs, up to 25m high on solid granite with a few multi pitch to the right. Completely bolted with lower-offs. There is a small red coloured crag near the road which is suitable for kids and beginners.

• Bouillouses – Can be found 7 km along the road to Lac de Bouillouses. It’s just above the road on the right before a small clearing and 5 mins walk from the car. The crag is 15-20m high and is a friendly place getting the sun all day. The easier lines are on the left with a good selection of harder climbs on the right. Well worth a visit.

• Roc D’Aude – A few kilometres further on the road to Lac de Bouillouses, just after the S bends you will find this superb crag with many vertical lines often at the harder end of the scale. The easiest routes here are F5a, so be warned!

• St Pierre dels Forcats – A great little crag just 50m from the car park there!! This crag has three faces. Round to the right there are two easy routes for beginners at F3+ but they do end halfway up the rock so ropes have to be set by an experienced person. The middle section has several routes at F4c – F5b with a superb line at F5c climbing the overhang at the LH side. The LH section has probably the best lines climbing the lower overhanging wall and slabs above at a min grade of F5b.

• Other smaller crags exist at places like Font Romeu but mention should be made of the bouldering at Targessonne which is world famous and second only to Fontainbleu near Paris. Take a bouldering mat and strong fingers!

• The granite slabs to the south of Prades provide some of the best multi pitch climbs in the area. Above Vernet le Bain you find the Pillar de St Martin with three hard (F6b) 100m routes. Further up the track towards the Marialles refuge you come to Le Petit Yosemite. On the lower crag there is a classic 6 pitch F5a route, voie Les Secouristes plus a selection of harder walls and slabs (F6c and above) The upper cliff has a range of spectacular slabs 120m high. If friction is your thing then try here. All of these routes are bolted.

• Further up, by the refuge there are several multi pitch crags, the most spectacular looking being Roc de Mariailles, more than 400m high. Most of the routes can be accessed within 1 hour of the refuge and climb the lower part of the crag with Stentor 250m F5c+ being the most popular. Most of the routes here are traditional and other than at belays, you will need to place a lot of your own gear. There are more than a dozen routes here and all are serious as the tops are at 2000m.

• On the other side of the Canigou, on Pic Barbet several climbs of 250m have been made. The E face of the Canigou has several lines which now are only recommended in winter. Unfortunately, it is the same problem with many of the peaks on the France/Spain border where there are great looking cliffs but dubious rock means, wait for a bi freeze!

• The cliffs in Spain are world famous but in our area have a look at the Sierra de Cadi as well as the Pedraforca, accessed through the tunnel de Cadi.

• Near to Perpignan, you will find the two mile long, limestone cliffs of Vingrau, long considered to be the best in the area. These cliffs were visited by Brits in the 70’s, on their way to bigger things, but are now considered a great site in there own right. There is everything here from one pitch sport routes to multi pitch, classic traditional routes, the best of which is Le Petit Dru, five pitches of highly polished limestone, but with a big route atmosphere.

• Just down the road, “hard men” will look at the overhanging roofs in Tautavel which is now one of the “in” places to climb.

• A totally different experience is Cardou, near Rennes les Bains where six sectors can be found with single and multi pitch routes on good quality limestone. This is a good winter day spot as summer PM can get really hot.

• Finally, the Ariège Pyrenees should not be forgotten also as it has some of the best granite and limestone cliffs in the Pyrenees. Pic D’Orlu has magnificent faces of 900m with routes to match. Shorter routes of 300m can be found on both the E and S faces with many new bolted lines. Further down the valley near Tarescon the big limestone faces are obvious. Near to Sinsat, you can find anything from single pitch to 400m multi day routes. This is a “sport” climbing area with mainly bolted routes.

All of the crags in this review have guide books available but you may have to search in some of the small paper shops in the local villages or in Decathlon where climbing gear can also be found.