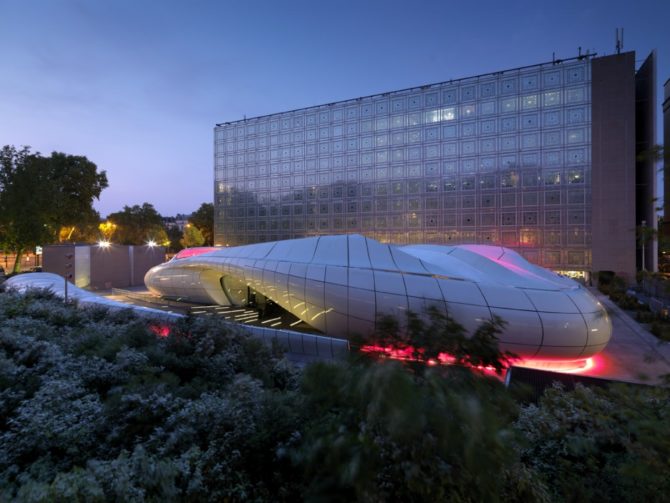 Design gets a higher profile in the Pompidou Center’s new presentation of their contemporary collections, now displayed as a diverting meld of art, architecture, design, photography and new media. In the first design room, such iconic works as Pierre Paulin’s Tongue Chair, Eero Saarinen’s Tulip Chair and Ettore Sottsass’s Valentine typewriter are given an insightful twist by Carol-Marc Lavrillier’s accompanying photos.

In a large space behind artist Daniel Buren’s green-and-white-striped wall, an impressive gallery called Environnements Polychromes demonstrates color as a powerful design tool: Jean-Philippe Lenclos’s Supergraphique decor for Elle magazine covers a red-and-white wall; Verner Panton’s monumental Living Sculpture sofa, created for a private Basel residence in 1970–71, dazzles in a vivid spectrum of red, violet, orange and blue. And a handsome scale model of the Pompidou Center itself shows off the strong primary colors—red, blue, green and yellow—of its panels and tubes.

In another gallery, design curator Françoise Guichon grouped together recent acquisitions that have historical origins and inspirations. Jerszy Seymour’s 2010 Amateur Workshop, set up like an art installation, is a collection of primitive stick furniture whose elements are glued together with globs of molten wax. Martin Szekely updates the original idea of mirrors with his silicon-carbide version whose black surface reflects high-precision images. And Matali Crasset hijacks big plastic carry-alls by turning them into modular furniture poufs, like the ready-made art objects of Marcel Duchamp.

Displayed in a small open gallery, the computer-assisted works of the Dutch Demakersvan Design House have transformed 57 layers of birch plywood into a Cinderella Table (2005), and woven a lacy embroidered motif into the chain links of the Lace Fence (2007). website

VIA Design 2011, an exhibit at VIA’s gallery in Paris’s Viaduc des Arts (June 8–26), showcases ingenious and ecologically conscious prototypes of 13 projects by 17 emerging designers, sponsored by grants from the government and industry supported VIA association that promotes innovative French design. Gaëlle Gabillet and Stéphane Villard invented a series called {objet} trou noir (black hole), useful household objects made from Cofalit, a material derived from purified and vitrified, formerly asbestos-contaminated construction waste that resembles obsidian or basalt. Made into bricks, paving tiles, radiator covers and a stove heater, the Cofalit is utilized for its thermal conductivity and refractory properties. For her Saturne table lamp and ceiling fixture, Béatrice Durandard uses a ring of LED lights, surrounding and shining inward onto a copper globe, to reflect and warm up normally cold LED light. Antoine Phelouzat’s clever and colorful Case storage unit is composed of biodegradable PLA resin cubes that can be stacked in variable configurations. 33 ave Daumesnil, Paris 12th. website

Pritzker-prizewinning, Iraq-born London-based architect Zaha Hadid’s Mobile Art Pavilion has landed like a gleaming spaceship in the courtyard of Paris’s Institut du Monde Arabe. Commissioned by Chanel in 2005, Hadid’s structure, made of arched white plastic resin and fiberglass, curls inward like a nautilus shell. It was originally designed in 2008 to harbor a traveling contemporary art exhibition—a project conceived by Karl Lagerfeld to celebrate the 50th anniversary of Chanel’s famed quilted handbag. The Pavilion, which Lagerfeld described as “a walk-in Brancusi”, made stops in Tokyo, Hong Kong and New York before being retired. When the IMA evinced interest in the Pavilion as a showcase for Arab talent, the couture house made a gift of it. With refurbished 20-foot-tall interiors that swirl through 2,300 square feet to a central skylight, the Mobile Art Gallery is making its Paris debut with a show documenting Hadid’s impressive projects. Fittingly, quite a few of those projects are soaring up in the Arab world—Cairo, Abu Dhabi, Rabat and Dubai—in addition to an entire plain of skyscrapers planned for Beijing. A film with superb computer graphics explains her works, compensating for block-like 3D scale models that are incomprehensible to most nonprofessional visitors. Until Oct. 30. 1 rue des Fossés Saint Bernard, Paris 5th. website

Ronan and Erwan Bouroullec, the top design-team brothers from Brittany, are riding high. In January they were chosen as Designers of the Year 2011 by the Maison et Objet trade show, where they displayed an ultra-comfy Ploum sofa for Ligne Roset and an amazing new diamond-shaped contemporary update on a Persian rug design called Losange, for venerable kilim producers Nanimarquina. More recently, they won the competition to provide a contemporary addition to the imposing Gabriel staircase at the Château de Versailles. Originally designed in 1772 by architect Ange-Jacques Gabriel, the staircase, leading to the royal apartments, was completed only in 1985.

The Bouroullecs’ designs are produced by such world famous manufacturers as Vitra, Kartell, Alessi, Magis, Cappellini, Swarovski and Established & Sons. They also do coveted limited editions for the Galerie Kreo in Paris. Their work is found in the collections of influential museums including New York’s MOMA, the Chicago Art Institute, the Musée des Arts Décoratifs and the Pompidou Center in Paris, and they have been given exhibitions in three of the design world’s most prestigious venues—London’s Design Museum, Los Angeles’s MOCA and Rotterdam’s Museum Boijmans van Beuningen.

Now this fall the Bouroullecs will finally have their first major retrospective at home in France—a 10,000-square-foot tribute to the last ten years of their work at the Pompidou-Metz, the new annex of the Pompidou Center in the capital city of the Lorraine region, Oct 7 to July 30, 2012. www.bouroullec.com, www.centrepompidou-metz.fr

Originally published in the June 2011 issue of France Today