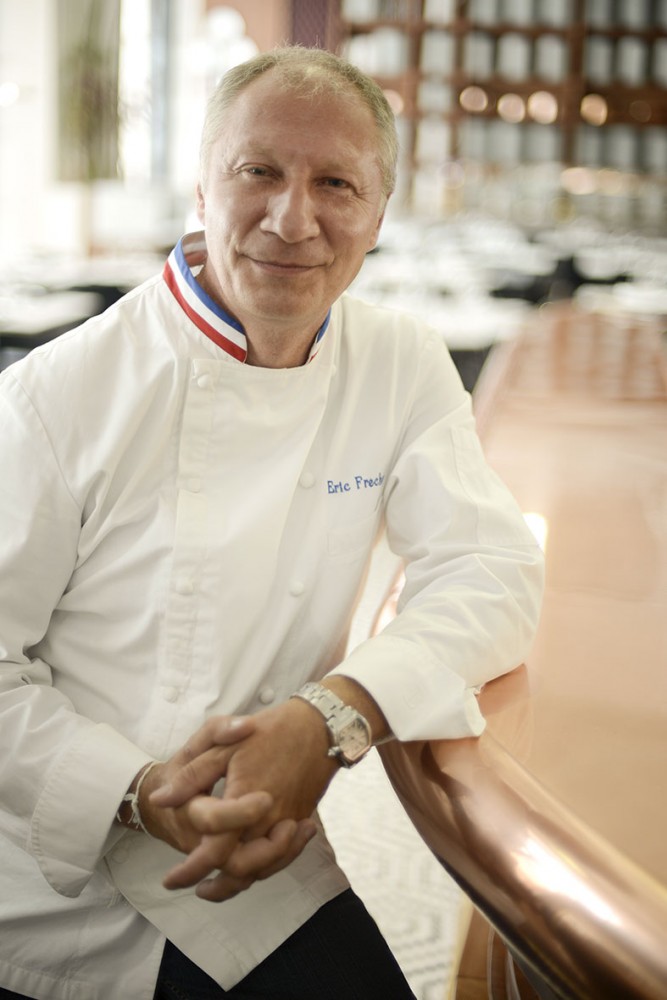 It was a chilly, grey day when I hopped on the metro line 14 for Gare Saint-Lazare. It was the unlikely setting for a meal I had been giddily anticipating for weeks. Eric Frechon, the Michelin three-starred chef behind Le Bristol’s acclaimed restaurants, opened a brasserie in September that quickly became the buzz of Paris. Indeed Lazare has become the chic centerpiece of the renovated Gare Saint-Lazare; the train station that links Paris with Normandy has had a welcome face-lift, now lined with 80 fashionable boutiques. (The gare has a special significance for the chef, who hails from Normandy.)

In developing the concept for Lazare, Frechon’s goal was to democratise French gastronomy by bringing la bonne cuisine to as many people as possible. In the chef’s words: “I propose a generous, authentic, family-style cuisine, directly inspired by our French culinary tradition, around which it’s a joy to gather with friends, family, and colleagues.”

I couldn’t help but think of Adam Gopnik’s book, “The Table Comes First: Family, France and the Meaning of Food,” as I relished the meal as an event, full of ritual, emotion, and sensual pleasure—eating in the company of a friend, with the clatter of fellow diners serving as the soundtrack, the choreographed order of the courses served in a pretty setting, as we talked about everything under the sun.

The restaurant has an airy loft feel, with exposed ducts and soaring ceilings. Its design is a chic, contemporary take on the classic brasserie, where the glasses and tableware are stacked on shelves in plain sight, serving as part of the décor, and the bar is the beautiful focal point. Interior designer Karine Lewkowicz incorporated lots of wood, copper and leather in the decoration. Playful touches include a chalkboard resembling a train departure table, and a printed menu reminiscent of a daily newspaper you’d read while waiting for your train.

Traditional French dishes, like Tartare de Boeuf and Filet de sole Dieppoise, are resurrected with flair. Not to be missed: the Agneau de sept heures confit au citron et aux olives, a slow-braised lamb served with lemon confit and olives. Among the appetizers, I loved the green bean salad with artichokes and hazelnut oil, plus the morel mushrooms sautéed in white wine, delivered to the table in a copper casserole, steaming hot. For dessert, the house specialty is the Paris-Deauville, a cold soufflé inspired by a recipe from Frechon’s grandmother.

Main courses average 22 euros; the daily special is 18 euros. Every Sunday, Lazare serves the “déjeuner de grand-mère”- featuring a traditional menu like you’d find chez Mamie. Service is non-stop from early morning to midnight, and you’ll even find a special “goûter” menu for a mid-afternoon snack.

With Lazare, Frechon exalts traditional French gastronomy and reaffirms the importance of the table in a changing French society. After all, explains Adam Gopnik, food and the rituals of the table are “what make us human” and form the core of our memories. “Though we don’t always acknowledge it enough, we still live the truth Darwin saw: food is the sensual pleasure that passes most readily into a social value.”