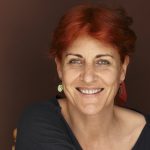 Emma Henderson went to school in London and studied at Somerville College, Oxford and Yale University. She wrote publisher’s blurbs for two years, then spent a decade teaching English in comprehensive schools and further education colleges, before moving to the French Alps where, for six years, she ran a ski and snowboard lodge. She now lives in Derbyshire and is a lecturer in English and Creative Writing at Keele University. Emma Henderson’s debut novel, Grace Williams Says It Loud, was published to great acclaim in 2010. It won the McKitterick Prize and was shortlisted for the Orange Prize, the Commonwealth Writers’ First Book Award, the Authors’ Club First Novel Award, the Wellcome Book Prize and was runner-up for the Mind Book of the Year. Her second novel, The Valentine House, has its roots in a remote valley in the French Alps, where she lived for six years.