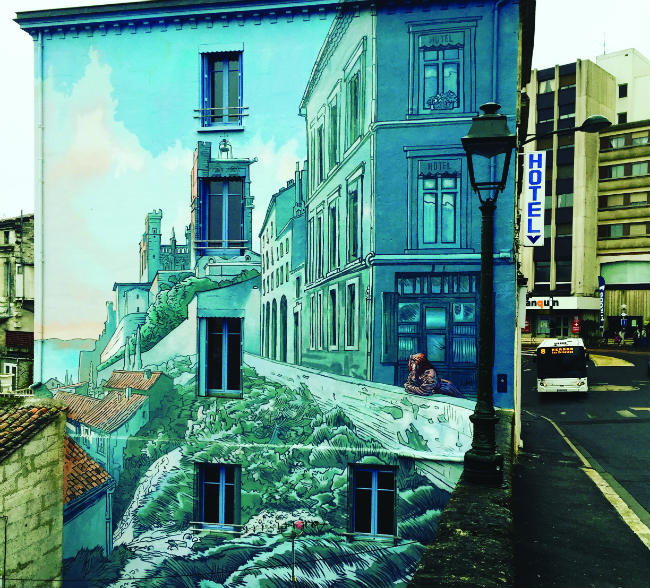 Situated in the Charente department in the region of Nouvelle-Aquitaine, Angoulême is a delightful Romanesque city. Encircled by ancient ramparts, it’s perched on a rocky ridge above the Charente river. The city is meant for strolling (or touring in a classic car), with interesting architecture, lively restaurants, and a bustling marketplace.

It’s also known as the capital of bande dessinée (comic strips), and the annual comic book festival, known as Le Festival International de la Bande Dessinée or FIBD, draws fans from all over the world. The city’s dedicated comics museum hosts fascinating exhibitions, and there’s also a circuit you can follow around the city to take in the gigantic cartoon wall murals.

In recent news from Angoulême, the city has been designated a UNESCO Creative City, in the literature category, by the Director-General of UNESCO, Audrey Azoulay. To quote UNESCO: “As laboratories of ideas and innovative practices, the UNESCO Creative Cities bring a tangible contribution to achieving the Sustainable Development Goals through innovative thinking and action. Through their commitment, cities are championing sustainable development actions that directly benefit communities at urban level.” There’s now a total of 246 UNESCO Creative Cities in the network.

Comic book fans will be pleased to learn that the French Minister of Culture has declared 2020 the “Année de la bande dessinée.” This special event will be inaugurated at the 47th edition of the comic book festival, which will take place 30 January- 2 February, 2020 in Angoulême.