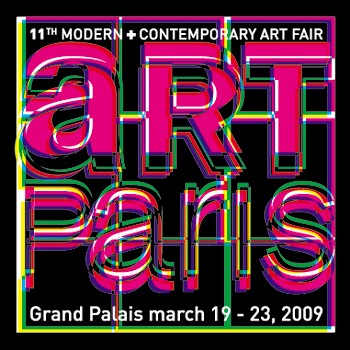 The most notable thing about ArtParis, the annual contemporary art fair that opened yesterday at the Grand Palais, is what’s not on show. There are almost no videos and very few installations or conceptual works-although British Tracy Emin’s red neon script reading People like you need to f**k people like me might be considered a concept of sorts.

By far most of the 115 galleries in this year’s 11th edition of the fair are exhibiting paintings, drawings, sculpture and photography, but it’s not quite the “return to order” and neo-classicism that followed World War I, just a return to traditional media rather than subject matter. Eminent art and auction critic and International Herald Tribune columnist Souren Melikian has written often lately about the paucity of really good goods plaguing the gallery world, and that’s very evident at this fair. When very old street snaps of Robert Redford and Jackie Kennedy grabbed by New York paparazzo Ron Galella are blown up big and framed as art, you know things have come to a pretty tight pass.

There are a lot of abstract splotches, brushstrokes and scrawls on offer, from Hans Hartung down to childlike scribbles, and a profusion of purely decorative works, like big-flower paintings that look like simple fabric prints, or Finnish artist Kaarina Kaikkonen’s Queen of the Night orchid-like constructions-made from shoes and spoons-that would be useful as sconces if fitted with lightbulbs.

There is a not-so-surprising amount of erotica, or faux-erotica, from highly professional fashion-mag-style black and white photos of nudes (including the model Natasha by Paolo Roversi) to the tacky, the trashy, the kitschy-try a two-foot-high brightly-colored, waxy statuette of a nude pinup girl leaning on a slightly smaller Heinz ketchup bottle, or life-size nude pinups riding BIG cigars-and the downright gross.

There’s a good deal of street art, like the brightly-colored graffiti canvases of the American JonOne, and for the first time a sizeable showing of BD (bande dessinée, or comic-book) art, like “How I Became a Fake Cartoonist” by French star Fabien Verschaere, a large black-and-white painting crowded with figures (including his ghoulish little signature versions of Mickey Mouse and Batman), that owes a visible debt to the big daddy of them all Robert Crumb.

One main object of this annual event is to bring new young artists to the fore, and that it does accomplish. And for those looking for the reassurance of well-known names, also on hand are works by Combas, Matta, Arman, Peter Knapp, Nan Goldin, Marina Abramovic, Wim Delvoye, and a couple of wonderful big fat Boteros.