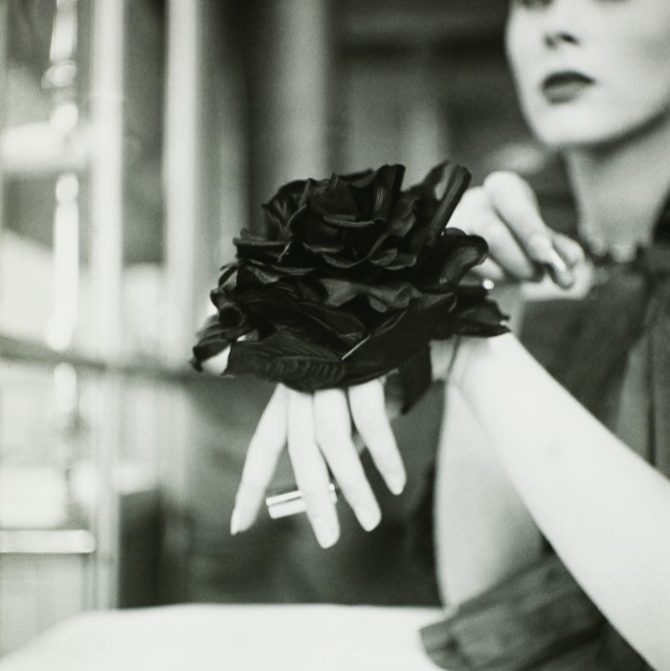 Vincent Leret, the heritage manager at Christian Dior Parfums, takes us back to the designer’s Normandy childhood where his mother sparked his lifelong love of roses.

Excerpted, with the publisher’s permission, from ‘Dior and Roses’. Texts by Eric Pujalet-Plaà, Brigitte Richart and Vincent Leret. Published by Rizzoli.

Before he tailored dresses, Christian Dior learned how to prune the roses that his mother planted. Les Rhumbs Villa, with its name derived from the compass rose, gave Madeleine Dior a crazy idea: the roses in her garden would look out to sea. This is botanically risky, but the challenge of it reveals considerable panache and a desire to surprise. Roses selected from sale catalogues at that time would allow all manner of fancies. From the early nineteenth century, new horticultural varieties had emerged, cultivated by French and British breeders. The most popular were the tea roses, offering an infinite range of vigorous, flowering, and climbing plants. Madeleine Dior understood the landscaping potential of these roses, which she arranged in clusters, borders, and over the arches along the wall that lines the coastal path. 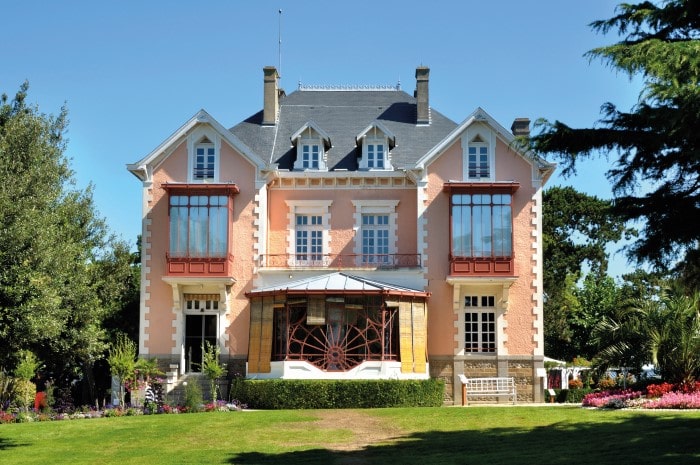 Les Rhumbs Villa, where the designer grew up, inspired by his mother’s rose garden © Arnault D via Wikimedia

Young Christian’s first memories of roses were of ample, lavish, fragrant double blooms. Now over a century old, this rose garden is still on the same spot and retains the same rebel spirit. New rose plants are introduced there, still arranged to look out over the coast and the spectacle of the tides. Among the recently planted varieties is the Jardin de Granville rose, which perfectly matches the Les Rhumbs Villa’s blush pink exterior. Those early years spent in Granville made a deep impression on the future fashion designer. A rose in the form of a star, recalling the symbol of the mariner’s compass, was engraved like a secret by Baccarat’s craftsmen underneath Miss Dior bottles. It is as if this discreet detail were a note sent by Christian Dior to the elegant women of the Belle Époque and their lingering perfume.

“What I most remember about those women,” he wrote, “is the waft of scent in their wake”. They were single-flower fragrances often devoted to the rose. His mother Madeleine is, of course, forever associated with this queen of flowers in her rose garden at Granville. The same floral exuberance that she created in the garden is hidden in the Miss Dior dress from the Spring– Summer 1949 collection, with its petticoat effects and profusion of embroidery. A designer with such a fondness for flowers could not ignore that palette of scent and texture in his couture and perfume collections. The names that Christian Dior gave to some of his dresses confirm this legacy: Rose Thé (tea rose), Rose des Vents (compass rose), Roseraie (rose garden), Rose Pompon (pompom rose), and Jardin Anglais (English garden). 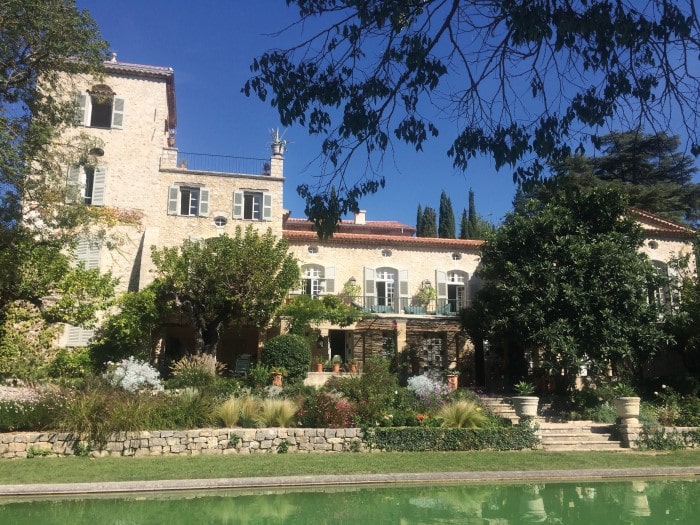 Those tea roses, with their beautiful glossy foliage, would even be found again later in the decor of the Château de La Colle Noire, where he had all the walls covered with floral wallpaper. He also never ceased to be inspired by the shape of flowers, especially that of roses. A few months after the success of his first collection, presented on February 12, 1947, Christian Dior registered the word corolle (meaning corolla) at the commercial court in Paris, for “any perfume, hygiene or beauty products”. He had already chosen this name to describe the silhouette in his catwalk parade, but it was instead the expression ‘New Look’, coined by Harper’s Bazaar editor-in-chief Carmel Snow, that had captured the public’s imagination.

Still, Dior held onto the idea and registered the word in June 1947 for his perfumes because he had not yet found a name for the fragrance that was released alongside that first collection. Corolle perfectly suited the scent, with its mixture of florals and chypre, but it was thwarted again by fate after Catherine Dior dropped by at 30 Avenue Montaigne.

Seeing the fashion designer’s sister entering the elegant rooms, Mizza Bricard (the designer’s muse) exclaimed, “Ah, here’s Miss Dior!”. Christian Dior, who was never far from his muse, immediately responded, “Now that’s my perfume!”. On December 4, 1947, at 11am, the name Miss Dior was trademarked. Adieu, Corolle. The perfume would be presented to journalists 13 days later. Although the name of that first perfume sounded less floral than had been planned, flowers featured prominently in the display cases conceived by the interior designer Victor Grandpierre. Large medallions decorated with roses were placed majestically in the windows of the new Dior boutique in 1955. The neo–Louis XVI spirit, which Grandpierre and Christian Dior shared, dominated Grandpierre’s spectacular mise-en-scènes where perfume reigned supreme. 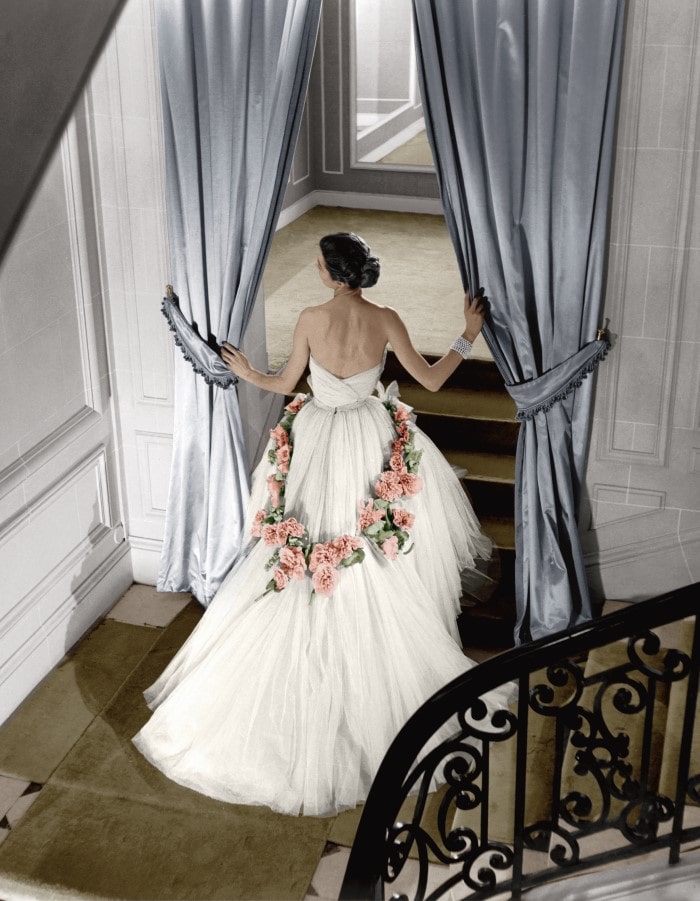 This tradition continues today with the bows created by the couture workshops for special editions of the Miss Dior bottle. Delicately rose-tinted lace petals and embroidery keep up the designer-perfumer’s tradition. In designing the Diorissimo perfume bottle, Christian Dior asserted his love of the Age of Enlightenment and of its botanically inspired objects.

He took up the form of the first amphorae but replaced the droplet stopper with a bouquet of flowers comprising pinks, jasmine, roses, and foliages. Produced by the Charles firm in 1956 after Dior’s beloved Saxe porcelain flowers, this gilt-bronze stopper put the spotlight on the rose, even though it was for a perfume themed around lily of the valley. This is unsurprising given that lily of the valley is a mute flower that resists extraction; therefore, it needs help from other flowers, such as rose or jasmine, to evoke the olfactory facets of its sweet little bells. The rose remains queen of the garden and draws out nobility and harmony from her subjects.

In 1963, the combination of Baccarat crystal and gilt bronze was selected again for the special edition of the Diorling perfume, which echoed the form of a nineteenth-century silver bottle delicately topped with a rosebud. The motif is more discreet and moves away from the gold of Versailles. The grand floral and baroque effects of the 1950s made way for roses that were no longer held in bouquets. A single flower sufficed for seduction, as witnessed by René Gruau’s advertising drawings and by Sofia Coppola’s 2011 short film Dior: Miss Dior, starring Natalie Portman and featuring Grace Jones’s cover of Edith Piaf’s La Vie en Rose as its soundtrack. 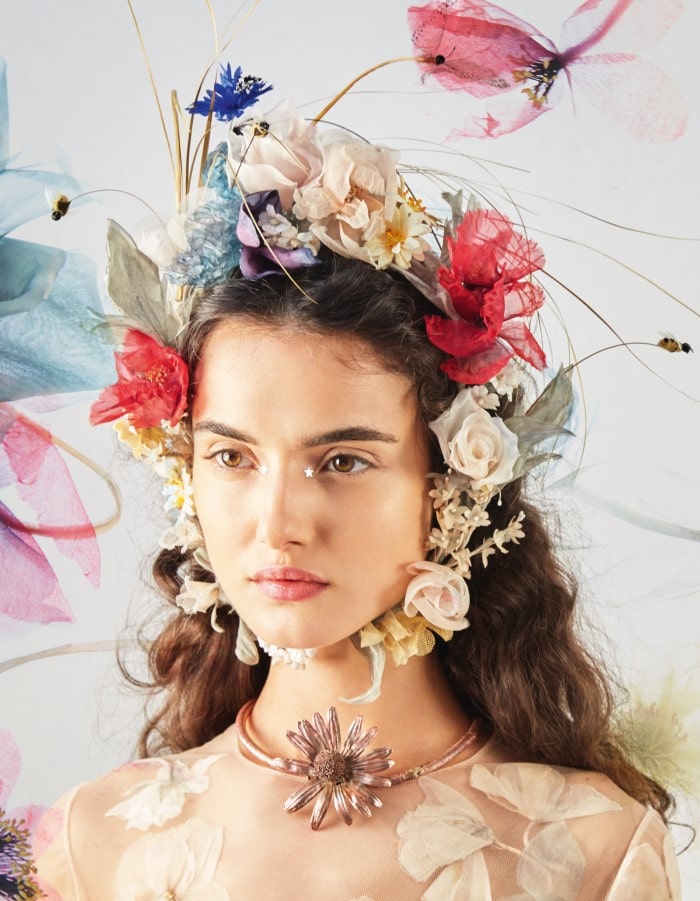 A headdress made of silk wildflowers and adorned with bees from the Spring-Summer 2017 Haute Couture collection © Dior, Tierney Gearon

A Portrait in Scent

Like an olfactory connecting thread, the rose is omnipresent in the scents dreamed up by the Dior firm’s creative perfumers, from Miss Dior Originale to the recent Rose Kabuki and Rose Gipsy created by François Demachy for the Maison Christian Dior collection. Roses have been farmed ever since the one of Christian Dior at his La Colle Noire estate at Montauroux in Provence. Christian Dior Parfums has been developing partnerships with flower producers since 2006. The Domaine de Manon in Grasse and the Clos de Callian both now grow jasmine, tuberose, and cabbage roses exclusively for Christian Dior Parfums.

This firm rootedness in history has inspired a perfume dedicated entirely to the Grasse rose. Created by François Demachy in 2016, La Colle Noire is a portrait in scent of “the cabbage rose that has taken over Christian Dior’s garden in Montauroux,” says the perfumer. “It’s an extraordinary moment when its full-bodied, fruity, honeyed fragrance wafts through the air. This perfume is an ode to that magical place and to the unique rose that grows in the region where I grew up.”

These farming businesses are also involved in the skin care ranges and the production of Jardin de Granville roses that was set up in 2020 a few miles from the Les Rhumbs Villa. All of these are new chapters in the wonderful history of a passion for roses and the locations for its creative expression.