Following Picasso on the French Riviera 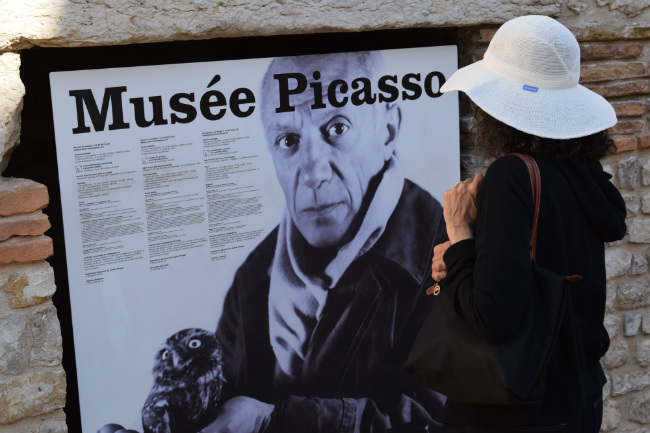 The first question most people ask me about my novel, Cooking for Picasso, is usually, “Where did you get the idea for this story?” And I can’t help thinking, “The inspiration was right there on the French Riviera just waiting to be noticed, so perhaps it found me!”

It all began in Antibes. While traveling along the bright blue Mediterranean coast with its glittering sea, I glanced up at an enormous image of a face on a museum banner, staring back at me with dark, compelling eyes. It was Pablo Picasso, and the museum banner was for the famed Château Grimaldi. Shortly after the second World War ended, when paint and canvases were in short supply, Picasso had painted murals upon those very walls and whatever other surfaces he could find. Now this castle is called the Musée Picasso.

“Who are you looking for?” his challenging gaze seemed to ask. And soon enough my answer was, “You!” 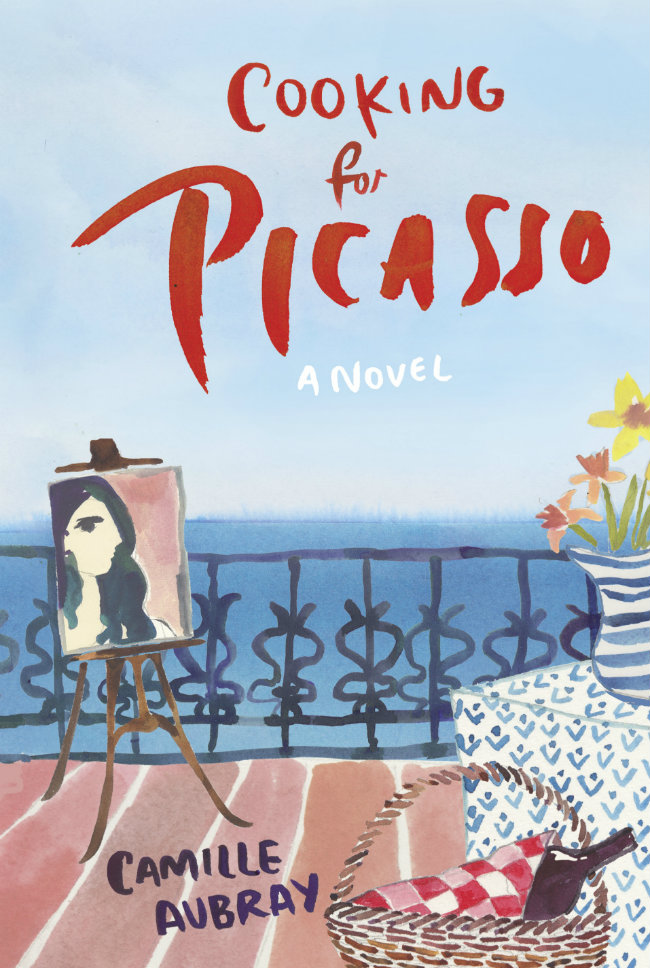 For, in researching Picasso’s many years of residence on the Côte d’Azur, I discovered a true but little-known fact: in 1936, Pablo’s life in Paris was in such utter turmoil that he’d actually stopped painting. His wife Olga, the Russian ballerina, discovered that Picasso’s young mistress, Marie-Thérèse, had given birth to a daughter. Olga began separation proceedings, and once the lawyers got involved, the endless legal wrangling was just too much for anybody, let alone a highly sensitive soul like Picasso; because, perhaps more than other artists, for him the personal life and the professional life were indelibly intertwined. Stressed out and desperate for relief, Pablo secretly slipped out of Paris by train. The surname of Picasso is actually his mother’s family name; so now he traveled under his father’s surname, Ruiz, as a way to remain anonymous. The mysterious Monsieur Ruiz rented a villa in the seaside town of Juan-les-Pins during the less-touristy season of spring. No one knows for sure what happened during this reclusive interlude—but whatever it was, it enabled him to pick up his brush and begin painting again. Within a year he would produce his masterpiece, Guernica. 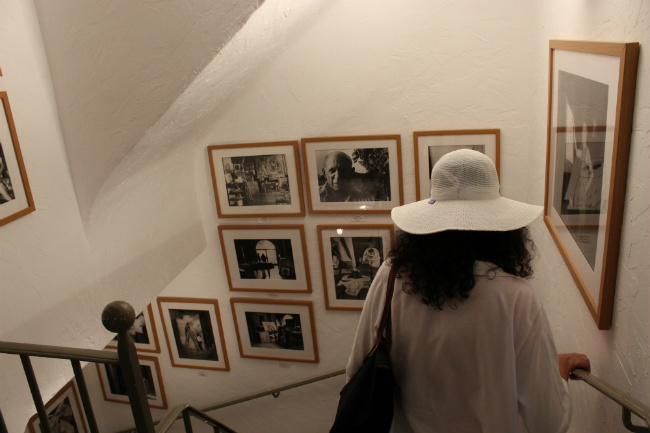 The Museum of Photography in Mougins, France. ©Camille Aubray LLC

That little biographical tidbit was enough to set my imagination on fire. Furthermore, as I delved into the unusual artwork that Picasso created during this interval, I learned another intriguing detail: he’d made a pair of paintings of a dark-haired, unidentified woman. People still wonder today—who was she? Because of her hair color, some say she was the photographer Dora Maar who was soon to become Pablo’s new mistress and muse. Others say it was the brunette sister of Marie-Thérèse. But I knew exactly who that enigmatic model was—my heroine, for I now felt free to invent a fictional character.

Surrounded by the irresistible cuisine of the South of France, with its prodigious food markets everywhere and its lively cafés, I asked myself one key question: Who fed Pablo Picasso? If he was in hiding, he’d be careful about dining out too often and being recognized. So, who cooked for him? 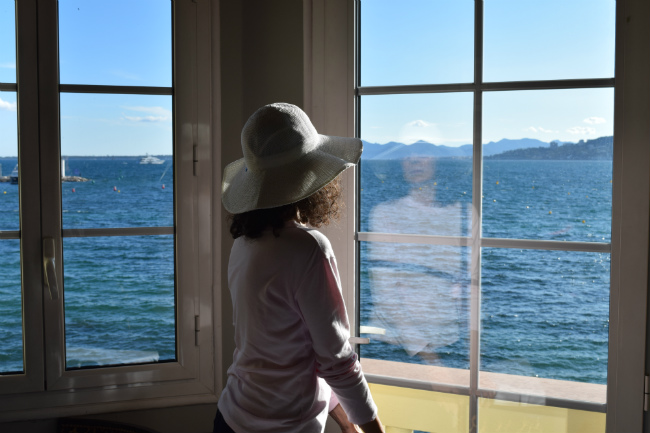 As I roamed the village of Juan-les-Pins and its cafés, I envisioned a local girl, Ondine, riding a bicycle with a hamper of food, pedalling to the beautiful surrounding villas, with their high stone walls spilling over with flowers—and secrets. I imagined that my young heroine’s Provençal cuisine and her very presence would be the flame that reignited Picasso’s creative fervor; and that he, with his brilliance, forceful personality and absolute dedication to his work, would in turn inspire Ondine to greater risks and heights. Bouillabaisse, bourride, tapenade, pissaladière, tartines, ravioli, beef daube . . . these iconic dishes all found their way into my novel at key moments in the story. Meanwhile my readers would meet some of the Côte d’Azur’s most famous residents: Henri Matisse, Jean Cocteau, and of course, Picasso’s women. 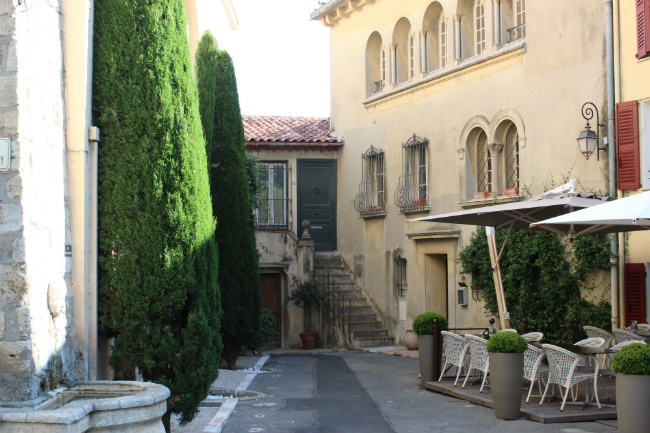 A café in the South of France that inspired the novel’s setting. ©Camille Aubray LLC

For, as one of the characters in my novel says, “Picasso changed houses as often as he changed women.” Going up and down the coast of the French Riviera and its hilltop villages, you can pick out multiple towns where Picasso lived for various periods—with various ladies. My research took me from the beaches and cafés of Antibes and the fishing town of Juan-les-Pins, to the food markets and museums of Nice, Ménerbes, Golfe-Juan, Cannes. And of course to the pottery town of Vallauris, where Pablo lived with his mistress, the artist Françoise Gilot. It was all so intriguing, for, as another of my characters in Cooking for Picasso says, “There was a lot of overlap with Picasso’s women—he kept them on the hook and played them against one another.”

In writing about my heroine Ondine, I wondered, how would she survive her intense encounter with Picasso? I knew the impact would be life-changing, so I decided to follow her—and Picasso—through the years, revealing other crucial moments that helped Ondine to mature into a courageous adult whose ambitions intersected with Picasso at times that were also greatly significant in his life. And, in following Ondine’s lifetime, it was natural for me to think about how her adventures with Picasso might also affect her daughter Julie, and even her American grand-daughter, Céline. 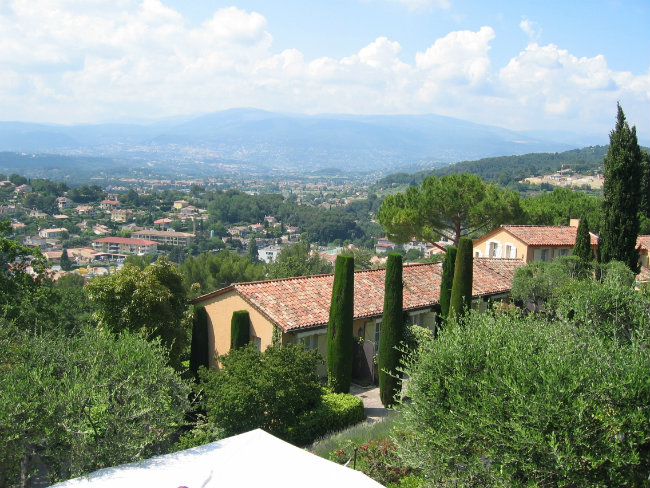 A view from a mas hotel in Mougins, France. ©Camille Aubray LLC

This finally led me to the hilltop village of Mougins, where Picasso lived with his second (and last) wife, Jacqueline, in a house they called Notre Dame de Vie. Here the great artist died in 1973. Mougins has for decades been a center of gastronomy, so it was a perfect locale for my novel. Drawing on my experiences writing and producing for film and TV, I envisioned Ondine’s modern-day grand-daughter as a freelance Hollywood makeup artist who feels compelled to find out what happened when her Grandmother Ondine crossed paths with Pablo Picasso. So Céline enrolls in a cooking-class-travel-package deal, held at a mas hotel in Mougins, run by a fictional, attractive but temperamental British chef. Unlike her Grandmother Ondine, Céline has no natural talent for cooking, and this will sorely try the patience of her Michelin-starred chef. But Céline and Gil find other reasons to overcome their mutual wariness and to help each other. 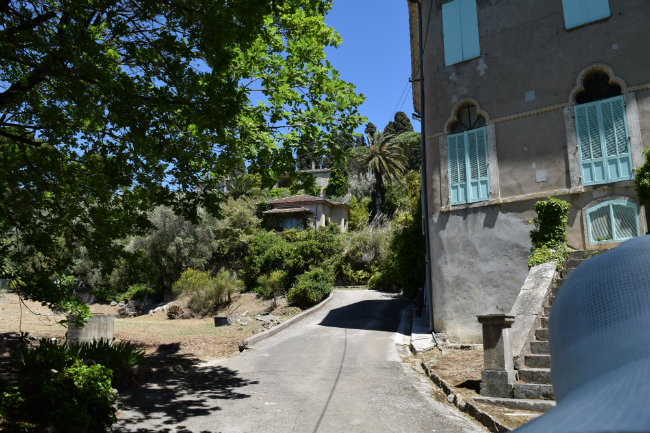 For my research about the subtleties of French and Provençal cuisine, I sought out several French chefs who generously invited me into their kitchens, from the Michelin-starred chefs Didier Aniès of the Grand Hotel du Cap Ferrat, and David Chauvac of Le Mas Candille in Mougins, to Jacques Pépin, onetime chef to Charles de Gaulle and now a revered television personality—who told me that my novel made him homesick for his mother’s coq au vin. I found these brilliant artists of cuisine to be more soulful, modest and practical than popular culture imagines great chefs to be. 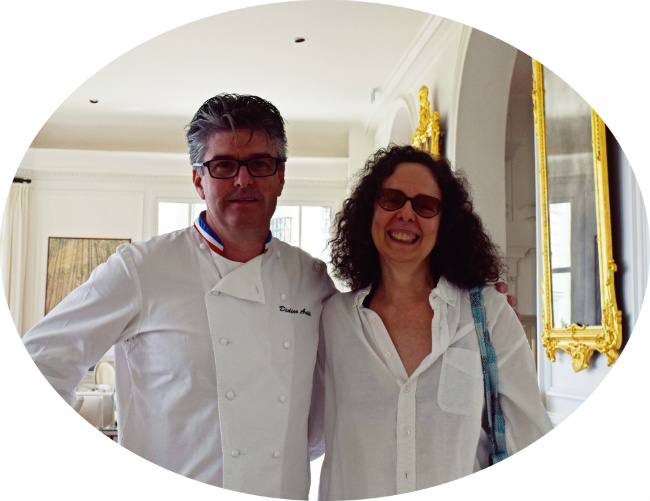 Following in Picasso’s footsteps on the Côte d’Azur led me to richer experiences than I could possibly have imagined when I first began my journey. To this day there are enduring signs of his vitality, his art and his verve, in the many statues, paintings, pottery and murals he bequeathed to the various towns and their museums. All you have to do, as the French author and Riviera resident Colette once advised, is, “Regarde!” Yes, just “Look!” Readers have already begun to tell me, “I took your book along with me, as a travel guide speaking in the voice of a trusted friend.”

And so merci, Picasso, for helping me to connect with all these kindred souls who, like me, can’t resist the lure of la joie de vivre on the French Riviera.

COOKING FOR PICASSO was selected by People Magazine and The Washington Post for their Best Books 2016. Visit Camille Aubray at her website, www.camilleaubray.com 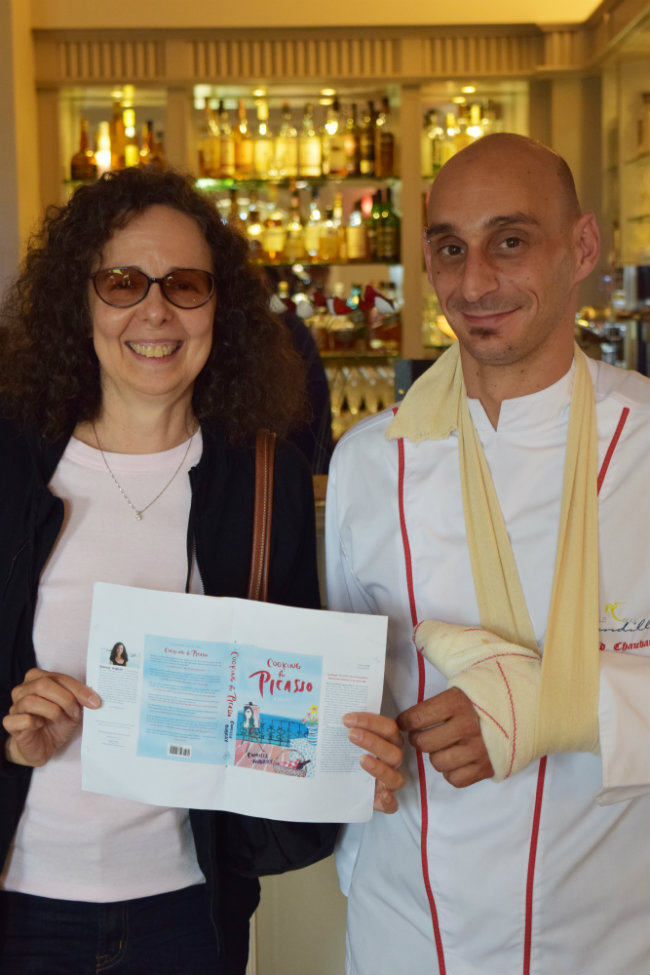 Previous Article 8 Great Places to Stay in Paris
Next Article The Carrefours of France in San Francisco: Bush and Grant

Camille Aubray is the author of COOKING FOR PICASSO, a novel which was selected by People Magazine and The Washington Post for their Best Books 2016.