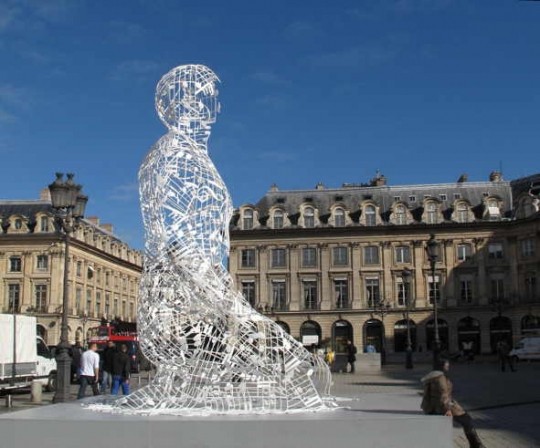 There’s a monumental treat in store for visitors to Bordeaux this summer. Eleven huge sculptures by Catalan artist Jaume Plensa are exhibited in public spaces all over the city. They represent human figures or heads, some almost 7 meters in height, often encased in a mesh of alphabet characters or symbols and invariably imbued with a meditative  stillness.

From the understated bio on the artist’s website we learn that Jaume Plensa was born in Barcelona in 1955. He has lived and worked in Berlin, Brussels, England, France, USA, and he currently shares his residence between Paris and Barcelona.

Plensa has been a teacher at the École Nationale des Beaux-Arts in Paris and has also been a lecturer at many universities and art institutions.  He collaborates as professor invited at the School of the Art Institute of Chicago and since 1992 he has obtained various distinctions and awards, both national and international, notably his investiture as a Chevalier des Arts et des Lettres by the French Ministry of Culture.

Through the eye of the artist

In an interview for FranceBleue, the soft-spoken humanist artist said that this was the first time that his works are shown in an urban landscape where he got to choose the sites, “it creates a dialogue between the art and the people in the city.  In a way it’s a fresh opportunity to rediscover the city anew, through my eyes.” Dialogue and communication are a thread through his work. He oftens refers to language as the one feature that disinguishes humans from other animals, and to the way that letters connect to form words as a metaphor for the links between individuals that form a community.

This is the last leg of a journey that took these works from Rio to Salzburg and Yorkshire. Three of the works are new and are shown for the first time in Bordeaux before they go to their private owners in October. There is a parallel exhibition at the Hotel de Ville showcasing the artist’s methods through a collection  of his preparatory models and sketches for his internationally acclaimed installations around the world.

More about the artist on www.jaumeplensa.com

It is also possible to discover the works of art as part of the general tour of the city every day at 10am, 3pm and 9pm during the heritage tours.

Previous Article The Catalan Canvas of Collioure
Next Article Marianne