The Catalan Canvas of Collioure 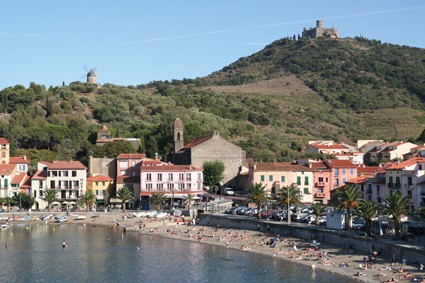 The Petit Train Touristique – the local answer to the open-topped bus – is demurely sedate and not very cool. Unless, that is, you board its dinky white and yellow carriages in Collioure for a whistle-stop tour through the vineyards that hang on to the Pyrénéan foothills as they clamber out of the Mediterranean. “Don’t be alarmed!” quips the driver as we teeter along the Chemin de la Galère (road to the galley) and embark on a series of hair-raising bends. I smile bravely but my hands clutching the sides of the carriage are a bit of a giveaway. “If you don’t like it, I can reverse back down,” he suggests as we wriggle on, higher and higher. At the top there is a brief moment of respite when he lets us out to take pictures before it’s all go again and we spiral back down to the coast.

No, it’s not very cool, but it makes a terrific introduction to the little Catalan port. Above our heads is Fort St-Elme, built by Emperor Charles V to defend the coast when Roussillon belonged to Spain. Far below lies the massive bulk of the Château Royal, conquered and reconquered many times as it changed hands between Majorca, Aragon, Spain and France. Etched into the schistous hillside, gnarled Grenache vines are still tended by hand, just as they have been since the Greeks and Phoenicians discovered the wine-growing secrets of this arid terrain, blasted by the fierce Tramontane wind and grilled by the sun. The last stretch takes us along the quayside of Port-Vendres, where the juxtaposition of fishing boats, leisure craft and a huge cargo ship tells a different story again. And finally the Petit Train reverts to type with a gentle spin along the corniche, back to the scalloped bays and colourwashed houses of Collioure.

We’re not the only tourists, far from it, even in September when law-abiding French kids are tucked away in school. Yet in some ways the streams of strolling visitors are part of the charm. How else could a community of some 2,700 inhabitants sustain so many enticing waterside restaurants? What would happen to the art galleries that squeeze into twisting, flower-filled alleyways if no one popped in to take a look? For Collioure is a place to be savoured slowly, like the vin doux naturel that comes from those steep slopes of schist. Although we could sample all manner of watersports, somehow we never get round to it. There’s too much else to do. Like watching the comings and goings of the harbour from a tree-shaded bench beneath the castle walls. Or dawdling over a café Liégeois a few yards from the spot where the clock tower of Notre Dame des Anges church dips its toes in the sea.

This iconic landmark started life as a lighthouse and the nave wasn’t added until 1684 following the demolition of the parish church to make way for new defences. By now the Treaty of the Pyrénées had brought Roussillon under French control and it has remained so ever since. But its Catalan identity is as strong as ever. You hear it in the language, you see it in the red and yellow bunting and circle dances called sardanas, you taste it in the food.

Ah the food! Fleshy tomatoes and luscious peaches robed in patriotic colours are charged with all the flavour of the sun, cured sausages come in all shapes and sizes and there are olives galore. We savour seared squid à la planxa in one restaurant, zarzuela fish stew in another. For the rest of our stay a trip to the fish market in Port-Vendres becomes a daily treat. Shall we have monkfish or sea bream, tuna or ray? What about those crabs the size of dinner plates? Do we fancy oysters, mussels or clams? There are cooked dishes too and an assortment of tapas, all delicious, all straight from the sea. “It breaks my heart to hand these over,” says the woman behind the counter picking out two magnificent crayfish. It doesn’t break mine.

Of course, you can’t come to Collioure without tasting anchovies, the local delicacy par excellence since medieval times. In the early 1900s hundreds of women were employed to gut, salt and lay out millions of silvery fish brought ashore by their menfolk in gaily-painted barques catalanes. Nowadays, only two salting houses remain, but they continue to prepare Collioure’s signature product in the time-honoured fashion – by hand. “You can’t do it any other way. Anchovies are very fragile,” explain two nimble-fingered women who work above the shop of Ets Roques to demonstrate the painstaking processes to visitors.

The town’s other enduring claim to fame is art. It all began in 1905, by which time Port-Vendres had taken over as the area’s number one port and Collioure had slipped into obscurity. Then Henri Matisse turned up, seriously short of cash and even shorter of inspiration. Knocked out by the sizzling Mediterranean colours and azure luminosity he summoned André Derain to join him and the two friends embarked on an intoxicating summer of frenzied experimentation. Their simplistic style and avant-garde use of primary colours earned them the sobriquet Les Fauves (the Wild Beasts). Other big hitters followed – Dufy, Braque, Chagall and many more – keen to explore the now famous interplay of sunlight and sea.

But it’s the two pioneers that Collioure chooses to honour with 20 reproductions placed at the spots where the originals were created. The artistic tradition continues today and easels lurk in every picturesque corner. In more workaday Port-Vendres it’s Charles Rennie Mackintosh who holds centre stage. Having seen his extraordinary watercolours at an exhibition in Edinburgh’s Dean Gallery, I’m fascinated to compare his arresting compositions against the reality.

And so the week drifts by in a languorous haze interspersed with occasional bursts of activity. We take a boat trip to Cap Béar, we visit the Cellier des Dominicains to taste red, white and rosé AOC wines, we get lost in the castle’s cavernous rooms and crumbling stairways. And no day is complete without a swim. Not for us the crowded beaches of Collioure, however. We’re much happier sharing the clear waters of a rocky creek with darting fish and spiky sea urchins – although it has to be said that the vicious barbs of the latter send us scurrying to the shops for jelly shoes.

On the last afternoon we just sit and stare, trying to lock the images in our minds. The russet-tiled rooftops and ochre walls. The rugged outline of Fort St-Elme on its hilltop perch. The glint of sunlight on a diaphanous sail. As evening approaches the cobalt sky is suffused with pink before velvety darkness envelops the “city of painters”. From below the plane trees comes the familiar clink of silver boules, in the distance we spot the tell-tale twinkle of a lamparo light, the traditional ruse used by fishermen to mimic the moon and lure fish to the surface. The barques catalanes that once lined the shore may have given way to sun loungers and parasols, but Matisse and Derain would still recognise the town that launched their careers.

By air: Perpignan airport. Take the airport shuttle bus to Perpignan rail station, which operates a regular SNCF service to Collioure.
By road: the A9 motorway runs along the Languedoc coastline. Exit at Perpignan Sud and take the D900 followed soon afterwards by the D914 and finally the D119 on the outskirts of Collioure.
By rail: from Paris by TGV to Perpignan. From there, use the local SNCF service.

Set into the hillside above the Plage de la Balette, the four-star Hôtel Relais des Trois Mas (tel +33 (0)4 68 82 05 07  www.relaisdestroismas.com) enjoys a stunning location with direct access to the beach.

A little further up the hill, the two-star Hôtel Les Caranques offers simpler, cheaper accommodation but the views are just as enticing (+33 (0)4 68 82 06 68  www.les-caranques.com).


Delve into the history of Banyuls and Collioure wines and put your taste buds to the test at the Cellier des Dominicains (www.dominicain.com; tel +33 (0)4 68 82 05 63).
The tourist offices of Collioure and Port-Vendres have leaflets on the Chemin du Fauvisme and the Chemin de Mackintosh respectively. Visit the Museum of Modern Art (00 33 4 68 82 10 19) to discover works by contemporary artists. For masterpieces by Picasso, Herbin and Chagall et al, Céret’s wonderful Modern Art Museum is only 34km away. (tel +33 (0)4 68 87 27 76  www.musee-ceret.com) or visit the Château Royal, open all year from 10am- 6pm, which hosts temporary exhibitions.
Petit train touristique: The 45-minute round trip operates several times a day from April to November. (tel +33 (0)4 68 98 02 06  www.petit-train-touristique.com).
From scuba diving to sailing, every conceivable activity above and below water is available in Collioure itself or nearby.
Collioure Tourist Office: Place du 18 Juin; www.collioure.com tel +33 (0) 4 68 82 15 47.
Pyrenees-Orientales Tourism: www.tourisme-pyreneesorientales.com tel +33 (0)4 68 51 52 53.