Why it’s a Great Time to Visit Auvers-sur-Oise 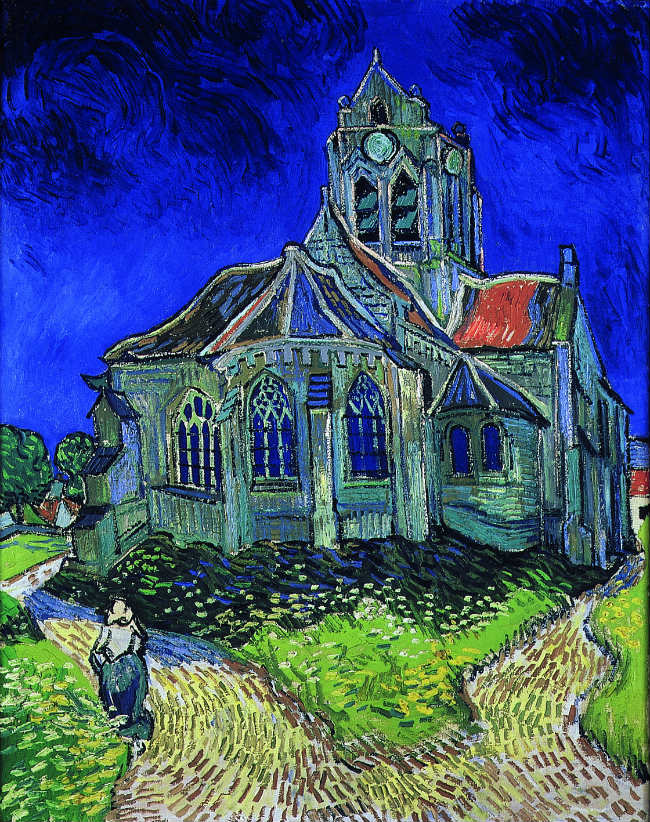 Long revered by art lovers for its van Gogh connection, charming Auvers-sur-Oise is busy talking up its Impressionist pedigree – and it’s something worth shouting about.

We’re going to go ahead and say it: the pretty little town of Auvers-sur-Oise, less than an hour from Paris by train, is one of the capital’s star day trips. Its fame was founded on Vincent van Gogh’s stay here, but the town has an artistic pedigree that goes well beyond the beloved post-Impressionist. A season of cultural events and an impressive new high-tech art experience make this a great time to schedule a visit to the village Vincent described as ‘gravement beau’.

This is Impressionist country. After the train came through in 1846, it became a popular spot for Paris painters searching for bucolic rural landscapes. One of the country’s most admired pre-Impressionists, Charles François Daubigny (you can see a couple of his works in the Musée d’Orsay) made a home here in 1861; it became the town’s first artist’s salon, a hangout for friends like Jean-Baptiste-Camille Corot and Honoré Daumier. They helped paint the charming murals that decorate the walls of what is now Maison-Atelier Daubigny; when you visit, you’ll feel like you’ve stepped back in time to join them. The centrepiece studio, with its tall ceilings and 5m high windows, is a richly decorated workspace-living area, a glimpse into how artists of the time worked, lived and socialised. 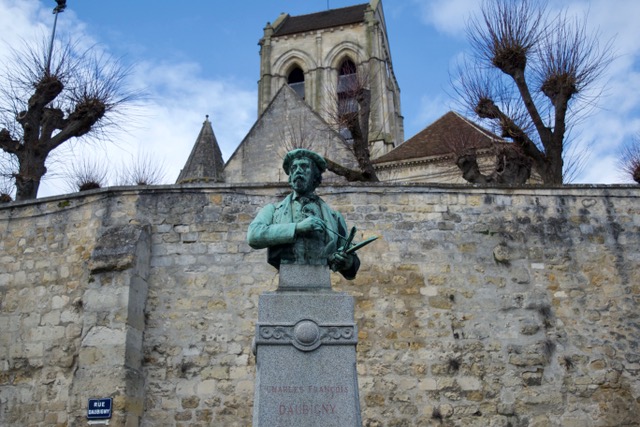 A statue of Daubigny in Auvers-sur-Oise. Photo: Janine Eberle

Daubigny’s house is one of three ‘Maisons des illustres’ (‘Houses of the Greats’) in Auvers – more than anywhere else in Ile-de-France (except Paris). Earlier this year, the Maison Docteur Gachet and the home and studio of post-Impressionist Émile Boggio were awarded the label. It denotes homes that are remarkable for their association with a particular personality, and conserved with special care to retain their historical feel. For visitors, it guarantees a back-in-time experience with a special, cultural resonance.

Dr Paul Gachet is a fascinating figure, pivotal in the story of Vincent van Gogh in Auvers. A passionate amateur artist himself, he was a great supporter of the Impressionists, and doctor, friend or both to Manet, Pissarro, Renoir and Cézanne, amongst others. His habit of accepting works in exchange for treatment led him to amass an expansive collection of Impressionist art (eventually left to the Orsay). 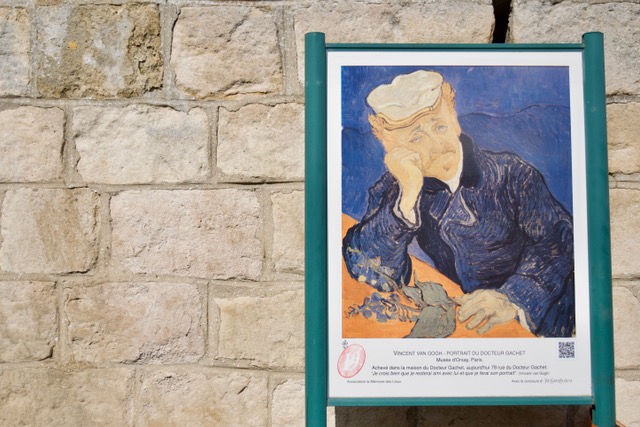 Dr Gachet, pictured here in a Van Gogh portrait, was a great supporter of the Impressionists. Photo: Janine Eberle

He was also a specialist in the then poorly understood area of nervous disorders, and his interest in the subject, certainly before its time, is explored in the current exhibition at his former home: Melancholia – Art and Psychiatry in the 19th century. With dozens of artworks and contemporary documents, as well as Gachet’s own drawings of patients at the Hospital Salpêtrière, the exhibition is a fascinating exploration of the interplay of art and mental illness at a time when the mind-twisting effects of absinthe and syphilis were wreaking havoc on the artistic and bohemian classes.

Dr Gachet’s presence in Auvers – he moved here in 1872 – was one of the reasons Theo van Gogh, Vincent’s long-time benefactor, suggested the town as a much-needed refuge for his troubled older brother. Vincent was fresh from a year-long stay in a Provence asylum, and he needed to be closer to Theo, in reach of medical treatment, somewhere restful and picturesque with an artistic community. At first it seemed the perfect retreat – Vincent was out early each day with his easel and paints, capturing every detail of the village and its surrounds. He made 80 paintings in his 70 days here, in the most intense burst of activity in his short artistic career. 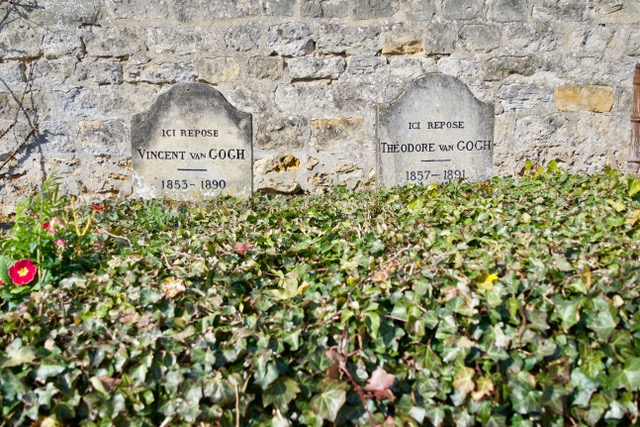 The graves of Vincent Van Gogh and his brother Theo are side by side in the cemetery. Photo: Janine Eberle

But all was not well. Vincent appeared at his residence, Auberge Ravoux, on a Sunday evening in July 1890, with a bullet wound to the stomach. He died almost two days later, untreated, in his 3.50 francs-per-night room. It has never been rented out since, and is now Auvers’ prime pilgrimage place, this tiny skylit room where the art world’s premier suffering genius ended his short, tumultuous life.

Just as evocative are the panels scattered around the town showing his paintings, placed in the very spot where he made them. The church at Auvers, the little town hall, the fields overhung with a flock of black crows, all immortalised in Vincent’s dramatic vision, are stops on a poignant art tour that ends at the towns’ little cemetery, where Vincent is buried side-by-side with his brother Theo.

Vincent’s death here made it an art pilgrimage place. But as the new exhibition at Château d’Auvers-sur-Oise demonstrates with brio, Auvers’ claims as art village go beyond his intense, doomed stay. The exhibition does not rely on painted works (although it has a few), but on state-of-the-art installations using light and sound to immerse visitors in the history, the colours and the emotion of Impressionist art. 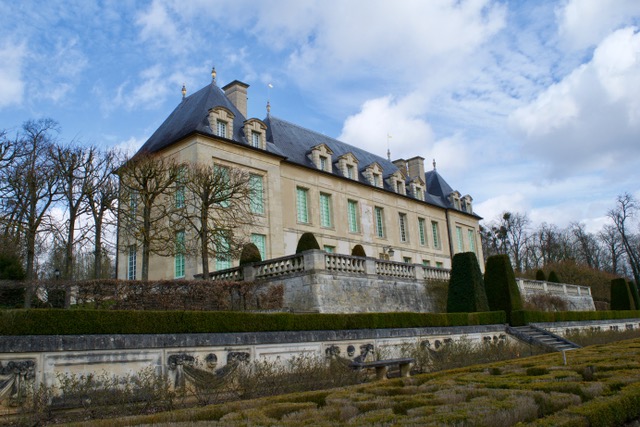 It’s hard to believe in world of Renoir tote-bags and Monet drink coasters, but Impressionism once represented the avant-garde, shunned and ridiculed by the establishment. This exhibit dynamically narrates how it turned the art world upside down, and the role this little corner of the countryside played. From the rarefied world of the Paris Salon to the landscapes of the Oise Valley, and an examination of the development of post-Impressionist styles, the immersive exhibition provides a fascinating counterpoint to the town’s more home-spun sights.

Of those, the Maison-Atelier Émile Boggio, the third of Auvers’ ‘Houses of the Greats’ is a resonant link between the town’s artistic history and present. It was the home of the eponymous Italo-Venezuelan artist who lived here for 10 years until his death in 1920. The apple tree in blossom that he was painting when he died is still on the easel in his studio, surrounded by other works, photos, books, an ordered jumble of his personal items. The artist’s space, as it was when he worked here, with its intimate, peek-behind-the-curtain feel. Downstairs, the works of painter and sculptor Xavier Boggio are displayed. Émile’s great-grand-nephew, he lives and works here, keeping the link with the past alive. 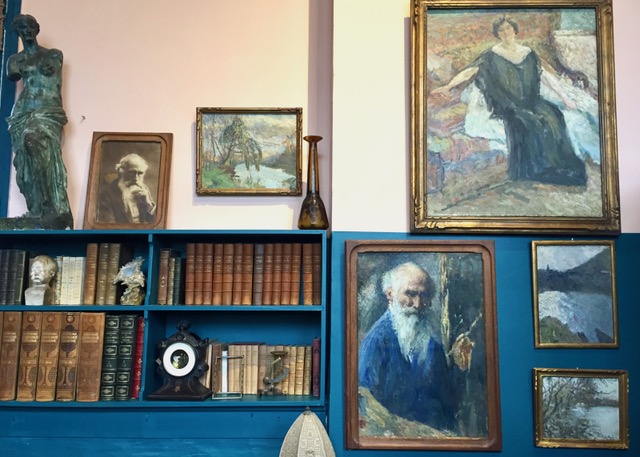 Maison-Atelier Émile Boggio is the third of Auvers’ ‘Houses of the Greats.’ Photo: Janine Eberle

Other things to see in Auvers-sur-Oise:

At the Musée Daubigny is ‘Marine Impressions’, which follows Daubigny and his contemporaries Corot, Courbet and others as they travel to Normandy to discover the sea and render its atmosphere and light with their emerging Impressionist sensibilities.

The Musée d’Absinthe is a fascinating, extensive private collection of absinthe paraphernalia, contemporary posters and media, and artworks chronicling and celebrating the drink’s chequered past as life of the Belle Époque party, glamour icon, demon drink and home-wrecker. Taste it for yourself, from a vintage absinthe fountain, in the peaceful garden.

Le Nymphée, the restaurant at the Chateau d’Auvers, serves contemporary French cuisine putting local produce at the centre of the plate – the best gourmet lunch in town.

Previous Article Things to See and Do in the Berry Province of France
Next Article The Top 3 Road Trips in France: A Driver’s Heaven