The Changing Face of Paris 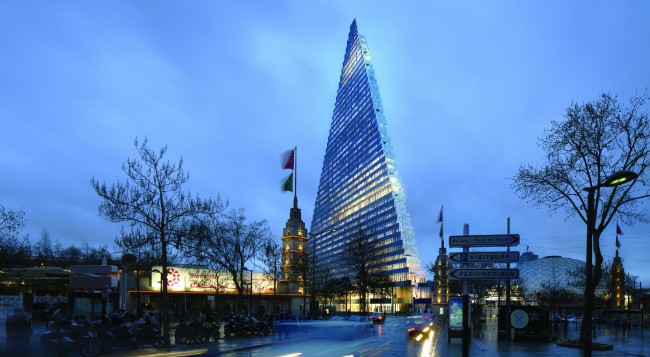 A Paris City Council vote by secret ballot in November 2014 effectively closed the book on the ‘Tour Triangle’, the most significant skyscraper project in the capital since the Tour Montparnasse opened more than 40 years ago. Proposed for a nondescript and largely residential area at the edge of Paris’s 15th arrondissement, the gargantuan, glass-clad, 180-metre-high pyramid by the Swiss architects Herzog & de Meuron ignited ferocious controversy, galvanizing forces for and against, and reopening the old contentious arguments about marring the Paris skyline and casting a massive shadow over the neighbourhood.

But as the victors triumphantly flashed their ‘non’ ballots just long enough for a photo op, Paris Mayor Anne Hidalgo, a staunch supporter of the tower – which had been a rallying point in her successful bid for election in March 2014 – got precisely the loophole she needed. Hildago immediately launched an appeal to annul the vote and in the intervening months worked behind the scenes to broker a deal, persuading Unibail-Rodamco, the developers of the €500-million project, to agree to some of her opponents’ conditions, namely to reduce the office space by 70,000sqm and add a 120-room, four-star hotel.

On June 30, in a stunning about-face, the City Council voted 87 to 74 in favour of the tower, which according to Hidalgo, will create 5,000 jobs in construction and another 5,000 after the skyscraper’s completion in 2020.

June was either a very good month or a very bad month for Paris, depending upon whom you ask. Eleven days before City Hall’s Tour Triangle victory, luxury behemoth LVMH’s proposed €470-million transformation of the landmark La Samaritaine department store, which shuttered in 2005 due to structural and safety issues, was finally approved after a four-year bureaucratic circus that pitted Bernard Arnault, the head of LVMH and France’s richest man, against two respected preservation groups and local residents. Supporters of the project, including an enthusiastic City Hall, embraced the ethereally contemporary design as a symbol of Parisian innovation and forward thinking. The opposition fixated on a 73-metre-long, 25-metre-high, undulating glass wall, a highlight of the design by the prestigious, Pritzker Prize-winning Japanese architectural firm Sanaa. Referring to the glass facade as the “shower curtain”, adversaries focused their argument on the avant-garde design’s aesthetic departure from La Samaritaine’s original Art Nouveau and Art Deco buildings.

Though it was pure coincidence that these two major projects – in the pipeline since 2008 and 2010, respectively – would be approved within weeks of each other, the message wasn’t lost on Parisians: the city is poised to move with the times, with the full muscle of City Hall behind it.

Though several projects which triumphed over fierce opposition have come to be embraced by Parisians, and even become emblematic of the city – IM Pei’s pyramid at the Louvre and the Centre Pompidou, to name the two most famous – it’s the disasters that loom large in collective memory. And there are many. A few blocks from La Samaritaine, the Forum Les Halles – an ugly 1970s-era mall and transport hub which replaced the 19th-century cast-iron food pavilions – is set to reopen in 2016, after a six-year, €1-billion facelift that features a graceful, soaring canopy designed by architects Patrick Berger and Jacques Anziutti.

Opponents of the new projects are voicing concerns deeply ingrained in the French psyche. Parisians, and the French in general, are much less tolerant of the ‘big money’ and capitalist power brokering which inevitably accompany such projects than, say, Londoners or New Yorkers. Many Parisians argue that projects like the Tour Triangle and La Samaritaine have a limited impact on the majority and stand to greatly benefit relatively few people, despite such symbolic gestures as the 95 social housing units and day care centre which are included in the plans of La Samaritaine. They’re also concerned that they’ll be huge ‘money pits’, like the new Paris Philharmonie by superstar architect Jean Nouvel, which opened two years late and cost nearly €400 million, more than triple the original budget.

Paris also faces constraints that other European cities do not. Virtually untouched during World War 2, it’s one of the few with a large, intact historic centre. Laws to protect this heritage are so strict and convoluted as to cripple new development, but have also proved enormously effective in preserving the cherished uniformity of a city that’s universally perceived as the symbol of luxury, romance, fashion and art de vivre.As the second most visited city in the world – London is first – Paris’s face is its fortune. This is a burden that many Parisians chafe under.

“The gap between Paris and other major European cities is widening. One-by-one, these cities have come to accept an often remarkable contemporary architecture, giving residents and visitors the image of a modern, vital city that responds to its inhabitants changing needs,” opines Manuelle Gautrand, a Paris-based architect who was a vocal advocate of the La Samaritaine project and the renewal of Paris in general. “Our historic heritage must be modernised in order to adapt to our changing lifestyles and to remain vital yet still welcoming. As citizens, we cannot go on adapting to our heritage, our heritage must adapt to us.”

How does a museum city move with the times? This question, which has simmered for over half a century, implies much more than whether a few modern buildings will be built and where. Paris is grappling with major economic and social issues: How to stimulate growth and create jobs? How to attract foreign investment and spur innovation? How to ameliorate the divide between Paris and its suburbs?

As the Deputy Mayor for Town Planning and Architecture, Jean-Louis Missika is Paris’s frontman for a far-reaching urban renewal project which confronts all of these concerns under one sweeping rubric: ‘Le Grand Paris’ (Greater Paris).

“The vote in favour of the Tour Triangle is positive for two reasons: first, this project demonstrates that Paris won’t stay trapped under a ‘glass bell’ by banishing architectural audacity,” he says. “Moreover, a project of this scale, located on the city’s outskirts, shows strong interest in its outer regions, a way to link up with neighbouring municipalities and, therefore, Le Grand Paris.”

The scope of this ambitious, multi-year plan encompasses many aspects of life in Paris and its greater metropolitan area, such as infrastructure, transport, cultural life, new technologies and increased connectivity, higher education and tourism. The plan also takes into consideration sustainability, quality of life and the “regional inequalities” which are exacerbating an increasing sense of exclusion between Paris and its suburbs that sit outside the périphérique beltway.

In a move which exemplifies the spirit of Le Grand Paris, last autumn, City Hall launched ‘Reinventing Paris’, a call for ideas to develop 23 sites in and around the city, with a distinct focus on the periphery, including two 18th-century mansions, a former power station, an old public bath and various “urban wastelands”. Along with architects and urban planners, City Hall encouraged multidisciplinary teams of “farmers, chefs, visual artists, philosophers, fashion designers, conservators, students and professors, gardeners, start-up incubators, etc.” to submit their ideas. Of the 850 applications received from more than 15 countries – as far-flung as Brazil, South Korea, Nigeria, Lebanon and the United Arab Emirates – some 650 were approved. The submissions have since been narrowed down to 75, about three for each site.

Already under construction and scheduled to open in early 2016, the Halle Freyssinet is emblematic of the scope of Paris’s ambition. Set in a huge abandoned shipment hub in a derelict part of the 13th arrondissement that’s long overdue for renewal, the enormous, 33,747-square metre, state-of-the-art building designed by Wilmotte & Associates will house the world’s largest digital business incubator of 1,000 innovative start-ups. The thrust of the project is to encourage and foster entrepreneurship and make Paris “the world’s start-up factory”.

Beyond the City Limits

A cornerstone of Le Grand Paris, which seeks to make the capital a centre for scientific and technological innovation and entrepreneurial investment, is the creation of Paris Saclay University. Situated about 20 kilometres outside Paris, Paris Saclay will bring together two of France’s most prestigious universities, seven public research organizations, 300 laboratories (some with ties to large corporations, such as the energy giant EDF) and the French Alternative Energies and Atomic Energy Commission. Signed into being on January 1 of this year and set to open in 2020, with a projected 15-to-20-year growth period, Paris Saclay will concentrate knowledge and expertise to a degree that’s unprecedented in France. The new university’s set to attract 70,000 students from around the globe to some 550,000 square metres of laboratories, classrooms, housing, public spaces and commercial structures, designed by the likes of Renzo Piano and Rem Koolhaas.

Extending well beyond the city limits, Paris Saclay and several other significant projects in the pipeline will benefit from Grand Paris’s core, €30-billion objective to revolutionise the capital’s transport system. The project, called Grand Paris Express (GPE), is of enormous significance to the city, for obvious reasons.

According to Missika, greater mobility is a key to “reducing the physical and symbolic rupture represented by the périphérique… and providing a framework to link the region’s main economic centres, as well as support local development”.

The €26-billion upgrade includes an automated Métro line to circle Paris, over 200 kilometres of new networks (the equivalent of Paris’s existing Métro lines), service to Roissy and Charles de Gaulle airports, the creation of 57 stations and four additional lines which will able to accommodate two million more passengers per day.

The Greening of Paris

Doubling the number of bicycle paths and opening new east-west and north-south routes for cyclists dovetails with another important objective of Le Grand Paris: to fight air pollution in the city, which, according to Missika, “is a central issue for us”.

“The future of transport in Paris is first about electric mobility,” he explains, “then about sharing and carpooling… new ways of consuming that will gradually reduce the role of cars. Of course the périphérique as we know it will not disappear in a day, but its future is to become an urban boulevard of Le Grand Paris”.

Paris is the least ‘green’ of all the major European capitals, offering only 13.2 square metres of green space per citizen, as opposed to London’s 45, Madrid’s 68 and Rome’s 321. Paris is responding to this acute lack by “encouraging a new approach to existing constructs”, according to Pénélope Komitès, the Deputy Major in charge of Green Spaces, Nature and Biodiversity.

“Our goal is to re-vegetate 100 hectares [250 acres] of roofs and facades,” she says. “Along with a positive impact on the environment, this massive proliferation of vegetal roofs and the development of urban agriculture will be a source of employment and innovation.”

Hosting the COP21 UN Conference on Climate Change in December certainly helped boost Parisian pride, and strengthened the city’s forward dynamic with regard to the environment. But, more than that, the conference focused all eyes on a city that’s cautiously but resolutely moving into the future.