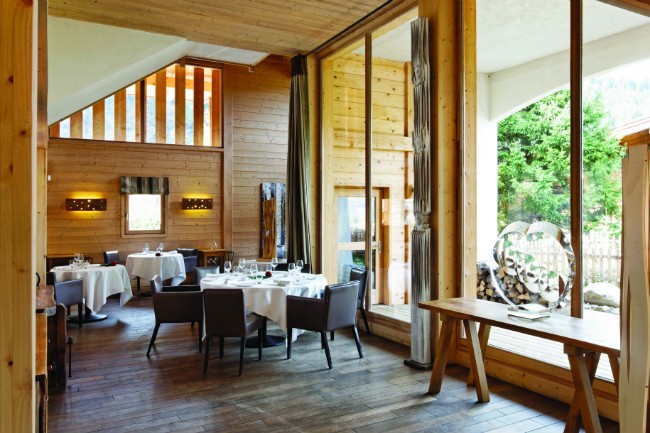 For food-loving travellers in search of a great winter holiday, Megève, possibly the most charming of all resort towns in the Haute-Savoie département of the Rhône-Alpes region, has become the ‘magic mountain’. At his charming hotel-restaurant, perched on a mountain above the town, chef Emmanuel Renaut has not only seen off the idea that skiers aren’t receptive to serious cooking – ie all they want after a day on the slopes is fondue or a pizza – but has also created a new idiom for Alpine gastronomy, one which has won him three Michelin stars.

Arriving at Renaut’s chalet, on a hillside outside of Megève, the raw wood interior of the dining room comes as a surprise, since it ignores Michelin’s preference for pomp and, instead, previews the chef’s proclivity for luminescent simplicity, both aesthetically and gastronomically. The only decorative elements in this airy room, with its cathedral ceiling, are a cuckoo clock or two on the walls, since the real drama comes from the views of the surrounding countryside through its picture windows, and also from what you find on your plate.

The service style here – precise and insistently sombre – conveys the superbly elevated seriousness of Renaut’s cooking. What this native of the Paris suburb of Montmorency has accomplished is pretty spectacular, because after being put on the starting blocks during the years he worked for chef Marc Veyrat, he went on to crack the codes of flavour in traditional Alpine cooking, reduced them to their essence, and then deftly reassembled them in a way which makes for a profoundly regional experience that’s dazzlingly modern.

“Sometimes an outsider can have the most lucidly dispassionate understanding of a region’s cooking,” says Renaut. “What I quickly learned when I first moved to the Alps, though, is that contrary to the prevailing idea that it was for centuries a simple rustic region with a limited larder, it actually has some superb produce beyond its famous cheeses, including the delicate wild fish from its lakes, berries and herbs.”

The menu here evolves with the seasons but the highlights of a recent lunch included two intriguing starters – a stunning composition of wild mushrooms (cèpes and girolles) with a coffee-flavoured sabayon that gently amplified the mushrooms’ tastes, and a ‘biscuit’ of pike perch mousse which came encased in a fine case of toast, with a garnish of grilled onions and lemon balm jus.

The mains were similarly precise and spectacularly subtle, including Omble Chevalier fish from Lake Geneva, cooked in butter and garnished with carrot pasta flavoured with lemon and pine sap, and a fillet of Alsacien roebuck with blueberry purée and a shallot jus, seasoned with juniper berries like a classic sauce Grand Veneur.

Don’t pass up the magnificent cheese trolley, which mostly runs to regional cheeses, including rare ones like Lauges, a little-known cow’s milk blue cheese, and the dessert not-to-miss is the smoked chocolate tart with oak-flavoured ice cream.