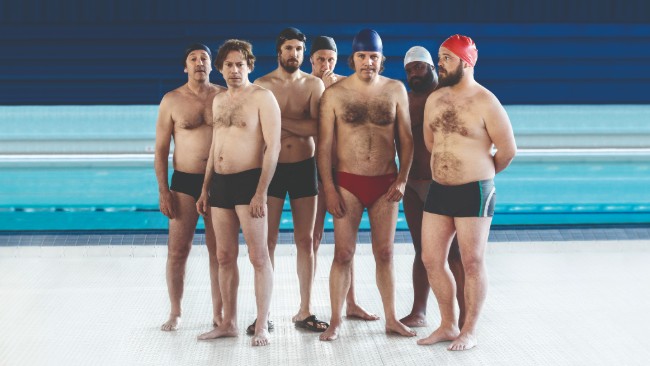 “Going to play Candy Crush all day again?” carps Bertrand’s teenage son in Le Grand Bain’s opening sequence, watching disdainfully as his unemployed father polishes off a bowl of antidepressant-laced cereal. This breakfast of champs duly slurped, the 40-something plops himself back on the sofa, phone at the ready; much to the dismay of his wife, who has spent the last two years trying to get him out of his funk – and the house.

When Bertrand finally does drag himself out, days later, to a perfunctory sick-leave review, he spots a notice at the municipal pool recruiting new members for an all-male synchronised swimming team and signs up on a whim. To his relief, he’s far from the saddest sack – or least coordinated – in the group. His woefully unfit teammates include short-fused divorcee Laurent, failed (but undeterred) rocker Simon, near-broke Jacuzzi salesman Marcus and the pool’s dopey but kind-hearted handyman Thierry. And their coach, Delphine, isn’t much help. The former gold-medallist and recovering alcoholic’s idea of a training drill boils down to letting the ungainly lot splash about breathlessly as she reads them poetry.

Cue cringe-worthy shaping-up montages of the hopeless mermen doing the eggbeater to such musical doozies as Easy Lover. Eventually, Delphine’s whip-cracking, rage-prone ex-swimming partner steps in, transforming them into water nymphs through sheer bullying and brute force (she whacks them in the shins at the merest misstep!) – just in time for the world championships. Far from your usual cliché-ridden, feel-good fare (a lesser filmmaker could have easily been waylaid by the slapstick potential of middle-aged men with saggy dad bods flailing manically in the shallow end), Gilles Lellouche’s directorial debut is surprisingly subtle and tender, deftly moving between hilarity and heartbreak.

Laugh-out-loud funny (Philippe Katerine is a hoot as the bafflingly un-self-aware Thierry), yet never at the expense of the characters – these lost souls are, after all, wrangling to stay afloat in a world that has swallowed them up, wrung them of hope and spat them out – or their physiques, this sure-footed caper is a cult classic in the making. The make-or-break championship routine to, brace yourselves, Olivia Newton-John’s Physical is hands down the barmiest thing we’ve ever witnessed. Pure, unadulterated joy!

Previous Article Valley of Queens: Follow in the Footsteps of the Loire Valley’s Female Icons
Next Article The 130-Year Birthday Celebration for Alliance Française San Francisco