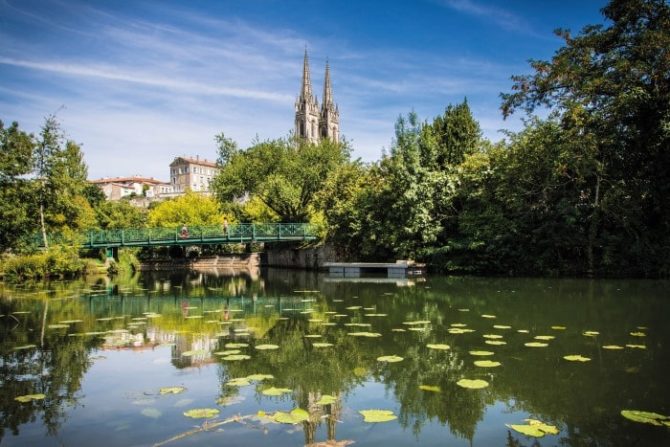 Luscious landscapes, stunning châteaux and hypnotic waterways: spending time in Deux-Sèvres can seem like an Alice in Wonderland experience. Annaliza Davis takes you on a little tour of this enchanting part of France.

Named after the two rivers – the Sèvre Nantaise and the Sèvre Niortaise – that flow through it and nourish the landscape, the département of Deux-Sèvres is richly agricultural, featuring farmland, vineyards, wooded valleys and beautiful riverbanks, as well as fine examples of historic architecture. Don’t be surprised if you find yourself reaching for your camera every five minutes – although no picture will do it justice!

Nestling between La Rochelle, Poitiers and Cholet, Deux-Sèvres is all too often eclipsed by its glamorous neighbouring towns on the coast, or treated as a drive-through area for those heading south. But this is an area scattered with understated, charming villages, breathtaking rural expanses and secret hideaways that make you feel deliciously far from everyday life. With an average of just 62 residents per square kilometre, it offers plenty of space and surprising diversity in its landscapes, architecture and history. 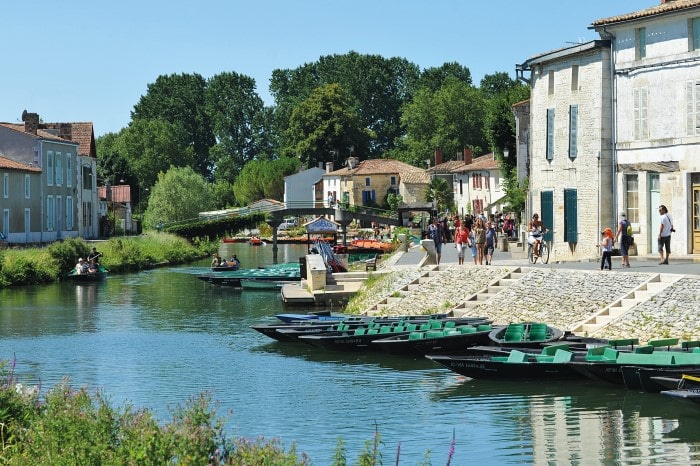 The best-known town in this area, Niort, is also one of France’s oldest, dominated by a castle that dates back to the 12th century and was erected by England’s Richard the Lionheart and his father, Henry II. Nowadays, the castle-keep stands guard over the 60,000 residents and modern offices as well as elegant, Belle Époque townhouses. Be sure to visit the cathedral-like market halls packed with local produce, and the museum in the Donjon de Niort.

On a far smaller scale, the historic town of Parthenay is widely associated with the nearby theme park, Futuroscope, but this modest, fortified town remains a pretty spot well worth a visit. The view over its higgledy-piggledy rooftops reveals the town’s history through its timbered buildings, stout chimneys and terracotta tiles, punctuated with ramparts, castle towers and church spires. 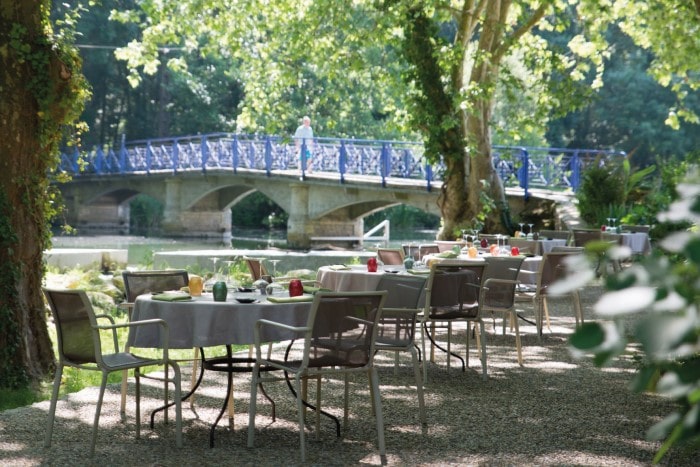 Forget Oxford with its punts and Pimms, one of the highlights of Deux-Sèvres’ wetlands is hiring a traditional chaland. These flat-bottomed boats take you through even the shallowest spots, allowing you to approach the various islands and enjoy a picnic on the banks. They feel nostalgic, allowing you to glide gracefully along the water and enjoy the scenery.

Of course, the expanses of unspoilt natural beauty here make it a haven for walkers and cyclists, not least because of the trails and routes on offer.

There’s an inexhaustible 800km of cycle circuits just in the wetlands of the Marais Poitevin, extending into the Vendée and Charente-Maritime. Leisurely types can explore the maze of waterways to the south, or ask for the Green Way (Voie Verte) trail around Parthenay, as this is based on a former railway line and is therefore relatively flat. Green Ways are only open to pedestrians, push bikes and horse-riders, so they are fantastic for avoiding traffic. Given all the greenery here, there are several places to take a swing on the green, including several 18-hole golf courses, such as the Golf Club Bocage Bressuirais in Bressuire, Golf de Mazières-en-Gâtine, Golf Domaine des Forges and Golf de Niort. Wherever you choose to tee off in this area, you can expect fabulous views and endless skies… 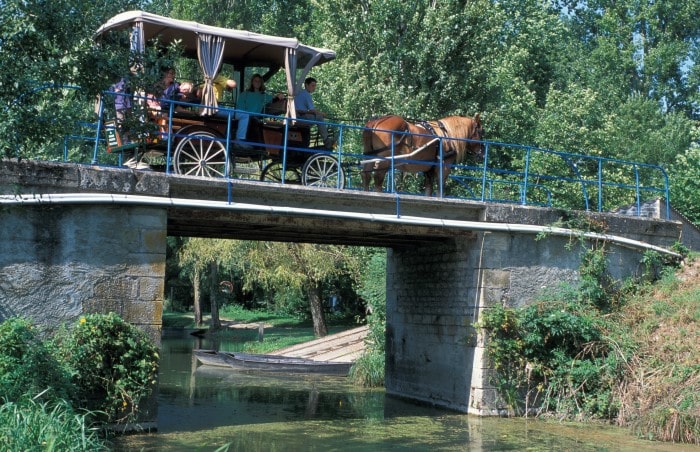 But perhaps you’re happy to leave the outdoor activities to those with more energy? You could always head to one of the riverside restaurants and indulge yourself with a romantic meal featuring the local produce for which this area is justly famous: goat’s cheese, fresh fish, rustic pâtés, succulent cherries and, of course, regional wines.

Or, for prolonged pampering, indulge yourself with some seawater spa treatments and a massage or two. Try an upscale B&B such as La Maison Toussaint, complete with sauna, steam room, pool and spa treatments, or choose a spa hotel like La Grange in Niort, or Chauray cloisters where you can swim in a heated outdoor pool framed by Roman arches.

As well as the obvious natural attractions of Deux-Sèvres, there are several tourist sites and even theme parks to keep the whole family fully entertained. Top spot goes to France’s first-ever theme park: Futuroscope opened in 1987 and focuses on technology and futuristic entertainment. There’s a wide range of adrenaline-pumping rollercoasters, 3D features, magic and illusion experiences, sound-and light shows and water rides, and the kids will love dancing with robots and the astronaut-themed attractions. You might need to plan a two-day visit!

Next up is Monkey Valley – La Vallée des Singes – a unique 50-acre wildlife park 50 minutes south of Poitiers. Here, gorillas and chimps roam among the trees – some overhead and others on nearby islands – so you feel as though you are a guest in their natural environment. There’s plenty to see, so plan a whole day (and stash a picnic in the car if you’re not a fan of fast-food cafés) so you can make the most of the howler monkeys, marmosets, gibbons and a small petting farm, to boot! 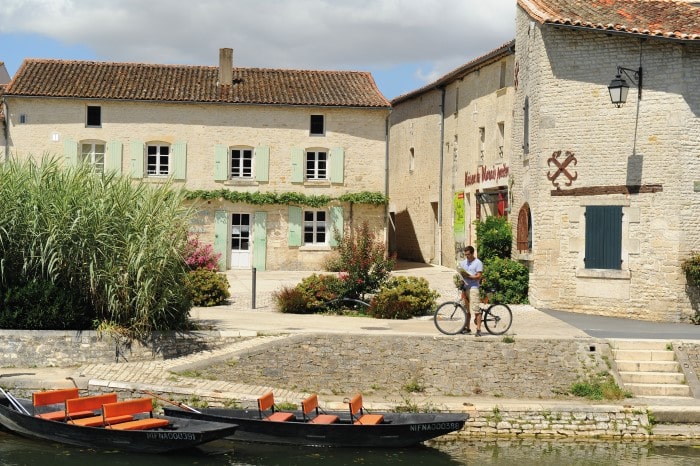 Given its central-west location, Deux-Sèvres has been a strategic target at various points in history, as is clear to see from the châteaux and fortresses you’ll see nestled amongst the greenery.

If you’re a fan of French architectural elegance, you’ll love the courtyard and proportions of Château d’Oiron, a structure that has evolved throughout its six centuries. Now it houses a contemporary art collection inspired by the cabinets of curiosities, as well as featuring works of art from the Renaissance period and the 17th century. And rather niftily, for those with mobility issues, specially designed tour robots allow you to wander through the rooms remotely – you can even chat to your pals via the robot from your control station on the ground floor as they wander through the rooms in real life. 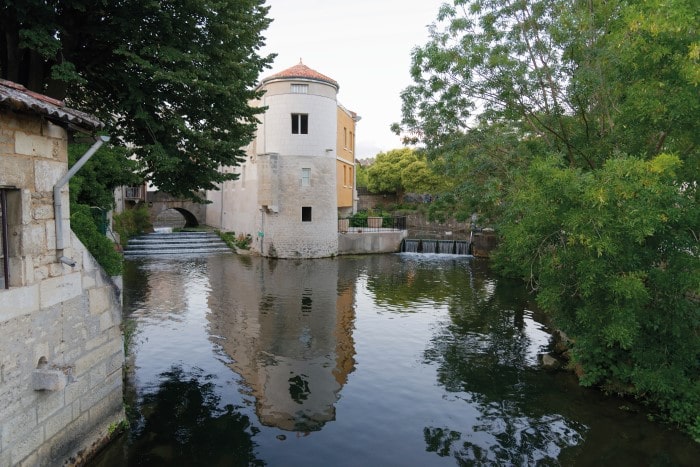 For fairytale turrets, try Château de Javarzay in Chef-Boutonne, which dates from 1515, and was one of the first Renaissance châteaux in Poitou. Its sweeping grounds include an arboretum, museum, historic reconstructions and exhibition spaces. For something a little different, try fishing in the château lake (from late February to mid-December).

However, it’s hard to beat the Château de Bressuire, whose magnificent Neo-Gothic manor is framed by the ruins of the original fortress and ramparts, standing guard over the landscape. This is one for the history lovers and those with the imagination to explore the remnants of a once-great castle and envisage the life of those who lived here in centuries past.