Dispatch from Bouzigues: The Art of Eating an Oyster 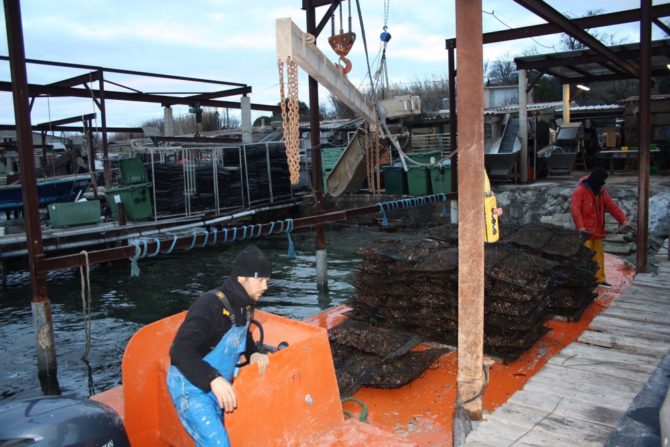 Oysters farming is a thriving part of the culture and economy of the Étang de Thau (the Thau Lagoon between Sète and Bouzigues) in the Languedoc Roussillon region, and the picturesque town of Bouzigues produces the most sought-after oysters in Europe. That is because, due to the higher density of salt in the lagoon, they are considered much tastier than their ocean-produced counterparts.

Even Bouzigues’ extensive oyster beds, however, are hard pressed to keep up with the worldwide demand. My theory is that the local population is consuming more than its fair share! It is not uncommon to see a glass of wine and 6 oysters consumed at the  local indoor market as early in the day as breakfast.

Oyster myths and misunderstandings abound and so I decided to educate myself by a trip to Bouzigues’ oyster museum (well worth the visit). Also I talked with local merchants and restaurant owners about oyster facts. What I learned is that not all oysters are created equal; there is quite a hierarchy. Yes, size does matter.

Oysters range in sizes from 1 to 6 or 7. Size one is the largest, yet the lowest in the taste “pecking order.” However, baked ‘au gratin‘ with parsley, garlic, butter and breadcrumbs, it emerges triumphant. For the smaller, bluer-blooded relations, a size 3 or 4 simply demands to be consumed raw. Cremating them in an oven would be an unfortunate ending.

More on that later. First, we need to know how to open – or shuck – the oyster.

Shucking an Oyster (and Leaving Your Fingers Intact)

Special chain mail gloves are available for those wary of injuring your hands; but save your money. Instead, purchase a bottle of Languedoc white Picpoul de Pinet wine. For oysters, it’s a marriage made in heaven. It insures your oysters’ last moments are happy ones (it will still be alive, after all). Just follow these directions and shucking will prove a painless experience:

How To Savour Your Oyster

Now that you have successfully shucked your oyster, how should you eat it? Heated debate centers around this question: swallowed whole – or chewed first? No oyster aficionado would forego the subtle flavours (nut or cucumber for example, depending on season), which are released when the oyster is gently chewed.

What accompaniments should you serve with the oyster? Nothing at all, say the experts – especially given the tastiness of Bouzigues oysters.

The North American tradition of adding horseradish or hot sauce is considered tantamount to manslaughter! However, French restaurants offer the options of simply adding a few drops of lemon or shallot vinegar, which will not detract from the natural flavours. (Lemon originally was used to check if the oyster was alive: if alive it ‘cringes’ when the juice is applied.)

A Few Other Pearls of Oyster Wisdom

Nancy McGee, founder of Absolutely Southern France, gives “insider hints” on regional delicacies, destinations and food etiquette. For a personal cheese etiquette experience, join Nancy on a Gourmet Walking Tour of Sète or Montpellier. Nancy is also a is a guest contributor to the Barefoot Blogger: bfblogger.com