Poulet de Bresse: The Only French Chicken with AOC Status 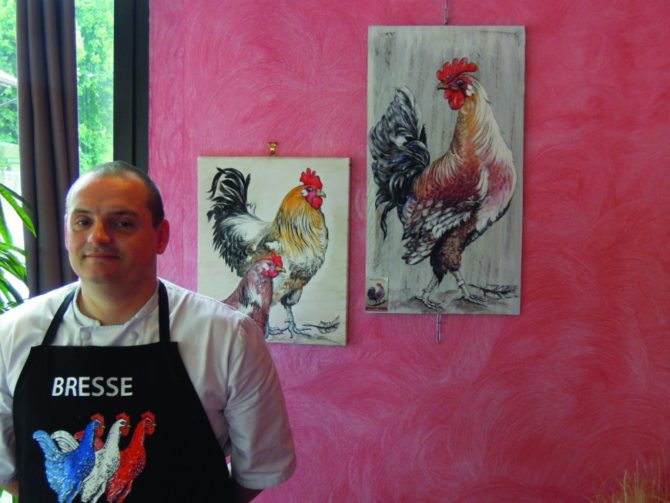 The strutting Bresse chickens which you occasionally glimpse from the roadside while driving through rural corners of Burgundy, Franche-Comté or the northern reaches of the Rhône-Alps could hardly be better suited to represent both the majesty of the French culinary arts and an enduring appreciation for all things terroir. They have all the right colours for a start: with their red crests, clean white feathers and blue, yes blue, feet, they are the animal embodiment of le tricolore.

But don’t be fooled by the feathers as these free-roaming poulets are more famous for their flavour. Ask any chef worth his sel de Guérande, from culinary sorcerer Heston Blumenthal to chief Bresse chicken flag-waver Georges Blanc, and they will agree that the only bird which belongs on the top table is a Bresse with AOC (Appellation d’Origine Contrôlée) status. 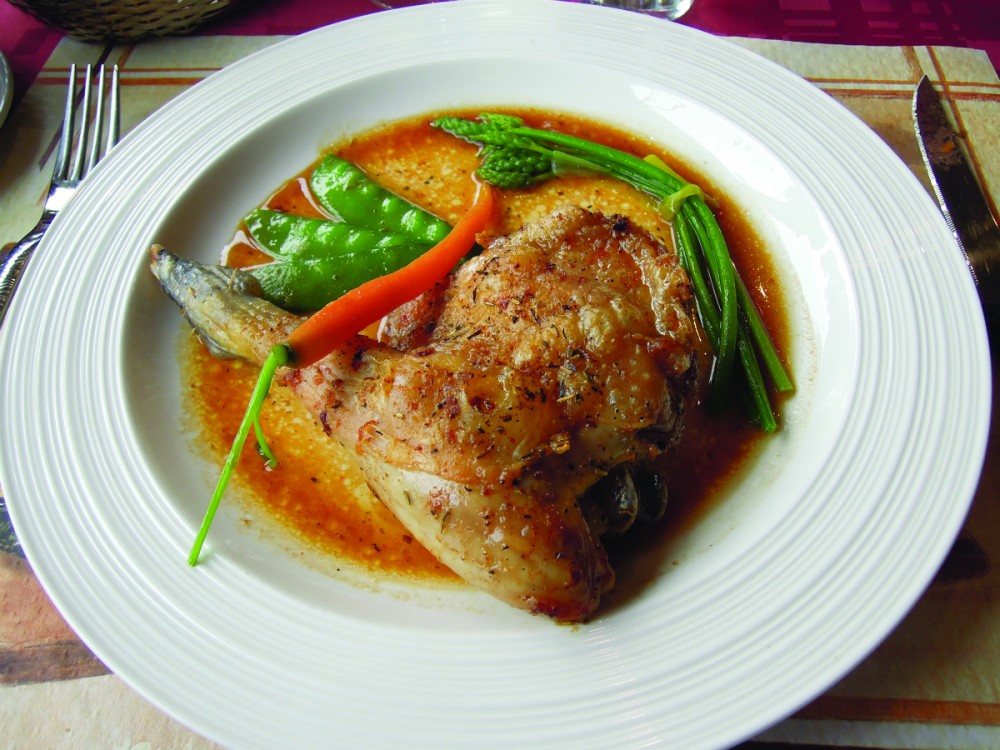 During a recent trip to a fabulously spruced-up Dijon (a prime destination for all gastronomes, with countless great restaurants to suit all budgets, as well as wine-based goodies), I headed out of town. After a quick visit to Louhans – an unassuming town where brightly coloured images of the majestic coqs adorn aprons, place mats, shop windows and menu boards all along France’s longest arcaded high street – I finally get to try the famous fowl for myself.

Lunch is booked at Le Saint Sauveur, Nathalie and Pascal Touvrey’s restaurant in Varennes St-Sauveur. Chef Pascal knows his chickens and roasts them to perfection, with just a little seasoning and herbs sprinkled on the skin, and serves them with reduced stock jus and seasonal vegetables. The skin is thin, crisp, golden and unfatty, while the meat is succulent, firm and packs a flavour punch way above its weight. Utterly delicious and rightfully at the top of the pecking order. Suffice to say, it’s the ultimate farm-to-fork experience. 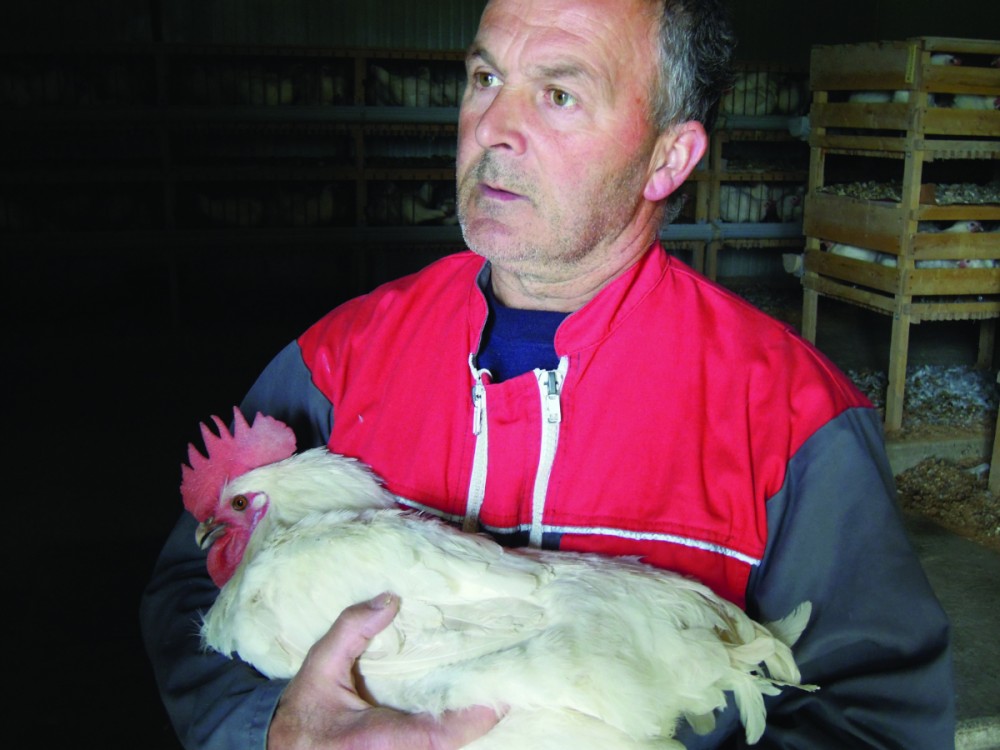 After lunch, I headed to the nearby farm which supplies Pascal. Charming farmer and superfan of all things Bresse, Alain Magne lives and breathes his clucking white charges, caring meticulously for them and speaking in reverential tones of their gastronomic valeur.

Through the drizzle he points to the vast spaces in which they enjoy foraging en plein air, for protein to boost their already decent diet, then leads me to the barn where he plays them rock music during their final days. This is the morally sound face of modern chicken farming (unless you dislike rock music), and perhaps it’s no coincidence that the Bresse chickens he raises taste so splendid.

My visit to the region is an education, thanks to my charming guide at the Bresse promotion board. In rural France, as far back as the 17th century, it was always the farmer’s wife who looked after the chickens, in addition to making cream and butter to sell at market. They would take their fine looking chickens along to sell and a spirit of competition soon evolved among the vendors. Actually, such was the value of these feathered friends that some farmers even paid their rent in chickens.

By the 19th century, when gastro legend Brillat-Savarin declared the poulet de Bresse to be ‘the queen of poultry and the poultry of kings’, this neighbourly rivalry had evolved and the first proper competition to declare France’s finest Bresse took place in Paris during 1865.

However, despite its citizens’ enshrinement of the Bresse chicken, it wasn’t until 1957 that the breed attained its illustrious AOC status. It remains the only poultry in France with such a designation and today the breed’s worth is judged at the annual Glorieuses de Bresse competitions, which take place just in time for Christmas and the New Year. 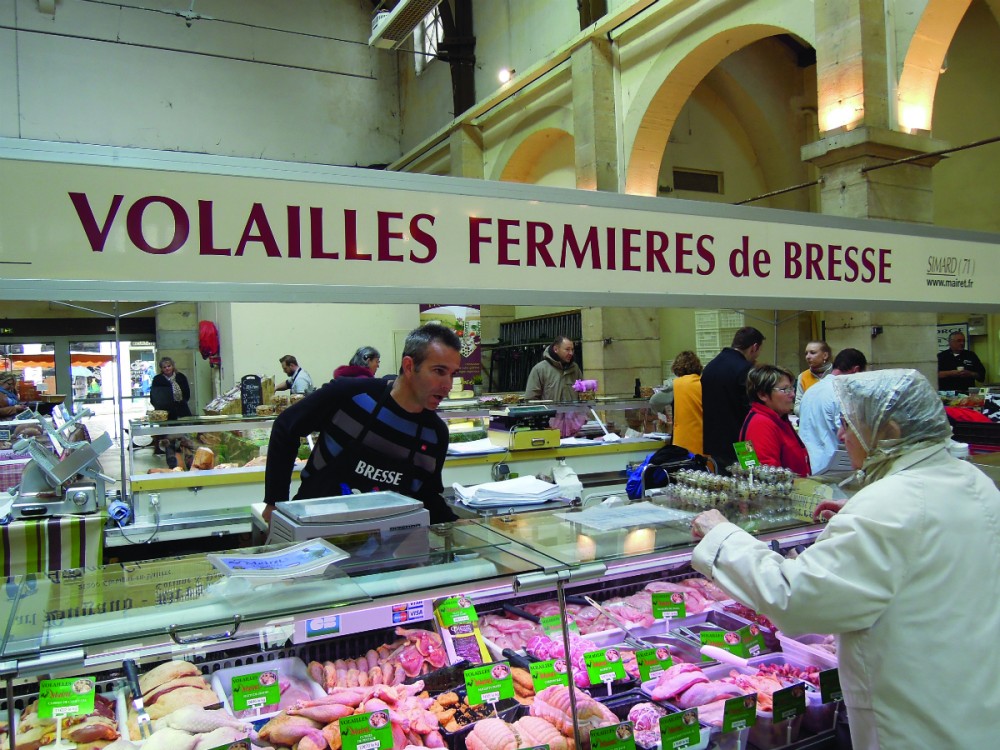 The breeding takes place in the Bresse region of the Rhône-Alpes, across three départements – the Ain, Saône-et-Loire and the Jura. Each
of these areas can boast bocage, a particular mixture of woodland and pastureland upon which the birds can roam.

It is required that each chicken must be guaranteed at least 10sqm (some get more) and the breeder has to feed them maize and wheat, plus milk from their 35th day. The birds must also be allowed to graze on grass, worms, seeds and insects to complement their diet.

Today, there are around 180 breeders, producing around a million chicks per year. In order to maintain standards, every Bresse chicken must pass through the selection centre at St-Etienne-du-Bois in Ain, to verify that all the designated characteristics are in place: a uniform fineness of the skeleton, hardiness, blue feet and white feathers.

After the selection process, the region’s half-dozen or so poulterers do their work, taking care not to damage the chickens’ fragile skin, and then their charges are ready for the butcher’s shop or the restaurant kitchen. Simple roasting, taking care to baste the skin regularly, or cooking in a cream sauce, are the preferred methods of preparing this sought-after icon of French cuisine for the table.

As for my verdict, I can vouch not only for the meat’s deliciousness, but also for the pride with which the produce is brought to market, as well as the super-friendly welcome of the Bresse ‘family’.