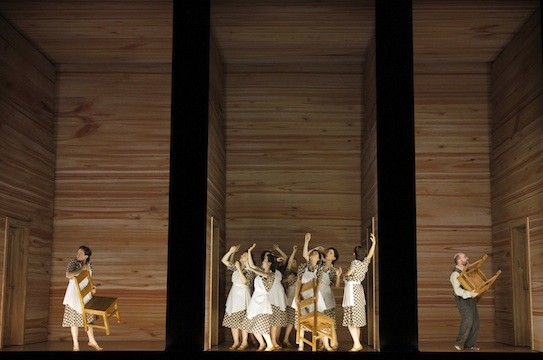 This article is the fifth and last in a series on the 2012 Aix festival. Read the previous articles in our Culture section.

Marc-Antoine Charpentier wrote the tragic opera David et Jonathas in 1688, for the Jesuit boys’ school Louis-le-Grand in Paris. Interspersed with scenes from a now-lost dramatic play in Latin entitled Saul, the joint work with a common Biblical theme was meant to be more edifying than entertaining—a lesson in the arts of declamation and music, and a morality tale about friendship, loyalty, honor and duty.

The story is that of King Saul, who takes the young shepherd David, conqueror of Goliath, into his palace as almost an adopted son; David and Saul’s son Jonathas become close friends, but Saul develops a paranoid fear that David will usurp his throne. Escaping from Saul’s ire, David takes refuge with the Philistines, and the boyhood friends are forced onto opposite sides of the ensuing civil war.

Director Andreas Homoki has updated the story to a vague early 2oth century, and despite his insistence to the contrary in the opera’s program, the setting would seem to be a kibbutz-like Israeli settlement in territory shared with Palestinian-like Philistines. Whatever the intention, the updating doesn’t work, and the production itself is painfully static. The set is a plain pinewood box, with sliding panels can divide it into sections. Costumes are monochrome gray and brown, with hats and caps for the Israelites and fezzes for the Philistines.

Saul is anything but regal—he’s an ordinary kibbutzim like the others, with receding hairline and rimless glasses, making his lyrical furor in losing his empire meaningless. David and Jonathas are dressed like the schoolboys who were the opera’s intended audience, in gray knickers and suspenders, and when Jonathas sings of being called to his duty, that would appear to mean homework rather than a great battle. And leaving all ambiguity aside, the relationship between the young David and the adolescent Jonathas is explicitly a homosexual love affair.

Charpentier’s music is marvelous, and there is no faulting Baroque music’s champion William Christie conducting Les Arts Florissants. Canadian tenor Pascal Charbonneau has nearly a countertenor range, and his David is impassioned and beautifully sung. As the younger Jonathas—a role originally intended for a boy soprano—Portuguese soprano Ana Quintans is also beyond reproach, but carrying off the trouser role of an adolescent boy in a homoerotic relationship is no easy task.