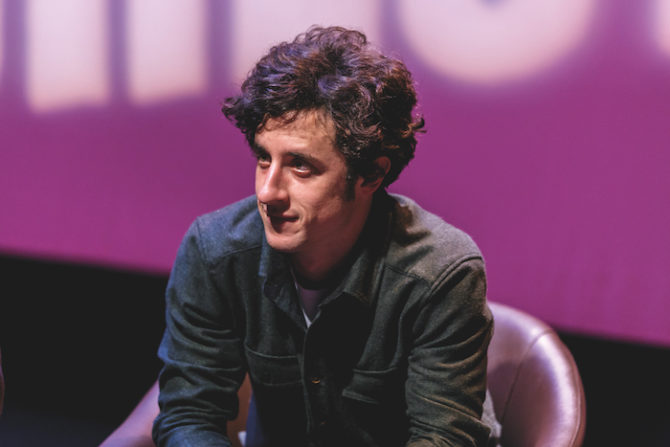 One of France’s most exciting young actors was nominated for an award at the 2021 Césars but what makes Bastien Ughetto tick?

The 46th César Awards took place at the Olympia in Paris on March 12. One of the nominees for the title of ‘Male Revelation 2021’ was a man who at 31, is already an actor-writer-director determined to explore the world of cinema in all its possibilities.

Bastien Ughetto came to the attention of the Académie des Arts et Techniques du Cinéma for his role in Albert Dupontel’s 2020 comedy Adieu les cons (Bye Bye Morons), which was topping the French box office before Covid forced cinemas to close their doors.

Encouraged by his great uncle to pursue a career in cinema, Ughetto, who spent his teenage years in Argentina, was torn between a career behind the camera or in front of it. As a young teen, he used the family’s camcorder to make short films for YouTube, and then at the age of 18, he honed his taste for performance with a role entertaining visitors at Disneyland Paris. Finally, he enrolled at EICAR, the International Film & Television School in Paris, eventually forming Les Parasites Collective with fellow alumni Guillaume Desjardins and Jeremy Bernard.

At 21, he landed his first role, in François Ozon’s 2011 movie Dans la maison (In the House), which, he later said, he thought would transform his life only to find that, 18 months later, he was working in a hotel, making breakfasts at 5am. He says it was a lesson worth learning: that the people who make it in the movie business are not just those with talent, but those who are passionate and refuse to give up.

Art with a Purpose

Les Parasites, who have more than 500,000 YouTube subscribers, are best known for L’Effondrement (The Collapse, 2019) an eight-episode anthology series on the theme of collapsology examining the progressive erosion of French society. Ughetto believes, he says, in making ‘useful art’ – “art has for me the responsibility of trying to raise awareness, whether intellectually, or at the level of social, ecological and political commitments”.

With a raft of TV movies and series under his belt as well as several more big-screen appearances, it was Ughetto’s role as Adrien in Adieu les cons which made the César judges take notice. A poignant comedy caper, it stars Virginie Efira as Suze Trappet, a seriously ill woman who decides to track down the child she was made to abandon when she was a teenager, taking with her on her quest a burnt-out middle-aged man and a blind man who is on his own bureaucratic mission. We won’t say any more but we suspect Ughetto won’t be serving breakfast any time soon.

Early career: Encouraged by his great uncle, he dabbled in movie-making as a teenager and then attended EICAR in Paris before making his first cinematic appearance in François Ozon’s 2011 comedy Dans la maison (In the House).

I know the face… As a member of Les Parasites, Ughetto has hundreds of thousands of YouTube followers, who can’t get enough of the highly-acclaimed L’Effondrement, a series of short stories which look at the collapse of society and how people behave in the aftermath.

Where will we see him next? 2020 was a busy old year for Ughetto – as well as playing Adrien in Adieu les cons, he had roles in Forte, directed by Katia Lewkowicz, Messe Basse, directed by Baptiste Drapeau and Saint Habib, directed by Benoît Mariage.

C’est pas vrai! Ughetto spent his teenage years growing up in Argentina, where he studied at the Lycée Franco-Argentin Jean Mermoz.

Previous Article Restaurant Reviews: Mosuke in Paris
Next Article Where to Stay and Eat in the Cévennes