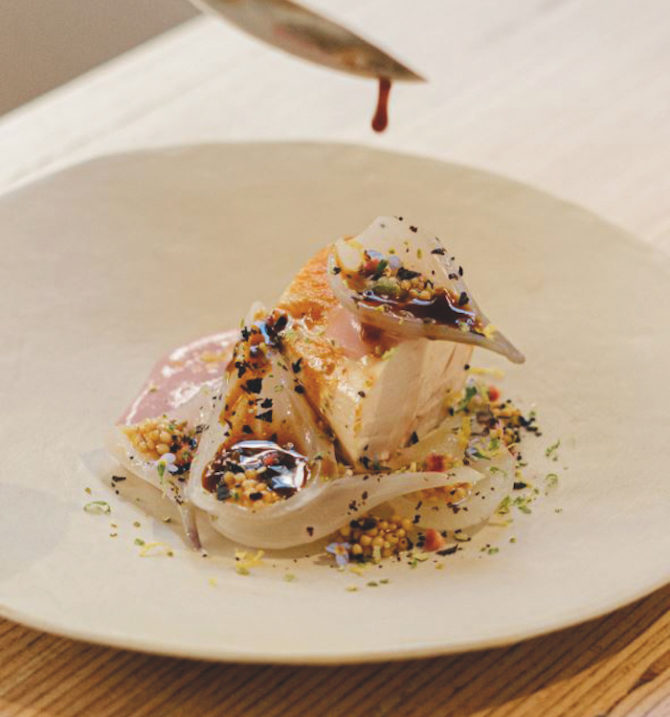 The name of this almost all-white, soothingly Zen restaurant in a two-storey building in a residential neighbourhood in Montparnasse teases the reasons that it’s one of the most interesting new tables to have opened in Paris for a long time. The compound word derives from the first name of chef Mory Sacko, 28, and one of his heroes, Yasuke, the first and only African samurai, an emancipated Mozambican slave who lived in 16th-century Kyoto.

“My cooking is a reflection of my identity as a Frenchman of African origins and my passion for Japan,” explains Sacko, who grew up in the suburbs of Paris as the child of immigrants from Mali. Sacko’s mother had also lived in the Ivory Coast and Senegal, so she served her family dishes like chicken yassa (with lemon and onions) and mafé (beef stew in peanut sauce). “I ate African at home and fast food when I went out with my friends. I didn’t have a grandmother who cooked boeuf bourguignon every Sunday,” he says with a grin. “French food was pretty much unknown to me until I went to hotel school and then got my first job working in the kitchen of the Royal Monceau hotel in Paris. So I’m a little irreverent with tradition, but at the same time I really respect it.”

It was after he became sous-chef to Thierry Marx at his Michelin two-star restaurant Sur Mesure at the Mandarin Oriental Hotel in Paris, though, that Sacko found his culinary north star – Japan. A passionate Japanophile, Marx introduced Sacko to Japanese techniques and produce. “It was a real revelation to me,” says Sacko, who has never visited Japan. “I fell in love with the aesthetics, techniques, flavours and reverence for produce of Japan.”

This trinity of influences – Africa, France and Japan – is reflected by the light, fresh, artfully plated and intriguingly original dishes Sacko serves at his restaurant, which opened last September. Eating here with a friend, the dining room repeatedly rippled with excited curiosity as each table was served its next course. For our part, we were consistently fascinated by Sacko’s suave and sophisticated cooking, including dishes like a starter of grilled mango with smoked pepper and basil, lobster in miso sauce with smoked pepper and lacto-fermented tomato, sole seasoned with togarashi shichimi (a Japanese seasoning) and lovage cooked inside a banana leaf and served with a side of attiéké, a couscous-like preparation of dried fermented cassava pulp from the Ivory Coast and a very refined version of chicken yassa. Desserts were brilliant, too, including chocolate ganache made with smoked salt and wasabi ice cream and marinated pineapple with bissap sorbet and candied shiso leaves.