Shopping in the Haut Marais 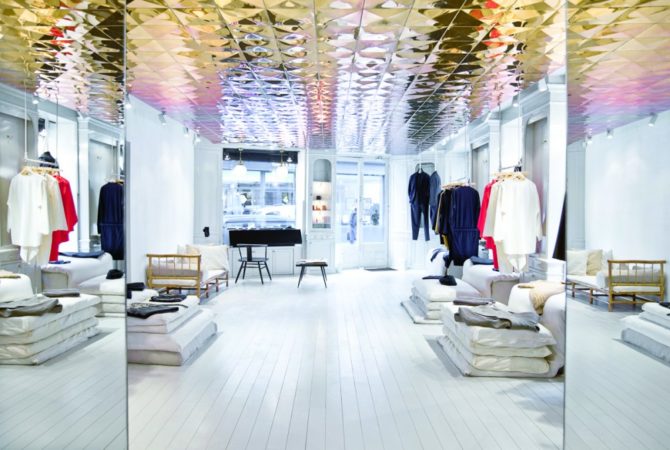 Paris’s Marais neighbourhood, spanning the 3rd and 4th arrondissements, has historically been home to the French aristocracy, who took residence at Place des Vosges, once known as Place Royale. In the 17th century, French nobility inhabited luxurious mansions called hôtels particuliers there. Following the revolution, the sovereign class moved away and the Marais became an industrial district housing small-scale manufacturers and a growing Jewish community. It is only in recent years that high fashion boutiques and art galleries took the place of button and zipper shops, and what was once a thriving manufacturing district reclaimed its status as a shopping destination.

As the Marais has become ever more chic, it has continued to expand northward. Now many of its trendiest addresses are located in the area, aptly named the Haut-Marais (North Marais), which runs from the Picasso Museum to the Place de la République. Several noteworthy boutiques line these cobbled streets, sharing this on-the-rise neighbourhood with such designers as Sonia Rykiel and Isabel Marant.

The North Marais has also become home to French celebrities, Jean Dujardin among them. Rue du Bretagne, the neighbourhood’s main artery, unites a mix of locals and tourists, who fill its terraces of bistros and cafés. The recent re-opening of the Carreau du Temple, a 6,500 square-metre covered market, has also redefined this once working-class neighbourhood. It is here that many new designers showcase their wares, hoping to attract the attention of the resident bourgeois-bohème.

One of the first designers to set up shop in the North Marais was Christophe Lemaire. Having gained his experience working with style icons Yves Saint Laurent and Christian Lacroix, he opened his boutique in 2006, where he displays men’s and women’s fashions. Lemaire designs “timeless yet precise garments for each one to mix according to the mood and moment to create a very personal uniform”.

This crème de la crème of shoe stores stands alone in the North Marais, opened in 2004 by fashion consultant and magazine stylist Valery Duboucheron. Living on Paris’s Right Bank but having to go shoe shopping on the Left Bank due to a lack of fashionable options, Duboucheron took matters into her own hands, and feet. This intimate, 13sqm boutique is at once casual and classy.

Duboucheron’s understated yet elegant shoe selection features designers Marc Jacobs, Avril Gau, Rupert Sanderson and Yves Saint Laurent, often with styles which cannot be found elsewhere, not even on the ‘Rive Gauche’. Perhaps this is why Kate Moss and Sienna Miller are listed among her clientele.

Who is Tom Greyhound? No one really knows the name behind this new multi-brand boutique, which opened in March 2014. What is certain, however, is that he’s a nonconformist. What was once a spacious 360sqm, two-floor gallery is now home to an international collection of men’s and women’s designers, the first retail branch of this Korean born store to open outside of Seoul.

With over 50 labels from the United Kingdom, Europe, Asia and India, this gallery-cum-boutique offers clothing as art, with only three to four pieces of each item. Two Korean brands are featured exclusively: Décke and System. Along the walls hangs art by fashion brand Each Other, which changes monthly, along with various in-store events. Here too can be found US fragrance brand OLO, and modern jewellery by Berlin-born René Talmon l’Armée.

Concept shops are on the rise in Paris, though none can compare with Merci. Opened in 2009 by Bernard and Marie-France Cohen who founded the childrenswear company Bonpoint, and housed in a former 19th-century textile factory, Merci features four floors of carefully curated designer and vintage fashion and housewares.

Due to its immense popularity, Merci has become a launching pad for emerging talent. Among the many lesser known designers hang coveted pieces by Stella McCartney, Isabelle Marant and Paul Smith. The sprawling floor of housewares, including designs by Philippe Starck, features vintage tables and chairs juxtaposed with modern tableware. A decorator’s paradise! Here too you can discover creative kitchen utensils and unique lighting fixtures on the lower level.

The used bookstore is an ideal spot for a fashionable coffee date, while the downstairs restaurant offers a market-fresh lunch selection overlooking a courtyard. The latest of Merci’s eateries is the Ciné Café, where you can dine al  fresco or watch a classic film projected onto the café’s wall. Merci constantly reinvents itself, with the in-store theme changing monthly. A new world is created within the store’s 1,500sqm of space, much like an interactive art exhibition.

Beyond the fashion and frivolity, the true purpose of Merci is one of philanthropy. From day one, proceeds have gone towards educational projects and development in Southwest Madagascar. Shopping with a purpose!

Opened in 2008, and once housed in two locations due to its ‘overnight’ success, this consignment shop (dépôt-vente) recently moved into a grander and more fitting space on Rue de Turenne. Named after the owner’s two daughters– budding fashionistas, no doubt – it features such top ready-to-wear brands as Chloé, Vanessa Bruno, Marc by Marc Jacobs, Paul Smith, Manoush, Zadig et Voltaire and Céline.

Shopping here feels much like entering the closet of your most fashionable friend and finding that ideal dress or pair of heels. The careful selection of clothing and accessories is certain to suit the most fashion-forward of clientele. Organised in a kaleidoscope of colours, this treasure trove is the perfect place to find that must-have accessory from seasons past. New additions, from shoes to sunglasses, are added weekly with the designer window display changing at the blink of an eye.

This eponymous label takes its roots from Osaka, Japan, where the designer was schooled in fashion. Following her studies, Miki Mialy arrived in Paris, where she immersed herself in the city of style and set in motion her unique fashion vision. In 1992 she launched her first collection, inspired by styles from the 1950s and 1960s.

Mialy brings great detail to the cut and quality of the fabrics she uses, which is evident in the asymmetrical cuts and luxurious materials. Wool and angora are her fabrics of choice for winter, and cotton and silk for summer, relying on a natural colour palate. To celebrate a decade of her label, Mialy opened her spacious, airy boutique in the North Marais, which is the ideal showroom for her creations. Mialy’s background, which mixes Western and Eastern influences, has certainly set her apart in the fashion world.

Through a shared passion for art, fashion and travel, the couple behind this French brand opened their first Paris boutique in 2005. Their inspiration came from numerous trips to New York, Tokyo and London. The result is evident in the name, a combination of French and globe-trotters.

With an exclusive selection of French, Scandinavian, Japanese and US products, this multi-brand store has gained a cosmopolitan reputation among its varied clientele. Some of their international labels include Filippa K, Acne, Engineered Garments and Our Legacy. Since 2010, FrenchTrotters is also a ready-to-wear brand for men and women, with many of their ‘casual chic’ collections being produced locally in Paris.

In the last year, owners Carole and Clarent opened a 200sqm flagship store on Rue Vieille du Temple, with ample space to display their fashionable wares as well as a selection of unique items for the home.

In Portuguese, Beija means “a kiss” and the name well suits the romantic visions of British designer Michelle Lindup. A long-time collector of vintage fabrics and garments, Lindup started sewing at the age of ten.

Following a long and successful career in both the British and French design industries, Lindup launched her first collection in Paris during 2008. Her feminine designs feature hand-stitched finishings, wool embroideries, Battenburg and antique lace. These artisanal elements, use of natural fabrics and attention to detail are what creates the brand Beija.

Lindup fell in love with the history and energy of the Marais neighbourhood, thus choosing it as the setting for her Paris boutique, which is a haven of vintage style with a modern twist.

Kasia Dietz is a handbag designer and freelance writer from New York who possesses a passion for art and travel. She lives in Paris’s North Marais and her designs have been featured in many international publications. Kasia’s wares are available from www.kasiadietz.com and she also has a blog about Paris: www.loveinthecityoflights.com