Named for a type of orchid native to l’Île de la Réunion, a French territory in the Indian Ocean and the birthplace of chef Kelly Rangama, this intimate, brightly lit restaurant offers a unique and decidedly sunny experience of two different tropical islands. First, La Réunion, but also Guadeloupe in the Caribbean, where Burgundian-born chef Jérôme Devreese, Kelly’s husband, has spent a lot of time.

Together, the pair bring some very impressive experience to their first restaurant on their own in Paris’s 17th arrondissement. After training at the celebrated École Ferrandi in Paris, Rangama worked for chef Michel Portos and at several other restaurants before being chosen for the popular gastronomic television show Top Chef in France, while Devreese, a trained pastry chef, worked at the Prince de Galles, La Réserve and Le Bristol. Now they’re delivering an intriguing and contemporary take on the flavours of these islands, often using produce that has been imported from them directly. 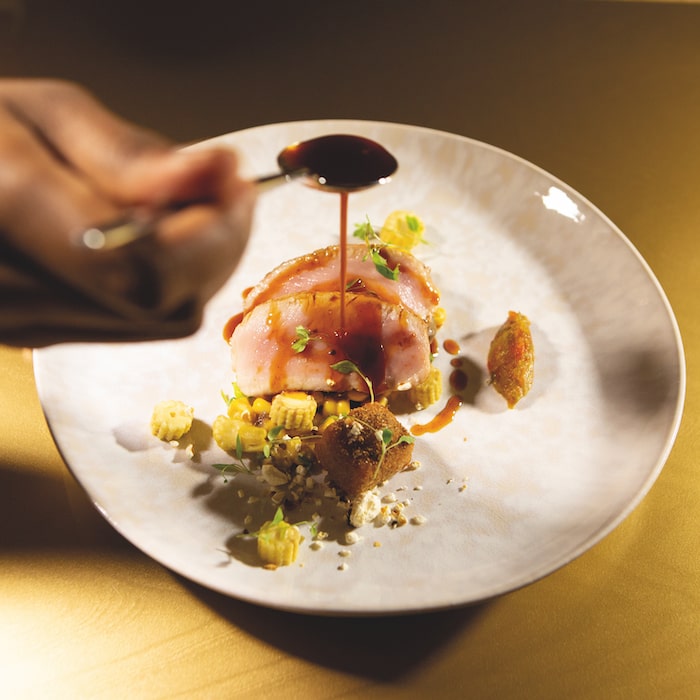 The restaurant blends the cuisines of La Réunion and Guadeloupe. Photo © Le Faham

The menu evolves regularly but starters like Les Sarcives (pork with mousseline de taro and a coriander condiment); hearts of Réunionnais palm salad with citrus and caviar; and wild shrimp with massale-seasoned celery and bisque are bright, fresh and vividly flavoured. They also reveal the multicultural personality of the cuisines of these two islands, where the cooking is a mixture of French, African and Indian – many indentured Indians were brought to work on plantations on these islands after the abolition of slavery – and, in Guadeloupe, Amerindian. Among the mains, the squid sautéed with tandoori spices and artichoke mousseline, and the légine (toothfish in English) fillet, which is imported from Réunion, with carrots and ginger, stewed tomatoes and crispy rice, are succulent standouts.

Finish up with Devreese’s airy sweet potato cake with sweet potato sorbet and cinnamon berry emulsion, and note that the wine list here is very solid, too. Le Faham is a charming and very original restaurant.

Want to be inspired by more French foodie experiences and enjoy classic French food, wine and recipes? Head to our sister website on Taste of France here.