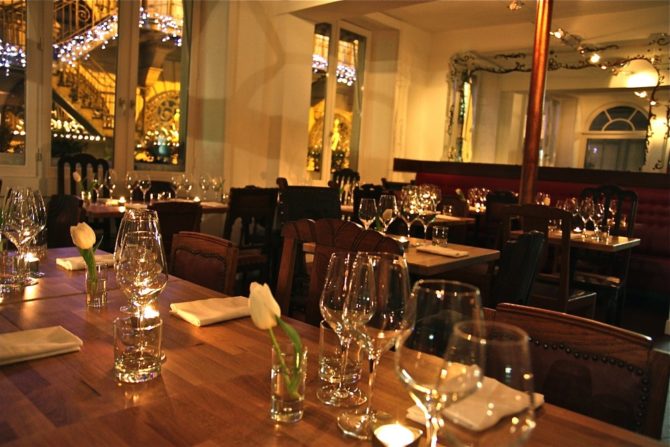 After working in Seattle with chef and restaurateur Tom Douglas, young American cook Braden Perkins and his partner Laura Adrian decided that their next big adventure would be Paris. They moved to the French capital four years ago and launched the hugely popular Hidden Kitchen, a regularly scheduled series of dinners hosted in their apartment. Now they have switched to Verjus, a wonderful restaurant and wine bar in a two-story space on the edge of the Palais Royal. They decided to close Hidden Kitchen and opt for a traditional restaurant because he missed “cooking with a team”, says Perkins, adding that the challenge of a Paris restaurant was “daunting but irresistible”.

The first course of roasted young leeks was served with a quail’s egg, Israeli couscous, oven-dried radicchio leaves and a scattering of ash I’d guess was made from the trimmed green of the leeks. Next, a succulent chunk of baked, freshly smoked salmon was accompanied by flying-fish eggs and tofu flan with salad leaves and fennel bulb shavings. The main course, a perfectly roasted chunk of pork belly with carrots cooked in carrot juice, was garnished with a tangle of escarole dressed with crumbled salted ricotta, offering a sophisticated spectrum of tastes and textures typical of Perkins’s cooking. The cheese sampler from Hisada, the cheese salon next door run by Japanese maître fromagère Sanae Hisada, was excellent too. The only missed beat was dessert, chocolate ganache with beet sorbet, citrus coulis and a dose of fennel—more agitated than interesting. But overall, Perkins, New Orleans-born and Boston-bred, is set to become one of the most interesting young chefs in Paris right now, no mean feat for an American.

Prices are approximate, per person without wine.