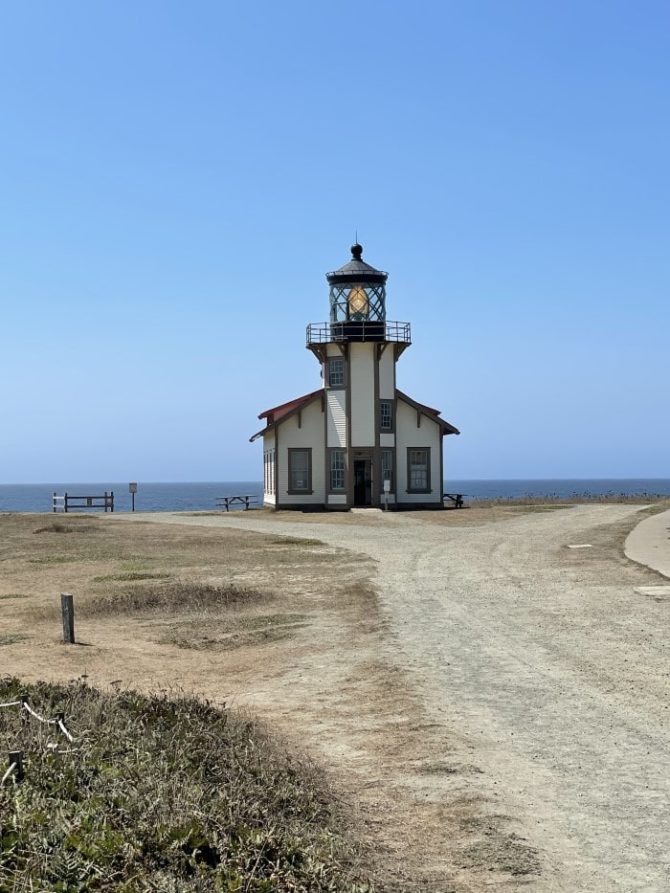 Lighthouses have been used to guide ships since 1300 B.C., but it took Frenchman Augustin-Jean Fresnel (1788 – 1827) to create the breakthrough technology that brought navigation out of ancient history and saved countless lives. At its height, the Fresnel lens was used in the thousands of lighthouses around the world and became indispensable for ship navigation and guidance by vastly improving the visibility of the lighthouse beam to indicate specific ports and danger zones of rocky shores.

Naval navigation technology is now via radar, gyrocompass and GPS, but Fresnel’s lens is still used in many historic lighthouses worldwide and his innovative technology is found in a variety of sophisticated products. There are about 75 lighthouses using Fresnel lenses in the U.S. – four in the San Francisco Bay Area – plus several in France including the Tour de Cordouan at the mouth of the Gironde river which this year became a UNESCO World Heritage Site. 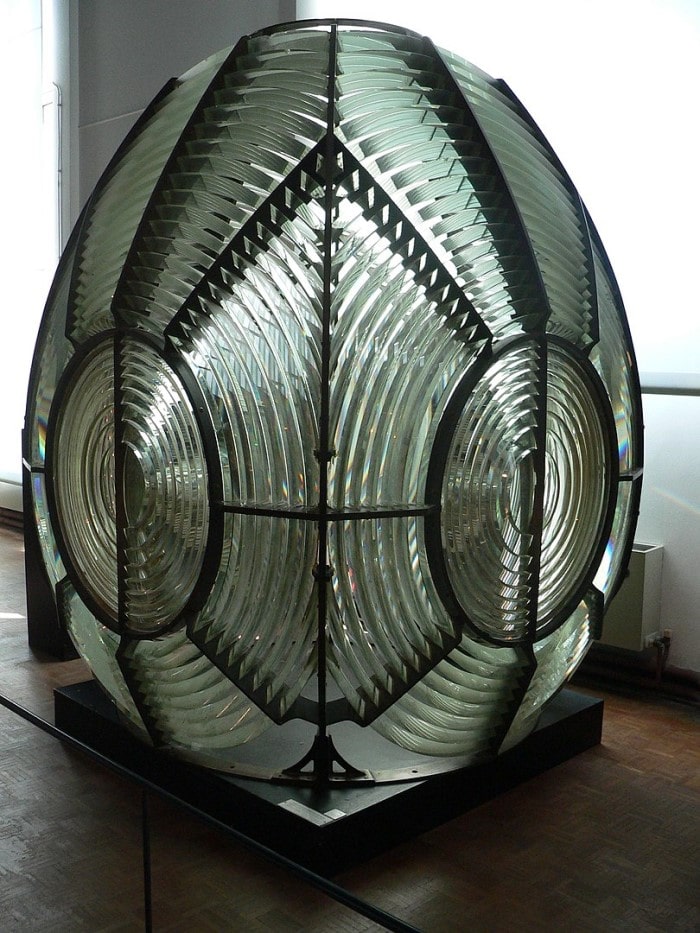 The earliest known lighthouses were no more than large wood fires burning on stone platforms like the lighthouse the Trojans built at Sigeum, Greece, at the mouth of what is now the Karamenderes River on the Aegean Sea. On a clear night if sailing close to the shore it was probably a little helpful, but never during stormy or foggy weather which is when a lighthouse directing a ship away from danger and toward a safe port is key.

The first French lighthouse was built by Caligula at Boulogne-sur-Mer on the cliffs above the port of the Liane River, possibly in preparation for an invasion by Britain. Oui, it used wood fire as the light source. The Tour de Cordouan, completed in 1611, is France’s oldest working lighthouse and the light source at that time was flaming oak chips in a metal container. By the mid-18th century, nothing much had changed. Coal and then whale oil-burning lamps replaced the wood fires but still only about three percent of the light output was visible to a ship at sea.

During the beginning of the 19th century, light began to be measured and shiny metal parabolic or u-shaped reflectors and large, thick glass lenses began to be used. Stationed behind the oil lamp, the reflector captured some of the light that would have been lost and reflected it out to sea through the lens. While an improvement, only 40 percent of the light was captured and the rest radiated out in all directions. It was still not intense light and worked poorly as an aid to navigation. Plus, the huge lenses were at the limits of fabrication technology while cost, transportation and installation were often prohibitive.

It took Napoleon Bonaparte to push for a solution. In 1811, the Commission des Phares (Commission of Lighthouses) was established and placed under the authority of the Corps of Bridges and Roads, which was Fresnel’s employer in 1819. Young Fresnel (pronounced Fre-nel) caught the attention of François Arago due to Fresnel’s scientific paper on diffraction and was recommended to review possible improvements in lighthouse illumination. 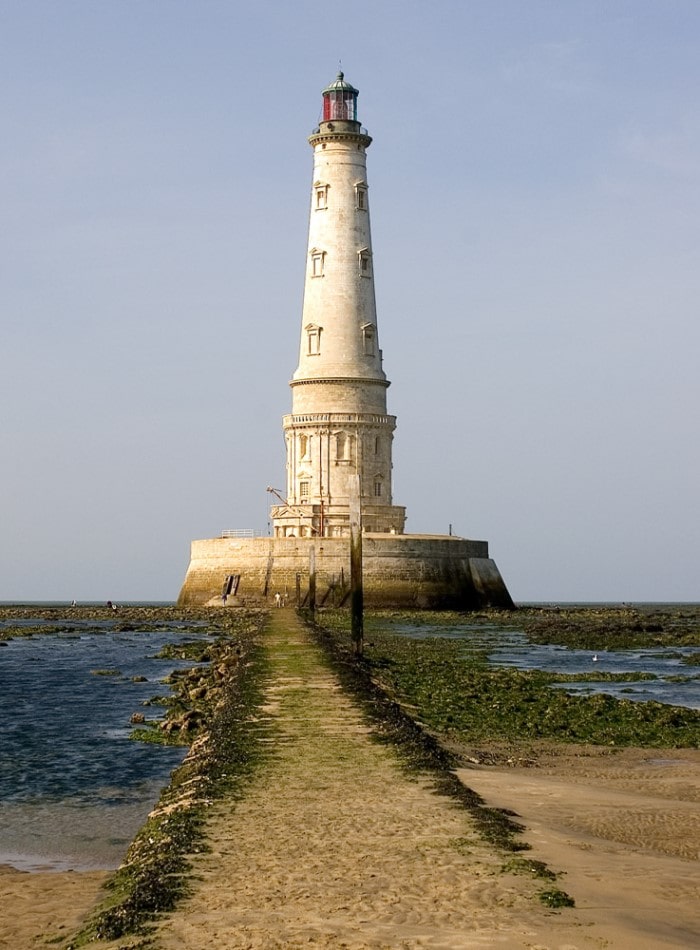 His strategy was to develop a more efficient method of using the lamp light that was already being used instead of a better light source. Fresnel designed a dioptric or refractive lens using a bull’s eye lens surrounded by an array of small lens and prisms. These were arranged in a stair-step configuration that bent, folded and focussed the light out to sea. The result: the Fresnel lens used about 80 percent of the light available from the lamp so light could shine farther and be seen through dense layers of fog, a massive improvement over the reflective lens.

Fresnel was a physicist, engineer and mathematician and used those skills to study the nature of light. His breakthrough was that light had a wave nature that could be harnessed with the right combination of lenses and prisms. He created a large lens of concentric rings consisting of carefully shaped prisms. Each ring bent the light it captured and, adhering to wave theory, the result was a large parallel beam of light. Another result was that the lens was far thinner and lighter than the thick, bulky standard lenses so it was easy to manufacture and instal.

By 1823, the first Fresnel lens was approved by the lighthouse commission and installed on July 23, 1823, in the Cordouan lighthouse. Fresnel developed a series of lenses and that could be disassembled and shipped in sections and configured into limitless numbers of light characteristics, or patterns and flashes of light divided by periods of darkness. This allowed each lighthouse to have a different characteristic that could be recognised by ship navigators thus making location recognition easier. Lighthouses became more useful, and the number of shipwrecks and sailor deaths diminished. 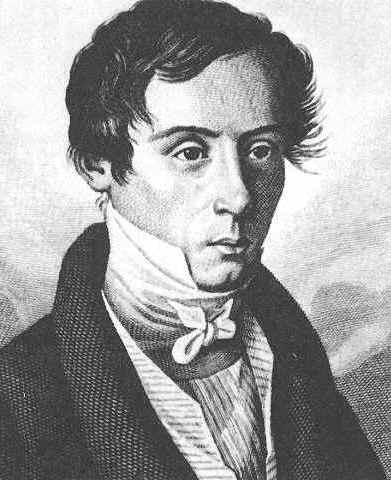 Unfortunately, Fresnel did not live to see the success of his lens. He died at age 39 from tuberculosis and is buried at Père Lachaise Cemetery in Paris. Every French lighthouse that used a Fresnel lens was given a bust of Fresnel and his name is one of the 72 names embossed on the Eiffel Tower (on the south-east side, fourth from the left.)

Electricity arrived and the Fresnel lens light became even stronger. With the advent of satellite-based radio navigation, or GPS, and other modern navigational tools, the lens became obsolete. But Fresnel lenses are still being used today in a variety of working lighthouses throughout the world. The San Francisco Bay Area has four operational lighthouses using classic Fresnel lenses. In Sausalito, the Point Bonita Lighthouse identifies the Marin Headlands. Point Pinos Lighthouse is in Pacific Grove and overlooks the bay. Yerba Buena Lighthouse is on the tip of Yerba Buena Island at a Naval Training Station in the bay. Farther north along the coast of Mendocino is Point Cabrillo Lighthouse. It uses a first order Fresnel lens that was made by the Henry-Lepaute optical company in France. 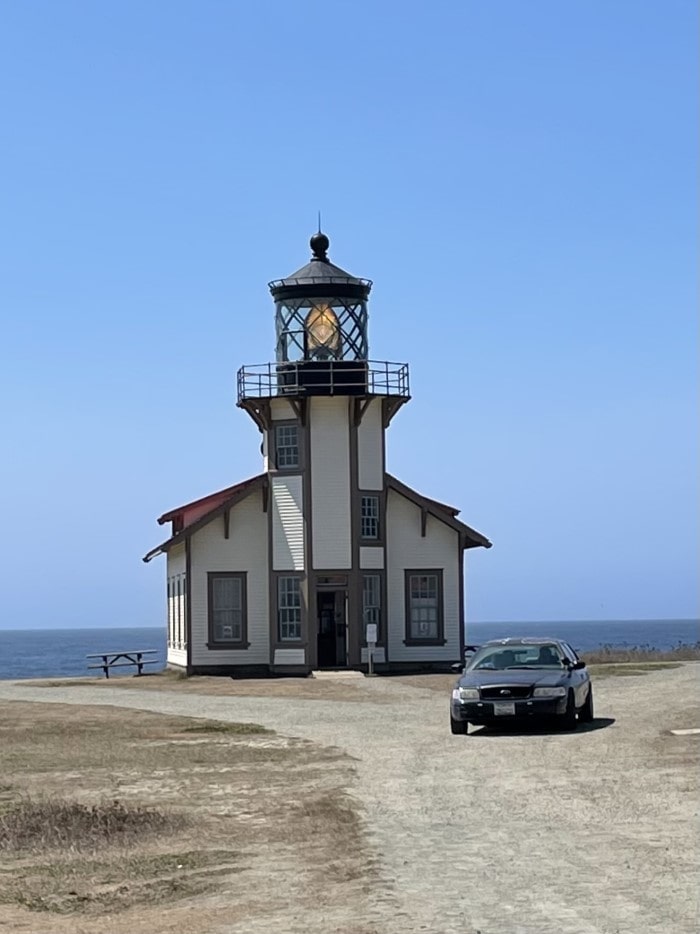 Fresnel’s legacy lives on. His technology behind wave theory and reflectivity are used in rendering computer graphics images with complex reflective surfaces such as water. Optical microscopy, IC lithography and some radar and MRI imaging also use his diffraction analysis. Truck and other large vehicle side mirrors use self-adhesive Fresnel lenses to help eliminate blind spots. They are used in solar panels as concentrators for solar energy striking photovoltaic arrays. Highly engineered versions are used in infrared detection systems such as security alarms, bar-code scanners, infra-red windows and plastic lens for magnification or lighting. Projection cameras and lighting instruments for photography and theatre sets use Fresnel lenses to increase and project light. And so much more.

Although Fresnel focused on a specific problem of increasing the visibility of light in lighthouses which saved the lives of sailors, the power of his technology continues to illuminate many electro-optical applications that affect numerous parts of our lives. Just look for them.