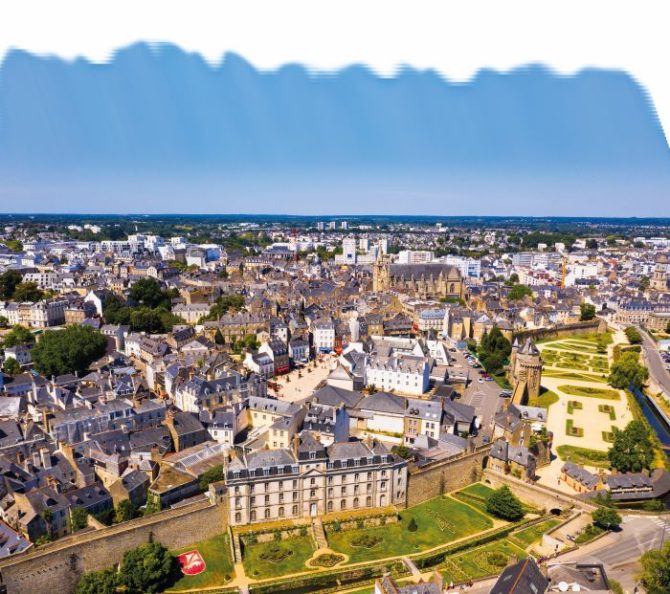 If you want a city in Brittany that sums up the spirit and beauty of this region, Vannes is a hot favourite. It offers the rich cultural heritage associated with northwest France, a chic harbour that brings the sea right into the city centre, a vibrant student population, plus a sense of historic elegance. Once visited, Vannes is never forgotten.

The city is named after the Veneti, a Celtic tribe who traded regularly with Britain and chose Vannes for its location at the mouth of two rivers and the easy access from here to the open seas. Although the Veneti were defeated by the Romans in 56BC, Vannes itself continued to flourish, largely thanks to its harbour. 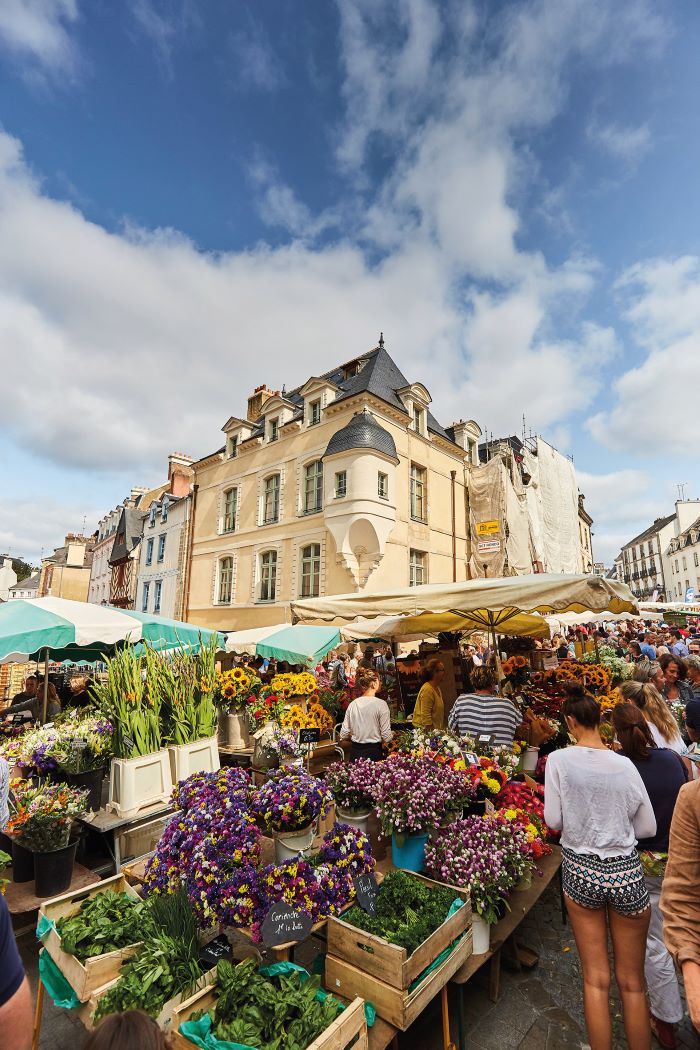 Market in Vannes © Golfe18- A Lamoureux

It seems that Vannes earned its status as a cathedral city as early as the 5th century, with several additional buildings during the 7th and 8th centuries. A quick glance at any images of Vannes will tell you, however, that its heyday came in the Middle Ages, as the town prospered and wooden buildings began to line the cobbled streets. At that time, timber was the easiest material to source and to transport, brought from the vast forests on the outskirts of the city.

The streets of Vannes are tightly packed with medieval timbered buildings but, unlike their English counterparts, they are gaily painted in blues, greens, ochres and reds. The result is a colourful crowd of very individual personalities that make up the character of Vannes and are instantly recognisable: Place Henri IV, rue Saint-Salomon, and rue des Chanoines have some wonderful examples. 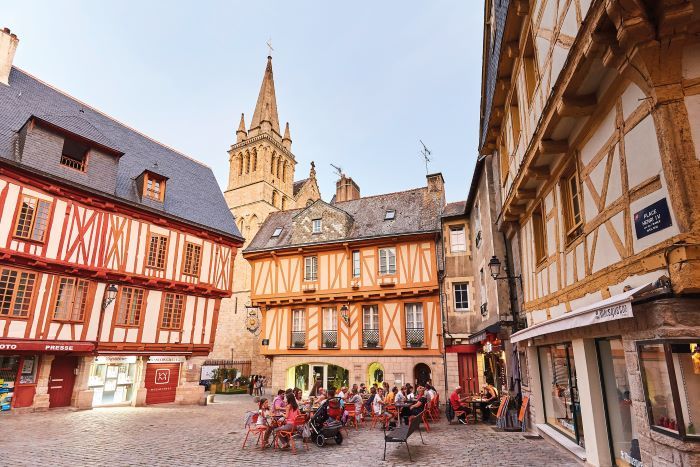 Look upwards as you explore and you’ll notice that many of these structures seem to grow bigger as they rise – but it’s no optical illusion. This is known as ‘corbelling’, with upper floors extending out over the street, creating sheltered walkways in front of the shops that would have occupied the ground-floor space. These ancient buildings almost seem to have leant further forward with each passing decade, like curious onlookers falling over themselves to peer at the visitors strolling by.

And if you feel that you’re being observed, it could be thanks to the various sculpted figures that gaze out from the façades. One of the most famous landmarks in the centre is known as ‘Vannes et sa femme’ (Vannes and his wife). Adorning a 16th-century timbered building at the junction of la rue du Bienheureux-Pierre-René Rogue and la rue Noé, this cheerful stone sculpture probably served as a shop sign for the merchant that once stood on this corner many centuries ago. As you continue to explore, following the quirky cobbled streets and alleyways, you might be suddenly surprised by the vast, 15th-century cathedral that is modestly tucked between other buildings.

The Cathédral Saint-Pierre is a unique blend of architectural styles, from the neo-Gothic façade to the 15th-century nave, 16th-century chapel and Renaissance-style rotunda. 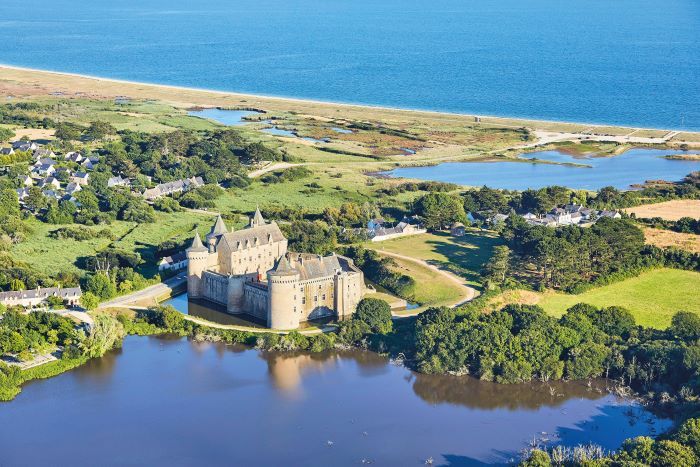 Presqu’île de Rhuys is one of many beautiful islands just off the coast © A.Lamoureux – Golfe du Morbihan Vannes tourisme

Back in the 1300s, Vannes was one of Brittany’s most important towns, and Duc Jean IV (1365-1399) decided to extend the impressive ramparts to enclose nearly 25 acres within the city walls, as well as building the Château de l’Hermine to house the dukes of Brittany, until 1458 when they transferred to Nantes. Vannes’ original castle eventually fell into disrepair; in 1697 Louis XIV donated the ruins to the town, and its stones were repurposed to repair other structures in the city and build the harbour quays. In 1798 the remains were demolished by an entrepreneur, Julien Lagorce, who built a hotel-restaurant on the site. Even though today’s structure is the Lagorce Hotel, locals still call it the Château de l’Hermine. To get a feel for the grandeur of the original château, visit the Tour du Connétable, which dates from the early 1400s and remains a beautiful piece of architecture. This tower once housed the ‘connétable’ – the armies of the Breton dukes – and even became a prison during the French Revolution. Despite its combative history, it offers amazing, unobstructed views across the city rooftops and now houses a fascinating roster of cultural exhibitions.

In sharp contrast to the medieval architecture, Vannes’ Town Hall (the Hôtel de Ville) is a glorious neo-Renaissance example of symmetry, with columns, marble staircase and a vast reception area. Dating from the 1880s it epitomises French architectural elegance and stands as an imposing symbol of municipal power.

On your first visit to this beautiful city, there’s a good chance that you’ll miss the château ramparts and impressive gardens that line the side of the city leading down to the harbour. Frequently used as a venue for events in summer, these gardens are free to explore and provide a generous area to relax, enjoy the shade or simply walk through towards the harbour. As you pass from the gardens to the port, look for the Garenne wash-house where locals used to wash their clothes in the River Marle. It dates from 1817 but looks ancient and is a beautifully photogenic spot. Ask the tourist office for the route from Porte Saint-Vincent to Porte Saint-Jean, and enjoy a leisurely heritage-lined stroll of under 1km that will take less than an hour but provide countless photo opportunities along the way. 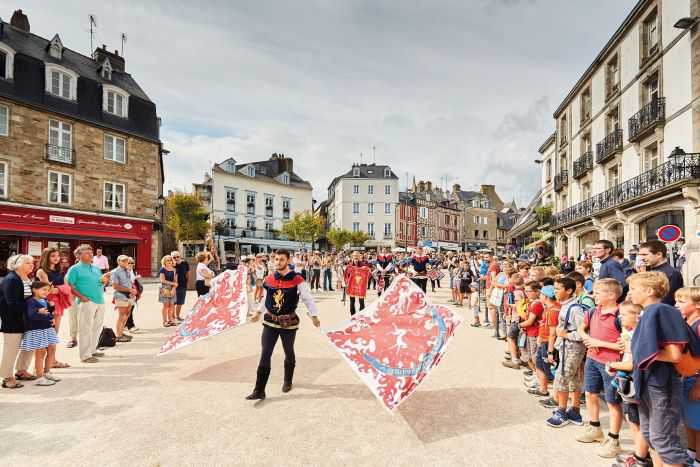 Within the heart of Vannes, you’ll find an entertaining variety of shops, not only the national chains you would expect but also several independent boutiques, frequently tucked down side-streets and winding alleyways, so it’s worth spending time getting lost.

This is a creative city, with the CréalOuest craft market on summer Sundays and Les Nocturnes des Artisans every Friday evening in July and August, when craft stalls line the harbour.

There are also two museums in Vannes: Château Gaillard is a mansion from the 15th century and now houses the museum of archaeology, but the most famous is La Cohue, dating from the 13th century. In medieval France, ‘cohue’ was the name for a marketplace, and, over the centuries, this building has been used as a market, the Duke’s courtrooms, a court of justice and even the Breton Parliament from 1675 to 1689. These days, it is the Musée des Beaux-Arts, a generous, stone-built exhibition space with ancient arches and a fabulous atmosphere. 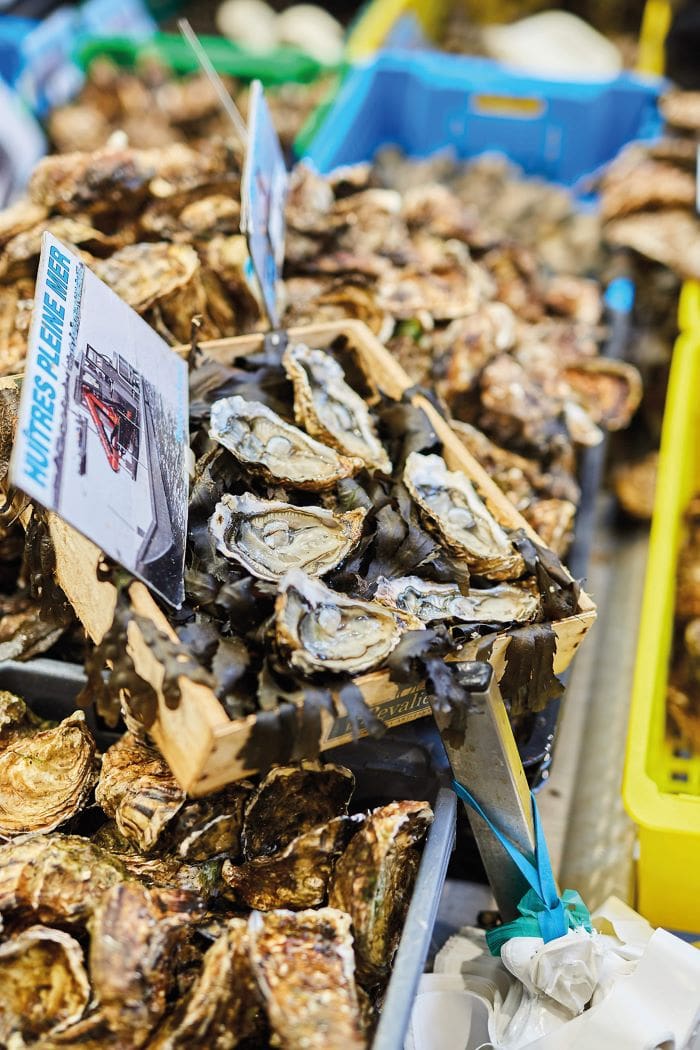 A CITY FOR SEAFARERS

You can’t separate Vannes from the ever-present sea, the source of its prosperity in the Middle Ages, and a top attraction for tourists even today. The Port de plaisance is the perfect place to people-watch, particularly from the curved line of pavement cafés which act as ringside seats as well as offering a hungry traveller everything from chic French cuisine to cheap and cheerful student fare and ice-cream cones. Settle down, watch the bobbing boats, sip an apéritif and if you have the energy, follow the quayside 3.6km to discover Île de Conleau (or there are shuttle buses if you prefer not to walk!). This ‘almost-island’ is connected to the mainland by a walkway but certainly keeps an island feel, with its own little beach, shady trees and lido-style saltwater pool. For a taste of the Atlantic, food-lovers are sure to appreciate the local seafood: oysters, mussels, fresh fish, langoustines, crab and lobster are widely available, although you might need to book in advance for the full seafood platter. Try the Restaurant de Roscanvec, Restaurant L’Eden, or the charming Chez la Mère 6 Sous and bring the sea to your plate!

Of course, you cannot describe Vannes without mentioning the stunning archipelago of surrounding islands, the Archipel des Glénan. In summer, the turquoise waters dotted with tiny islands seem like a tropical paradise, where you can go scuba-diving, kayaking, paddle-boarding or even take a cruise on a boat with a transparent bottom. Pack a picnic, take a boat trip and stop off on Saint-Nicolas for long beaches of fine sand, crystal-clear water and pure relaxation. 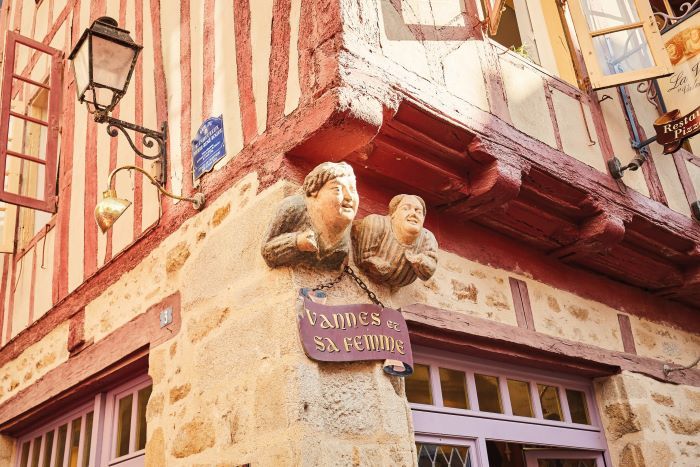 Short on time? Check out our selection of the very best Vannes has to offer.. 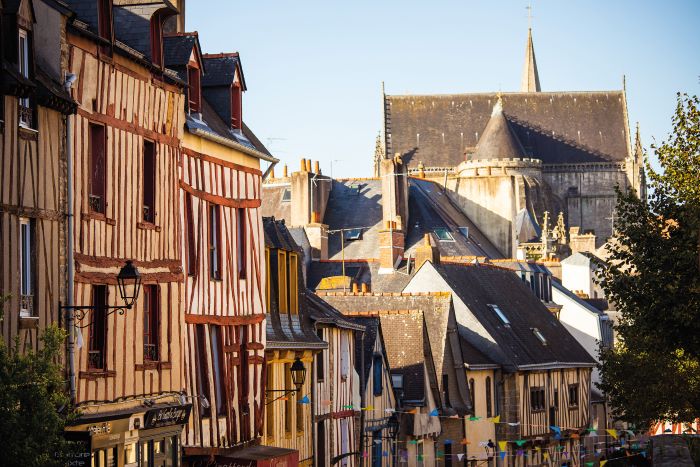 SOAK IN THE HISTORY
Whether you follow a route suggested by the tourist office or simply follow your nose, give yourself time to explore the different architectural periods of this city: the medieval timbers, the decorative stone sculptures, the meandering cobbled alleyways and the large-scale, neo-Renaissance grandeur of the city’s later buildings. 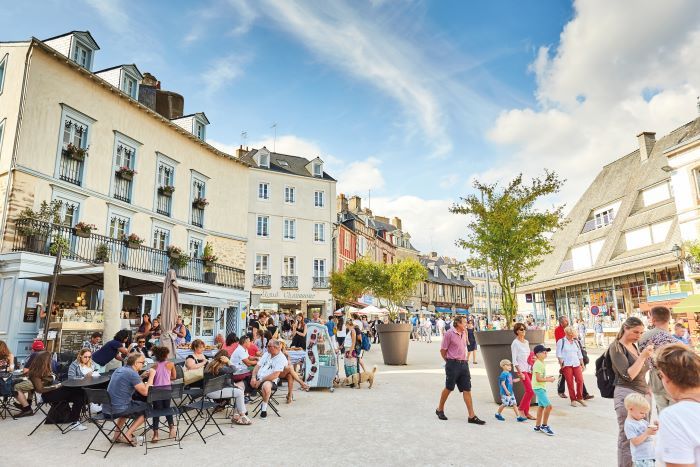 PEOPLE-WATCH AT THE PORT
This is an understated pleasure, lingering in beautiful surroundings, watching the world go by and enjoying the French tradition of ‘un verre sur la terrasse’… in fact, it’s almost a compulsory activity in Vannes, so it would be rude not to. 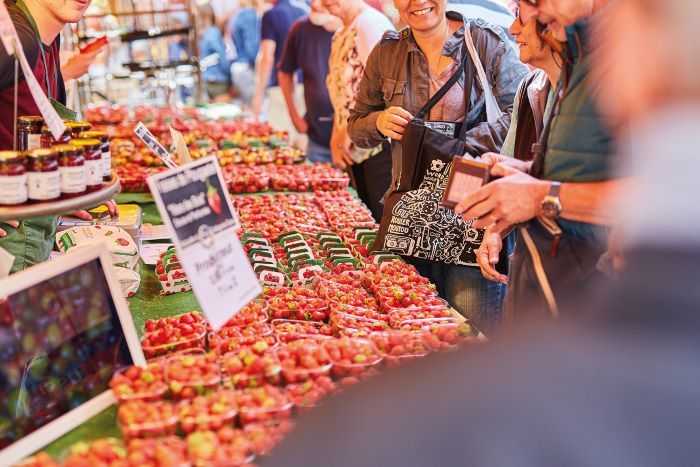 MARKETS AND FRESH PRODUCE
For the most authentic open-air experience, aim for Wednesday or Saturday morning and browse the bright stalls of fruit, vegetables, fish, flowers and freshly-baked bread. On other mornings, head to Les Halles des Lices covered market (place des Lices) and the fish market on Place de la Poissonnerie, and create your own menu! 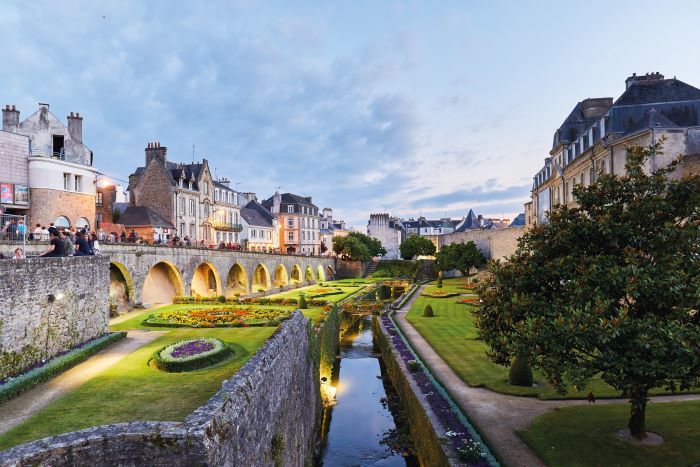 LIVE MUSIC IN THE GARDENS
Even if you’re not here during the summer Jazz Festival, you’re sure to hear live music in Vannes, especially in the Jardins des Remparts. 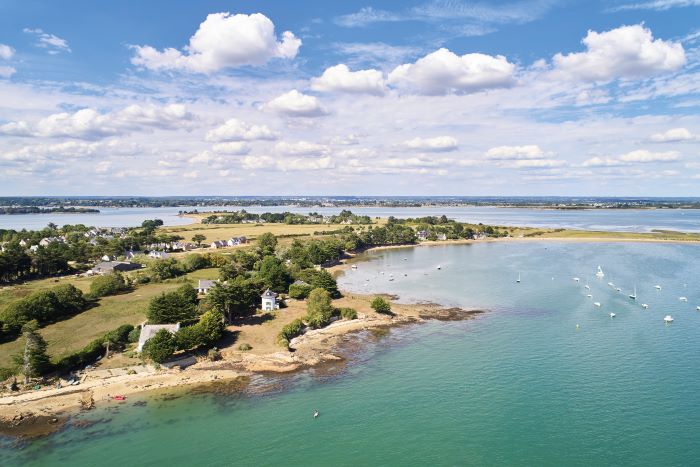 ENJOY ISLAND LIFE
Whether you stroll down to Île de Conleau or take a boat trip for the full experience of the Glénan Archipelago, you should definitely see the islands while you’re in Vannes. Their Caribbean-style spaciousness provides a breath-taking counterpoint to the cosy and historic city centre.