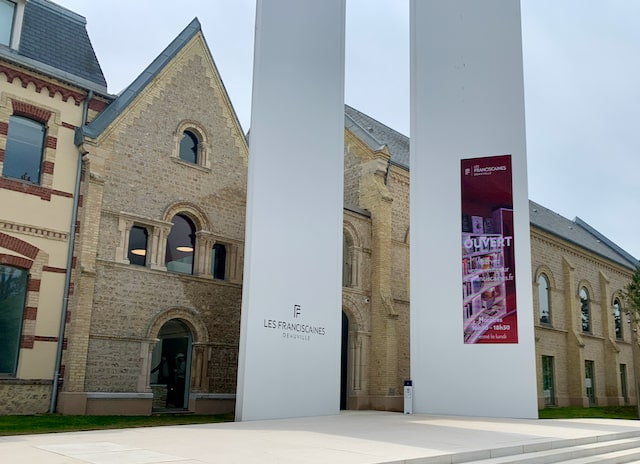 Deauville, Normandy, considered by many Paris’s 21st district, is famous for its beaches, horse races, and cinema festival, but now, thanks to newcomer Les Franciscaines, the seaside resort can also offer some art to its already appealing offer.

Housed in a former nunnery, Les Franciscaines is a cultural centre comprising the André Hambourg Museum, a space for temporary exhibition, an auditorium, a state-of-the-art media library and a café. 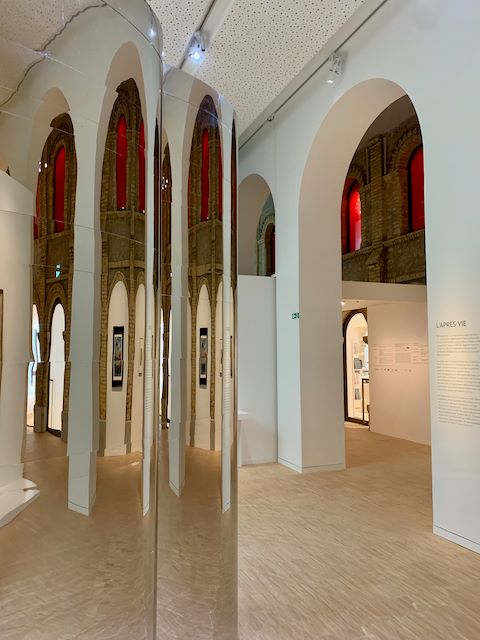 It began in 1875, when sisters Adèle and Joséphine Mérigault settled in Trouville with their father, a customs officer. Upon his death, the two decided to dedicate their lives to charity, and started looking for a plot of land to build a hospital for sailors. Trouville was already densely populated but nearby Deauville, situated just on the other side of the Touques river, afforded vast expanses of flat property still up for grabs. 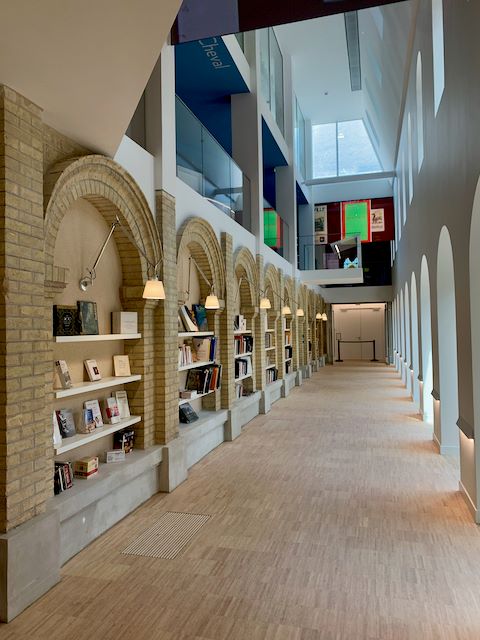 Upon completion of the first building, the sisters tweaked their project: they would welcome sailors’ orphans instead. The orphanage would be managed by Franciscan nuns, and in 1881 the Lisieux and Bayeux bishop founded the Order of the Franciscans of Notre-Dame de la Pitié de Deauville.

As time went by, the orphanage grew in size and new buildings were added to the initial one. During both World Wars, it was transformed into a hospital for wounded soldiers, and finally repurposed as a retirement home for nuns and as a school at the same time. In 2011, the nuns permanently left the original buildings and the city of Deauville decided to acquire them.

Philippe Augier, Deauville’s mayor since 2001, had a precise project in mind: to turn the building, ideally situated in the city centre, into a cultural hub capable of attracting both local residents and visitors. 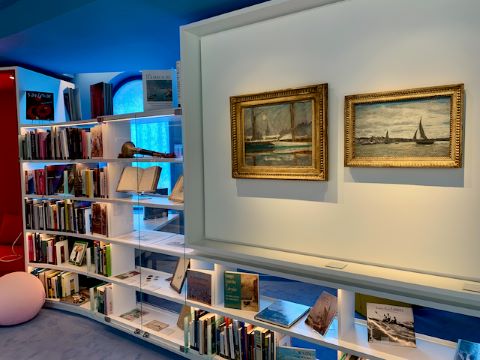 On the day I visited Les Franciscaines, welcomed by Rachel Brainin, who is in charge of commercial development and partnerships, it felt like the bet is working: the place was buzzing, certainly helped by the recent reopening of museums and other cultural institutions. The crowd was a mix of locals (many families with young children taking advantage of the vast and welcoming media library) and tourists (eager to explore the André Hambourg museum and the inaugural exhibition, “ On the roads to paradise”). 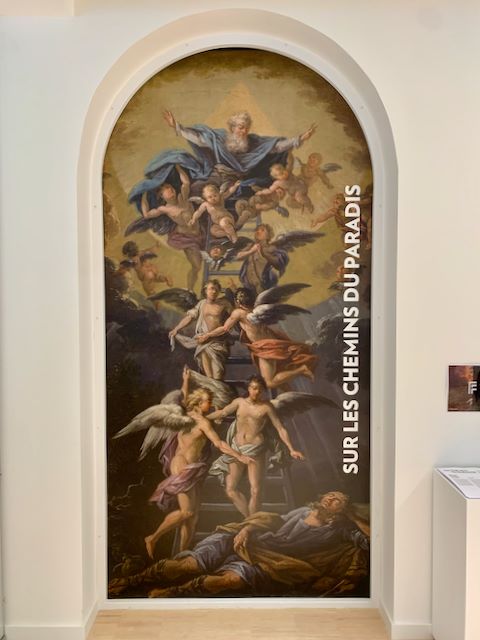 The heart of the building is its former cloister, now a covered courtyard dotted with comfortable sofas and armchairs. Access to this portion of the building is free, and even non-members can plop down to read one of the many magazines on display, or grab a coffee or a light bite at the café. From the ceiling hangs a sculptural installation made up of thousands of transparent rods that form a milky cloud filtering the light and giving the place a dreamy feel. I can easily picture hunkering down here on a rainy afternoon with a good book and a cup of tea. 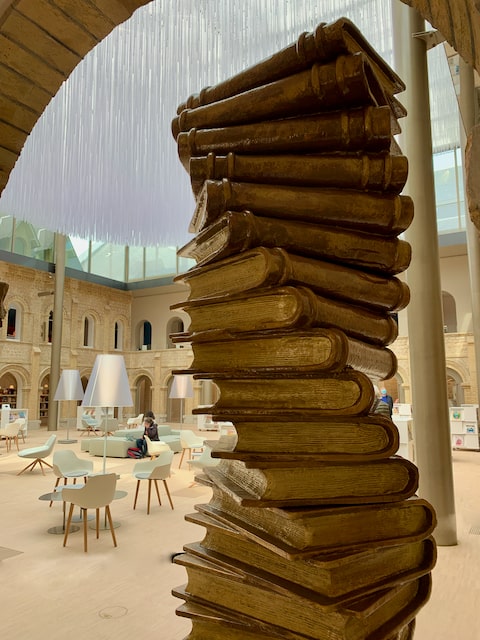 The architects in charge of the project, Parisian agency Moatti & Rivière, have done a fantastic job repurposing the buildings. 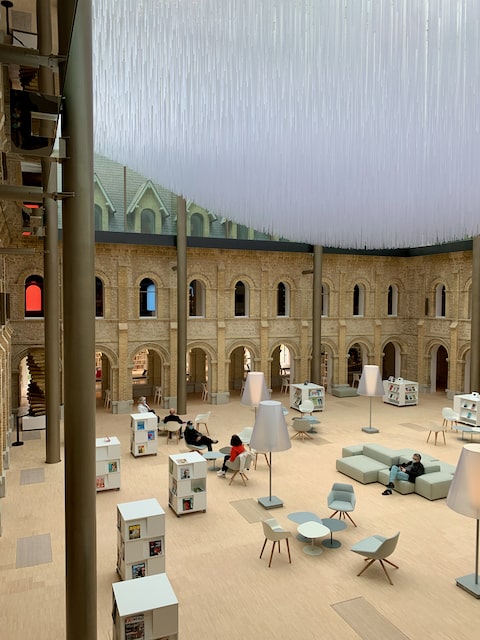 Taking advantage of the height of the original building, they have installed the media library on the first floor, looking down through clearstory windows on the courtyard. The library is divided into four sections, in tribute to what Deauville is famous for: cinema, horses, art de vivre and its own history. There is art everywhere, as Les Franciscaines not only displays works on loan from major museums that share the common theme of “painting Normandy” but also contemporary photography issued from its partnership with the Planches Contact photography festival. It is probably as close as I shall ever get to a masterpiece by Corot, Bonnard or Dufy, a luxury museums normally do not afford. 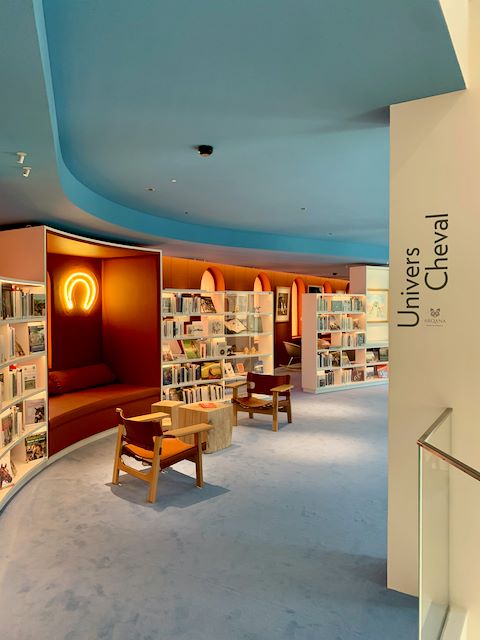 Les Franciscaines wants to appeal to locals, not only thanks to this welcoming library but also through the Fab Lab. It is a skills laboratory where people can learn about programming and how to use the industrial machinery on offer. It welcomes start-ups needing to build prototypes, but also teenagers and adults wishing to expand their competences. 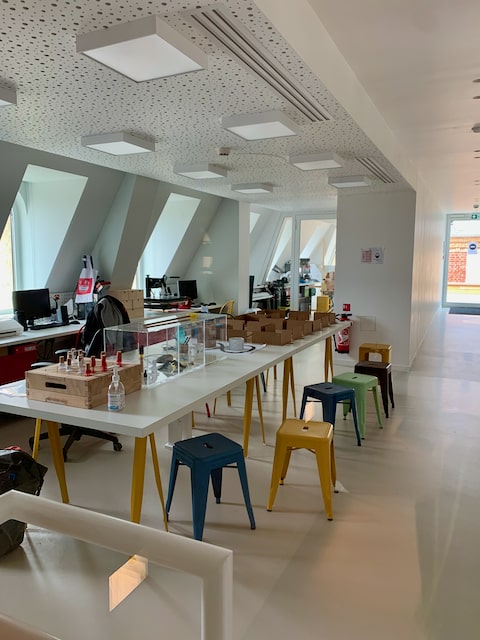 The former chapel has been turned into an auditorium with a capacity of 230 people. It offers maximum flexibility as all the seats are retractable, turning the space into a ballroom for a party or a gala dinner. The original stained glass windows have been lovingly restored by local artisans but there are no other apparent religious signs, as Les Franciscaines is a resolutely secular space. 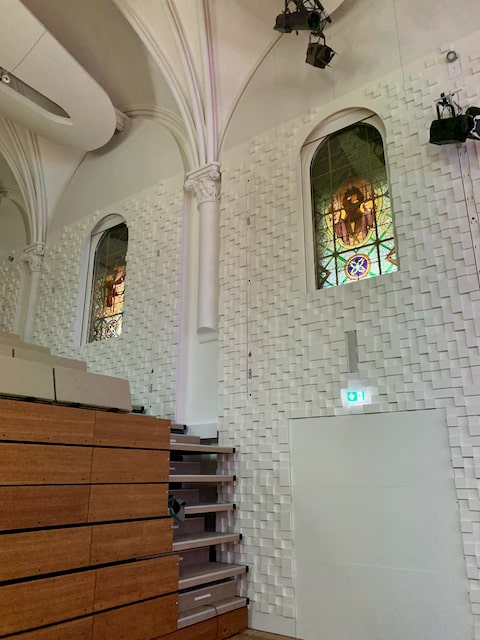 In the adjacent buildings are housed the André Hambourg Museum and the temporary exhibition spaces.

The Hambourg Museum displays the collection bequeathed by his widow, and includes not only works by the painter but also those gifted to him by other painters, including illustrious members of the School of Paris, like Moïse Kisling. The official painter for the French army and explored extensively far flung destinations, drawing inspiration from Impressionism and Orientalism. Because of his military connections, he was chosen by the American Army to record for posterity The Berghof in Berchtesgaden, Hitler’s mountain retreat, before its destruction at the hand of the British in 1945. 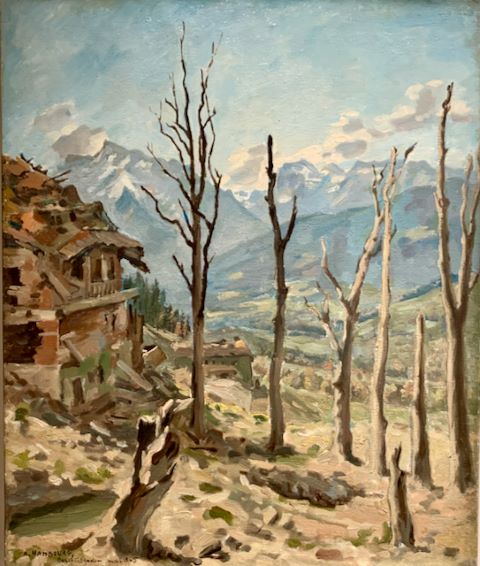 The inaugural temporary exhibition, “The Roads to Paradise”, curated by Régis Debray, member of the Goncourt Academy, examines the concept of paradise and its representation in the three monotheistic religions. With the help of historians, philosophers and religious scholars, the curators have put together a show that mixes classical art (on loan from some of the most prestigious museums in the world) with contemporary pieces, like this monumental sculpture by Canadian artist Nicolas Baier. It is called Eternity, because the seemingly abstract steel shape spells the word eternity. Due to its scale, the waiting, as much as afterlife itself, cannot be seen by the visitor. 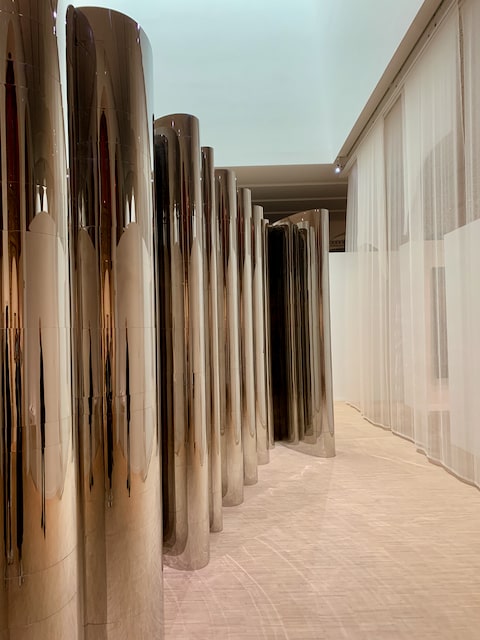 I spent a magical moment at Les Franciscaines, and I am sure that the cultural centre will be a resounding success. When you are next in Deauville, make sure to see it. I, for one, will surely be back in October, for the Planches Contact photography festival!