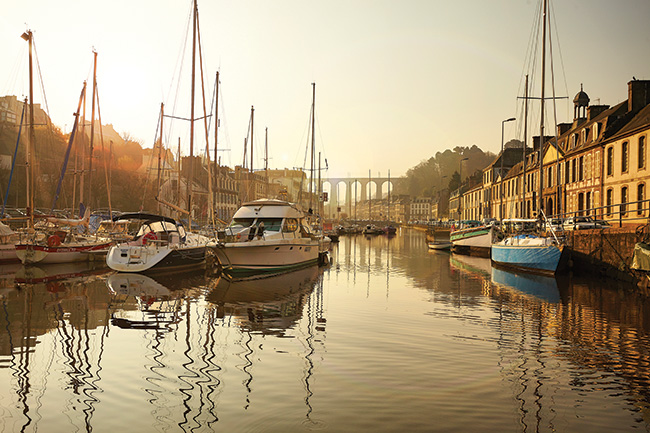 Often overlooked by British tourists, Morlaix Bay is home to stunning scenery, fabulous produce and incredible places to visit. Annaliza Davis explains why this area just across the Channel is well worth an extended visit.

Located in northwest Brittany, Morlaix Bay includes some of this corner of France’s most photogenic landscapes and heritage sites. It reaches east from Roscoff to Carantec, Plougasnou and Locquirec, and down inland towards the moors of the Arrée Mountains, Saint-Thégonnec and Guerlesquin. It encompasses remote, hushed hamlets, dazzling seaside resorts and historic town centres as well as Neolithic sites and châteaux, so there really is something for all tastes here.

The Riches of History

The town of Morlaix dates back 1,200 years to when a château and three abbeys were built where the River Queffleuth met the River Jarlot near the English Channel. Known to the Romans as ‘Mons Relaxus’ (‘restful mount’), the town’s economy truly began around 1110 AD when ship owners, weavers and a group of linen merchants joined forces and began the trade of weaving. By the 1500s, the area around Morlaix was filled with crops of hemp to be transformed into linen fibres, which were in turn woven into linen. The market for high-quality linen sails prospered for three centuries, so the local traders made a great deal of money, directly influencing both the evolution of the town and its architecture.

As you wander through the streets, you’re sure to notice the timbered buildings, built from the 1500s onwards by rich linen merchants looking to display their wealth by commissioning this impressive architecture. Particular to Morlaix are the Pondalez houses whose unique timber-frame structure includes an inner courtyard and overhanging upper storeys which created shelter for the pavements below. Morlaix has no fewer than 152 timbered buildings, but two are particularly noteworthy. Firstly, La Maison dite de la duchesse Anne has a surprising inner courtyard and decorative sculpted staircase; saved from destruction back in the 1880s, it is now open to visitors. Secondly, the Maison à Pondalez on Grand Rue, which was fully renovated in the 1990s, is now part of the town’s museums.

Many delights await along the coastal path to Carantec © Alexandre Lamoureux

The maritime trade of Morlaix and its neighbours continued to drive the local economy and led to a town-centre port being built during the 1730s. As well as attracting tourists, the sea continues to support the economy through oyster production, seaweed and algae industries and seawater spa treatments, including the Thalasso Spa at Roscoff. As for Morlaix’s iconic viaduct, it was built between 1861 and 1863, spanning 292 metres and rising 62 metres into the sky. The uppermost level carries the Paris-Brest train, but there is a walkway – the Promenade de Guichen – underneath which is open during the day for pedestrians who want a unique high-rise view over the town!

If you arrive at Roscoff, take time to explore its cobbled streets, quirky museum, exotic garden and perhaps take a boat trip to the nearby Île de Batz, or drive towards Morlaix and stop at Carantec, a seaside resort with fabulous coastal walks offering unparalleled views. As well as its shops, port and beaches, Carantec offers the chance to walk to the island, Île Callot, whose pathway is revealed at low tide. South of Morlaix Bay, you’ll find the Arrée Mountains, a stunning landscape of moorland and heather adored by hikers and mountain bikers, with a real sense of endless skies. Finally, if you get the chance, drive east to Guerlesquin, a small market town with unique heritage which includes a tiny town-centre prison complete with turrets.

The Château du Taureau casts an unmissable silhouette on the horizon as you gaze out to sea, and its history is fascinating. A fortress with a cannon was constructed on a rock here in 1542, perfectly placed to guard Morlaix against the English, who had pillaged and destroyed the town 20 years earlier.

Around 1680, it underwent a radical transformation thanks to Vauban, the military engineer appointed by King Louis XIV. Vauban reinforced the fortress in granite, extending it to 60 metres to house 11 cannons, soldiers, two cells and facilities for rainwater collection. The work took 45 years to complete.

In 1721, the fortress became a prison, often for men whose families found them troublesome: they had them locked up and paid for their keep… once they stopped paying, the prisoner was released! The political prisoner Louis Blanqui was the fortress’s last inmate in 1871.

The rest of Taureau’s history is rather more pleasant. Classed as an Historic Monument in 1914, it was rented to the Vilmorin family in 1930 who used it as a quirky summer home. Later, from 1960 to 1980 it was home to a sailing school. Finally, an association was created to save the fortress from falling into ruin and to open it to the public. Thanks to vast restoration work, it opened in 2006 and has been welcoming day-trippers into its cells and ramparts ever since, courtesy of regular boat trips.

A visit to the Château du Taureau is one you’ll never forget, and it’s only accessible by a boat that you book in advance. Once an inescapable offshore prison, Taureau has lived through various transformations (see panel) and is now open to day visitors and offers audio visits in English.

2. Walk to an Island

Here’s an island you can visit without a boat: Île Callot is connected to the mainland by a path which is only revealed at low tide. Explore this minute island, its church and coastline, but do check when the tide rises and falls or you could be stranded!

Morlaix’s Saturday morning market bursts with colour, chatter and activity, seafood, baked goods and fresh produce as well as flowers, clothes and crafts. If you miss it, don’t worry – there’s a market every morning in one of the local towns.

4. The Coast and the Corniche

If you’re here with a car, make time to explore the coast road: it follows the sea from Roscoff right back up to Locquirec but if you don’t have all day, focus on the coastline from Carantec to Locquénolé, down into Morlaix, then up towards Cairn de Barnenez and Primel. You’ll be spoilt for picture-perfect views.

Morlaix offers a two-hour walking trail – le circuit des venelles – around the town’s cobbled streets, through the historic highlights of the town, including the iconic Pondalez houses. Or try La Vallée de la Pennélé, a three-hour trail from the port up to the woods and river, along the former railway and back into town. Download the routes from baiedemorlaix.bzh or visit the tourist office.

Lead photo credit : The port at Morlaix is the beating heart of this historic Breton town © Alexandre Lamoureux