My Life in Paris: Oh What a Circus! 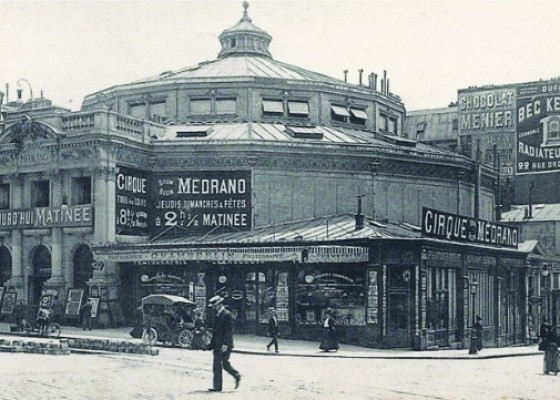 As we try on our new vêtements de sport, which were purchased at Décathlon on the Place de la Madeleine, my sister Wendy’s shriek nearly shatters the red wine glasses. “Size too small?”, I tease. “No, it’s missing!” Wen says, pointing to the waist of her harlequin-style running tights. “I’ve lost my pedometer! I must have dropped it outside Carrefour.”

An hour earlier, shopping in anticipation of the Paris-Versailles race, we’d ‘divided and conquered’, to save time and energy. While I hunted for race day essentials like coffee and Prince biscuits (by the 19th-century bakers, LU), Wendy had sat outside on a concrete slab and watched our bags.

“Grab your coat! Let’s retrace our steps.” Then I go Napoleonic. “Victory belongs to the most persevering!”

More diary than gadget, my sister’s pedometer not only tracks steps, but also experiences. During the day, we’d charged up the hill to Sacré-Coeur before aqua-biking in Saint-Germain-des-Prés, then shopped along the Boulevard Haussmann after learning how to make baguettes at a boulangerie. Wendy’s device would’ve recorded each step.

“We’ll find it, Wen,” I say, trying to stay positive. After all, according to Napoléon, “A leader is a dealer in hope”.

A miracle is exactly what we need now, with the sun already setting on our side of the Butte Montmartre and the Rue des Martyrs still packed with strollers. Long lines snake around Le Divan du Monde and the Cabaret Michou. It’s a chilly but picturesque l’heure bleue – even Monsieur Michou himself is out greeting his fans.

Somehow, in the midst of the swelling revelry, we stay focused. I scan the right-hand side of the cobblestoned rue, while Wen sweeps the left. Reaching Carrefour a few streets later, we search the vicinity of the big grocery store that now occupies the site of Picasso’s favourite, the Cirque Medrano. Long-gone are the days when acrobats, clowns, trapeze artists, lions and horses cavorted in its ring – now only cookies and milk fly (off the shelves) there.

Sadly, the pedometer is nowhere to be found but, not wanting to throw in the towel just yet, I suggest that we walk back toward the Pigalle Métro station, which we’d exited just before the grocery store run. As we cross over to Boulevard de Clichy, I hear Wendy say, “I see it!”

She takes off running. I follow suit. She approaches a man who’s hunkered down, seemingly transfixed by the little royal-blue gadget in his hands. At first, he doesn’t see us.

“Please, sir,” my sister says. “It’s mine.” She lightly taps it with her fingers. He looks up. His eyes are black and his white hair shimmers under the street lamp. “No, it’s mine,” he says.

We’re standing outside a music shop. The nearby neon signs cast a reddish glow against the man’s coat. Wendy repeats her plea, then adds, “I will pay you.” Their eyes lock and I brace myself for a request for a large sum of money.

Instead he presses his hand to his chest and asks, “For your heart?” He must think it’s a pacemaker. “No, for my feet. A pedometer.” At this he laughs, almost relieved, then shakes his head and hands it to her. Wendy thanks him, offering the entire contents of her coat pockets. He refuses the money, but takes a mint. She thanks him again.

“C’est normal!” he says, and walks away. My sister and I don’t move. We just stand there, silently, in the doorway of Picasso’s former digs, which is now Star’s music shop.

Was it more than coincidence that we were just a few streets down from the Place Blanche, finding ourselves dependent on the kindness of strangers? Maybe Picasso was right: “Everything you can imagine is real.”