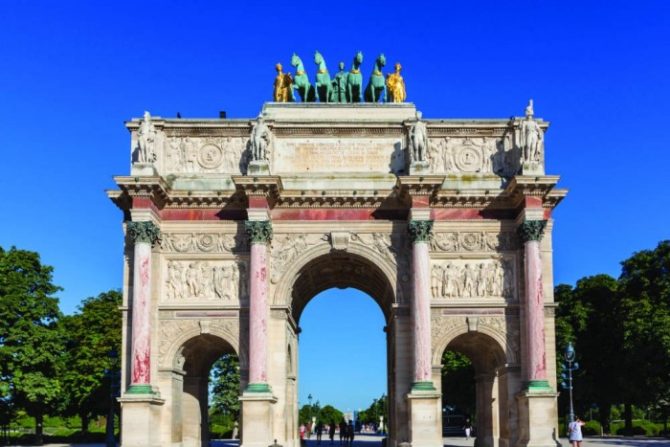 When thinking of Napoléon, his military genius first comes to mind. We picture him as ‘le Petit Caporal’ (‘the Little Corporal’), with his hand-in-waistcoat gesture and his hat sported en bataille (sideways). This image is reinforced by the portraits of Jacques-Louis David and also by Charles Émile Seurre, whose recently restored statue of Bonaparte stands in Les Invalides’ courtyard, although it was designed for the Column of the Place Vendôme and placed on top of it in the presence of King Louis Philippe I in 1833.

After his fall, Napoléon’s earlier statue atop the Column, which depicted him as a Roman Caesar, was recycled into the familiar statue of King Henri IV which adorns the Pont-Neuf. As for Napoléon’s famous bicorne hat, he’d actually worn 50 of them during his career, losing many in battle, trampling others in his choleric fits. All were made to order by Monsieur Poupard, his official hatter, from Le Temple du Goût, at 32 galerie Montpensier in the fashionable Palais Royal.

Napoléon’s military glory is imprinted all over Paris – on the Arc de Triomphe, on the Boulevards des Maréchaux on the city’s inner ring road. His generals are honoured on the city’s streets and by its Métro stations – Kléber, Cambronne, Duroc, Lecourbe.

Statues of some 32 generals sit in niches on the northern façade of the Louvre, along the Rue de Rivoli. While a gilded ‘Victory’ glitters atop the Colonne de la Victoire in the Place du Châtelet, the Vendôme Column depicts Bonaparte’s most decisive battle, at Austerlitz, which a railway station and a bridge also honour. These are mirrored, in London, by the railway terminus and Thames bridge named after Waterloo.

Among the many Parisian streets and bridges which commemorate Napoléon’s victories in Europe and the Middle East are Rivoli, Castiglione, Wagram, Ulm, Iéna, Arcole, Aboukir, Alexandrie and Caire.

Paradoxically, Napoléon himself is absent from the streets of Paris, except on the Rue Bonaparte, which reflects the controversial figure he cuts among the French. However, none will dispute his genius in battle, nor his role as the mastermind of the infrastructure of modern France and of her legal code, the Code de Napoléon or Code civil des Français.

His phenomenal legacy can be read summarily in the bas-reliefs that encircle his tomb at Les Invalides. Yet few are aware of his immense contribution to the development and modernisation of Paris, which is inevitably overshadowed by Baron Haussmann’s. Yet, it was Napoléon who first dreamt up Paris as the modern Rome and capital of Europe, and it was he who started clearing the medieval streets and opened the city’s first wider vistas. Sadly too, ahead of Haussmann, he swept away magnificent monuments, notably the Les Feuillants Convent, to make room for the Rue de Castiglione, which leads to the Place Vendôme. Rue de la Paix, then known as Rue Napoléon, completed his regal plan.

It was Napoléon who also founded Paris’s sewage system and opened the Canal de l’Ourcq to tackle the city’s endemic water shortage. We owe him the city’s markets, the abattoirs that Haussmann would later rebuild, Père Lachaise Cemetery and even the street numbering system still in use today.

For lack of time and funding, Napoléon’s projects remained largely embryonic and were later absorbed into the Haussmannian fabric. The current exhibition at the Musée Carnavalet, Napoléon and Paris, sets things right.

This exhibition offers a unique opportunity to appreciate Napoléon’s extraordinary vision and gain an insight into life in Paris under his rule. Samples of the pomp and glamour lavished on the court are also on display, as is the Légion d’Honneur, created to reward and better control the new meritocracy. Exploring Paris in search of Napoléon’s city is an exciting treasure hunt that’s made all the more rewarding by a visit to this major exhibition.

From his seat in the Tuileries Palace, Napoléon summoned the inseparable architects/designers Charles Percier and Pierre Fontaine to open the arcaded section of the Rue de Rivoli alongside the Tuileries Gardens and the Louvre – this home to luxury shops excluded, by decree, those artisans using ‘ovens or hammers’ (ie bakers and butchers). This artery was meant to be extended across Paris, from the top of the Champs-Élysées to the Place de la Bastille and the Place du Trône (now the Place de la Nation) beyond. With its West-East orientation, it was to be une voie triumphale (a triumphal way), one intended to replace the royal medieval north-south axis along the Rue Saint Denis. Emulating the Via Sacra in Rome, it would be entered through a triumphal arch – on the future Place de l’Étoile rather than the Place de la Bastille, as first intended. For whereas in 1660, the newlywed King Louis XIV and Marie-Thérèse of Spain made their solemn entrance to Paris from the East, in 1810 Napoléon entered the city with Marie-Louise of Austria from the West. Making do with a mock-up of the arch, he nonetheless marked the site as the city’s official gateway to this day.

An enormous fountain featuring a bronze elephant was intended for the Place de la Bastille, instead of the arch, but only a plaster model was erected. Immortalised in Victor Hugo’s Les Misérables, the Bastille Column was inaugurated on its site (on its stead) on July 28, 1840.

Napoléon commissioned some 15 new monumental fountains to embellish and relieve the city, which were supplied by the Canal de l’Ourcq and the Bassin de la Villette. Napoléon’s pride, Pierre-Simon Girard’s fountain for the Place du Château-d’Eau (later the Place de la République), was moved by Haussmann to the Parc de la Villette. Its eight Nubian lions testify to the prevailing Egyptomania, as does the little known Fontaine du Fellah (Arabic for peasant) on the Rue de Sèvres and the astonishing Egyptian heads on one of the façades of the Place du Caire. However, the sphinxes of the Place du Châtelet were added under Haussmann.

Tucked away by the Champ de Mars, on the Rue Saint-Dominique, the Mars fountain is also part of Napoléon’s legacy. Erected to face what was then the Gros Caillou Military Hospital, which was demolished in 1899, it’s dedicated to Mars and Hygieia – the ancient god of war and the daughter of the god of medicine. The Fontaine de Mars restaurant next to the fountain hosted President Obama during his official visit of 2009.

Napoléon’s Paris reflects his love of Rome – the Arc de Triomphe was inspired by the Arch of Titus, while the Arc de Triomphe du Carrousel (built by Percier and Fontaine to serve as the gate to the Tuileries Palace) was modelled on the Septimius Severus, and the Austerlitz Column at the Place Vendôme took after Trajan’s Column. Pierre Vignon’s Temple de la Gloire de la Grande Armée (Temple to the Glory of the Great Army), now l’Église de la Madeleine, and Brongniart’s La Bourse (Stock Exchange), since redubbed the Palais Brongniart, emulate antique temples. So too does Bernard Poyet’s ‘new’ facade (1806-1808) for the Palais Bourbon (the National Assembly), which matches that of the Madeleine across the Seine and completes a glorious, 360-degree panorama when seen from the Place de la Concorde.

The project for an ‘Imperial City’ on the hill of Chaillot was meant to become Napoléon’s grandest statement but it never materialised. Its centrepiece, a palace for his son on what is now the site of the Trocadéro, would have faced the Champ des Mars and the École Militaire, where Napoléon’s Parisian life began when he was 15. Only the Pont d’Iéna (1808-1814) saw the light of day, one of the three bridges built under him, after the Pont des Arts footbridge (the city’s first iron span, 1804) and the Pont d’Austerlitz (1807).

Across the Pont des Arts to the Left Bank, on the Rue des Saints-Pères sits Debauve et Gallais, the city’s oldest chocolatier and purveyors of Croquamandes (coated almonds) to Napoléon. Its interior, a semi-circular colonnade in the manner of a Grecian temple – a “fairies’ palace”, according to the writer Anatole France, who was taken there as a child – was also designed by Fontaine and Percier.

Back on the Right Bank, the sumptuous interior of the Michelin-starred Le Grand Véfour, next to Les Jardins du Palais-Royal, has also remained as Napoléon knew it. He was still General Bonaparte when he dined there and the modest apartment above is reportedly where he and his beloved Joséphine were first introduced to each other, by its then occupier, the politician Paul Barras.

Napoléon’s journey ended at Les Invalides where, earlier, he had displayed a statue of a winged lion, brought back from Venice as a war trophy in 1797. Exiled to the island of St Helena following Waterloo, he died there in 1821. After Louis-Philippe was named King, his negotiations for the repatriation of Napoléon’s remains took seven years.

From Le Havre, the hearse entered Paris through the Arc de Triomphe on 15 December, 1840, then proceeded down the Champs-Élysées and across the Place de la Concorde to Les Invalides. Novelist Victor Hugo was among the huge crowd that snowy morning and he reported how the sun suddenly appeared at the same time as the hearse – he wrote that “the effect was prodigious”. However, it wasn’t until 1861 that, with a ceremony attended by Napoléon III, he was laid to rest – in a tomb designed by Louis Visconti – at l’Église du Dôme, in accordance with his heart’s desire, to be buried at Les Invalides “on the banks of the Seine, by the French people whom I loved so much”. He lies there surrounded by his two brothers, son and military heroes from many different eras.

Thirza Vallois is the author of Around and About Paris, Romantic Paris and Aveyron, A Bridge to French Arcadia. Visit her website: www.thirzavallois.com