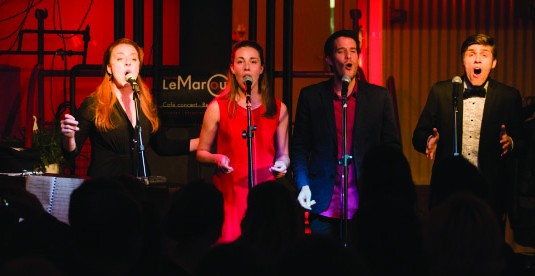 The stage is set at the Péniche le Marcounet, a typical Parisian barge moored on the Seine, just a stone’s throw from the Hôtel de Ville, on the first Monday of the month. AMT alumni Vincent, Jonathan, Devon and Lauren join keyboard maestros Raphael and Mathieu to host the evenings, each of which has a different theme, such as the seasonally-appropriate Winter Wonderland (December) and The Golden Age (January).

Kick back with a drink while taking in impassioned performances by a mix of professional and amateur vocalists, and if you’re itching to grab the mic and shine, drop-ins are invited to sign up – check out the AMT Live! website for suggested songs and composers. it’s lots of fun!