Top French Beach Resorts: The Revival of Trouville-sur-Mer in Normandy 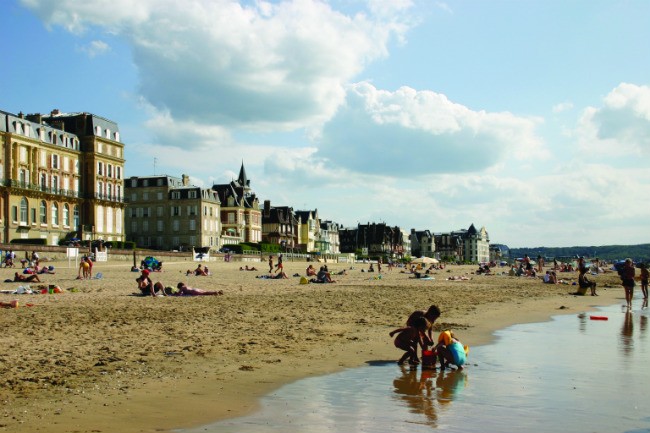 The reopening of the prestigious Cures Marines has brought a new lease of life to Trouville-sur-Mer, the Basse-Normandie seaside resort. The international elite once gathered at the Calvados resort, known as the ‘Queen of the Beaches’, to swim in the Basse Seine and take the town’s beneficial ‘waters’. Since April, for the first time in 16 years, Trouville’s famous thalassotherapy (sea water) treatments have been available at the luxurious Cures Marines spa, part of the Accor group’s five-star, 103-room MGallery Collection hotel of the same name.

The 70-metre Pont des Belges connects Trouville with Deauville, spanning the River Touques. The latter is a discreet and stylish family resort, while its more extravagant sibling rose from marshes drained by Napoléon III’s half-brother, the Duke of Morny. In former times, these neighbouring towns were competitors. But those days seem to be gone and locals on both banks of the Touques will reassure you that, above all, Trouville and Deauville are now most complementary.

The renovation of the Cures Marines, which first opened in 1903 and sits to the right of the town’s huge, neo-Classical casino, designed in 1912 by Alexandre Durville, was entrusted to Jean-Philippe Nuel, the man behind the revamp of Paris’s Molitor swimming pool. Nuel’s transformation, which has proved a great success, features a colour scheme of blue, grey and sand, airy spaces and carefully preserved original features. “I wanted to recreate a fresh and light-filled atmosphere,” he explains.

The 2,500sqm Cures Marines thalassotherapy centre, which is run by Thalassa Sea & Spa, boasts 32 treatment booths, a veritable army of 45 therapists and its centrepieces are two seawater pools decorated with giant stripes.

“The reopening of the Cures in this mythical building was greatly awaited,” points out Pascale Cordier, the Deputy Mayor in charge of culture and the environment. “It is a genuine resurrection, a coherent return to the past which is very much rooted in the town’s identity.”

Trouville’s identity is a sublime mix of nature and nurture. In 1825, the painter Charles Mozin visited the Côte Fleurie and found Trouville an incredibly charming fishing village, replete with brick houses, slate roofs and narrow passageways, and installed his easel on the long beach of fine sand. Isabey, Corot and Boudin were also seduced by the magnificent light.

On the look-out for a “little corner, a hide-out, just as long as it’s by the sea”, celebrated author Alexandre Dumas fell in love with Trouville, writing that “it used to be just as much ignored as Robinson Crusoe’s island”.

A few years later, the teenage Gustave Flaubert picked up Élisa Schlésinger’s cape on the beach. She was ten years his senior but he fell head over heels in love with her. Although it was a platonic relationship, Schlésinger inspired him to create the character of Mme Arnoux in L’Éducation Sentimentale (The Sentimental Education, 1869).

Trouville quickly became extremely fashionable, attracting aristocrats and wealthy industrialists – leaving Paris by train after 1863, and travelling from Le Havre, thanks to the steam ship line. On the sands, where great attention was paid to common decency, men dressed in bathing suits with straps, while women wore tunics decorated with piping. Ropes defined the areas of beach where it was possible to enter the sea, which most accomplished aboard wheeled ‘bathing machines’. The waters of the English Channel were claimed to be very therapeutic – they were even recommended for the prevention of rabies – although sunbathing was forbidden and deemed to be vulgar. The entire smart set met on Les Planches, a 925-metre boardwalk, which opened in 1867.

“People changed their clothes up to six times a day,” recalls Karl Laurent, the director of the Musée Villa Montebello, which is devoted to Trouville’s history. “Concerts, balls and galas succeeded one another. At the Casino-Salon, people played billiards and cards. Extravagant houses started to appear on the seafront. Here a Persian villa for the princess of Sagan, there a neo-Louis XIII castel for the Marchioness of Montebello and, slightly further away, the medieval tower of Charles Mozin. The fashion was for travel, which explains this architectural eclecticism.”

Imposing luxury hotels were built, the Hôtel des Roches Noires, opened in 1866, was considered one of the most ‘modern’. Marcel Proust was a regular guest and Trouville’s high society provided him with inspiration for In Search of Lost Time (1913). Renovated in 1924 by architect Robert Mallet-Stevens, the hotel was turned into apartments. Marguerite Duras bought an apartment there in 1963 and spent each summer at Trouville until her death in 1996.

The end of Trouville’s ‘Golden Age’ came in 1912, when the vindictive Eugène Cornuché, a former café waiter who’d created Maxim’s restaurant in Paris and ran the town’s Casino-Salon, deemed it to be outdated. It was a dispute with Trouville’s councillors that drove the furious Cornuché across the Touques River to Deauville.

Since Morny’s death in 1865, Deauville had been dormant and the Queen of the Beaches enjoyed an undisputed advantage. Deauville had even agreed that, in exchange for a third of the fees from Trouville’s Casino-Salon, gambling for money would be forbidden in the municipality. Cornuché broke this monopoly by commissioning the construction of a huge casino in Deauville. On both sides of the Touques, the question on everyone’s lips was who could create the most sumptuous establishment? The two casinos opened in 1912, just a week apart. Trouville lost the bet and it wasn’t until the 1930s that, thanks to Mayor Fernand Moureaux, the town was able to recover. Moureaux modernised the town, not least installing an Olympic-sized pool and promoting the local, neo-Norman architecture, of which the Poissonnerie (fish market) and the Hôtel Flaubert are wonderful examples.

Today, Trouville cultivates its difference, as a seaside resort with a well-preserved heritage that’s still an active fishing port. Some 27 trawlers supply 11 stalls at the town’s covered market with scallops, sole, prawns and mackerel. Trouville is the Basse Seine’s leading mackerel port and was recently awarded a “Maquereau Trouvillais” quality label to prove it.

The town’s population of 5,000 quadruples during the summer, when families and sportsmen rub shoulders with celebrities along the lovely ‘Promenade Savignac’– named after famous French poster designer Raymond Savignac (1907-2002), who retired to the town.

Several hoteliers have taken advantage of the Cures Marines’ revamp, opening up charming boutique hotels. New stores are springing up along the Rue des Bains and the Rue Victor Hugo. Trouville’s cultural events also attract an increasingly large number of visitors, such as the Off-Courts short-film festival (September), the Book Fair (October) and the weekends devoted to Marguerite Duras (October). The Queen of the Beaches is wearing her crown once more.

What is it? A well-being therapy which involves the use of sea-water and marine minerals. Used as both a relaxing detox and as a treatment for ailments such as arthritis, muscle fatigue and skin conditions. Trace elements of minerals are believed to be absorbed by the skin during treatments.

Who started it? Although the name derives from Thalassa, the Greek word for sea, in more modern times, the treatments were widely adopted along France’s Atlantic during the 19th century, especially in Brittany and Normandy. It became fashionable to visit the regions’ resorts, try the various treatments on offer at a range of grand sea-side hotels and dedicated spas, and benefit from the sunny and fresh coastal climate.

Where can I try it? There are many thalassotherapy centres in France, often linked to hotels on the western seaboard, from the cures marine at Trouville down to Biarritz near the border with Spain. There are also a number of spas and clinics on the med. For more information, visit: www.france-thalasso.com

By car, take the A14 and A13 autoroutes. Trains run direct to Trouville from Paris Saint-Lazare in two hours. www.voyages-sncf.com

Cures Marines: We particularly appreciated the luxurious rooms with their beautiful frescos, the glamorous bar, chef David Drans’s gorgeous seafood and the spa sessions under a ‘Iyashi dome’, a Japanese sauna that uses infra-red lights to purify the body.

Pillet-Saiter: The freshness of the seafood served by this stall on the terrasse of the Poissonnerie is astonishing. It’s presided over by Sébastien Saiter, a seventh-generation fisherman whose ancestors created their bottled ‘Jeanette’ fish soup in 1887.

Musée Villa Montebello: Trouville’s museum dedicated to the town’s history and mer-themed arts is a treat which features watercolours by Boudin, engravings of 19th-century sea bathers and the light-filled works of André Hambourg. Since October 17, there’s an exhibition entitled à Table!, devoted to the works of poster designer Raymond Savignac.

Boat trips: Enjoy a 30-minute coastal tour on the Gulf Stream II, or a 45-minute trip around Deauville marinas on Le Petit Loulou.