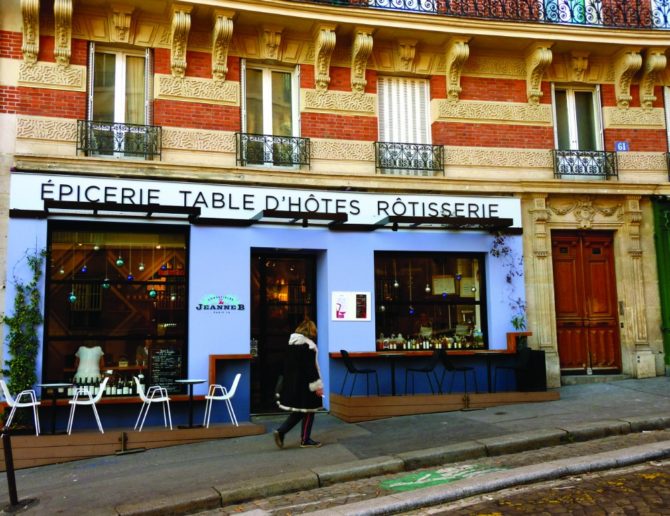 Whether you’re a first-time visitor or returning for another sojourn, Montmartre has a way of seducing you. The ancient hilltop neighbourhood, located in Paris’s northern 18th Arondissement, was once a playground for such artists as Renoir, Toulouse-Lautrec, Van Gogh and Degas. Montmartre is celebrated for the quaint atmosphere that permeates its cobblestoned streets, which has been immortalised in such films as Amélie (2001), La Vie en Rose (2007) and Midnight in Paris (2011).

The area has been a popular haunt for bohemians and creative types since the late 19th century, but recently much has been made of its so-called ‘death’ due to gentrification, which has allegedly stripped Montmartre of its soul.

Without a doubt, the quartier has seen many changes over recent years. Rising property prices mean that the artists have moved out and the moneyed in, and the local authorities have chased out the area’s pimps and prostitutes. However, although Montmartre remains synonymous with the lovely Sacré Coeur Basilica and the nearby Place du Tertre – not to mention the tacky souvenir shops which flank them – a quintessential Parisian spirit still exists only a short walk away.

This can be felt in the charming ‘village’ of Abbesses, which is abundant in bars, restaurants and small, independent stores, many scattered along the street of the same name, rue des Abbesses.

There you will discover that the curious mix of 30 and 40-something ‘bobos’ (bourgeois-bohème), wide- eyed tourists and the odd drag queen or flamboyant cabaret owner make for great people-watching. Abbesses is animated at any time of the day, but really comes to life in the early evening when the locals return from their travails and descend upon the neighbourhood bars and bistros for an apéro.

One of the best places to soak up the authentic Abbesses atmosphere is La Mascotte at No 52, a veritable Montmartre institution housed in an old hôtel particulier which, at one time, hosted the chanteuse Edith Piaf.

Established in 1889 and run by the Campion family since 1965, this cosy, traditional brasserie is famous for its seafood (there’s also an oyster bar, L’Écaille de la Mascotte, next door) and attracts a colourful clientele from posh ladies to bon vivants. Most of them are there to savour the towering seafood platters while admiring the beautiful décor; a handsome combination of wood and wintergreen accents, Art Deco light fixtures, tiles à l’ancienne and a zinc bar in the front of house. The festive musical Sundays always draw an enthusiastic crowd but the tables of La Mascotte are packed at all times, with patrons sipping coffee or something a little stronger.

Blink and you’ll miss it but La Cave des Abbesses at No 43 is another preferred place for a tipple. At first glance it’s a well-stocked wine cellar, but past the rows of floor-to-ceiling bottles and beyond the back door is a simple bar serving fantastic wines.

Those who require takeaway treats should head across the road to No 32, La Butte Fromagère – for what L’Objet Qui Parle is packed with 19th century treasures is vin without fromage? You can choose from no less than 160 varieties of fromage – of course the store vends comté and chevre, its top sellers, but it also stocks harder to source varieties, such as Irish cheeses or Moliterno laced with black truffles.

Pair your cheeses with a freshly- baked loaf from Au Levain d’Antan at No 6 – its bright blue façade and the constant queue of customers outside mean that the award-winning boulangerie is easy to spot. Owner Pascal Barillon has been in business since 1976, and in 2011 he beat 173 other bakeries to win the annual ‘Best Baguette in Paris’ competition.

Au Levain d’Antan is only steps from what many would agree is the heart of the village, the Place des Abbesses, known for its carousel and the entrance to the Abbesses Métro. The latter features one of only two original Art Nouveau canopies in Paris, designed by Hector Guimard. From there, a short stroll westwards takes you past another Art Nouveau relic, the Church of Saint-Jean-de-Montmartre, built between 1894 and 1904.

Another notable monument is the neoclassical Théâtre de la Ville at No 31, which should not be confused with its sister venue of the same name in Châtelet. Set slightly back from the street and accessed by crossing a small courtyard, it is renowned for world music concerts, and avant-garde dance and theatrical productions.

In recent years, some of the most popular contemporary French labels have opened boutiques at this end of the Rue des Abbesses. The likes of Chattawak, Comptoir des Cotonniers, Sandro and Petit Bateau – plus Maje and Les Petites, a few minutes’ walk away on Rue des Martyrs – offer the key to Parisian style.

As the Rue des Abbesses merges into the Rue Lepic, these slick clothing stores give way to fruit and vegetable stands, specialist traiteurs, and sidewalk cafés. This ancient road, which climbs the Butte de Montmartre, was built for Napoleon so he could travel by horse to the top of Paris in no more than five minutes.

Perched halfway up Rue Lepic, at No 61, is Jeanne B: part épicerie, part deli and part casual eatery, with an incredibly varied menu which changes weekly. The atmosphere is laid back at this neighbourhood favourite, where diners feast on honest, home cooking and French comfort food. The signature dishes at this table d’hôte are roasted chicken with gratin dauphinois and the croq’homard, a luxurious twist on the croque monsieur. You can also order a fancy picnic and stock your pantry from a range of gourmet products.

Les Petits Mitrons at No 26 Rue Lepic is recommended for dessert. This well-known pâtisserie is the place to go for mouth-watering sweet and savoury tarts – their secret apparently lies within the lightly caramelised crust.

As the Rue Lepic winds its way up the Butte de Montmartre, you can catch a glimpse of the Moulin de la Galette, also known as Blute-fin, which dates to 1622. Out of 14 windmills which were originally scattered throughout Montmartre, only two exist today, namely Blute-fin and the adjacent Radet, which was built in 1717 and now houses a popular restaurant.

The name of the former comes from the brown bread, or galette, produced by its 19th century owners, the Debray family of millers. The classified monument, which is now private property, has inspired such legendary artists as Picasso, Van Gogh and Renoir – the latter’s painting Bal du Moulin de la Galette (1876) is on display at Paris’s Musée d’Orsay.

Although Montmartre may no longer be the haven for artists that it once was, a handful of galleries and ateliers aim to keep the tradition alive. Galerie Chappe at No 4 rue André Barsacq is an intimate space which features a different exhibition of contemporary artwork each month.

Down a narrow stairway lies the Rue des Trois Frères, a street awash in trendy bars and restaurants. This thoroughfare is also known for the Marché de la Butte at No 56, a small grocery which memorably appeared in the hit film Amélie.

A couple of streets downhill, near the eastern end of the Rue des Abbesses, a plethora of bars and boutiques tumble down the Rue des Martyrs. A tiny brocante at No 86 Rue des Martyrs, L’Objet Qui Parle, boasts a fascinating collection of antiques and bric-a-brac which draws an endless stream of bargain-hunters, interior designers and curious passers-by. This treasure trove, with its original tile features and rustic wooden door, sells vintage cutlery, fine china, glassware, wallpaper, ornate frames, bell jars of all sizes, gilt mirrors and centuries-old chandeliers. There are also more eccentric items, from taxidermy and mannequin parts to puppets and religious figurines, all packed in wherever there is space – it must be seen to be believed. The friendly owner, who admits having a soft spot for anything from the 19th century, sources pieces from all over the world and they make for unique souvenirs.

Indeed, that is the beauty of the ‘village’ of Abbesses, it is full of places which you would not necessarily expect. It is very easy to lose yourself among these streets – they seem to lead into one another, suddenly and unexpectedly meeting at the top or bottom of a stairway, or finish on a small, seemingly hidden square.

Some may argue that Montmartre’s true spirit is long gone, while others believe it lives on in Abbesses, which still has a few surprises up its sleeve. And that is something which sets it apart from other Paris neighbourhoods, where the straight, wide Haussmannian boulevards mean that you always know what you’re getting and where you’re going. Despite Montmartre’s tourist- magnet status, you can always find a corner which feels like it hasn’t yet been discovered, a place to call your own, even if for a brief moment.

Pascal Barillon has now tended to the ovens of this small boulangerie for 28 years. Although Au Levain d’Antan’s fluffy brioche has won Barillon rave reviews, in 2011 its baguette was voted Paris’s best, earning the boulanger the honour of supplying the Élysée Palace for a year.

This minuscule but eye-catching brocante is a sort of Ali Baba’s cave in the heart of Montmartre, bursting with a curious mix of vintage and antique treasures. It is the place to go for an eclectic piece of home decor which is bound to be a conversation-starter.

This independent wine cellar has been run by a father and son team since 1986. Hidden beyond its back door is a cosy bar which is a local favourite. Take a seat at a tile-topped table and enjoy a petit verre while sampling some delicious charcuterie and cheese.

A neighbourhood institution with a great selection of sweet and savoury treats, from yummy tarts and quiches to pastries and cookies, all of which are packed in pretty pink boxes to take away. The apple and rhubarb tart is a real winner!

Barely a year old, this is the little sister to Jeanne A, the eat-in épicerie in the 11th arrondissement, and can already boast a loyal clientele for its delicious cuisine familiale. Some 60 different dishes are created in the open kitchen each week, and takeaway is available too.

Attached to legendary Montmartre brasserie La Mascotte, this beautiful seafood bar boasts a wide range of fruits de mer, including oysters from such top farmers as David Hervé, Gillardeau and Patrick Liron. It is open until 11:30pm, which is handy for those late-night seafood cravings.

Originally published in the Febuary-March 2014 issue of France Today