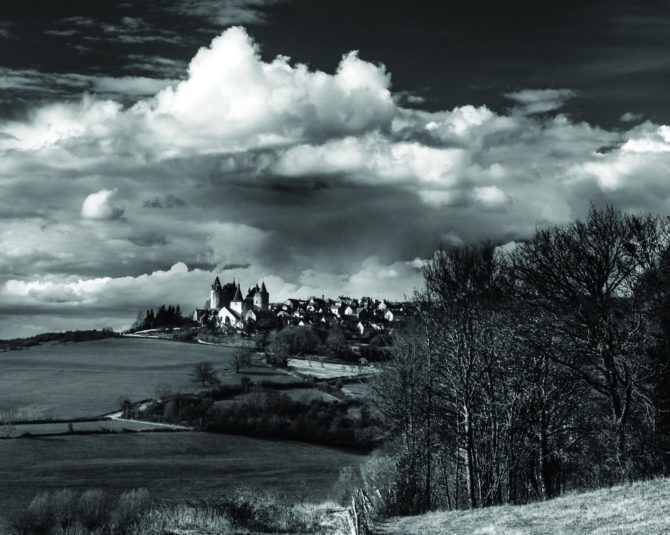 The green, rolling landscape of the Auxois lies west of Dijon, capital of the famed Bourgogne region. This part of central France is famous for the superstar wine growing areas of Beaune and the Côte-d’Or, which attract millions of travellers every year, all eager to discover the home of the prized appellations and to sample a grand cru or two. On a recent visit, I resisted the temptations of a dégustation amongst the vineyards of the Côte de Nuits and went a little further afield, to discover the towns and villages that lie quietly in the shadow of wine tourism.

The medieval town of Semur-en-Auxois sits perched on a massive bluff of pink-granite, above a deeply-cut, looping meander of the Armançon river. Early morning mists linger across the river as the dark waters ripple under the Pont Pinard, an ancient stone bridge over which one can imagine long ago the drovers and heavily-laden peasant farmers bringing their produce to market. One hundred and forty one broad and winding steps lead up from the bridge to the historic town centre so today it’s still possible to follow directly in the footsteps of those ancient visitors, arriving from the country to conduct their business behind the city walls.

As you look up, four majestic medieval towers loom imposingly, catching the first rays of the sun. Like four muscular sentinels, the Towers Géhenne, Margot, Orle d’Or and the Prison Tower, together with their adjoining stone walls, once formed an impregnable defence of the keep, protecting the inhabitants of Semur in times of siege.

Today, they are a picturesque and well-preserved legacy of former times – one is used as a museum and another as a dressing room by actors performing in the adjacent Théâtre à l’Italienne, which was founded in 1847. The Tower Orle d’Or – so called because a golden band of metal once fringed its stonework – has an enormous visible crack running in an alarming zigzag across and down its girth. But apparently we should not be too concerned – the fault has been there since 1602, which must count as one of the longest waits ever experienced for household repairs.

In the 13th century, Semur was the capital of the Auxois, replete with a bailiff appointed by Robert II, Duke of Burgundy. This created both wealth and protection for the town, laying a strong foundation which has allowed it to survive the centuries relatively undamaged. Rue Buffon, a pedestrianized zone, invites you to wander quietly past quaint, half-timbered medieval buildings which house an inviting selection of cafés and everyday shops.

Eventually, you arrive at the Collégiale Notre-Dame. This stately church was first founded in 1220 and has some beautiful wood carvings, statues and effigies dating from the 13th to 16th centuries, but much of its current, 19th-century exterior is thanks to Viollet le Duc, the famous architect of La Cité at Carcassonne.

Semur’s more distant past is celebrated each May with the Fête de la Bague, a medieval-themed extravaganza featuring knights, processions and – most famously –France’s oldest horse race, a flat-out gallop by chevaux detraits (working ‘heavy’ horses), who come thundering down a two-mile course.

This is a very attractive town – large enough to thrive asa modern civic environment but at the same time blessed with a picturesque location and bags of historic charm.

Just a short drive away from Semur lies the old village of Flavigny-sur-Ozerain, one of the many ‘plus beaux villages de France’. It sits high above the wooded valleys, on a fortified site carefully chosen to give its first inhabitants an early view of their visitors – early Gallo-Roman records show people living here from the period when Caesar triumphed over the Gauls in 52 BC at nearby Alesia.

It’s an architectural gem, a time-warp filled with a treasure trove of ancient stone buildings, some grand with balconies, towers and ornamental window decorations, others more plain and functional. For example, in Rue de l’Ancienne Cure stands the Tour de Guette, a 15th-century tower which was used to keep watch on the citizens and buildings of Flavigny. In medieval times, Flavigny had a reputation as a religious site, resulting from its possession of a number of holy relics, which were a magnet for pilgrims in the Middle Ages.

There are some fine religious buildings remaining today– the Benedictine Abbey of St Pierre was founded in 717 AD and although it’s changed much over the years since the French Revolution, you can still visit the beautiful Carolingian crypt, which was rediscovered in the 1950s by American archaeologist Fred Guggenheim.

The 13th-century Église Saint-Genest lies at the heart of the village and has impressive carved wooden stalls from the 16th century. Compared to the bustling market town of Semur, entering Flavigny on foot through one of the old gates is like wandering onto a film set.

It’s perhaps not so surprising that Flavigny was used in part as the location for the film Chocolat (2000), which starred Juliette Binoche and Johnny Depp, and one can see the now rather run-down granary which became the chocolaterie for the movie. Flavigny is popular with summer holiday homeowners from Paris and other parts of Europe, who delight in the picturesque character of the village, though the granary in particular could do with a little more tender care.

During the months of July and August the village livens up with holiday-makers and festivals but when I visited, in May, I was able to stroll around the ancient lanes completely alone. It was a slightly surreal experience – closed shutters everywhere and not a soul in sight. I was occasionally rather startled to round a corner and see reminders of the 21st century, like a car, an ‘à vendre’ sign posted on a property, or a glimpse of someone hanging up their washing in a back garden. This makes quite a contrast to the 1700s, when the village boasted over 1,300 inhabitants, including tanners, millers, tinworkers, stone-cutters, glass-blowers, weavers, tailors and lawyers as well as farmers and the clergy.

Meanwhile, back in the 21st century, every now and then I’d spy another visitor lurking down a tiny cobbled side street or staring up at some architectural detail. Later, like modern-day pilgrims, we few pedestrian visitors all emerged from the warren of lanes to gather at noon, hungry, outside the massive barn doors of the Auberge de la Ferme. A small party from a school and a handful of walkers and tourists enjoyed some hearty local produce grown on nearby farms, cooked on-site and served in the old barn by farmers’ wives and friendly family members.

A trip to Flavigny would be incomplete without a visit to the factory of Les Anis de Flavigny, which is located within the Abbey St Pierre. It is said that the monks were the first ones to wrap aniseed in sugar, to create a little sweet and healthy bon-bon – I suppose they must have wanted something to savour, to accompany their daily routine of prayers, toil and contemplation. Certainly, aniseed has been noted for its potential, as both a flavouring and a medicine, since Roman times. Ever since there were monks in Flavigny, there have been many anis sweet-makers on this site.

Following the French Revolution, the Abbey and its buildings were divided up and transferred into private hands. Now there is just the one producer, the family Troubat, who took over the business in 1923. Catherine Troubat employs around 35 local people in this unlikely yet historic setting, for an enterprise which brings not only employment but a sense of vibrancy to this otherwise sleepy village. At certain times you can visit the factory to see how the popular little candies are made.

But even in contemporary times, the sweet-makers and tourists don’t have the village all to themselves – a thriving legacy of Flavigny’s early religious communities remains. After more than a thousand years of religious history, there is still a Benedictine monastery located in Flavigny with around 50 resident monks – this beautiful, peaceful French village is a fitting location.

To reach Châteauneuf-en-Auxois, the next stop on our mini-tour, you drive South towards Beaune – it’s another ‘plus beau village’, only this one is less hidden away and stands proudly overlooking the Canal de Bourgogne with a 12th-century castle at its heart. The castle is an impressive reminder of the need to build fortified strongholds during the days of the Dukes of Burgundy.

Much of the castle’s architecture, monumental stone  walls, towers and pinnacle turrets date back to the 14th century, a time of great military activity during the Hundred Years War between France and England.

A macabre tale is told about when the castle’s last heiress and châtelaine, Catherine de Châteauneuf, was burnt alive at the stake in 1456, for attempting to poison her husband. Ownership of the castle was then assumed by the famous Duke Philippe le Bon and later his adviser, Philippe Pot. This splendid château is open all year round and it’s worth a visit to appreciate the monumental superstructure with its five towers, the 15th-century Grand Logis, the Logis de Philippe Pot, the Chapel and even the private rooms of the last owners, who donated the property to the state in 1936.

The streets surrounding the castle are picturesque and typical of the medieval and Renaissance architecture of the local area – Burgundian stone with red tiled roofs on many of the finer private houses dating from the 15th century. There are beautiful views across the hills and down to the canal from the tower and the many vantage points throughout the village. There are several cafés and restaurants and even a small hotel so although there isn’t a great deal to do in the village itself, one could use this as a base for touring the wider area.

Each July, Châteauneuf springs to life as a popular fête médiévale takes place, with troubadours, sword fighting displays, processions, a market, a banquet and medieval ball. There are also exhibitions of local painters in the Maison des Amis, opposite the castle.

Previous Article Jefferson in Paris
Next Article With Experience (my) France, You Will Live Like the Locals Do