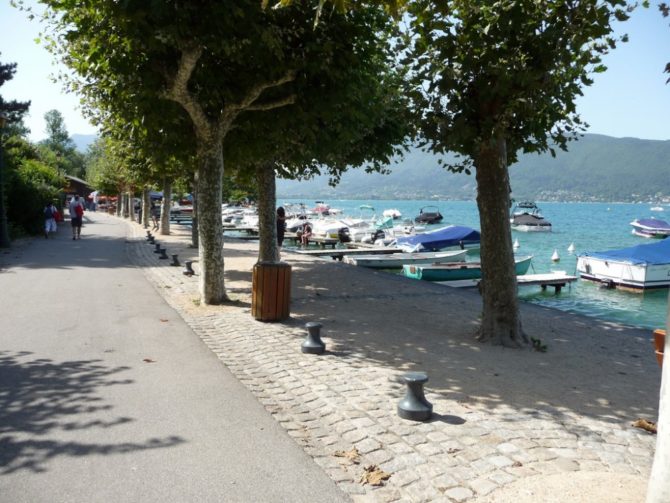 It comes as a bit of a shock, throwing open your bedroom shutters in a strange city, to find a café crowd staring up at you, and camera-pointing tourists taking photos. Entering my Annecy hotel room the last time I visited, I innocently opened my volets to discover that I was staying right over one of the town’s main medieval gateways.  I hadn’t expected to feel so exposed to the public. I resisted breaking into an aria; but Annecy, my opening experience reminded me, is one great stage-set – it’s all about show.

Beautiful arches and arcades are one of the most striking features of this exceptional historic place, the most famous and beautiful city in Savoie (Savoy). Canals are another, reflecting splendid buildings in surreal ways. The French regard Annecy as one of their prettiest cities, although the comparisons with Venice are irritating and, inevitably, exaggerated. However, Annecy really has no need for them. Its historic centre is seductive in the extreme. Its surroundings are stunning, with one of Europe’s most sensational lakes on the doorstep. Plus the place is overseen by remarkable mountains, which you won’t find in Venice.

Concentrating on the historic heart of town, old Annecy is intense. Intensely beautiful, intensely touristy, intensely crowded. Don’t come here for peace. Traffic jams, both of cars and of people, can be a major pain, but at least much of the very centre is pedestrianised. The canal sides are liable to be thronged with admiring onlookers. Likewise the narrow arcaded streets nearby, although Rue du Pâquier, boasting the remarkable Hôtel de Sales with its figures representing the seasons, is broader. You’ll find a plethora of chic boutiques and fine food shops around the old town. Rue du Pâquier’s more mundane continuation, Rue Royale, is lined with lots of well-known French stores.

My second day in town, I arose before the hordes to enjoy the calm of a perfect sunny summer’s morning in the city. Market traders were setting out their wares, chirpily exchanging banter. Along the canals, there was just the gentle ebb and flow of early risers. I was surprised to have such peace to attempt artistic photographs of old Annecy’s string of enchanting little bridges, framed by mountain tops in the distance, with the play of the facades in the waters at my feet. It was a magical time.

I even managed to get clear shots of the most famous and over-photographed building in town, the 12th-century Palais de l’Isle. Us writers tend to get carried away by it, comparing it to a vessel in stone gliding swan-like towards the lake. In truth, its stone looks somewhat harsh, and the place once served as a prison. That said, it remains sublime. Inside, its nooks and crannies contain a pleasant little museum on Annecy’s history.

It was through the medieval centuries that Annecy grew into a significant spot, ringed by spectacular ramparts. Vestiges remain of those medieval defences – for instance, the very gateway above which I found myself sleeping! The medieval lords’ castle still makes an unforgettable sight, its array of stocky towers rising above the old town, even if now outdone in height by the odd modern apartment block, and the soaring steeple of the 20th-century pilgrimage basilica built in honour of local saintly star François de Sales.

During the day, if you feel overwhelmed by the flood-tide of tourists, you can take refuge at one of the many wonderful café or restaurant terraces. As to the churches and museums, they can offer havens of peace, as well as religious and historic interest. In Annecy, as in Italian cities, though, you’ll find that even the religious can’t help trying to seduce you.

The showiest church, the Baroque-scrolled Église St-François-de-Sales, stands in one of the most prominent locations in town, beside Annecy’s most famous bridge, the Pont Perrière, just a stone’s throw from the Palais de l’Isle. The church is dedicated to Annecy’s best-loved bishop, one of the most famous figures in the history of Savoie.

Back in the 16th century, this region spreading south from Lake Geneva had been rocked by the spread of Protestantism from its Swiss stronghold. The Catholic Church organised a major campaign to win back the populace in the 17th century; François de Sales proved one of its best, but most tender, weapons. De Sales knew how to tug at the heartstrings with his rhetoric and his writings, the latter becoming hugely popular across Europe. He also set up a charitable order here, and helped found the Académie Florimontane, encouraging the highest morals in Savoyard high culture – the city remains a vibrant cultural centre, open to all types of events nowadays.

Exploring Annecy’s exquisite streets, you’ll encounter further exceptional churches. Close to de Sales, St-Maurice may be a severe barn of a place, but stylish restaurants stand close by. Take glorious Rue Grenette and Rue Rousseau (Jean-Jacques escaped from Geneva to Annecy in the 18th century, to meet his great supporter and surrogate mother, Madame de Warens) for the cathedral. More spectacular still is Notre-Dame-de-Liesse, set on its own beautiful square, a gilded Virgin shining brightly above the facade.

Most of the historic centre lies north of the main branch of the Thiou river. But just south of it, Rue de l’Isle and Rue St-Anne form a fabulous curving route lined with popular restaurants and local ice-cream parlours, attracting swarms of tourists. Not so many climb the short but steep slope up to the castle, but those who do, will discover several museums, with sections devoted to local interiors, chocolate-box art, and, in a separate tower, the lake’s ecology.

The nearby Conservatoire d’Art et d’Histoire contains a further clutch of collections. There are more paintings, smooth sculptures by Annecy-born world-traveller Evariste Jonchère, and a delightful display on attempts to capture the moving image before the invention of cinema. I had great fun testing them out. Annecy in fact hosts a lot of movie events; today the city lies within the modern Rhône-Alpes region, its capital Lyon where the Lumière boys invented cinema for the world. If you and your children are taken with this display, also consider the interesting and educational contemporary scientific centre La Turbine, west along the Thiou from the centre.

Whether you look inside the churches and museums or not, strolling around sighing at the moving beauty of the canal-side streets will doubtless be one of your main pursuits in Annecy. The lake is the other romantic star of the show. Each time I’ve visited Annecy, I’ve enjoyed a peaceful lake-side promenade.

Ever environmentally aware, Annecy town cleaned up its act long ago. Its lake is recognised as one of the best-kept in Europe, so pure, you can happily go swimming in it when the weather warms up. Towards the south of town, you’ll find one beach, plus hugely popular outdoor pools. At the Thiou’s estuary into the lake, big cruisers line up to take you out on an unmissable tour on its waters. Then come the elegant public gardens, the waterside here packed with a host of small boats and pédalos for hire.

Cross the deliciously shaded Canal du Vassé, where lovely wooden boats are moored, to wander along the lake’s north shore, the extravaganza of the Impérial hotel drawing you to it and the further beaches at its feet, although you’ll be mesmerised as you look south, views opening up of the mountains encircling the lake. Even if it may be somewhat difficult to find yourselves alone in romantic Annecy, if you’re prepared to share your special moments with the crowds, then you can enjoy many blissful moments in one of France’s most enchanting cities.