The Many Charms of Montpellier 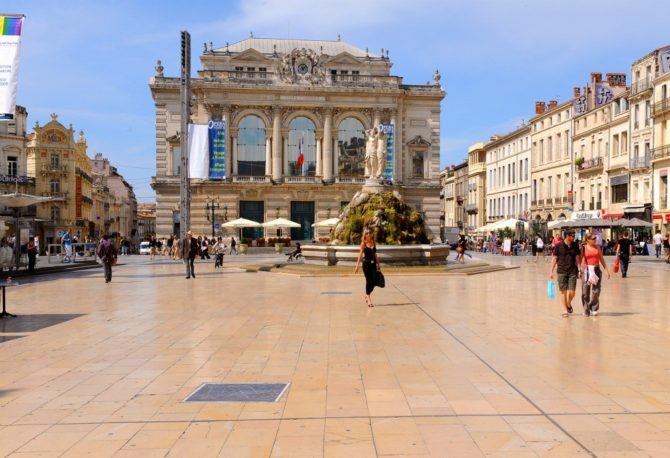 Having visited the southern city of Montpellier just briefly this summer, I find myself with an overwhelming urge to go back again very soon to see more of this marvelous university town, brimming with sophistication and charm.The capital of the Languedoc-Roussillon region, in fact Montpellier is one of the most visited cities in the south of France. Its location, less than four miles from the Mediterranean seacoast, means that it attracts a large number of both foreign and French tourists in the summer months. During the rest of the year it’s teeming with some 60,000 students attending its top-notch university, whose world-famous medical school predates the official founding of the university in 1289—both Nostradamus and Rabelais were medical students there in the 16th century. Wandering through the cobbled streets of the Old Town, and marveling at the plethora of exclusive boutiques and fashionable cafés, I was reminded of Oxford—in a sunny Mediterranean version.The large student contingent means that the city’s population of some 260,000 has an average age of just 25.

As well as being young and vibrant, Montpellier is also one of France’s fastest growing cities. Over the last few decades it has become a thriving center for high-tech industries, and international companies such as IBM and Dell have moved into the suburbs, bolstering the population of greater Montpellier and providing it with a substantial expatriate community.

The old city center is now pedestrian-only, and a great many residents do not use cars at all. Along with one of the most modern tramway systems in France, the city also has an excellent bus network and the forward-thinking Modul auto municipal rental car system—residents and visitors alike can rent a car for as little as an hour, with pickup and return points in neighborhood parking lots all across town.

Without the nuisance of cars, the city center is a labyrinth of winding streets full of wonderful shops, restaurants and bars extending from the 18th-century Place de la Comédie to the 17th-century Arc de Triomphe and the terraces of the Promenade du Peyrou, which was planned in 1688 as a setting for a monumental equestrian statue of Louis XIV. Not far from the Promenade, the Jardin des Plantes is the oldest botanical garden in France. It sits beside the medical school, installed in a former Benedictine monastery, founded in the 14th century and attached to the cathedral of Saint Pierre.

Aligned on either side of the Place de la Comédie, the city’s very active Opera House and the superb Musée Fabre form a link between the old quarters of the city to the west and the surprisingly audacious modern developments to the north and east—the massive commercial complex called the Corum and the Quartier Antigone, an immense, 100-acre ensemble of neoclassic buildings designed by the Catalan architect Ricardo Bofill.

Unsurprisingly, property in this delightful French city is not cheap. Prices have risen considerably in the last five years as more and more multinational companies have moved to the area. But the constant need for rentals, both for students and employees and managers relocating for work, means that the buy-to-rent opportunities in the city are among the best in the country.

According to the France Property Shop website, prices in 2010 were around €2,776 per square meter (one square meter equals 10.76 square feet), the highest in the Hérault department. But just as in every major city, the farther you go from the center the less you pay.

The best areas within the city proper are the quartiers of La Mosson, Montpellier Ouest and Montpellier Sud, where real estate agents say house hunters can find detached houses for around €300,000. For example, there is a bright and airy 14-square-meter studio in the city center, just a few minutes away from the Place de la Comédie, currently on the market for €51,000. A couple of miles away in La Mosson, there’s a four-bedroom house on the market for an asking price of €215,000.

Annelise Bosshard, owner of the agency AB Real Estate, suggests that an attractive alternative to paying city center prices is to look in some of the beautiful villages surrounding Montpellier, including Montferrier-sur-Lez, Saint-Clément-de-Rivière, Saint-Gély-du-Fesc and Grabels.

There are lots of apartments available in the central area, since Montpellier has such a large university population, says Bosshard,“but venture farther out, to the outlying villages, and you will find some beautiful houses in beautiful locations, with mountain and sea views. Many of the villages in which we have houses for sale are just a 10-to-15-minute drive from Montpellier,” she adds, “and transport links to the city are excellent.”

Montferrier-sur-Lez is a pretty village just north of the city, with plenty of amenities including good schools, supermarkets and acres of space. Here there is a two-bedroom “roof villa” with wonderful views over the surrounding countryside for €385,900.

In Grabels, five miles northwest of Montpellier, a buyer looking for easy maintenance can find a three-bedroom flat with use of a communal swimming pool on the market for €265,000.

Describing today’s market situation, Bosshard, whose agency specializes in high-end properties, says: “Sales are pretty steady at the moment, and most of our clients are foreigners, from everywhere. We have lots of interested Anglophone buyers, not necessarily from the UK but from Ireland and the US.

“Property prices are holding,” she adds. “Five years ago if you saw something you really liked you had to move very quickly, but now you can take your time. There are some great bargains to be had.”

Another location to consider is Lunel, about a 30-minute drive east of the city, says Wendy Johnson, who runs her business Moving to Montpellier from her home there. A colorful town of some 25,000 people, Lunel offers much of the charm of Montpellier without the stiff prices. It’s also just 12 minutes by train to the center of Montpellier, so it’s a great choice for people who need to commute to the financial center or to any of the high-tech companies.

The area around Lunel is sometimes called the Little Camargue, because of its proximity and similarity to the Camargue in the Rhône River delta, only a short distance to the east. A three-bedroom house in the Lunel suburbs is currently on the market for €260,000.

“My husband works in Montpellier,” says Johnson. “He cycles five minutes to the train station, then travels by train to city center. There are special hooks on the trains for the bikes, and a monthly pass including the tram only costs €68 a month.

“It’s great to be so near to Montpellier. The atmosphere in the city is buzzing, it has the most amazing tram system, and the weather is fantastic. We have lots of sun, but we are protected by the Cévennes Mountains in the north. The beaches are only about four miles away, the nearest skiing is about an hour and a half away, and Barcelona is just three hours by TGV.”