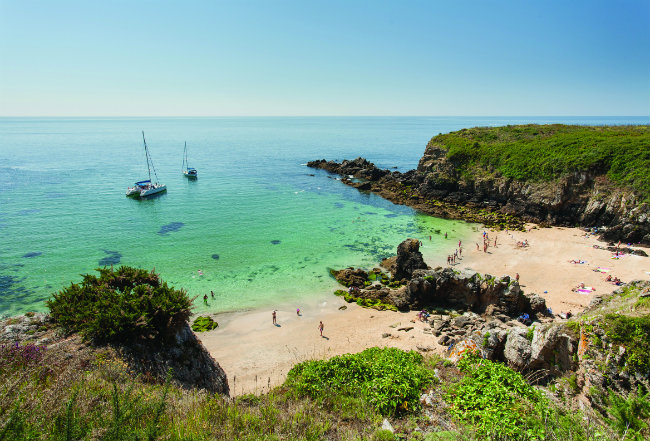 Even without taking its overseas territories into account, France has a number of interesting islands that are well worth venturing out to. Tristan Rutherford sets sail…

Imagine a graceful tree-lined alley planted in the middle of the Seine, just west of the Eiffel Tower. It’s a wonder that this artificial island isn’t more popular. Rather, since 1827, local ladies have used the 850-metre saunter as a swanky gossip spot. 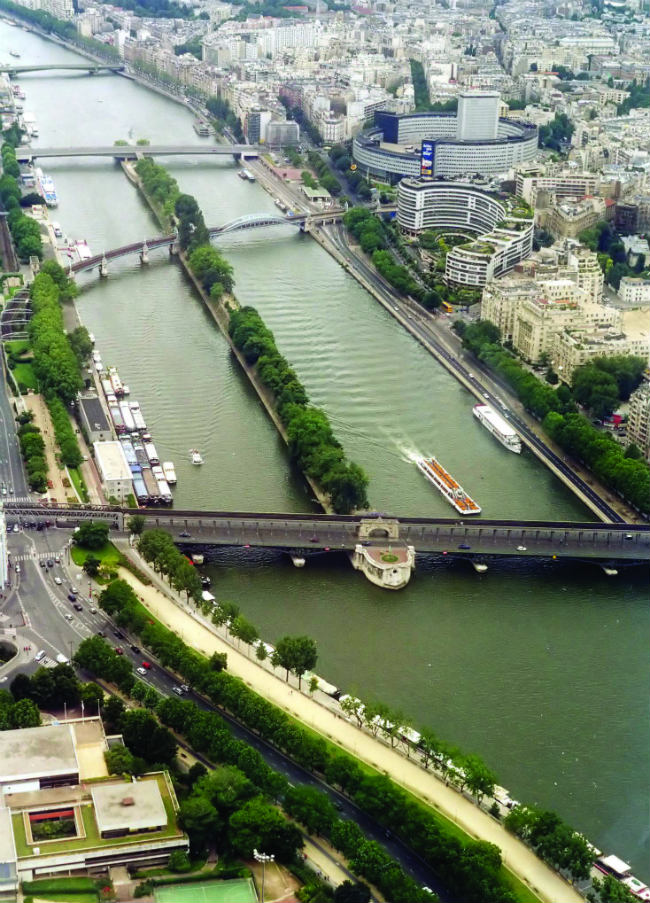 There’s a reason why Ouessant’s tourism website is French-only. It’s far removed from the 20th century, let alone the 21st. A ferry service links this lonely Breton island to the mainland by a gossamer thread – one that is stretched taut over treacherous rocks and a strong tide.

Indeed, the nation’s most westerly edge has been a maritime graveyard for a full millennium. Ouessant’s lighthouses are smashed by the boiling seas made famous by Jean Guichard’s whitewater photoscapes. Phare de la Jument rises from the Atlantic to blast three red flashes every 15 seconds. Phare du Creach lights up the sky from 120 kilometres away and purportedly boasts the most powerful lighthouse glow in the world. Each serves to keep sailors away – not to invite them in.

Perhaps that’s why those who do land on Ouessant are welcomed with open arms. The island’s only town, Lampaul, will serve you a captain’s feast of turbot rôti and crab salad, then tempt you with an ice-white beach. From here, 45 kilometres of trails pass by 400 bird species and the island’s tiny Ouessant sheep (a 50cm-tall mouton too cute for words). At island extremity Penn Arlan, a circle of standing stones stare out to sea – proof that visitors have used Ouessant as an escape since the Bronze Age. 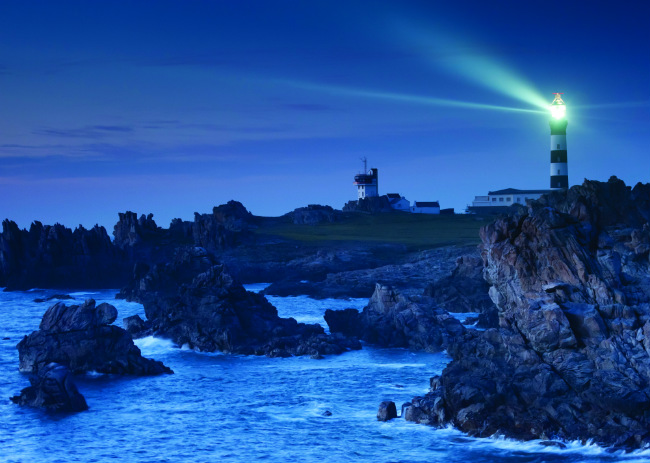 In 1687, the world’s then most celebrated prisoner was rendered to Île Sainte-Marguerite. The island may be a sub-tropical Elysium nurtured by a dizzying microclimate, but our inmate (thought to be King Louis XIV’s half-brother and rival heir) could only peek at paradise from the barred windows off the towering Fort Royal; a look-but-don’t-touch torture that must have driven him to distraction.

Over the intervening centuries, Sainte-Marguerite has been a microcosm of global goings-on. It was variously occupied by French and Spanish, plus Ottoman Turks and Nazi paratroopers. Circumnavigate the umbrella-pine-shaded perimeter – a 90-minute stroll – and you’ll bump into a dozen cannonball-making machines that date from Napoleon’s time. 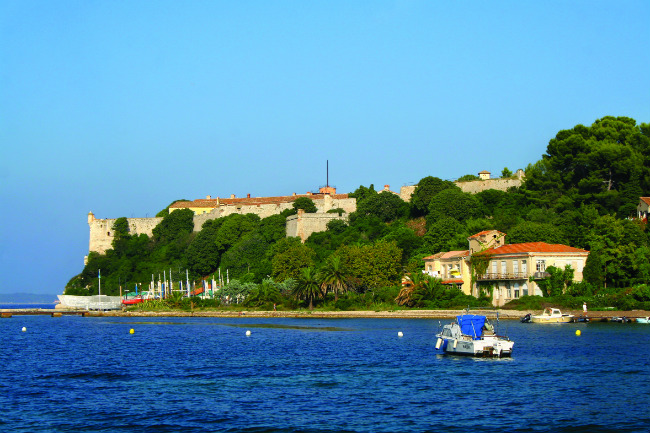 Since 1945, peace has reigned. Sainte-Marguerite’s far-out flora is managed by the Office National des Forêts. Scented pathways like the Allée des Eucalyptus and Allée des Myrtles criss-cross from coast to coast. Other forested sections are made up of an impenetrable scrub sourced over decades from places as far away as Australia, China and Brazil – and the island’s climate supports them all.

This being socialist France, only paupers are allowed to stay the night. After the last ferry departs from Cannes at 6pm, millionaires must skulk home to their Croisette hotels, while the lucky residents of the island’s International de Séjour youth hostel may lord it up like the Sun King himself.

Bobbing gracefully in the Atlantic near Saint-Nazaire, Yeu also does a fine line in megalithic dolmens and fabulous seafood. The Breton side is wild and rocky, while the Vendée-facing coast is duney and soft. 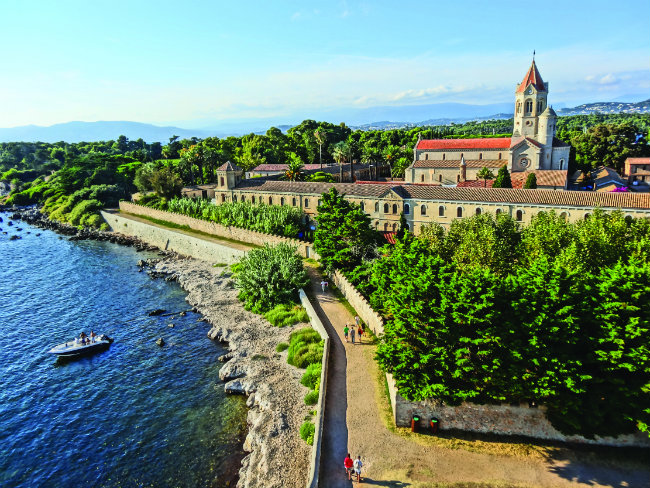 The smaller sister island to Sainte-Marguerite is a bottle’s lob away. Home to a silent order of Cistercian monks for 16 centuries, it’s also a favoured A-list escape. Not only do the monks produce fine wines, God’s writ prohibits them from talking to the press. 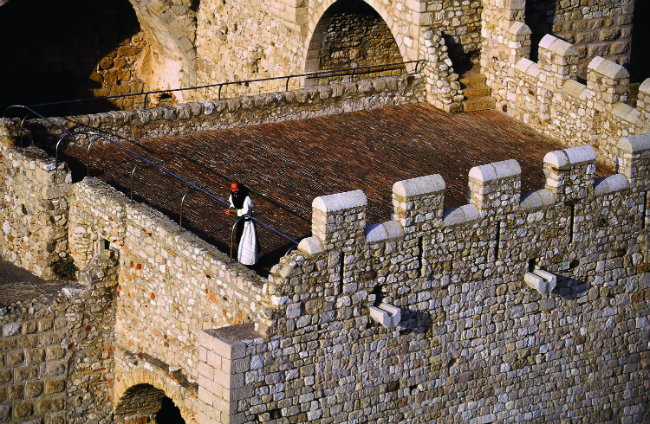 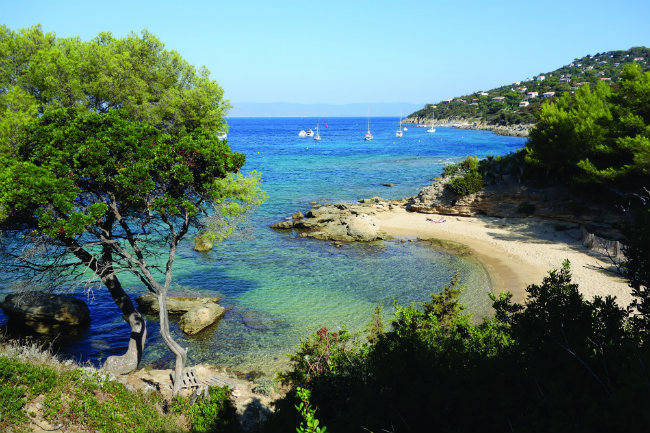 It’s the most curious island in the Mediterranean. This sun-soaked carpet of maquis has a remarkable ownership structure that could only exist in France. Levant belongs 90 per cent to the Direction Générale de l’Armement, and 10 per cent to an experimental nudist camp, a symbiotic relationship that keeps the French military down to earth, and the naturists protected by a daily dose of rocket tests.

First the bare-all bit. Back in 1931, doctors Gaston and André Durville established Héliopolis, an experimental village dedicated to naturism. Their dream was more nature than nudity, summed up by the mission statement: “a simple rustic city where sunlight lovers come in the quiet of beautiful nature”. The Durville’s philosophy pointed to naked swims and nature hikes, a far cry from the sauciness of France’s other major nudist site, Cap d’Agde. Health nuts, hippies, international alternatives and visiting actors (including Jean-Louis Barrault and Errol Flynn) pioneered a collaborative society that still thrives. 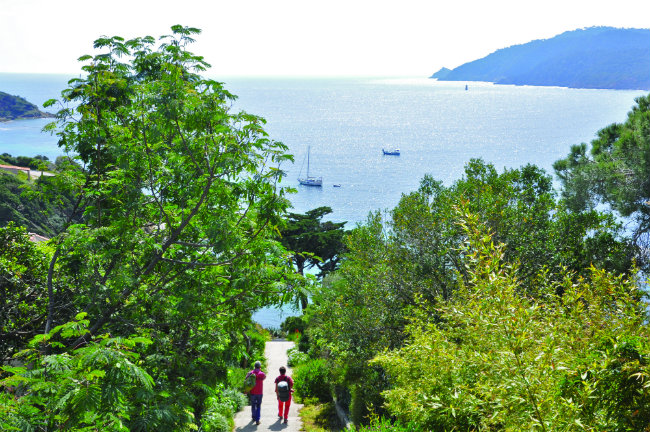 Héliopolis is still naturisme obligatoire. It now offers several apartments and three hotels, plus paddleboarding and yoga. Fishing is a major pull (as visiting boats are dispelled by the nearby military, the waters teem with marine life). This section of the island is best experienced with a nude hike through the 19-hectare Domaine des Arbousiers, a natural reserve perfumed with cistus, oleander and thyme.

And the 90 per cent? Local rumour has it that the pristine territory of the Centre d’Essais de Lancement de Missiles will be transformed into a National Park, along the lines of Port-Cros and the Calanques, in the coming years. Until then, overflights are still banned, unless you wish to land at nearby Toulon Airport with a missile up your Airbus. 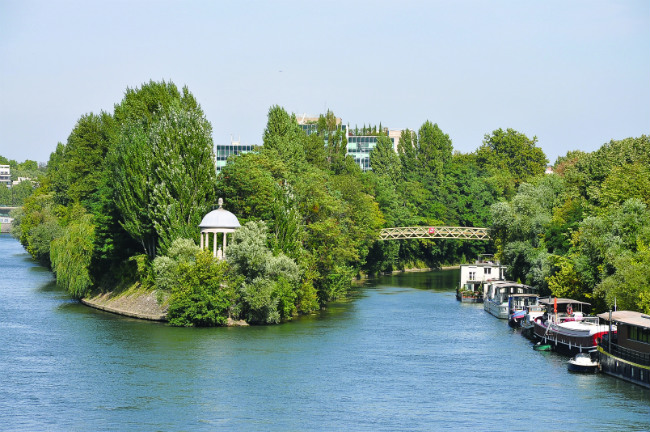 The Temple de l’Amour in Neuilly, on the southern end of Île de la Jatte 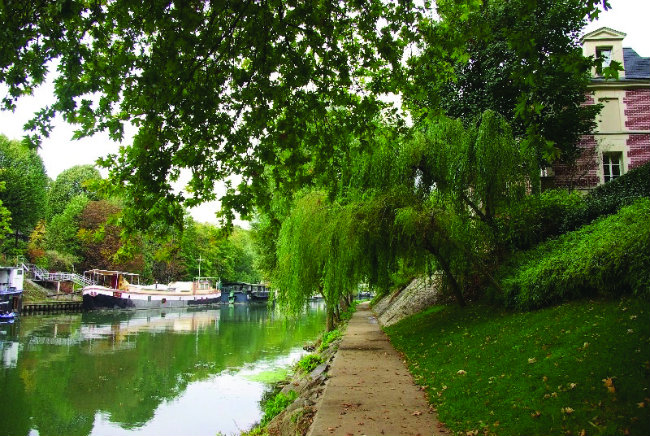 Then as now, Jatte hosts posh picnics, boat rides, Seine swims and ball games. Canoodling couples are ever popular – although in the 19th century the local bourgeoisie prowled for high-class hookers under the linden and birch trees. Such snooty scenes tempted other artists keen to capture the haut-monde. Notice boards dotted along the four-kilometre walking path that skirts the island detail who drew what where: Monet on the left tip, Sisley on the right shore, Van Gogh by the Neuilly bridge in the middle. 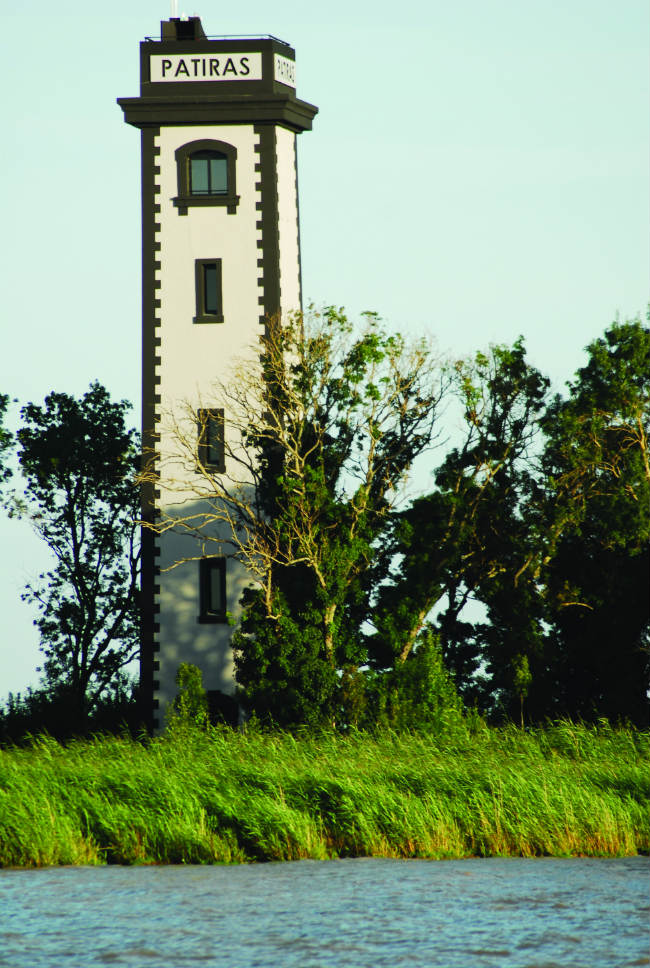 Opposite the ritzy domaines of Paulliac sits Patiras. Like Margaux, it’s a total one-off. A restored 150-year-old lighthouse is topped by a panoramic restaurant where all ingredients are locally sourced, including Gironde shrimp and Macau artichokes. Vineyards cover one side of the island; a reedy natural refuge the other. 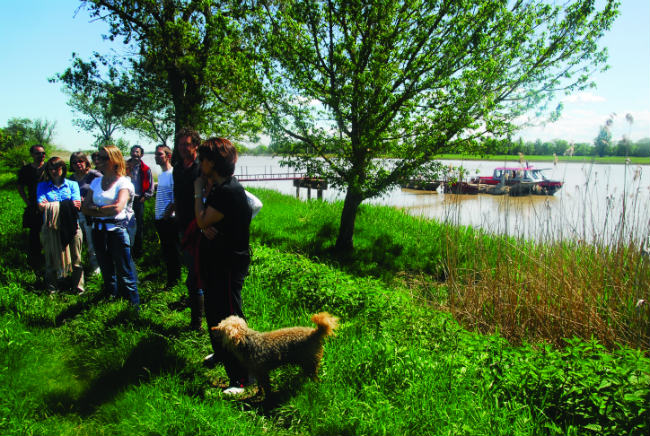 Bordeaux’s best kept secret is a true anomaly. French king Henry IV turned this Gironde riddle of sandbanks and marsh into a gravel-topped wine island. Although just 100 metres from shore, Margaux was shielded from the phylloxera virus that killed 90 per cent of Europe’s vines. Now morning mists, frost-free winters, clay soil and a salty Atlantic breeze lend the terroir a rare individualism. Wines produced by island vineyard Domaine de l’Île Margaux have bagged many an award.

Boat trips to the island are run by the vineyard manager’s son, Guillaume de Mecquenem, who of course grew up on Margaux. He would regularly kayak to school – or swim home in summer. The small jetty leads straight into the 14-hectare vineyard. Here, densely packed rows of Bordeaux varietals seem to cling to life against the rushing tide that speeds past like a silky brown conveyor. The only solid structure is the handsome manor house where guests may sample the distinctive vintage. All visitors are gifted a complimentary bottle of wine. 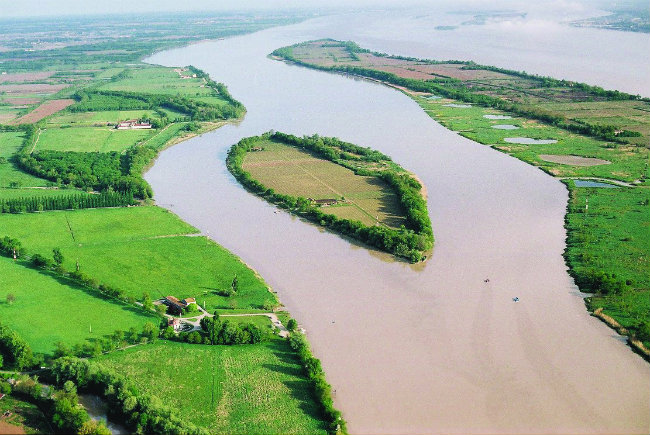 A sun-kissed speck near Marseille that shouts seclusion. A Roman quarantine island, then a French fort and a German battery, Ratonneau’s tranquil allure lies in its 300 types of fragrant flora and tiny, empty coves. 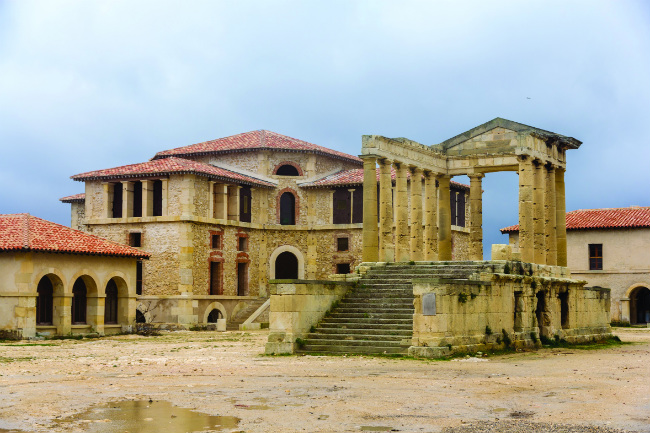 Île Sainte-Marguerite and Île Saint-Honorat are a mere hop away from Cannes. Some brave souls paddleboard across the Golfe de la Napoule, while the rest of us must board one of the hourly ferries from Trans Côte d’Azur or Transports Planaria.

The Vedettes Îles d’Or ferry to Île du Levant also calls at the paradise islands of Porquerolles and Port-Cros. Gulls escort the open-top ferry on the 40-minute journey out to sea. The service from Le Lavandou shrinks to one ferry per day or less in the depths of winter. Ratonneau is linked to Marseille by Frioul If Express. 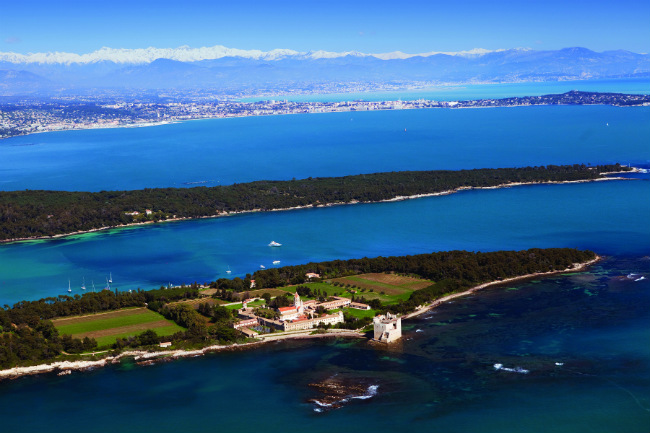 You’ll need a sturdy boat and a strong constitution to reach the Breton isles. From Brest, Penn Ar Bed sails across seas that vary from mirror calm to perilous. The Compagnie Vendéenne links the mainland with Île d’Yeu.

A cruise up the Garonde and Gironde to the islands of Margaux and Patiras is far more sedate. Guillaume de Mecquenem and his partners operate Silnet, a lighting fast cruiser from the Bordeaux River Cruise fleet moored on the city quay. 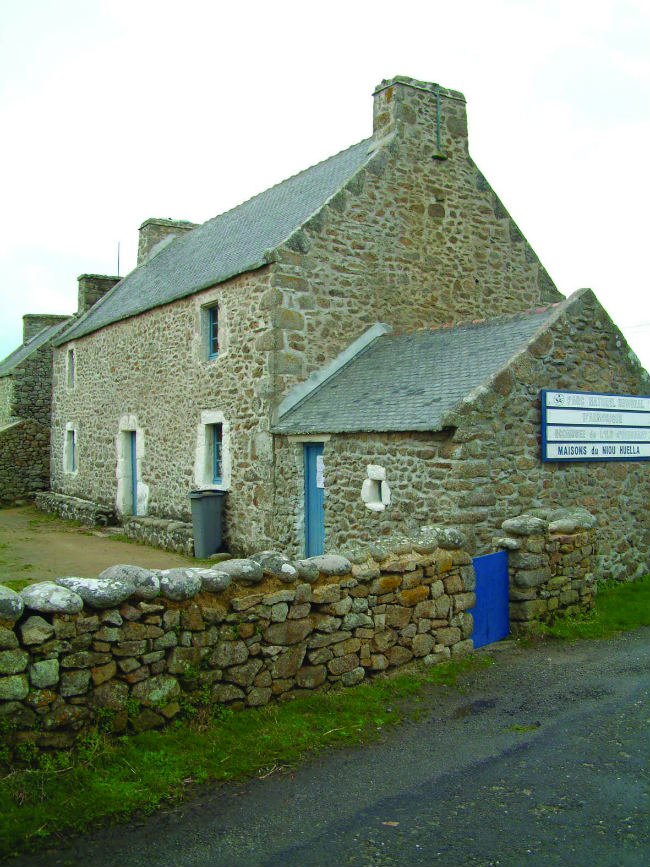 Previous Article The Reopening of the Franco-American Museum
Next Article Attention All Bike and Wine Lovers: Cruising and Cycling with Boat Bike Tours