Beauty and Bounty: On a Gastronomic Tour of Burgundy 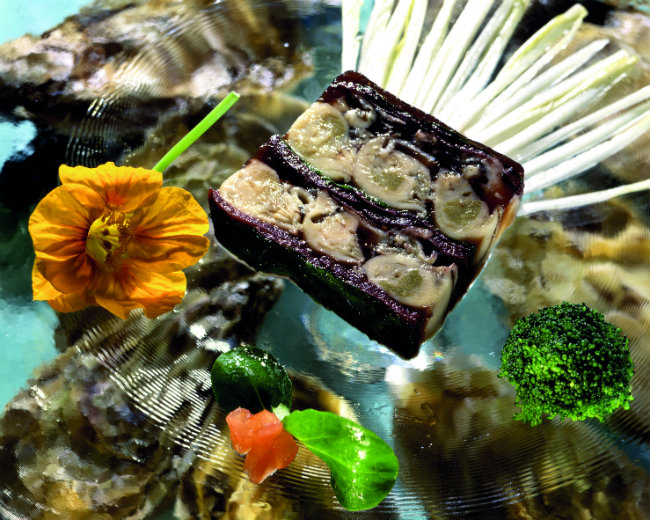 A happy combination of fecundity and fortuitous location has made this famous wine region a foodie’s paradise. Guy Hibbert inspects its tables…

The spring showers have fed the streams, lakes and canals; the snails are munching their way through deep, green valleys lush with new growth; and on sunny slopes the grapevines are sending new roots into the soils of their terroir. The sunshine has drawn out the first vine leaves and, with the worrying threat of frost now effectively over, the vineyard workers are starting to tidy and nurse the new season’s growth. 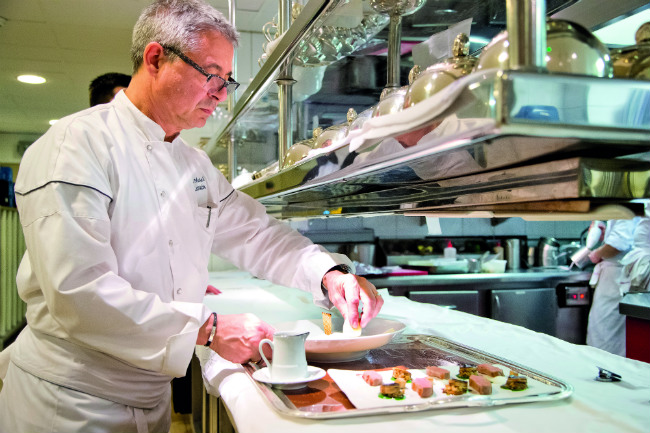 It is May and, with two public holidays falling in the same week, the French are going en vacances. On the A6 from Paris to Lyon, the Autoroute du Soleil, family cars are heading south. Vézelay, one of the Plus beaux villages de France, has opened its souvenir shops. Semur-en-Auxois is preparing for its annual fête médiévale. In Joigny, on the wide, silver currents of the Yonne, rental boats are casting off their moorings for a cruise down the river or the Canal de Bourgogne. In the hills and forest of the Parc naturel régional du Morvan craft shops are awaiting those in search of country pleasures. 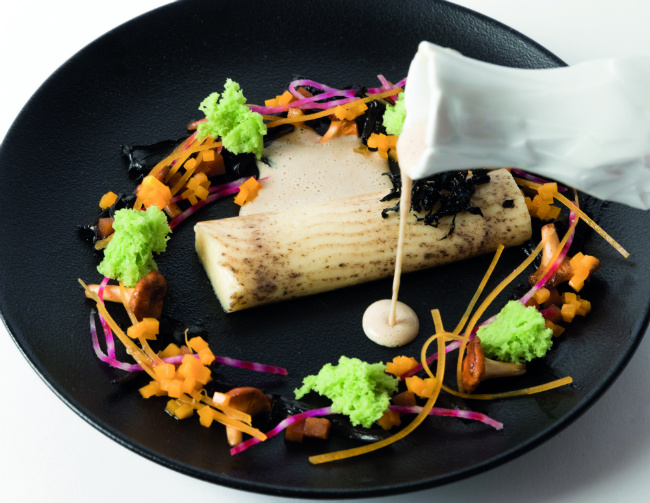 After an unusually damp and cool winter, the sun makes everyone happy. On the grassy quaysides of Auxerre young people are sitting in groups chatting and enjoying the warmth. On the wine routes, from Chablis in the north to the famous reds of the Hautes-Côtes de Nuits and Beaune, and down further south to Maconnais, visitors are arriving from all over the world to learn about the famous terroirs and climats and to educate their palates. What better time could there possibly be to go in search of memorable dining experiences in beautiful, bountiful Bourgogne? 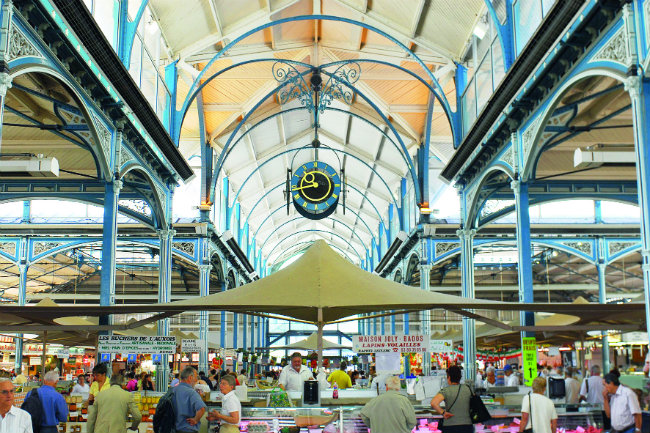 Burgundy might be best known for its wines, but the region’s green hills and valleys are also famous for much that doesn’t come from vineyards. The chefs of Burgundy are blessed with an abundance of excellent local produce to incorporate into their dishes, and any menu here, from modest prix-fixe to gourmet Michelin, is likely to feature the fruits of the region.

I always start with a Kir Royal – some fizz to perk you up and an extra kick from the 22% alcohol in the crème de cassis. The best crème is made from blackcurrants grown on the hills above the stellar wine villages of Chambertin, Volnay and Aloxe-Corton. And with your Kir Royal the ideal local canapé to have is a gougère, a lovely, fluffy confection made of choux pastry and cheese. You must try the snails too – not the petits gris, but the plump wild escargots de Bourgogne baked in garlic and parsley (though not harvested between April 1 and June 30). 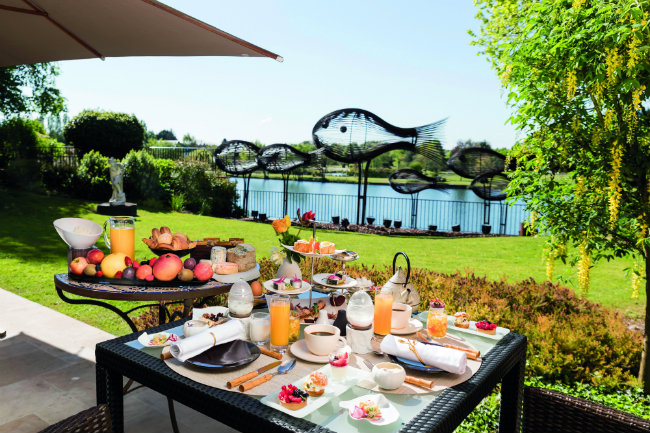 If you see some rather fetching, creamy white-horned cows grazing in the fields, the chances are they are the famous Charolais cattle, and there’s an even greater chance that if you order beef for your main plat it will be Charolais, perhaps cooked in a local Pinot Noir and adorned with mushrooms or truffles from the Morvan.

Chickens from Bresse are considered to be the best in the world – they even have an appellation d’origine contrôlée. They are served in elaborate creations at the top restaurants but there’s nothing to beat a plain roasted poulet de Bresse with garlic, with a spoonful of one of the many delightful varieties of Dijon mustard, such as the tarragon or even the cassis. 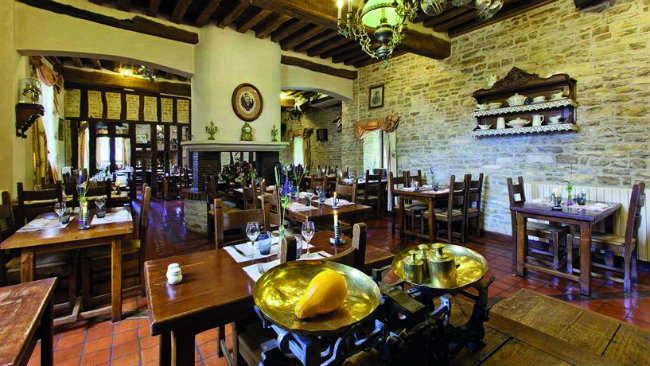 On your plateau de fromage the stand-out has to be the wonderfully creamy Époisses. Once you have had a croque-monsieur made with grilled Époisses on rustic bread you’ll never want the standard version again.

However, Burgundy’s gastronomic pedigree stems not only from its local produce but its location. Two Roman roads once met in Burgundy, at Cavillonum (Chalon-sur-Saône), and, some centuries later, coaching inns (relais) along the same route started servicing travellers with accommodation and hearty country fare. Then, as the age of the motor car arrived, bourgeois travellers – aided by Messieurs Michelin’s guidebooks – brought with them francs to spend and a more discerning palate. 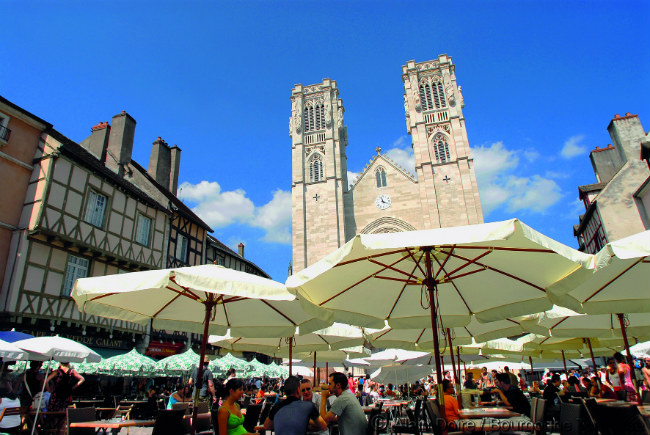 These days, modern voyageurs hurry down the Autoroute du Soleil, but the pre-autoroute road – once known as the Route nationale 6 – and its path through Burgundy is dotted with haute-cuisine restaurants. Auxerre has L’Aspérule, Le Jardin Gourmand and Le Bourgogne; further south, in the Parc naturel régional du Morvan, Saulieu is home to the two-Michelin-star Relais Bernard Loiseau; then it’s on to Chagny, where the three-star Maison Lameloise has been a shrine of gourmet dining for nearly a century.

Our tour began in Joigny, whose fine riverside houses are the legacy of centuries of loading barges with wine destined for Paris and beyond. Since road traffic replaced river traffic, the town has become best known as a launching point for riverboat rentals – and as the home of La Côte Saint-Jacques. 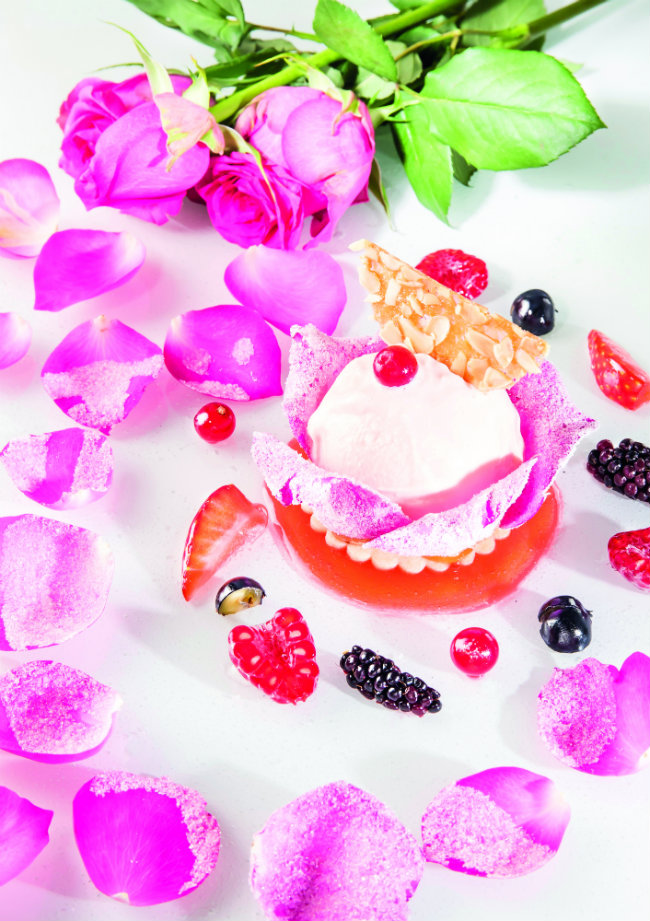 Today, this modestly named maison de famille is a Relais & Châteaux hotel with 28 charming rooms and a spa. Across the road sits the restaurant. Here, overlooking the river Yonne, chef Jean-Michel Lorain keeps up the high standards established by his grandparents, who turned a small inn serving local cuisine into a destination for gourmet diners. He was rewarded with three Michelin stars for the first time in 1986. If it’s warm enough, sit on the balcony for pre-dinner apéros and watch the river boats, then descend in the glitzy elevator to the elegant dining rooms to have your taste buds entertained. 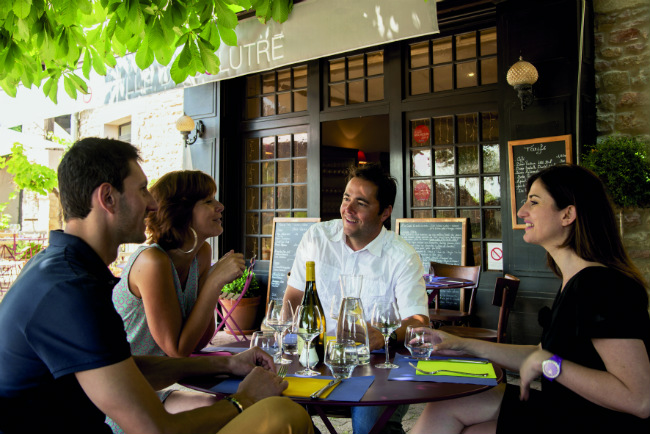 Great classics have been served here for many years, such as the Bresse chicken steamed in Champagne, the celebrated oyster terrine and the veal sweetbreads with ginger. We opted for the more contemporary entrée of fraîcheur de homard et vichyssoise d’asperges blanches; the main course of Quercy lamb served with wild and black garlic, mushrooms, morels and creamy mash was smoky, smooth and warming. 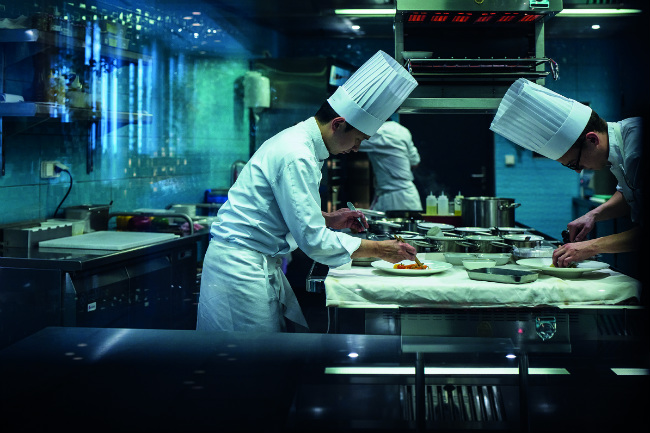 Since the tragic death by suicide of the super-talented celebrity chef Bernard Loiseau in 2003, his widow Dominique has forged ahead, building the Loiseau name into an internationally recognised symbol of culinary excellence, with restaurants in Dijon, Beaune, Paris and Saulieu. And it was in Saulieu that a former coaching inn became synonymous with haute cuisine thanks to the efforts of the legendary Alexandre Dumaine, who created one of the very first Michelin three-star eateries here between the 1930s and 1960s. In 1975 Bernard Loiseau took the reins at La Côte d’Or, and his fierce determination and unrelenting standards yielded the coveted three stars in 1991. By the time of his death he was an international celebrity, perhaps the first chef to attain media super-stardom. 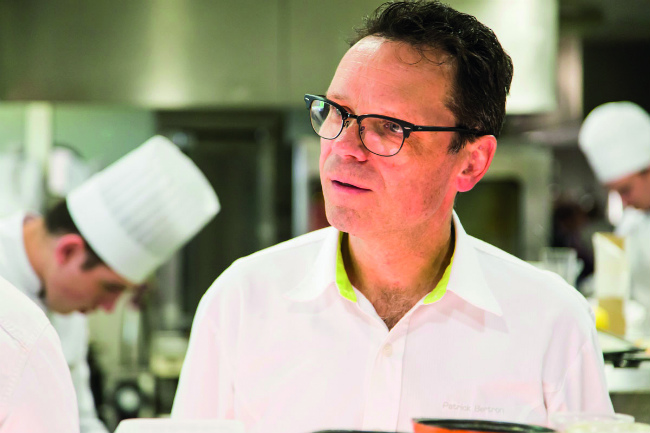 Fifteen years on, we were delighted to sample the Relais Bernard Loiseau’s Nationale 6 lunchtime menu– the handiwork of chef extraordinaire Patrick Bertron. His creative air is evident here, yet those in search of the classic Bernard Loiseau dishes won’t be disappointed; a section of the menu is devoted to his eternally popular plats such as Jambonnettes de grenouilles à la purée d’ail et au jus de persil.

Our tour didn’t allow time to visit the three-Michelin-star kitchen of Éric Pras at Maison Lameloise. There, in an old coach house that’s been in the same family for three generations, you’ll find a Relais & Châteaux hotel and a world-famous restaurant.

But for purists there’s only one place to go: La Beursaudière in Nitry. On a warm evening this charming old auberge with beamed ceilings and waiters in traditional costume was packed with locals and holidaymakers en route south – as you might well expect it to be. 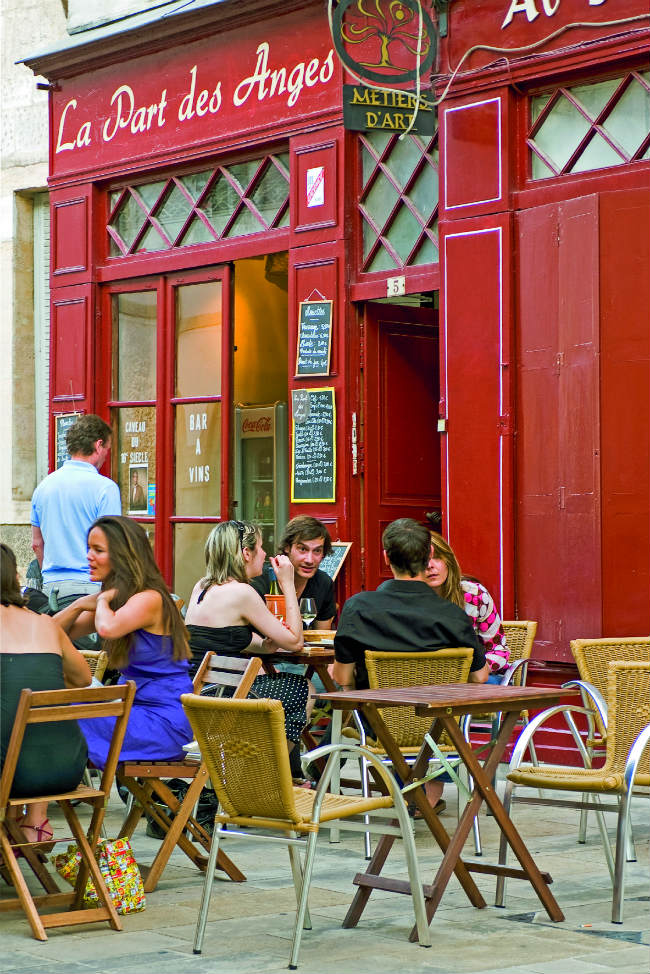 With a booming international wine tourism, Burgundy is always high up on the bucket list of vin lovers and connoisseurs, so it’s not surprising to find good eating in any of the great wine appellation villages. What is surprising is the Japanese influence that’s emerging here.

With growing numbers of Japanese expats living in Dijon and Beaune as winemakers and négociants, it was only a matter of time before their influence was felt on the menus of Burgundian restaurants. 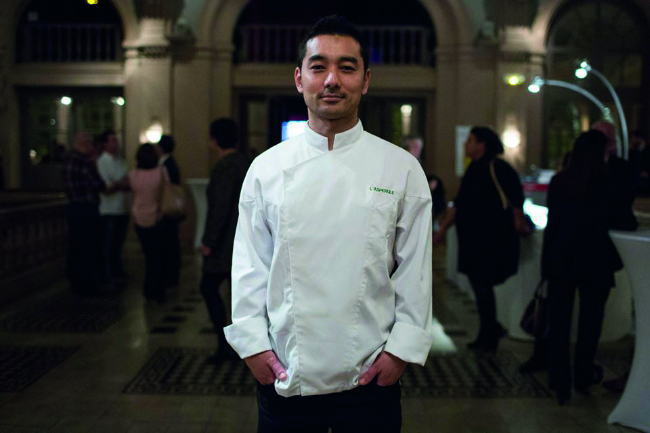 In Auxerre, Keigo Kimura was awarded a Michelin star for his fresh approach to classic dining at L’Aspérule. In Beaune, Seiichi Hirobe at La Lune is getting rave reviews for his fusion dishes. Chablis’s top table, Au Fil du Zinc, has a new spin-off, Les Trois Bourgeons, where Japanese chefs are bringing flavour innovations and clever interpretations of local classics.

In Semur-en-Auxois, at La Fontaignotte, one-time French movie producer Charles Gassot has carried out a remarkable renovation on a graceful townhouse in the heart of the medieval city, and brought in a young chef to literally spice up the menu with an Asian twist on classic staples. 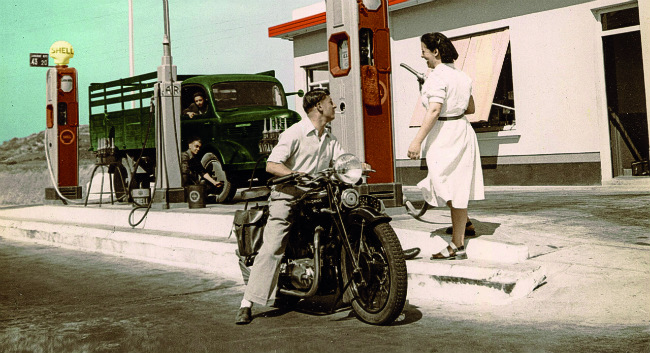 The Nationale 6 and the Nationale 7 have legendary status for a generation of French holidaymakers who first set off in search of sunshine on their August holidays in the ’50s, ’60s and ’70s. Vintage Belair’s retro tourism– camping, vintage car rallies and themed excursions – celebrates the Trente Glorieuses. www.vintagebelair.com

Previous Article Great Destinations: Midi-Pyrénées, Lighting the Way
Next Article 12 Things to See on the Coast of La Manche