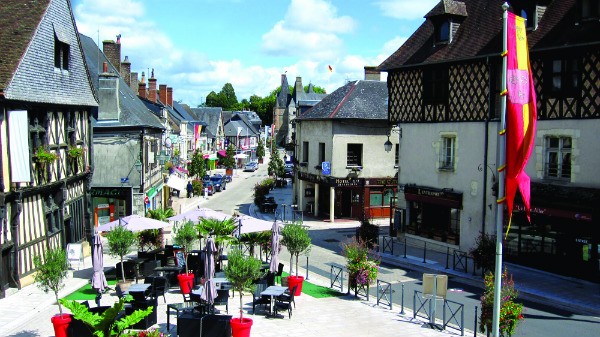 Aubigny-sur-Nère is a delightful town with 5,900 inhabitants on the Route Jacques Coeur, which takes in the Châteaux of Culan, Ainay-le-Vieil and Meillant, amid the étangs (lakes) of Sologne and the hills of Sancerre. All around are forests, meadows and vales: a symphony of nature. This charming town is well worth a detour for its half-timbered Renaissance facades, Gothic church, castle – which was extended in the 17th century – and the La Nère River that runs through it.

Sited in the historic province of Berry, which is now in the Cher département of the Centre-Val de Loire region, Aubigny-sur-Nère is proud of its Franco-Scottish heritage as the ‘City of the Stuarts’. In 1423, in the name of the Franco-Scottish ‘Auld Alliance’, King Charles VII of France awarded Sir John Stuart of Darnley, a Constable of the Scottish army, the town and its surrounding lands, in thanks for his services against the English during the Hundred Years War.

Aubigny-sur-Nère then remained under Scottish control for two and half centuries and the Stuart dynasty left a lasting mark. John Stuart’s grandson, Bernard the 4th Lord of Aubigny, was called Béraud by the French and nicknamed the “knight beyond reproach”, as was his Gallic compatriot in battle, the Chevalier Bayard. Bernard’s cousin, Robert Stuart, who fought in the Italian Wars (1494-1559), was awarded the baton of Marshall of France. He made improvements to both Aubigny Castle and the Château de la Verrerie, which were part of his fiefdom, and when a terrible fire broke out in 1512, he helped the town’s inhabitants to rebuild with timber from his forests.

Today, many of the town’s outstanding surviving facades date from this reconstruction, including several preserved by the layers of ‘roughcast’ with which they were covered.

The very last Stuart died in 1672, without an heir, and Aubigny was returned to the French crown, but not for long. Louis XIV transferred the Duchy-Peerage to Louise de Kéroualle, the Duchess of Portsmouth and a favourite of the King of England, Charles II, with whom she had a son. The beautiful Louise had arranged England’s neutrality during the Franco-Flemish War and so it was a double irony that the ‘City of the Stuarts’ now belonged to an English family!

Louise was hated in London and adored in Aubigny. Pious and charitable, she devoted herself to the town’s inhabitants and extended the castle – the present-day Hôtel de Ville – and its park, which is currently named the Parc de la Duchesse de Portsmouth in her honour and is said to have been designed by André Le Notre. Upon her death in 1734, the Duchy was transferred to her grandson, Charles Lennox II, the Duke of Richmond.

The Richmond family was ‘more London than Berry’ and this contributed to their property being seized in 1792, during the French Revolution, although it was returned in 1803, following the signing of the Treaty of Amiens. Plagued by court battles and fraternal squabbles, the 5th Duke put everything up for sale in 1840, and the Château de la Verrerie was bought by the Vogüe family, its present owners.

Today, Aubigny’s approach to its Scottish heritage is touched by humour – a giant statue of a Scotsman who could almost be from the film Braveheart stands on the edge of the town, which boasts a traditional British red telephone box and a nursery called Kilts et Culottes. Meanwhile, The Aubigny Auld Alliance Pipe Band features the town’s notaire, local police adjutant, a chef and several young ladies, all of whom learned to play the bagpipes from Ketty, a Scottish student on a language study holiday who ended up marrying one of her pupils, a fireman named Alban. The Pipe Band have even been invited to play Brittany’s prestigious Festival Interceltique de Lorient, where Celtic music is taken very seriously, indeed!

In terms of cuisine, The Cutty Sark pub – which boasts mahogany woodwork and tartan carpets – serves haggis, the kitchen of the Town Twinning Committee’s Christiane Morice produces fudge and ‘The Aubigny Auld Alliance’, a 12-year-old pure malt whisky, is sold by local shops.

Some 130 “highly motivated” volunteers organise the annual Fêtes Franco-Écossaises (Franco-Scottish Festival), which attracts around 20,000 visitors. “This summer’s event, from July 10-12, will be of particular importance”, explains Martine Mallet, the Deputy Mayor in charge of Culture. “We’re celebrating the 50th anniversary of our twinning with the Scottish town of Haddington.” This year’s programme will feature a procession of 200 pipers, medieval markets, Highland games, feasts and concerts.

The sight of people in kilts on the town’s Rue du Prieuré and Rue du Charbon is pleasingly surreal. During the festivities, all the officials – including the mayor, Michel Autissierare – dress in kilts made from the Aubigny tartan (green, yellow, red and blue) by Lady Chrystel Kilts.

That’s the kilt-making business run by Lyon-born Chrystel Amyot who, along with her Québécois husband Robert – a bagpipe player and a descendent of the MacKinnon clan – and their two daughters, recently moved near Aubigny as “in the same way as an instrument maker” she wanted to be “close to her clientele”. Her haute couture kilts are sold around the world and she’s developed a much admired pleating method.

She says the town’s citizens are “proud of their roots” and that they’ve “two loves”, explaining, “Scottish school kids and families are regularly welcomed here, and the inhabitants of Aubigny are very familiar with the beauty of the Royal Mile and the Highlands.

Via the A10 autoroute, Aubigny-sur- Nère is just over 200km from Paris.

Maison Saint Jean: This superbly restored 16th-century inn is now a charming and comfortable guesthouse run by Emmanuel and Martine Mallet. It’s carriage entrance provides access to a courtyard garden where breakfast can be taken. The rooms feature tall fireplaces and period furniture.

Les Châtelains: An estate with a massive pyramidal barn offering five bedrooms, including two suites, situated between Sologne and Sancerre. Gorgeous parkland, a heated pool, delicious breakfasts and, with prior notice,table d’hôtes.

Le Bien Aller: Jean Achard’s bistrot is always packed, thanks to its relaxed atmosphere and such delicious dishes as creamy lentils with smoked duck breast. Jazz sessions each Friday evening.

Castle of La Chapelle d’Angillon: An imposing 11th-century fortress which was the residence of the lords of the tiny, tax-exempt sovereign state of Boisbelle.

Musée de la Sorcellerie: An amazing multimedia retelling of the many legends of the Berry province.

In the town of Presly, about 13km from Aubigny, are two antique dealers well worth visiting. Just opposite the church, Rodolphe Manda has eastern earthenware and 18th-century cabinets, while his neighbour Serge Jacquemin cheerfully vends Louis XIII hosiery and Art Deco chandeliers.