Beaulieu-sur-Mer: A Secret Hideaway on the Riviera 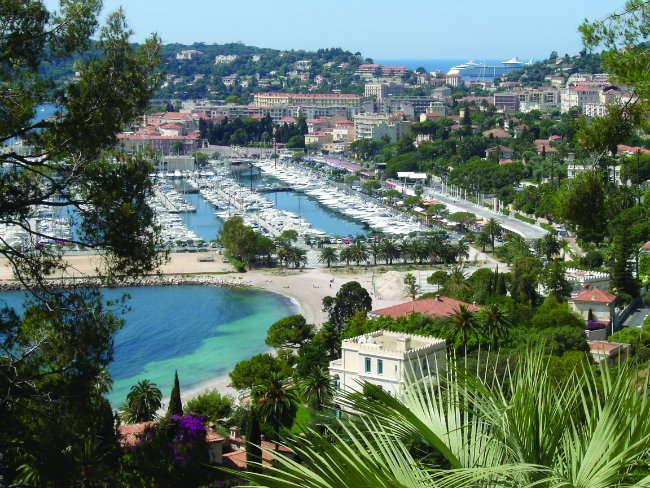 “They dined at the new Beach Casino at Monte Carlo… much later they swam in Beaulieu in a roofless cavern of white moonlight formed by a circlet of pale boulders about a cup of phosphorescent water, facing Monaco and the blur of Menton.”

“Drove to Beaulieu,” Queen Victoria noted in her journal on May 1, 1899. “Alas,” she then added, “my last charming drive in this paradise of nature, which I grieve to leave, as I get more attached to it every year.”

The Queen definitely had a point. I’ve been living in Beaulieu-sur-Mer for the past six years and feel the same glowing affection for this miniature coastal town wedged between Villefranche-sur-Mer and Èze. And even if the most splendiferous Riviera paradise is bound to lose its lustre over a century later, Beaulieu’s timeless, quiet glamour still reigns.

These days, more than ever, there’s a surge of innovative energy in this lovely, laid-back one-horse town that has somehow escaped commercial over-development. With over 200 shops and businesses – clothes boutiques, furniture stores, galleries, gourmet grocers, florists, cafés, and restaurants – it’s a small miracle that Beaulieu’s bling factor is so low. Call it refreshingly untrendy. You won’t find big label designer shops like in Saint-Tropez or cutesy, industrial-made souvenirs. If you crave lavender soap, the Saturday morning Provençal market sells the real thing. 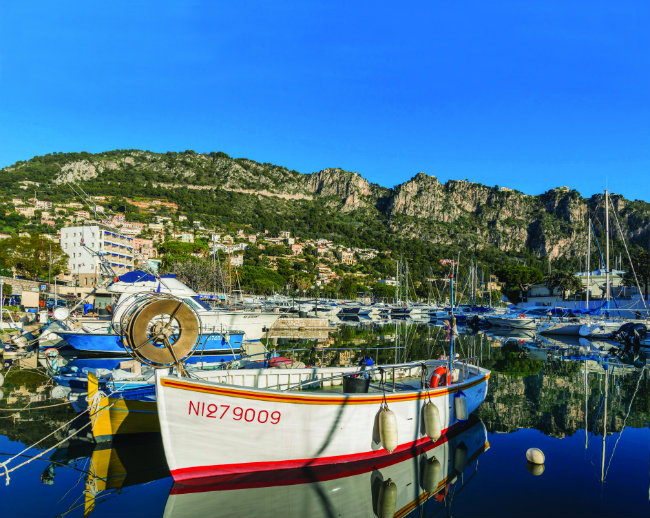 The harbor in Beaulieu-sur-Mer

One of the tiniest villages in France – a minuscule 0.95 square kilometres – Beaulieu-sur-Mer is nestled in a curve protected by tall, grey slabs of the rocky foothills. The town became independent from Villefranche-sur-Mer in 1891, which was when the term Berlugan (from Beaulieu) was coined.

The seafront gardens are ablaze with brightly coloured flowers and shaded by tall, thin, graceful palms. As you wander round, you’ll see ancient magnolia trees with an impressive tangle of gnarled roots, wind-swept parasol pines, exotic flowering succulents, giant rubber trees, cypresses and violet bougainvillea. The crisscross of three main streets is all lined with citrus trees, sagging with ripe fruit. As a former New Yorker, I still marvel that no one strips them bare. Crime is pretty much nonexistent – the biggest danger in this tranquil town is the possibility of slipping on a fallen squashed bitter orange.

Across from the Mediterranean, there’s a sprawling grassy park with a century-old olive grove where summer concerts are held. At the eastern edge of town, next to the yacht-clogged little port and a row of restaurants, is another hot spot, La Petite Afrique – Beaulieu’s mini-stretch of coast and a palm-shaded beach – which boasts a microclimate several degrees warmer than its neighbours. According to local lore, it was here that the first banana tree was planted in Europe. 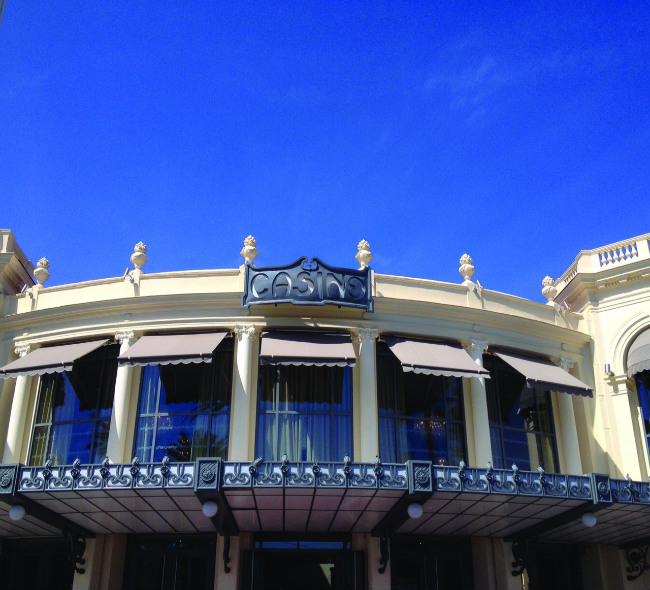 But that’s only part of the draw. Beaulieu’s unique jewel-box vibe comes from its dazzling, ornate Belle Époque architecture. Gaze upwards in about any direction and you’re bound to spot a postcard-perfect white villa decked out with curvy turquoise balustrades and ceramic friezes.

This is no coincidence. Ever since the 1880s, when the Calais-Mediterranean Express and luxurious Wagons-Lits connected Nice with Europe, Beaulieu became one of the most favoured destinations for European crowned heads and aristocrats. The most notorious was Leopold II, King of the Belgians, who bought up an enormous chunk of land in the wooded hills overlooking the bay of Villefranche – now known as the celebrated Villa Leopolda estate, whose colourful history includes a failed attempt by a Russian oligarch to acquire the villa for £392 million in 2008. Back in 1898, there were no fewer than 82 hotels in Beaulieu. Today, a handful of those elegant winter palaces – The Hôtel des Anglais and Le Bristol – are still standing and have since been divided into residential apartments. 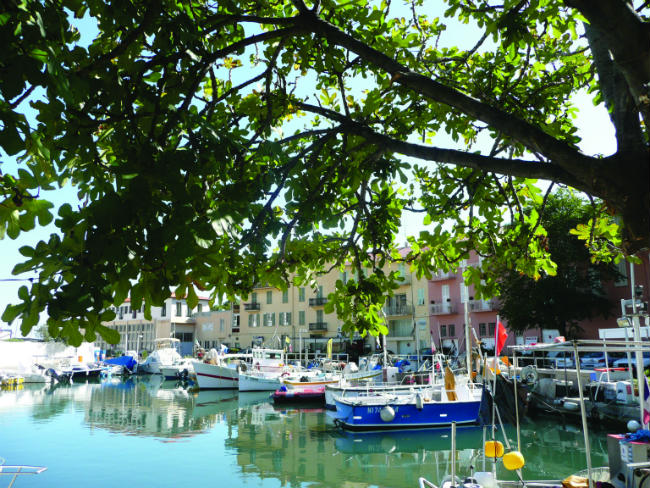 In 1896, Beaulieu also became the winter home of Gustave Eiffel, who left his mark on the village. He designed both the seafront Casino – recently restored to its former glory – and the angel-adorned stucco wedding-cake Rotonde, now used for private receptions. When he wasn’t organising fencing or horseback-riding matches, the famed architectural engineer – who was also a meteorologist – conducted experiments on the climate in his villa, proving that Beaulieu’s winter temperatures were consistently seven degrees higher than in Paris.

As the years passed, Eiffel gradually transformed his on-the-sea property to match his own tastes, adding vaulted arches, elaborate wood inlays, Doric columns and Florentine-style statues. Rumour has it that a Scottish entrepreneur who is already in the process of restoring the long-abandoned landmark hotel, Le Metropole, has bought Eiffel’s villa, which is right next door.

Another distinguished local resident was Lord Salisbury, Prime Minister to Queen Victoria, who sought out the gentle Riviera climate for his health. After a stay in Monte Carlo, where he was refused entry into the Casino because he’d forgotten his passport (“You see, I’m the man who issues them,” he reportedly explained to the doorman), Salisbury bought a plot of land and built La Bastide in 1889, a red-shuttered 10-bedroom stone mansion hidden away in a forest of olive, oak and cypress trees.

Though Lord Salisbury’s holiday home was technically on the borderline of Villefranche, the respected statesman – an eccentric dresser with a massive beard – was most often seen pedalling down the hill to Beaulieu on his tricycle with his wife, as a servant trailed behind him in case of difficulty. 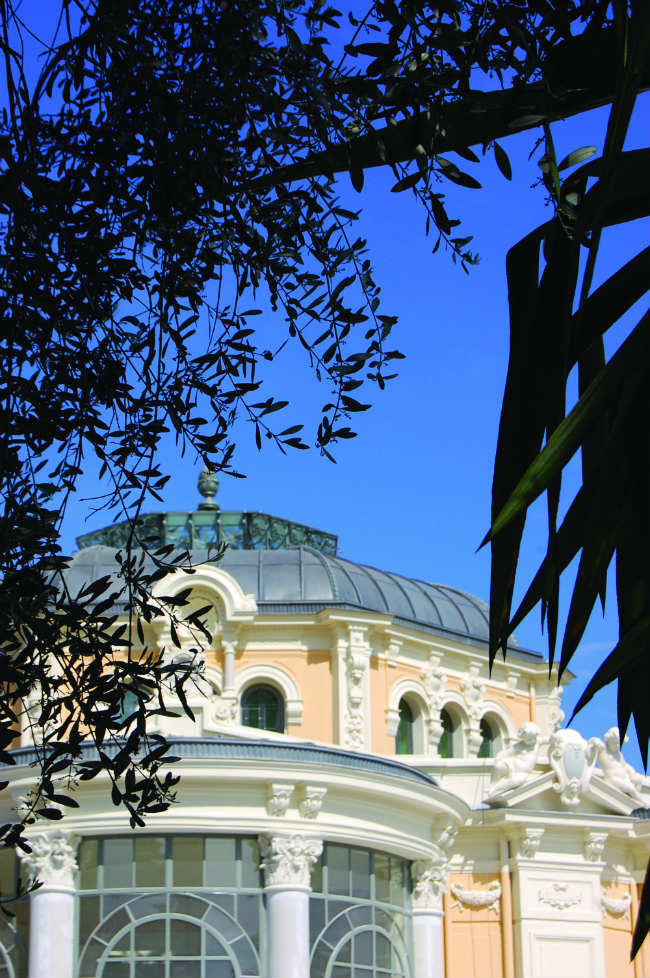 Beaulieu’s ever-present, large British community still frequents the turn-of-the-century St Michael’s Anglican Church. Others hang out at the Gran Caffè sipping cappuccino as they page through the Financial Times. Come July, when the population triples in size, you’ll hear a lot of posh-accented Londoners who breeze through Super U, heaping their carts with cases of Whispering Angel rosé. Typically, our local supermarket caters to its foreign clients, with plenty of sharp cheddar cheese, porridge, oat cakes, Indian curry sauces. Want a jar of lemon curd? Try Beaulieu.

All year round, the real hub of activity in Beaulieu is the main square, Place Marinoni, named after the town’s first mayor, a formidable inventor and local entrepreneur who, after 29 days in office, decided to resign from politics. The square is a multi-function rendezvous spot, bordered by towering plane and olive trees strung with festive little lamps. At the centre is an old-fashioned, grey-green, wrought-iron kiosque where bands occasionally play music; in the summer, out comes a stage for live groups and weekly balls and fireworks. The year-round daily morning produce market on the square is outstanding, shared by two rival marchands de légumes. I tend to drift toward Stéphane, a grizzled, gregarious charmer who sells ultra-fresh mesclun, heirloom tomatoes, mauve Italian eggplants, cartons of fat blueberries and delicious tapenade and olive oil imported from Ventimiglia, just over the Italian border. 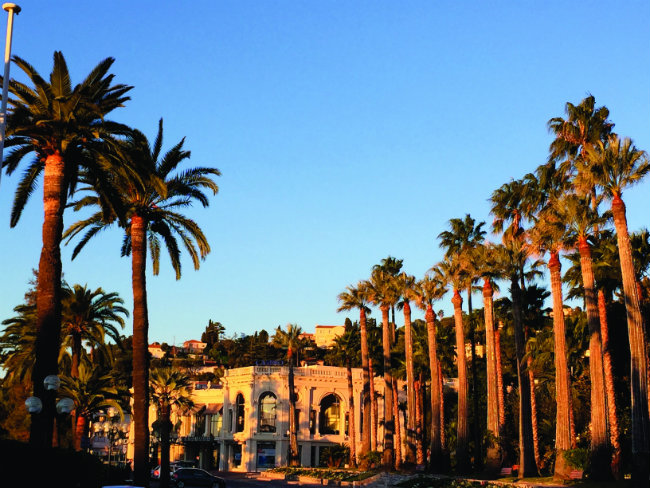 The seafront near the casino. Photo: Michel Redolfi

It is rare to encounter traffic jams in Beaulieu, but I recently found myself in a terrible tie-up on the two-lane street that leads out of town. I opened my car door and craned my neck to see what the problem was. The municipal gardeners were unhurriedly laying beds of flowers to brighten up the aisle of the traffic divider. No one honked. After about ten long minutes, a Berlugan gendarme waved us forward with a friendly smile. Riviera life at its most genteel. 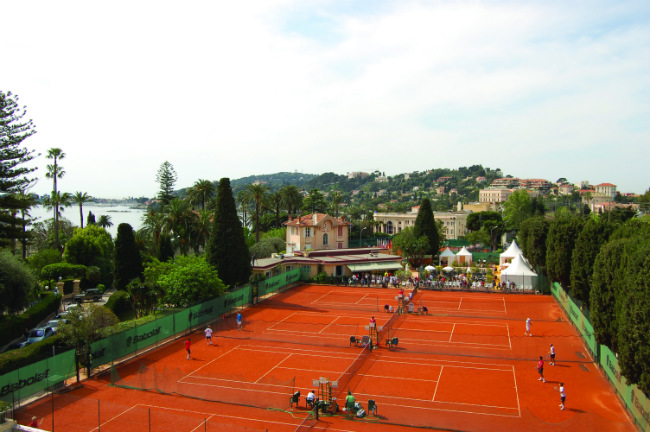 What to See and Do: The best of Beaulieu-sur-Mer, from the very old to the absolutely up to date

Guided Tours: In the Footsteps of the Belle Époque/Botanical Walks

Book a place with the tourist office to experience ‘In The Footsteps of the Belle Époque’, a guided tour of Beaulieu’s most beautiful architecture, or try one of the Botanical Walks, which include a glimpse of rare exotic species from the five continents. For more information go to the local Tourist Office website, which has lots of other important information for tourists and visitors too.

The impressive, white Villa Kerylos, near Gustave Eiffel’s former residence, is a not-to-be-missed museum on the water’s edge, near the Baie des Fourmis beach. It was built at the turn of the 20th century by the grecophile and archaeologist Théodore Reinach, and is a faithful rendition of a rich Athenian house from the 5th century BC, with everything from yellow and pink sunken marble bathrooms to a mix of original and reproductions of artefacts, furniture, frescoes, statues, and mosaics.

The brand new Berlugan history museum has a fascinating collection of vintage photos (check out Lord Salisbury having tea in front of La Bastide), Roman coins and ceramics, and a prehistoric skeleton. Best of all: rare memorabilia from another notorious resident, the flamboyantly wacky James Gordon Bennett Jr, American editor of the Paris Herald, who was a generous Beaulieu benefactor. His Namouna Cottage, later bought by perfumer François Coty, still stands today. You’ll also catch a glimpse of photos of other famed regulars, including Jeanne Lanvin, Isadora Duncan and Igor Stravinsky, who wrote Petrouchka in Beaulieu.

The Cinéma de Beaulieu, adjacent to the Casino, is a hi-tech theatre featuring a great international selection of films in their original version.

The Beaulieu Tennis Club is a lovely outdoor complex of red clay courts near the Baie des Fourmis. It offers day rates to visitors. 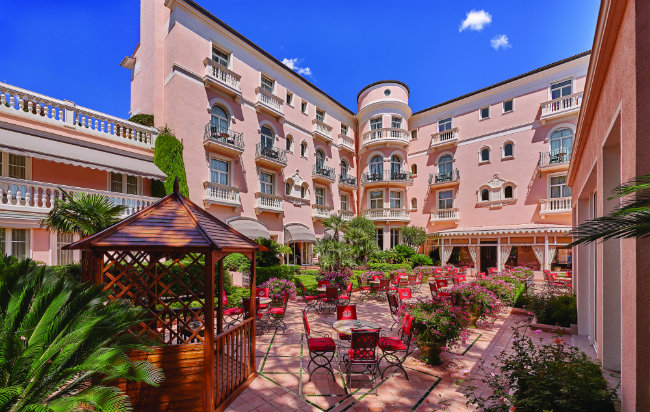 Ever since talented Michelin-starred chef Yannick Franques took the helm at the Restaurant des Rois, at Beaulieu’s historic elegant landmark pink hotel La Réserve (think Rita Hayworth, Clark Gable and Gregory Peck in its heyday), the culinary scene has been shining brighter than ever. But now that their new affordable informal sleek bistro, La Table de la Réserve has hit town, locals can’t get enough of the exquisite market-fresh dishes. From an open-plan kitchen, watch newly arrived chef Anne-Sophie Sabini dish up everything from mini pizzas and gnocchi to fish stew and roast chicken. Don’t miss the featherlight îles flottantes for dessert.

Across from the row of yachts, Marcello dishes up delicious, ultra-fresh Italian appetizers and features a prize-winning Lambrusco. Coming this summer: another new bistro from the owners of African Queen (where the likes of Bono and Jack Nicholson are often spotted), featuring family-style regional cuisine.

For a front row seat for sea-gazing, try this outdoor, classic Provençal restaurant at the new Berlugan Beach (it’s not a real beach – just some imported sand with sunbeds on top for inveterate bronzers). The crowd is upscale (valet parking, boat service from your yacht), the cocktails are pricey, but the view is worth the splurge.

Beaulieu boasts four boulangeries and three pastry shops, but at the recently opened Divines Farines you can get a wide variety of breads with organic flour or without gluten, plus bagels, sandwiches, salads and pastries for gourmet picnics. Best bet: the Matcha green tea brioche, and also the turmeric bread. 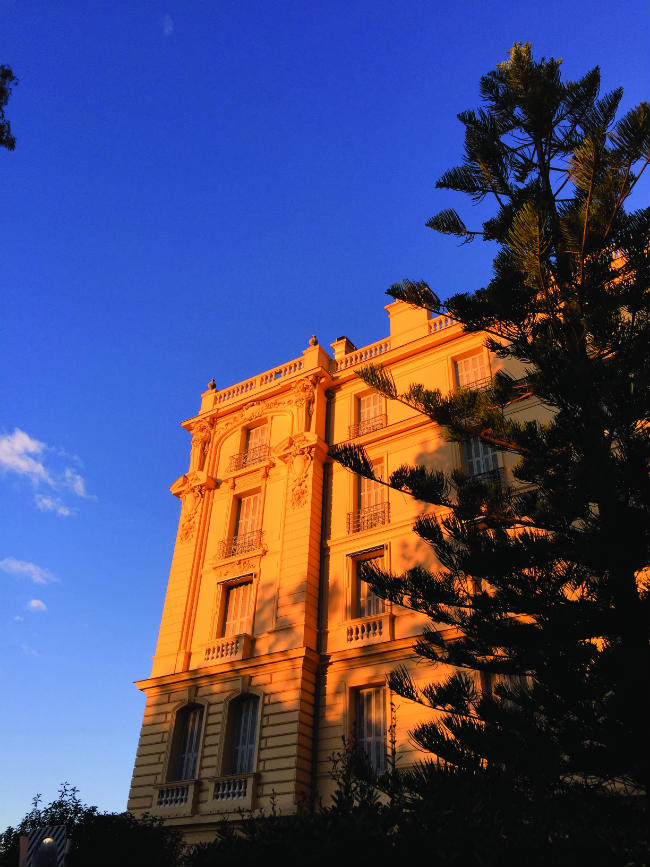 Previous Article A Walker’s Guide to Brittany
Next Article South of France: Experience the Canal du Midi, Classified by UNESCO