Cruising the Loire from the Coastal Port of Saint-Nazaire 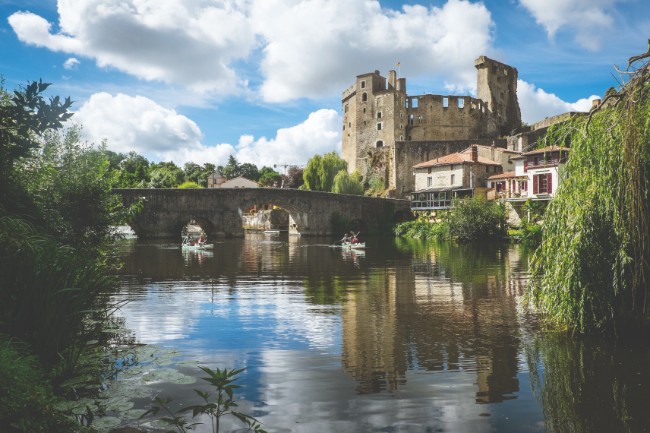 The Loire is France’s longest river, rising in the Ardèche mountains more than 1,000 kilometres from the point where it meets the Atlantic. By the time it reaches the lower sections in Maine-et-Loire, it begins to take things at a gentler pace, collecting the silts that create the signature landscapes of sandbanks, islands and fenlands plied by the flat-bottomed craft we tend to associate with this graceful river. Our floating hotel, CroisiEurope’s MS Loire Princesse, is a modern paddle steamer capable of navigating from the Saint-Nazaire estuary upstream, beyond the famous port city of Nantes and towards châteaux country. But even this style of ship can’t reach that far inland – and this was especially true with the record low water levels that the river experienced during the long, hot summer of 2018. Luckily, there’s plenty to see and do in the stretch leading from the sea, starting at Saint-Nazaire. 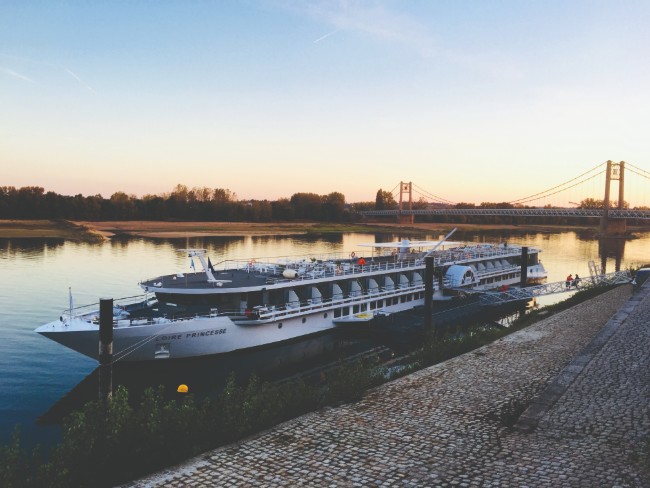 German U-boats preyed ruthlessly upon transatlantic shipping during the Second World War, so it’s perhaps ironic that a U-boat submarine pen should be the place for a museum celebrating the age of the great ocean liners. But that’s exactly what the creators of Escal’Atlantic have achieved in the port of Saint-Nazaire – and it makes for an enthralling journey back in time to a period of maritime pride and glamorous travel.

In the 19th century, the ever-increasing size of cargo ships arriving at Nantes from around the world meant that navigating upstream to the established port was becoming more challenging. The Loire tends to silt up (in fact, the name Loire derives from the Gaulish name ‘Liga’, meaning silt or sediment) and it eventually became impractical to get deep-hulled ships that far up river. The new docks at Saint-Nazaire, at the mouth of the Loire estuary, were inaugurated in 1856 and became the arrival and departure point for transatlantic shipping to and from the West Indies and Mexico, eventually leading to mail and passenger services and the building of the ocean liners, known as paquebots in French, that would make the lucrative New York run.

The port of Saint-Nazaire. Photo: Shutterstock

In 1940, the occupying Germans immediately recognised the strategic value of Saint-Nazaire, with its direct access to the Atlantic Ocean. They constructed 14 U-boat pens here in a monolithic concrete structure 300 metres long and 130 metres wide. To withstand Allied attack by bombers, the entire building was constructed from reinforced concrete with a roof 18 metres thick. Perhaps unsurprisingly, it is still standing, and one of these same U-boat pens now houses Escal’Atlantic. 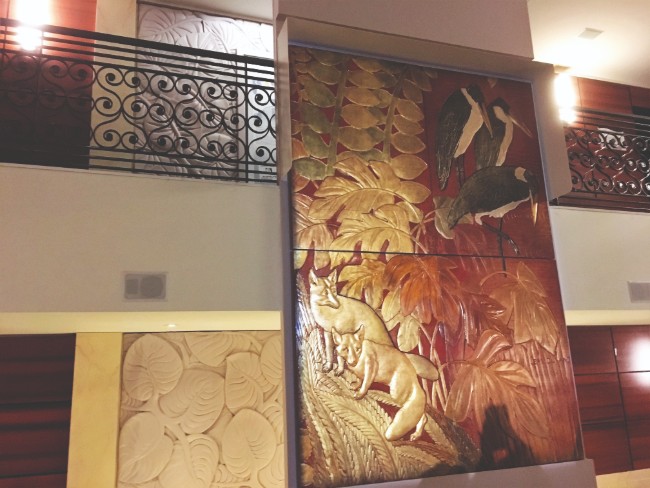 It is more of an experience and a celebration of the great era of liners than it is a traditional museum. Your tour starts, fittingly, on a gangway, as you enter a series of passageways, ship interiors and cabins – just as if you were on an ocean liner. Almost 200 objects taken from legendary ships such as the SS France, the SS Normandie and the SS Liberté adorn the various spaces of Escal’Atlantic, including crockery, furniture and travel accessories. Perhaps finest of all is a stunningly beautiful, original Art Deco lacquered panel from the actual Normandie liner. There’s also a dramatic promenade deck with a clever video projection that recreates the atmosphere of being at sea on a moonlit night. Before you disembark, be sure to try a cocktail at the ship’s bar!

Many recreated “experiences” that celebrate bygone ages are constructed within long-defunct industrial zones. But not here, because the port of Saint-Nazaire is still thriving – and still building ships. Our private excursion takes us into the heart of the commercial shipbuilding yard, which is not open to the public.

Here, clasped by gigantic cranes or cocooned in enormous dry docks, are the skeletal beginnings of some of the world’s largest cruise ships being assembled like colossal pieces of Lego. 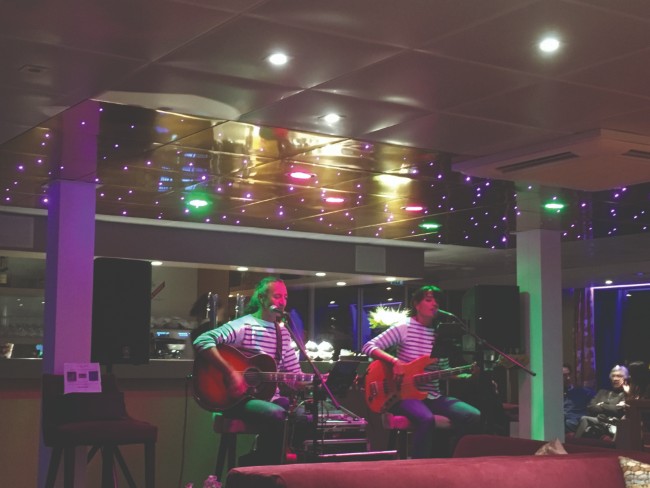 Entertainment on board the Loire Princesse. Photo: Guy Hibbert

The order books are full. The very same port that once launched the Normandie (1932) and the France (1960) is now building mega-hotel ships like MS Symphony of the Seas for Royal Caribbean, and several giants for the Italian MSC line, as well as being the proud constructor of Cunard’s flagship, the Queen Mary 2, back in 2003.

Leaving the modern shipyard and port behind, we travel gently up river to the oft-overlooked city of Nantes, the historical capital of Brittany. It started trading as a port as early as the 4th century and has continued to grow, develop and adapt over the centuries with each turning of the tides of commerce. 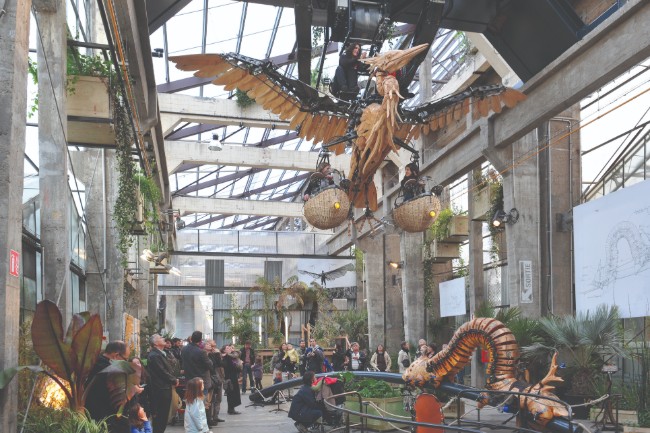 Eventually it became one of the leading gateways to the Atlantic routes, welcoming Spanish, Dutch, Irish and Portuguese merchants trading wine, wool, spices, sugar and rum. During the 18th century the port was responsible for nearly half of all French traffic. Sadly, one of the commodities traded on the run to Africa and the West Indies was slaves; a museum on the Nantes quayside provides an insight into the dark days of the port’s involvement in the slave trade.

MS Loire Princesse moors right opposite Nantes’s most famous tourist attraction, Les Machines de l’Île. From our cabin we can see the famous giant mechanical elephant plodding its way across the old boatyards, sending plumes of spray at unwary tourists. 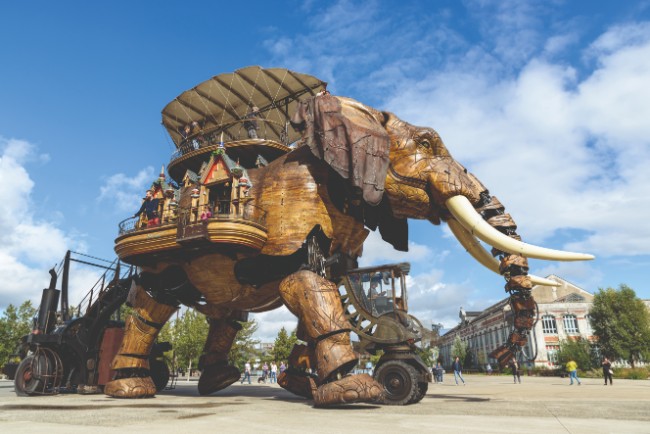 The elephant at the Machines de l’Île. Photo: Shutterstock

Inside the old shipyard workshops is housed an impressive mechanical menagerie featuring a spider, a heron and a giant ant – highly original creations that blend the imagination of Jules Verne with the mechanical universe of Leonardo da Vinci and Nantes’s industrial history. Coming in 2022 is an enormous new project, the Arbre aux Hérons – the Heron Tree – a colossal garden in the sky inhabited by flying creatures of all descriptions.

But Nantes is also blessed with attractions of the more traditional kind. The old city is a must-visit. 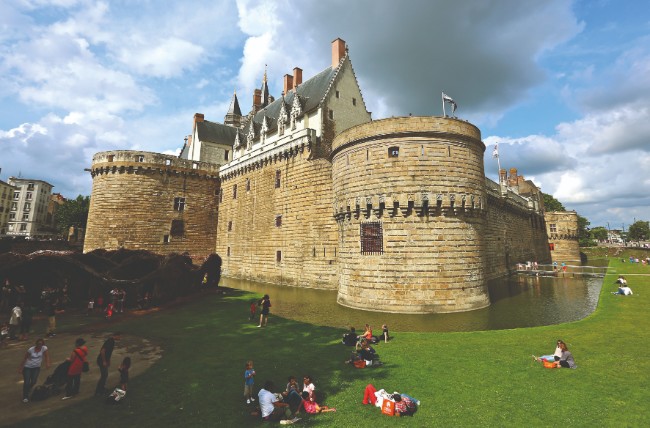 The Château des Ducs de Bretagne was once the political centre of the province of Brittany. Photo: CroisiEurope

For shopping, stroll the pedestrianised streets, like the rue Crébillon, or enjoy the timber-framed houses of the medieval Quartier Bouffay, or marvel at the super stylish, glass-topped Passage Pommeraye, a 19th-century shopping arcade replete with classical statues. An unmissable attraction in Nantes is the Château des Ducs de Bretagne. An impressive white-stoned fortress, and the former residence of the once all-powerful dukes, the castle has been wonderfully restored and now houses a fascinating history museum that will tell you all you could possibly want to know about Nantes and Brittany from the dawn of time to the present day. 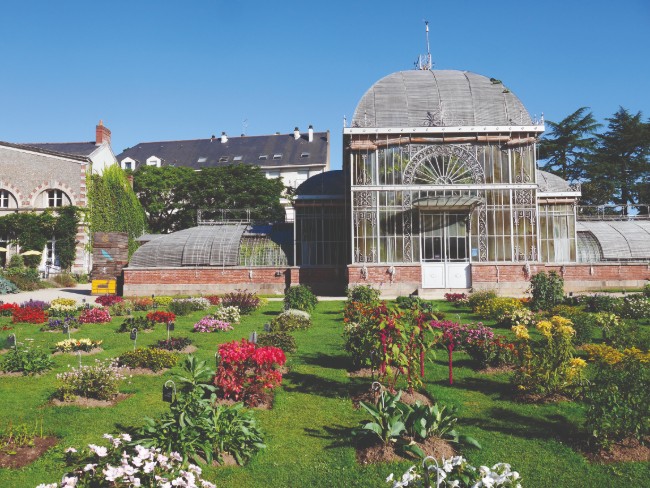 The botanical gardens in Nantes are a bubble of calm

Another must-see is the Jardin des Plantes, a historic botanical garden and park in the centre of the city. A stroll around this beautiful green space will reveal a huge collection of species and plants built up over the past 150 years – many of them brought in by ships arriving from all over the world. You can also visit the greenhouses and see the palms and tropical plants.

Our river cruise continues inland towards Ancenis. The day begins with a spectacular dawn light rising over the soft wisps of river mist, with only the occasional flight of a heron to accompany the sunrise.

The MS Loire Princesse is comfortable and airy, with large windows framing views of the quaysides. Up top there is an enormous sun deck where you can get a captain’s eye view of the world going by or just sit and enjoy a coffee or a cocktail. The food on board is excellent, and the staff, who seem to represent almost every European nationality, are friendly and helpful. Most nights there is entertainment and a live band. At one point our compère for the evening asks for a show of hands – and it turns out we have 14 different nationalities on board.

It’s tempting to stay on board and just watch the river flow by – there is a calming, peaceful quality about the lower stretches of the Loire – but you’ll miss some of the interesting coach excursions on offer.

First stop: Clisson, a picturesque riverside village with a historic château and a medieval bridge across the gentle Sèvre Nantaise river.

A (surprising) Tuscan villaggio in the heart of the Loire Valley, it is the handy work of artist-creator François-Frédéric Lemot, who fell head over heels for Clisson in 1805 and swiftly remodelled it in the Italian style. 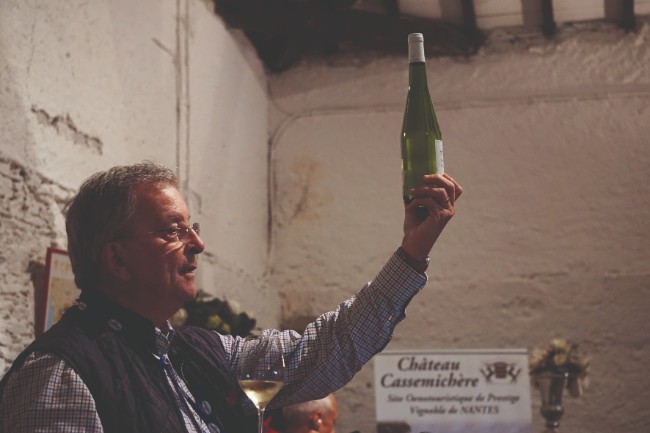 Then it’s on to Muscadet wine country where, at the Château Cassemichère your characterful host and winemaker Philippe Ganichaud takes you on a tour of the chais and a dégustation – proving that there is a lot more to Muscadet than the ultra-dry bargain wines we have often been served.

And, of course, a tour of the Loire would not be complete without a spot of château-hopping. It’s a long day of driving but it’s worth it to discover three dramatically different Renaissance marvels. 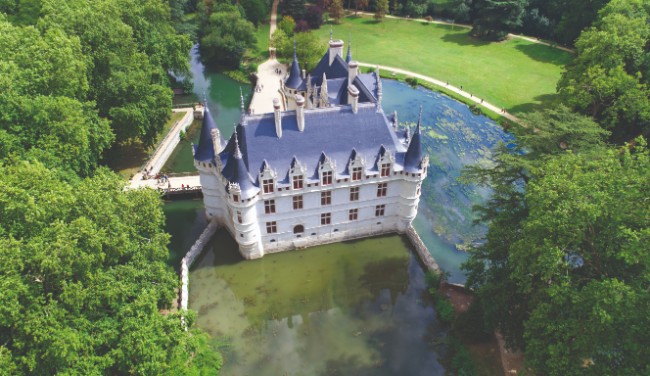 First we visit Azay-le-Rideau, built by Gilles Berthelot on a small island in the middle of the
Indre river during the reign of Francis I. The castle is a national monument and possesses all the classic refinement found in French Renaissance architecture – the image of its white stone turrets and dormer windows reflected in the water-mirror is unforgettable.

Villandry is another masterpiece, but here it’s the gardens that are the star attraction. Spread out over three levels, they are an impressive showcase of formal Renaissance gardening. 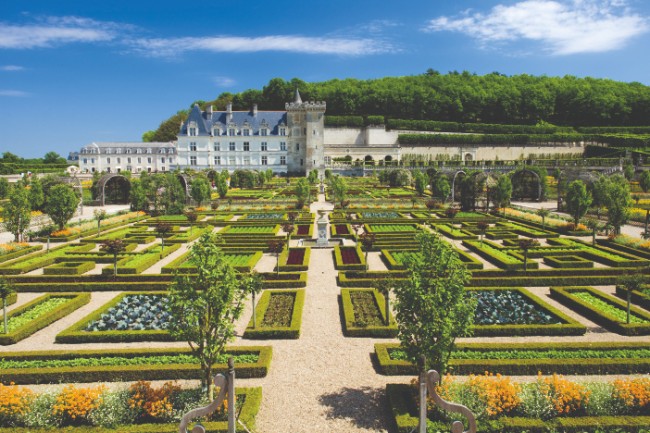 The spectacular gardens of the Château de Villandry. Photo: Shutterstock

The tour continues with a visit to the Château d’Ussé. Rebuilt in the 15th and 16th centuries, this stronghold with fortified towers, turrets, and steeples looks like something out of a fairy tale, and indeed is thought to have inspired Charles Perrault’s Sleeping Beauty.

After a busy but worthwhile day, there’s just enough time for a splendid gala dinner on board before we passengers enjoy our own beauty sleep as the captain and crew navigate the Loire Princesse safely back to our dock in Nantes. 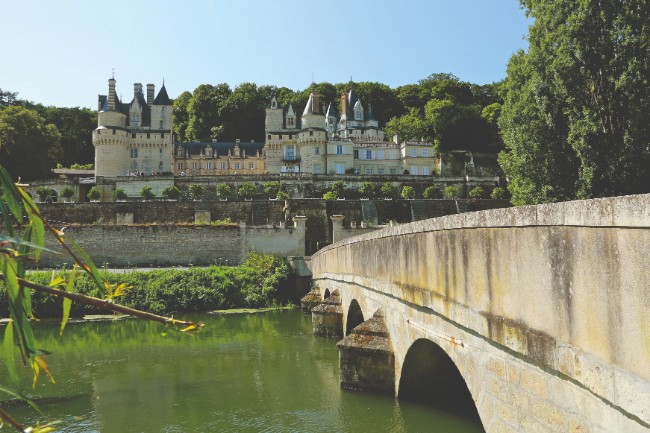 The Château d’Ussé seen from across the river Indre. Photo credit: CroisiEurope