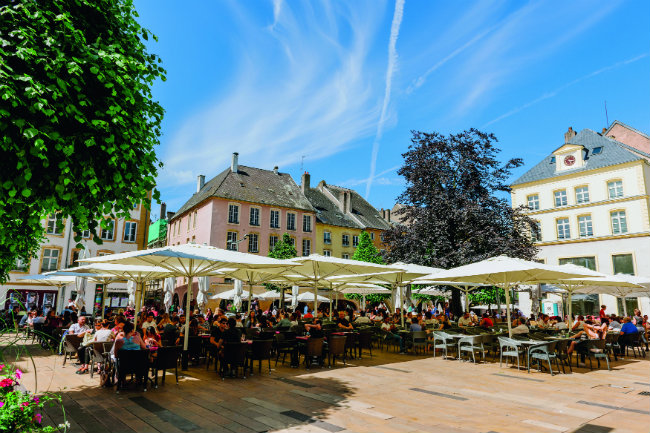 There is in France a famous children’s song about a girl who walks through Lorraine in her clogs… Yet few foreign visitors follow in her footsteps. This is a shame as there is a rich and unique culture here with much to offer the intrepid. Dominic Bliss introduces us to the highlights

There did the name Lorraine hail from? Even the locals are unlikely to know that they have the 9th-century Holy Roman Emperor Lothair I to thank for the name of their region. He and his son, Lothair II, ruled huge swathes of the Frankish Empire, and one of their kingdoms – a vast province stretching from modern-day France’s eastern border all the way up to the north of Holland – was called Lotharingia, which later evolved into the French name Lorraine.

Modern-day Lorraine is much smaller than Lotharingia, but it still covers over 9,000 square miles from the Vosges in the south up to the borders with Belgium and Luxembourg in the north. The population of 2.35 million is mainly focused around the major cities and towns of Metz, Nancy, Vandoeuvre-lès- Nancy, Thionville and Épinal. In the big 2016 regional shake-up Lorraine became part of Grand Est. A shame, really, because if it suffered from a lack of identity before, it now risks being swallowed up by this mega-region. 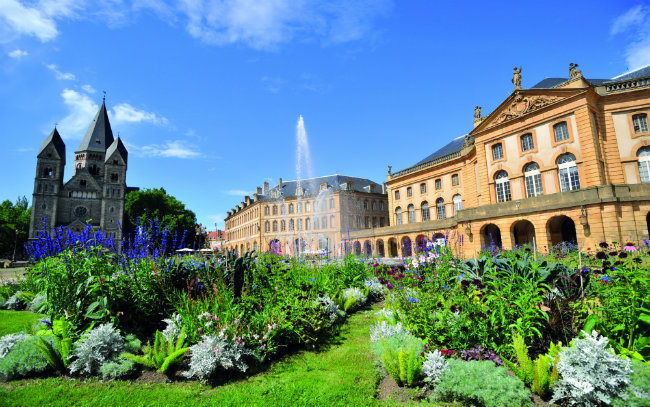 Thank God for quiche Lorraine, then. Even if Lorraine as a region isn’t France’s most famous, at least this delicious tart has put its name firmly on the map. Any visitor really ought to try the genuine article (rather than the inferior versions that make their way abroad). The key is to cook it with Gruyère cheese and French lardons, rather than Cheddar cheese and bacon, as the Brits are wont to do. Other key ingredients include eggs, cream and milk. 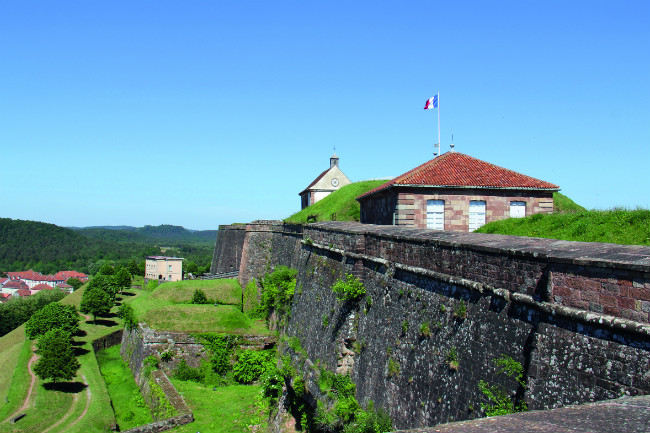 The citadel at Bitche. Photo: Fotolia

Sharing a border with Luxembourg, Belgium and Germany, Lorraine has been invaded, annexed, liberated, and re-invaded countless times over the centuries. You can still pick out the Teutonic influence in the architecture of Metz, and in some of the food, though locals will emphasise their Frenchness at any opportunity. This is not surprising, given the way they were treated by the Germans during the Second World War. Unlike Alsace, which has its own Germanic language, there are very few hints of German heard in Lorraine, except in the Pays de Bitche, in the far northeast. Much of Lorraine is still part of the Paris Basin, with the plateau lorrain cut across by the Moselle, Meurthe and Meuse rivers. To the east the land becomes hilly, and then mountainous, as you reach the picturesque peaks of the Vosges. 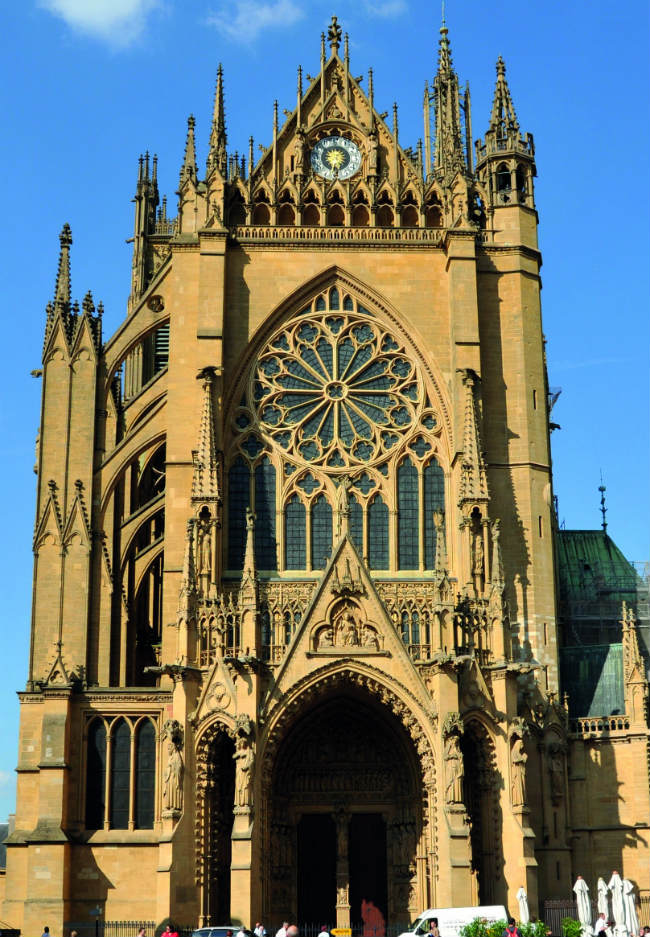 Most visitors will spend time in the very pretty city of Nancy which, at the beginning of the 20th century became world famous for its Art Nouveau furniture and its glass (don’t miss the Musée de l’École de Nancy), and still punches well above its weight thanks to the stunning place Stanislas, a UNESCO World Heritage Site since 1983. Built between 1752 and 1755 under the aegis of Stanislaus I, Duke of Lorraine and King of Poland, it’s the beating heart of Nancy, especially in the summer – and also in December, when it hosts Christmas parades. You can’t help but find it uplifting – even on the greyest of days, the sand-coloured paving stones put you in a positive frame of mind. 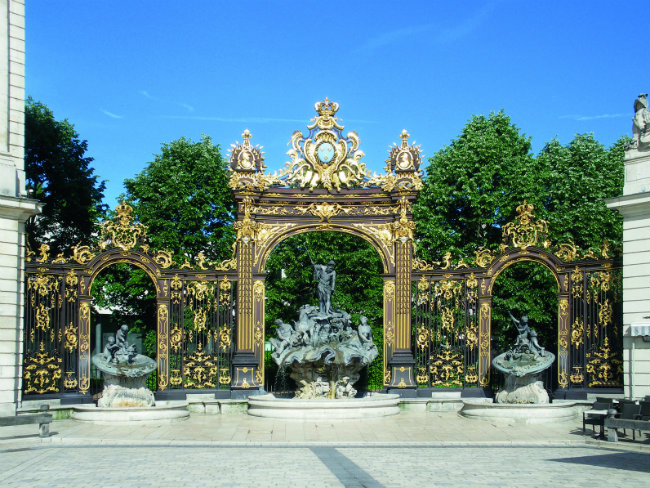 Visitors to Lorraine also head north up the River Moselle to Metz (pronounced ‘mess’), the regional capital. The medieval cathedral with its awe-inspiring stained-glass windows (some of them more recent additions by Marc Chagall) and 42-metre-high interior will take anyone’s breath away. It stands in contrast to the more solid Teutonic styles of the city’s post office and railway station. 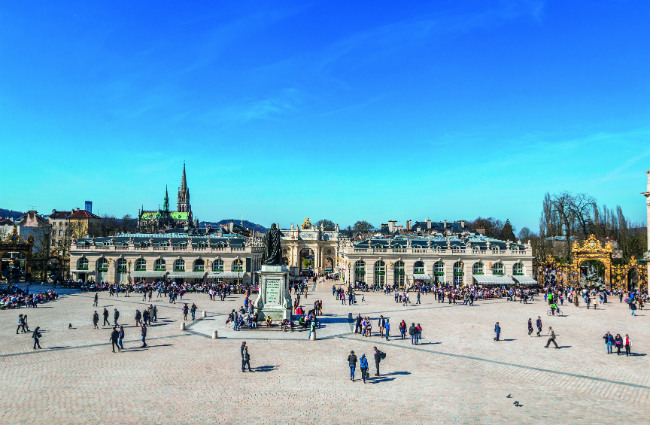 Be sure to visit the Pompidou Centre in Metz, France’s largest temporary exhibition space outside Paris, with its three galleries, theatre, auditorium, distinctive roller-coaster of a roof, and 77-metre spire. Opened in 2010, it was designed by the Japanese architect Shigeru Ban, who says he was inspired to create the shape of the roof after he stumbled upon a traditional Chinese hat in an antiques shop in Paris. From above, the roof is hexagonal in shape. 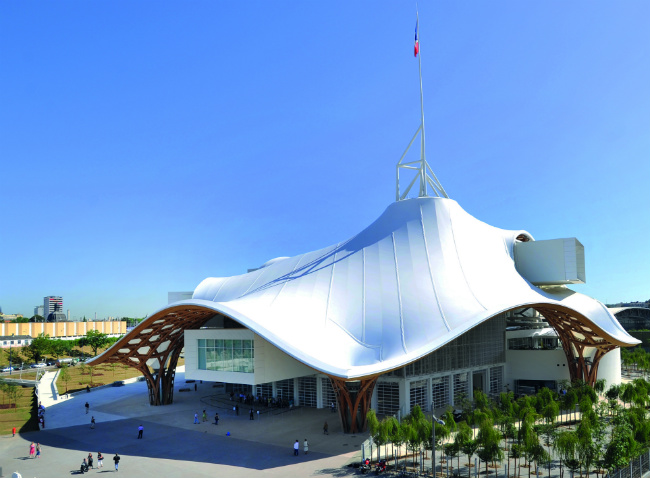 “To the French, the hexagon is a symbol of their country, as it is similar to the geographical shape of France,” Ban explains. “Furthermore, the roof is composed of a pattern of hexagons and equilateral triangles inspired by traditional woven bamboo hats and baskets of Asia.” All this culture is sure to give visitors one hell of an appetite. 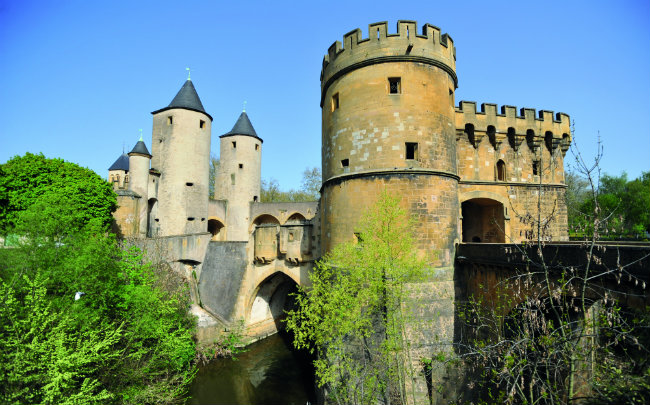 La Porte des Allemands – ‘the Gate of the Germans’ – is an icon of the city of Metz. Photo: OT Metz

Fortunately, Metz has an excellent dining scene. One of its highlights is La Table (formerly known as Le Magasin aux Vivres), a Michelin-starred restaurant inside the city’s old military arsenal. There’s even a private dining room here, where chef Christophe Dufossé likes to show off his skills in front of the diners. He lets his guests choose 12 ingredients in advance which he then combines into one glorious dish. If you’re lucky, he’ll do much of the cooking right there next to the table. Currently the rate is €175 per person, without wine. “I’m an adventurous epicurean,” Dufossé says. “A tireless pioneer of the senses, and a creative who’s always at boiling point.” 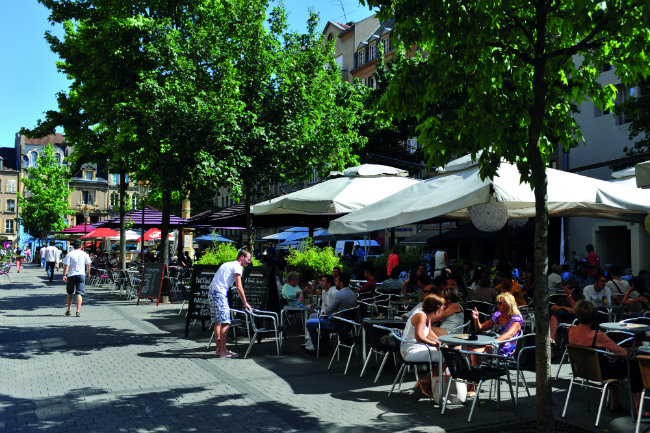 Head west from Metz, along the A4 autoroute, and it’s not long before you come to the First World War battlefields around the town of Verdun. In February 1916 the Germans started to bombard the area north of the town with all the artillery they could muster. During the ensuing battle, which lasted until the end of that year, 300,000 soldiers on both sides died and a further 400,000 were wounded. 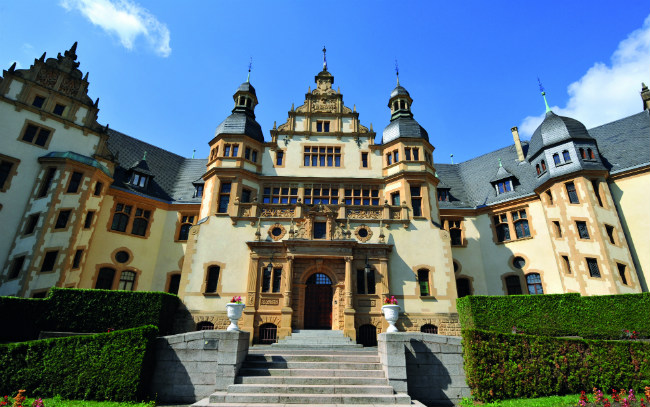 The Palais du Gouverneur was built at the turn of the 20th century for Kaiser Wilhelm II, the third and last Emperor of Germany. Photo: OT Metz

As the scene of such a tragedy, Verdun still looms large in the French national memory, much as the Battle of the Somme looms in British memory. In villages and towns all over France you will find memorials inscribed with the names of local men who were killed at Verdun. Surrounding the town is a series of battlefields, forts, cemeteries and memorials honouring all those who suffered. These include the Mémorial de Verdun, a key museum in the village of Fleury-devant-Douaumont; Fort de Vaux, where French troops were forced to surrender; Ossuaire de Douaumont, a memorial containing the bones of 130,000 unidentified French and German soldiers; and the Meuse-Argonne American Cemetery at Romagne-sous-Montfaucon, where more than 14,000 graves comprise the largest American graveyard in Europe. 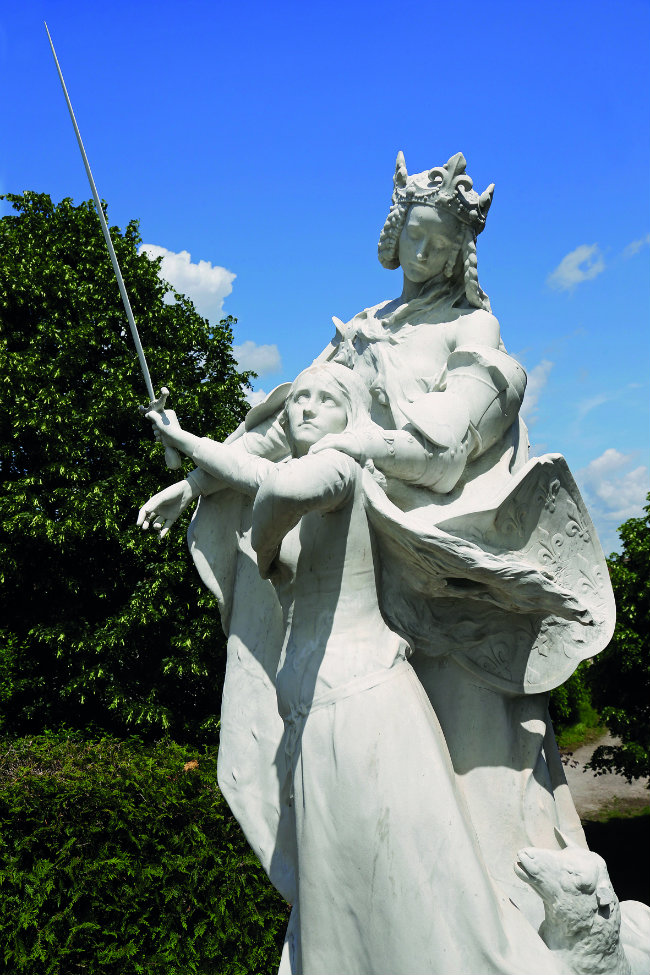 Lorraine also played a key part in medieval history, since this was the birthplace of Joan of Arc. You can find out all about this national heroine in her home town, Domrémy-la-Pucelle, southwest of Nancy, where the house she was born in has been restored as a museum; there’s a historical centre next to it where you can learn all about Joan’s crucial role in the Hundred Years War. 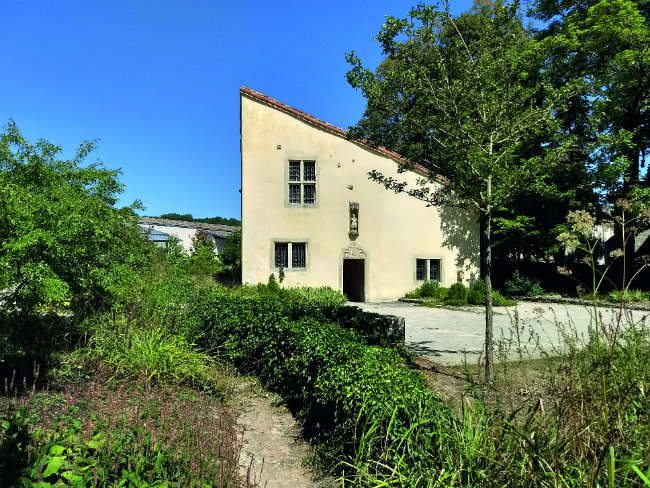 Another important medieval symbol in Lorraine is the famous Cross of Lorraine, consisting of a vertical line crossed by two shorter horizontal bars. No one is quite sure how it came to be emblematic of this region, but, during the recent periods of history when Lorraine was occupied by the Germans, the cross came to represent French nationalism and France’s ambitions to regain her lost provinces. During the Second World War it was used on flags of the Free French Forces. Charles de Gaulle himself is celebrated by a 43-metre-high Cross of Lorraine in the village of Colombey-les-Deux-Églises, just to the west of Lorraine, where he died in 1969.

One town in Lorraine that receives more than its fair share of visitors is Amnéville, not far north of Metz. That’s thanks to its enormous leisure resort, Amnéville-les-Thermes. Only the most disgruntled misanthrope could fail to find something of interest here. More American in style than French, it includes a concert hall, artificial ski slope, theme park, thermal baths, tree-climbing park, zoo, casino, brewery, shopping centre, cinema, amusement park, golf course, bowling alley, ice rink and nightclub. You could easily spend a whole week here without running out of things to do. 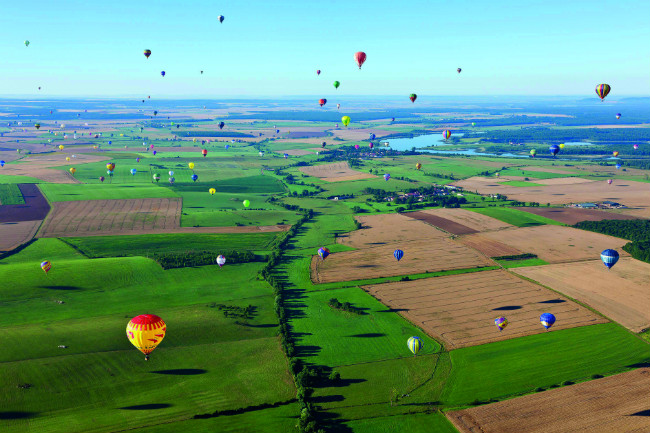 For more outdoorsy types, Lorraine has huge rural swathes of land you can lose yourself in. The Parc Naturel Régional de Lorraine is split into two sections, the larger lying west of Nancy and Metz, the smaller centred around the Étang de Lindre. Then, in the far east of Lorraine, are the Vosges mountains. One of France’s lesser-known (and lower-altitude) mountain ranges, they stretch for 75 miles from Belfort in Franche-Comté to the German border in the north, covering more than 2,000 square miles of heavily-forested upland in both Alsace and Lorraine. They are very green – and very easy to get lost in. The highest peak is the Grand Ballon (in Alsace), at 1,424 metres. Two of the Vosges’ regional parks – the Parc Naturel Régional des Vosges du Nord and the Parc Naturel Régional des Ballons des Vosges – cover parts of eastern Lorraine. In winter, the mountain range offers skiing in several resorts. The best known within Lorraine are Gérardmer-La Mauselaine, La Bresse-Hohneck and Ventron.

With its combination of beautiful countryside and wonderful cities, Lorraine has enough to keep tourists intrigued, whether they’re townies or country types. This explains much of its enduring appeal.

Dominic Bliss travelled to Lorraine using Loco2. Recognised in 2018 as the UK Transport Supplier of the Year, Loco2 enables low-cost booking for train travel throughout the UK and Europe. Loco2 is famous for offering a low CO2 way to travel, at a low price, hence the name. Users can buy tickets on mobile via the Loco2 app or on www.Loco2.com 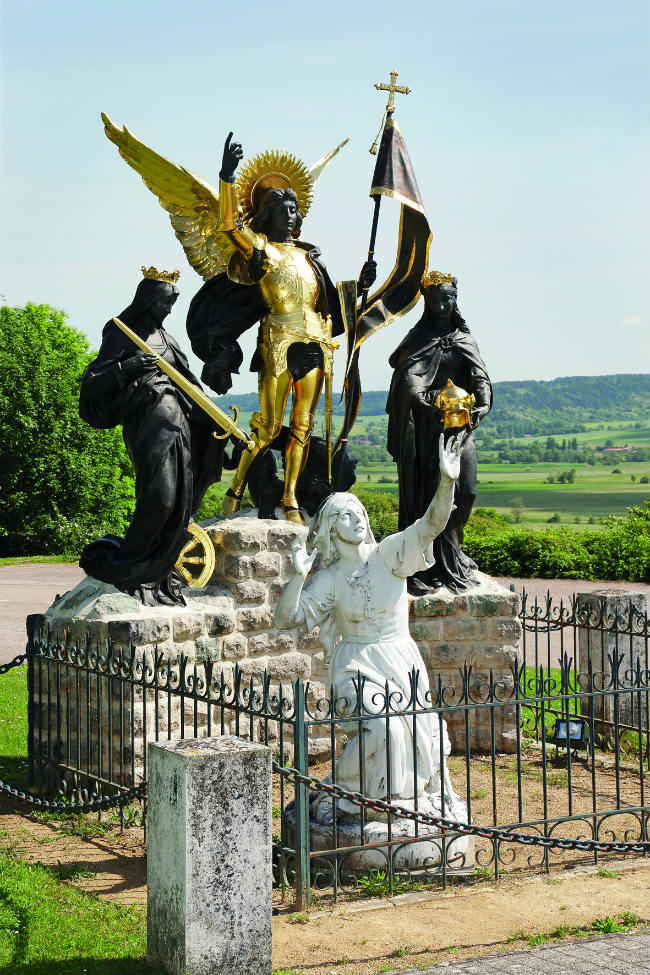 Joan of Arc is perhaps France’s pre-eminent national heroine, and Lorraine is where she came from