“Save Short Film If You Can”: The 29th International Short Film Festival 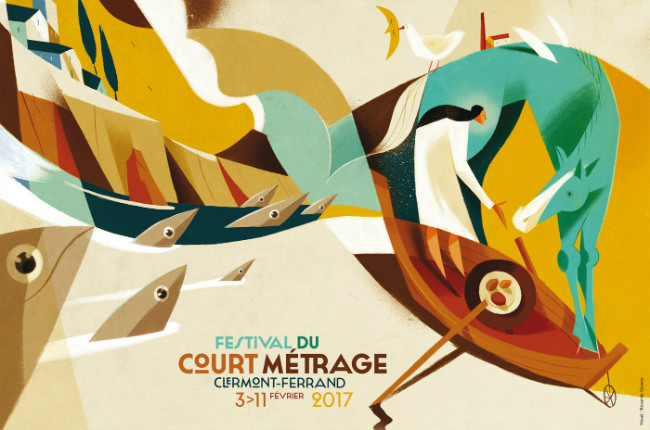 There’s no red carpet. The nicest hotel in town is the new Mercure, a chain going for €133 a night at the peak of the event. Film screenings are crowded and sometimes uncomfortable; many of the rooms are big public meeting spaces designed more for PowerPoint presentations than cinematic effect.

But the 29th edition of the International Short Film Festival in Clermont-Ferrand is one of the film industry’s most vital and important events. (There’s also a competition devoted strictly to French works; the event in 2017 will be the 39th edition of this branch of the festival.)  France’s second most important celebration of film (after Cannes), it is expected to draw 160,000 people over nine days next February – producers, directors, buyers for TV networks and movie houses, critics, and lovers of the art form known as “the R&D department of the cinema.”

A Gateway Event for the Film Industry 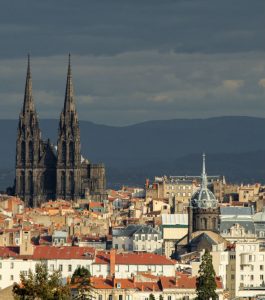 For the 2017 edition, the Festival will feature screenings of hundreds of new productions including animated shorts, genre pieces, documentaries and film-school projects. Some of the competition this year will focus specifically on “black humor” and on the emerging creative community doing short films in Colombia. And, for the sixteenth year, it will include a “Lab Competition” – an opportunity for film makers to present “electrifying combinations, arresting viewpoints, [and] accomplished risk-taking” in their work.

This is a “gateway” event – films shown here often go on to feed other major festivals like the one at Sundance, and the auteurs who create short films for this occasion go on to produce and direct the kind of features that get shown at Cannes. Festival managers are conscious of a kind of “live or die” effect; a short film chosen for the competition in Clermont-Ferrand may well go on to appear in twenty other festivals around the world, including prominent ones like Sundance and Montreal, but works not selected here find it much more difficult to get an audience in other events.

A Festival in the Heart of the Auvergne 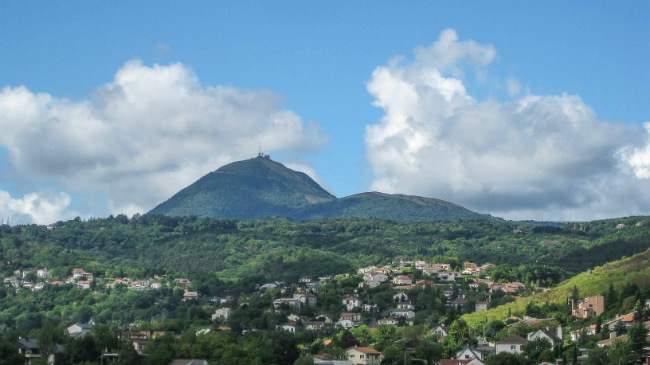 The city’s skyline is dominated by the Puy de Dome, one of the extinct volcanoes in France’s Massif Central. Photo © 2016, Richard L. Alexander

Clermont-Ferrand may seem an odd choice for an event of this importance. A smallish, industrial city (known mostly as the global headquarters for the Michelin tire company), it is five hours south of Paris and five hours north of the beaches of the Mediterranean.  But this is also one of France’s wildest, least-populated and most beautiful regions. A chain of extinct volcanoes frames the skyline, and most of the most important buildings in town have a somber cast, an effect of the local lava stone used to build them. It’s an exotic destination rich in Roman and medieval history but also in great national parks for anyone interested in outdoor sports.

Still, according to Eric Wojcik, one of the Festival’s founding members, Clermont-Ferrand happened to be the center of activity in 1979 for a group calling itself “Sauve Qui Peut Le Court Métrage” – roughly, “save short films if you can”. From this club’s screenings of films its members liked, the event has grown into an international competition and a full-time occupation for the 21 “general delegates” who collectively manage the annual festival. 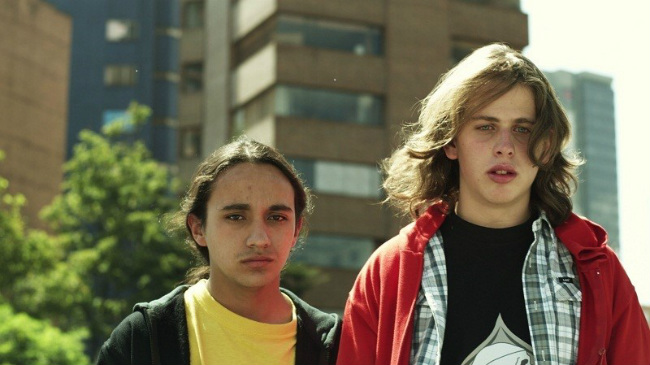 Why the urgency to “save short films”? Wojcik says that at the end of the 1970s movie theaters were being cut up into cineplexes and their programming was reduced from a richer mix to a single feature film and some advertisements. The group in Clermont-Ferrand felt compelled by this evolving reality to create new outlets for shorter films. They also felt an obligation to provide a link between filmmakers and the people who might buy and distribute their works. 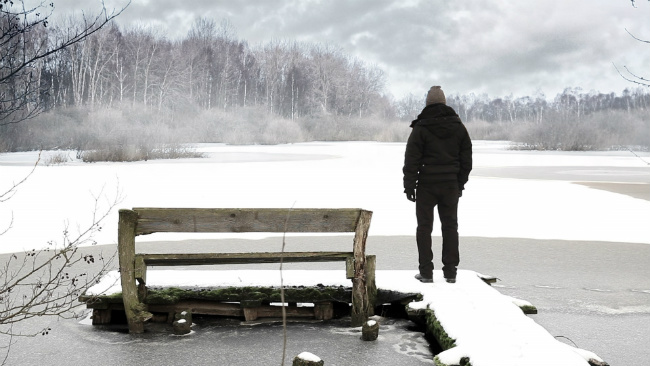 Scene from Daheim, by German filmmaker Kai Wido Meyer, to be presented as part of the “Black Humor” retrospective in this year’s Festival. Photo © 2016, DFFB

“Things are better now,” Wojcik says. “We have more than 100 television chains around the world who buy the films we show in the festival, and there are many new channels of distribution on the internet.”  In addition to providing this commercial link, the festival works to encourage filmmakers, who often work alone and with little money in this genre; according to Wojcik, “when we find a film that is not quite finished, we have to imagine how it could be and give guidance to the creator.” At this year’s event in February, more than 3,500 people from the industry – filmmakers, representatives of theaters and television networks, and journalists – will meet each other in this “marketplace” organized in Clermont-Ferrand. 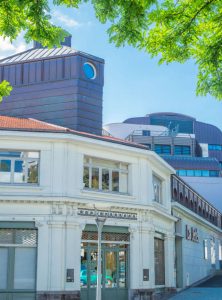 The festival has a permanent home in the city in a building called La Jetée, a loving reference to the 28-minute French science fiction film of the same name from 1962. In addition to preparing the annual events, Sauve Qui Peut Le Court Métrage also maintains a Documentation Center (open to the public) housing more than 100,000 short films. Its members also mount a number of educational outreach programs across France to take the art of court métrage to places that might never see it. Eric Wojcik describes his own activities during the year: “We buy the rights to show films from the Festival in small towns, in prisons, and meetings of cinema clubs and local associations. We’ll go to a place like Rochefort-Montagne or Ambert with a professional projectionist, set up in the school gym, show films to students during the day and to their parents in the evening.”

Why does it matter? 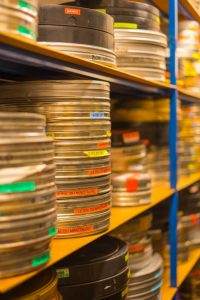 The Festival maintains an archive of more than 100,000 short films at its headquarters in Clermont-Ferrand. Photo © 2016, Richard L. Alexander

This dedication to the art of court métrage comes from a fundamental belief that the form is “the Research and Development department of the cinema,” Wokcik says. Because the films are so short, they must get quickly to the essentials of story-telling, both in creative and technical terms. Court métrage implies less risk (and therefore fewer financial barriers), and creators have more tools like PCs and Photoshop to help realize their personal visions of reality.

If you go to Clermont-Ferrand in February, you’ll certainly see things you might never have imagined or expected to see in a theater. There are no specific selection criteria, according to Wojcik – just an expectation that these films deliver “intelligence, visual impact, quality in the acting and music – in short, something astonishing.” And the filmmakers you encounter here may very well be the same ones you see in your local cineplex a few years from now!

The 29th annual International Short Film Festival and 39th National Short Film Festival will be held from February 3rd to February 11th, 2017. Flights to Clermont-Ferrand leave Paris (both CDG and ORY) several times a day, and trains run regularly from the Gare de Bercy. Both the Hotel Mercure Centre Jaude and the Hotel Oceania are conveniently near most of the festival venues; a more complete list can be found here. Ticket packages are available on the Festival’s website.