Springtime Idyll: A Walking Tour in the Alpes-Maritimes 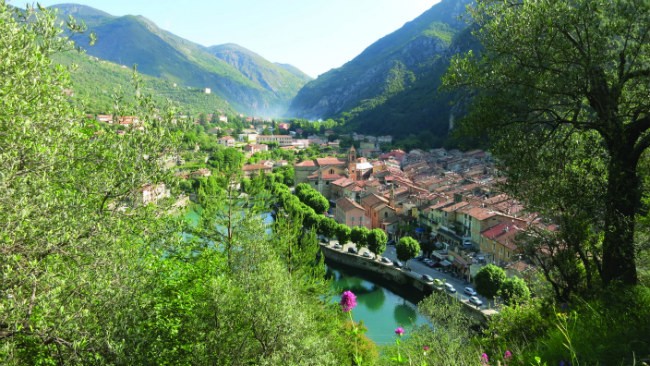 As the aptly named Train des Merveilles (‘Train of Wonders’) sped along, we were presented with a visual amuse-bouche of the landscapes we’d be seeing up close on a five-day walking tour through the high Provençal mountains. The area known as the Alpes-Maritimes, which tumbles down to the French Riviera, boasts a patchwork of crumbling, ancient stone towns flanked by dense forest, dramatic cliffs and rocky rivers.

Though many wonders spring to mind at the mention of Provence, flowery alpine fields and vast snowy peaks are generally aren’t among them. Yet there we were, during the last week of May, making a steep ascent through silvery olive groves, against a backdrop of jagged mountains, on the way to our starting point, the tiny medieval village of La Brigue.

With no real train station to speak of, and not a soul on the platform, we double-checked to confirm that we’d disembarked at the right place. A quick call to the Fleur des Alpes hotel, our destination for the night, summoned a beat-up van which screeched to a halt in front of us, gravel flying. Robbie, our host for the evening, jumped out to greet us, threw our suitcases in back and motioned for us to ride up front, on a death-defying ride along twisting alpine roads, through scenery so breathtaking we forgot to be terrified. 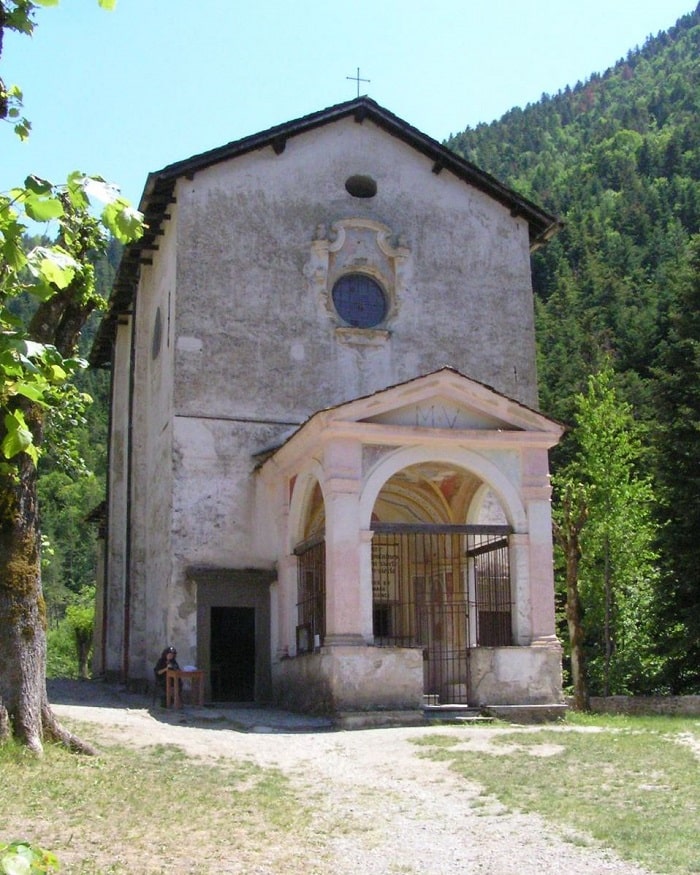 Having travelled from Paris that morning, my companion, Dia – a seasoned walker who’d come all the way from Portland, Oregon – and I were happy to have a few hours of daylight to explore the town before dinner at the hotel. Alas, it wasn’t long enough to make the scenic four-kilometre trek to the 12th-century Chapelle Notre-Dame des Fontaines, whose 15th-century frescos are considered among the finest in France.

Our disappointment was allayed, however, as we stepped past the sober exterior of the Collégiale Saint-Martin church on La Brigue’s tiny town square. The Romanesque church’s opulent paintings and frescoes, gilding, trompe-l’oeil marble and melancholy saints were a surprise indeed. Unlike the elegant restraint that’s customary with Gallic country churches, we were delighted by this gorgeously unbridled and very un-French display of religious fervour. 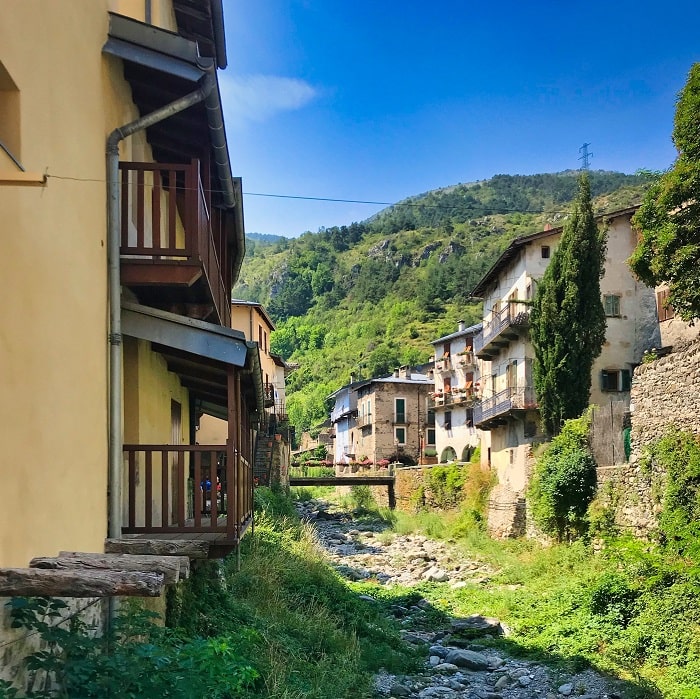 But wait, aren’t we in France? Well, yes and no. Until 1947, when Italy was carved up by the Allies and the Soviet Union, the strategic mountain territories of Briga and Tenda were part of the Italian colonies. Claiming that the lands weren’t really Italy’s anyway, having been gifted to King Victor Emmanuel II as hunting grounds by Napoléon III during the 19th century, France made a grab at the territory, which contained the only viable mountain pass and three Italian electricity-generating plants.

In truth, these lands, including the coastal towns of Menton and Nice, had been passed back and forth between French and Italian royals and nobles for centuries. By the end of World War 2, the Alpine region north of Menton had been in Italy’s possession for almost a century. The Italian influence was everywhere – nearly every plaque on each home in La Brigue bore an Italian name and the public signage was bilingual. 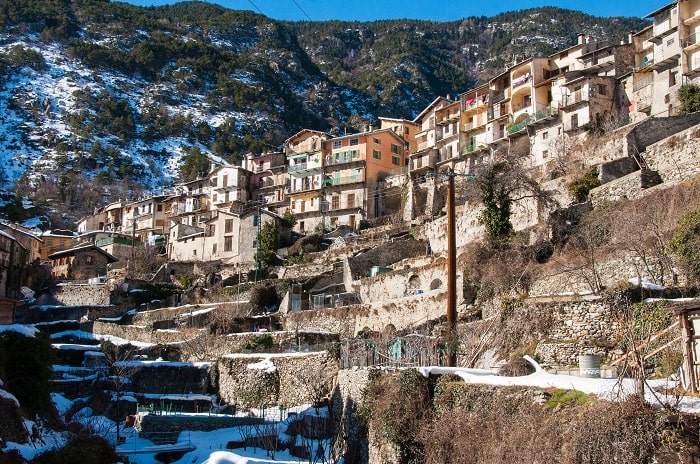 “The people here had a choice,” explained Robbie, our host, “stay and be French or go find a new home in Italy. The old people had been here all their lives –their children and grandchildren were here. Most just adapted.”

After a walk through this picture-perfect town, our hunger for dinner was – truth be told – higher than our hopes. Though the Fleur des Alpes was perfectly comfortable and homey, it had no highbrow pretentions. That said, seated in the pretty dining room with gorgeous views of the mountains and the stream below, we were off to a good start. Robbie soon arrived with choice of homemade ravioli or baked wild trout for our main course – his son had caught three in the stream that day and two remained. After a delicious starter of wafer-thin veal served with homemade aioli, our steaming trout – crunchy with baked almonds and accompanied by a crisp Italian Sauvignon Blanc – was a revelation. There was nowhere on Earth we would rather have been… 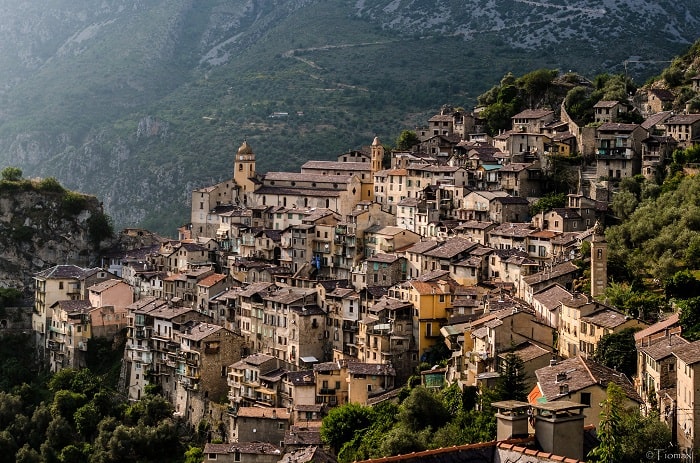 The next morning, we hitched a ride with Robbie from La Brigue to the town of Saorge. This would assure us plenty of time to explore Saorge, by all accounts the most spectacular town on our circuit, and to conserve our energy for the afternoon hike through the valley to Breil-sur-Roya. During the ten-minute ride, Robbie explained that in Saorge, we’d find olive groves, fruit trees and other species which don’t grow in the higher altitudes of La Brigue: “In this part of Provence’s arrière pays [hinterlands] you’ll find a remarkable diversity, from lavender to edelweiss.”

Apart from a few villagers sipping espresso in a picturesque square, the terraced town was so quiet as to seem almost deserted. A short walk through its narrow, winding streets brought the sound of organ music wafting down from a small church above us. Even more gorgeous than La Brigue’s Collégiale Saint-Martin, the apricot-coloured Église Saint-Sauveur was like a geode cracked open: utterly plain on the outside but a gorgeous riot of colour, frescos and gilding within.

Following a hillside path through the upper levels of the town – Saorge is built on a vertical plane and there are almost no horizontal surfaces – we zig-zagged through flower-laden gardens, where ripe red cherries hung tantalisingly within reach. At a pretty public spring, something we would come to take for granted, as they’re a common fixture in every village, we filled our extra water bottles for the walk to Breil.

At the town’s edge, the graceful Franciscan Monastère de Saorge appeared, in a setting so wondrous it was like a mirage. Despite the relative modesty of this beautiful, 17th-century Baroque-style edifice, its superb frescoes, which have never been restored, provided the monastery’s creamy white walls with a splash of brilliant colour.

After lunch next to the remarkable Romanesque bell owner of the Église de la Madone del Poggio, we headed off for our first real walk, for which we were provided with detailed maps and cheerful descriptions of the flora, fauna and history of the area by our guides, On Foot Holidays.

We hit our first snag right away. How to get to the tunnels we’re supposed to traverse at the level of the main road, which, from our bird’s-eye vantage point, looked dauntingly far away. We set off optimistically, following an easy path through exquisite, flower-strewn fields as we descended into dense forest. Enthralled by the scenery, we weren’t too worried when our path didn’t seem quite in sync with the map. Nor, strangely, did we panic when the soles of my much-neglected walking boots crumbled to dust, within minutes of each other, an hour into the walk.

Temporarily re-shod using some sticky tape to hold together what was left of my boots, we called the emergency number provided by On Foot Holidays. The company’s Richard Petitjean, who was delightfully reassuring and friendly, confirmed that we’d gone off-trail and talked us through our options. After a pleasant stroll back through Saorge, we hopped on the Train des Merveilles to Breil, determined that the next day, thanks to a fortuitous pair of backup shoes, we would walk. 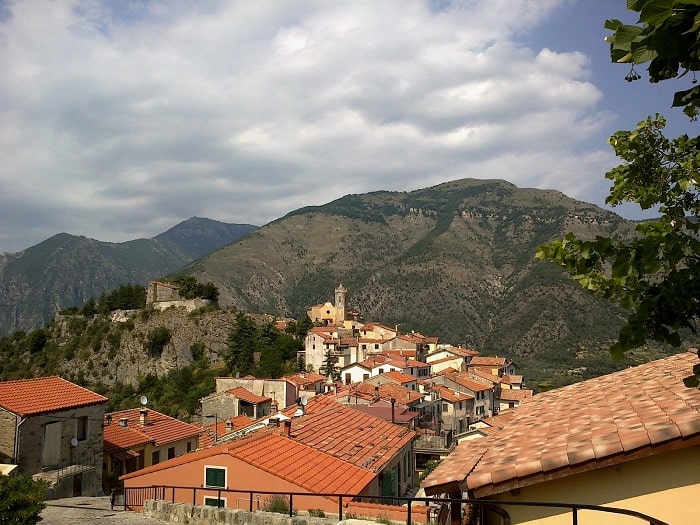 A cloudless sky and gentle breeze augured a perfect day for our 13-kilometre trek. Fortified with lunch from a local boulangerie, plus a shot of espresso for courage, we began our ascent. Within 20 minutes, we were taking in spectacular views of Breil’s terracotta rooftops and turquoise river. Although somewhat commonplace by then, we were still delighted with the magnificent views to be had from every vantage point. Across each turn on the easily passable trails we were greeted with new marvels, including a lone yucca plant as tall as a man and wildflower species so numerous that we stopped taking notes.

Our walk took us up and down, past forests and stepped olive groves, towards the day’s longest ascent, through gorgeous wooded paths to the colourful village of Piène-Haute, which is perched like an eagle’s nest that’s ringed by mountains. Flowers cascade from the village’s window boxes and the gardens of its stone houses, which are all painted in merry shades of marigold, sky blue and apricot. The square just below the lemon-collared facade of the Église Saint-Marc proved the perfect spot for lunch and taking in the views, before we made the long descent to the town of Sospel. 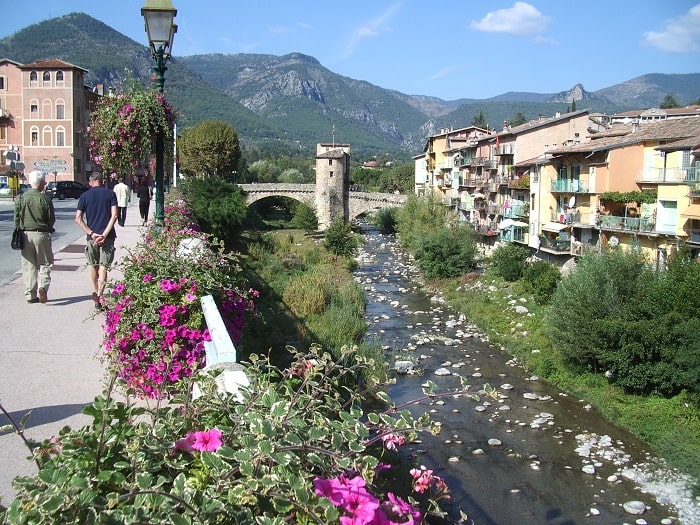 Once in Sospel – tired, dusty and in need of a change of clothes, but having enjoyed a glorious day – we reached the Auberge Provençal. Suitably refreshed, we strolled around the postcard-perfect ville and happened upon Vinum Veritas, a chic little wine bar with a terrace overlooking the river. It was just the spot for copious plates of charcuterie and cheese plus a robust Provençal rosé.

The next day, a dramatic change in terrain was proof that we’d begun our descent towards the Mediterranean. Walking through cool forests of tall pines and majestic oaks, we begin to notice the scrubby garrigue typical of the coastal inlands and kept our eyes open for Sainte-Agnès, our destination for the night, which we were convinced lay far below. 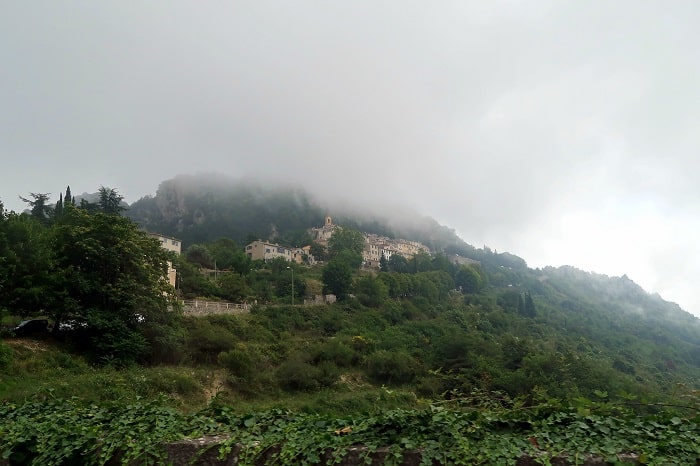 A village far in the distance, crowned by a stony cliff top, caught our imagination. After wondering what this lovely apparition could be, for a full three hours, it finally dawned upon us that this was precisely where we were headed!

We enjoyed every step of the steep walk, up vertiginous stone paths to beguiling Sainte-Agnès – it was the prettiest approach thus far. The rocky cliffs atop the village which we’d spied from afar turned out to be the ruins of a 9th-century château on the highest fortified peak in Europe. From there, the teeming Riviera and the Mediterranean lay before us, golden and azure, and we had the slightly melancholic feeling that we were leaving our peaceful mountain refuge behind. 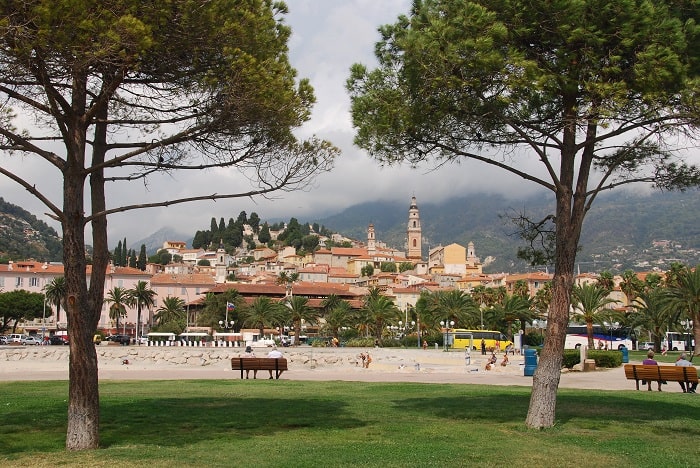 We departed lofty Sainte-Agnès for charming Gorbio by taxi, saving ourselves for the long coastal walk from Roquebrune-Cap-Martin to Menton, our final destination. Occupying another nearly vertical setting, Roquebrune is clearly a full-blooded Mediterranean town – with the Italian restaurants, lemon trees and pots of lavender to prove it. The 10th-century ramparts of the town’s château provided excellent views of yachts in Baie de Roquebrune, with Monaco’s incongruous skyscrapers in the distance.

Besides missing a tour of Le Corbusier’s cabanon (summer retreat), which was closed for renovations, the six-kilometre walk along from Roquebrune to the wide beaches of Menton was a Mediterranean dream. The plush Hôtel Princess et Richmond had a terrasse overlooking the beach so it seemed only fitting that we close our trip with a bottle of Champagne at sunset, while gazing out at the shimmering sea.

On Foot Holidays: Complete walking tours of the Alpes-Maritimes, and many other glorious regions of France and Europe. Each tour includes detailed maps, all hotel arrangements and the transport of luggage between destinations. Tel: +44 1722 322652. www.onfootholidays.co.uk 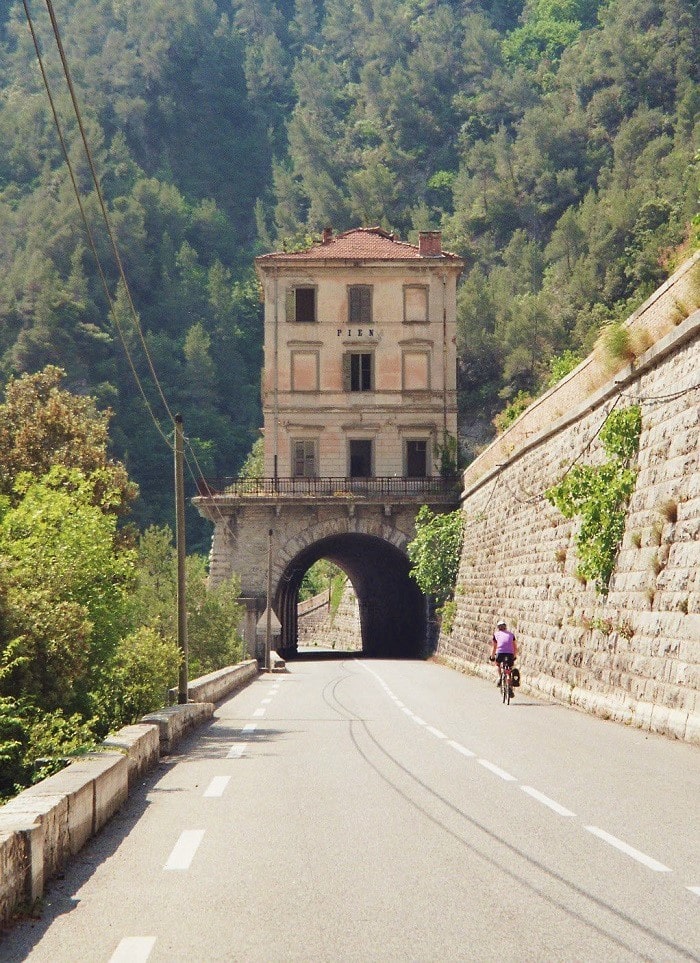 Previous Article Customized Trip Itineraries with France Luxury Tour
Next Article Art in Aix: The Collections of the Prince of Liechtenstein at Caumont Centre d’Art